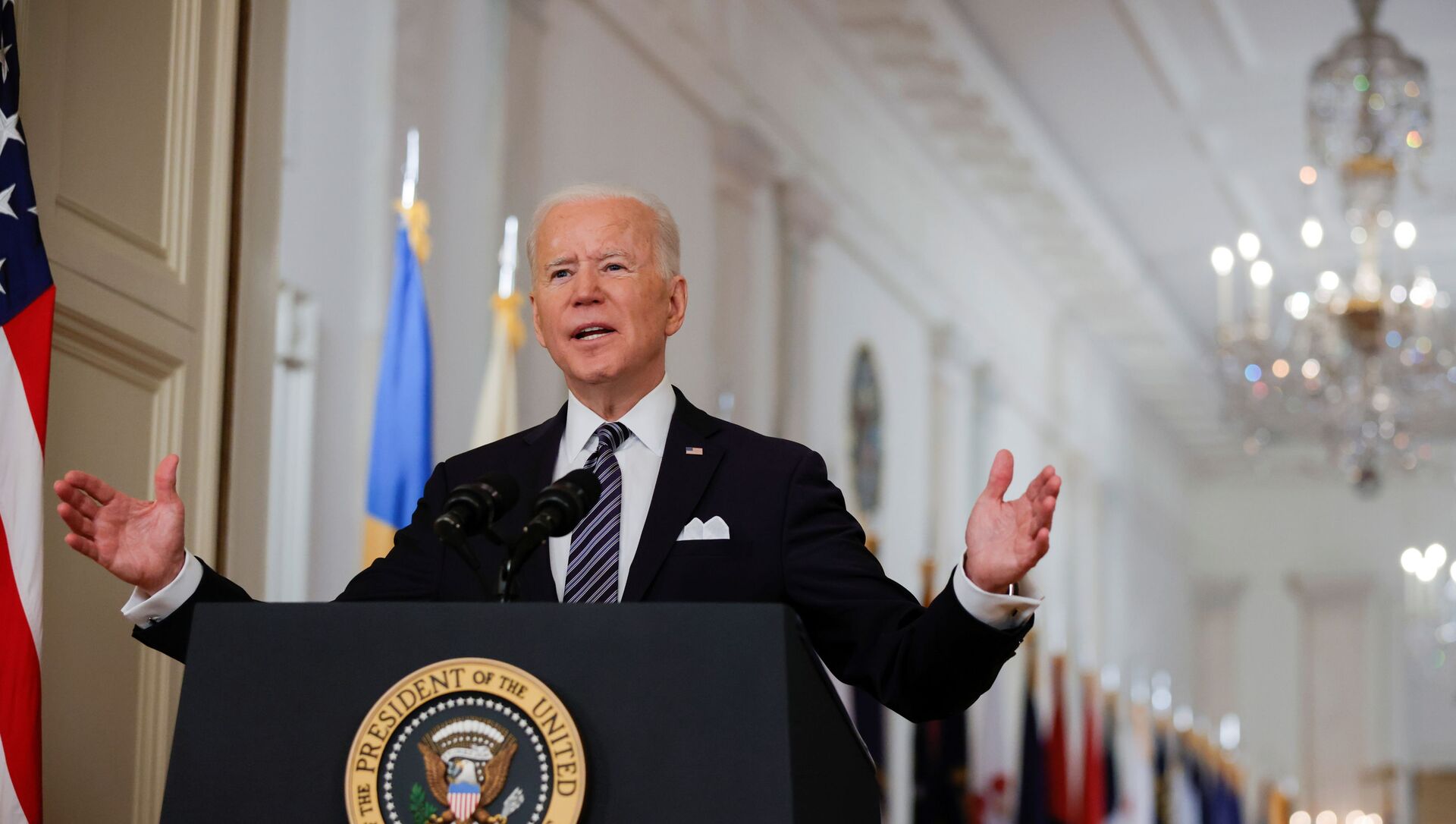 Svetlana Ekimenko
All materialsWrite to the author
Joe Biden, in his first prime time speech, urged Americans to "stick to the rules", noting that the fight against the coronavirus is "far from over", promised that the country will come out of the COVID-19 pandemic "stronger", after earlier signing his $1.9 Trillion American Rescue Plan into law.

I made the mistake of putting on fox business pic.twitter.com/UsuFo2JCBM

​Domench, who publishes the conservative online political magazine The Federalist, put in an appearance on Fox Business to tear into the Democratic President’s prime time address to the nation from the White House to commemorate the one-year anniversary of the COVID-19-induced shutdown.

“This is another garbage speech full of lies from a senile person who thinks they're charge of America but actually isn't running anything,” said the American blogger, editor and television commentator.

TIME "Watch: In his first prime-time address to the nation, President Biden outlines a plan to make all adults eligible for vaccines “no later than May 1" https://t.co/yDCsUfoFm1 pic.twitter.com/yQ979o5gLi"

​In his speech on 11 March Joe Biden announced he would direct states to make all adult Americans eligible to get vaccinated, in other words, not suffering from any chronic illnesses, by 1 May, while also predicting a possible return to normal post-pandemic life by the Fourth of July.

“I'm not going to pretend otherwise. I mean, the reality is that this guy who has been trolled out to us as being president of the United States except for the fact that he hasn't taken a single question for 50 days,” continued Domench.

The speech, coming directly after Biden signed a $1.9 trillion COVID-19 relief package into law, was decried by the pundit as an attempt to "defend a massive expenditure of taxpayer money but something that is also not targeted in any real way".

A chorus of critical voices similarly accused Joe Biden of alleged lying about the bill, which they claim "has little to do with COVID relief”.

“We've been inundated with polling that claims the American Rescue Plan is overwhelmingly popular, so why go to such lengths to sell it now? Because the word is out -- the $1,400 check is not going to lift anyone out of poverty, despite slobbering to the contrary.”

Meghan McCain, the daughter of late Sen. John McCain and co-host of The View, levelled scathing criticism at Biden's Independence Day comments, when he urged Americans to show perseverance in fighting the coronavirus, as life could begin to return to ‘normal’ by 4 July.

McCain mockingly tweeted that if the coronavirus pandemic, indeed, ended by the Fourth of July “there won't be a firework left in this entire country” as she would have used them all up in celebration.

If this virus is over by the Fourth of July - there won't be a firework left in this entire country because I will have bought them all and lit them off my roof with an American flag bandana. pic.twitter.com/7EuOoZ9CAx

​Other conservative commentators levelled criticism at Biden for failing to acknowledge the role his predecessor Donald Trump had played in moving the nation towards recovery from the pandemic.
Sean Hannity stated on Fox News:

“Joe, you want unity? Why don't you just thank Donald Trump? You want us all to get along, you say. No Trump, no vaccine, Joe. Stop trying to take credit for something, frankly, you had nothing to do with. Nothing.”

Meanwhile, blogger Katie Pavlich went on Twitter to decry Biden’s “taking credit for the vaccine” after the administration of the former president established Operation Warp Speed last April to facilitate the development, manufacturing, and distribution of COVID-19 vaccines.

Biden taking credit for the vaccine is just absolutely astonishing, but not surprising.

Other critics have weighed in on the fact that halfway into his first 100 days, President Joe Biden has yet to hold a formal, solo news conference.

According to Ben Domenech, speaking on ‘Fox & Friends,’ the issue is “really concerning”, as it seemed to indicate that the Democratic President’s ‘White House handlers’ don’t think this is ‘something that he ought to do’.
The blogger questioned Biden’s ‘ability to follow questions’ and whether he was ‘really in charge’ of the situation.

Biden has participated in just one extended question-and-answer exchange with the press, for 21 minutes on his fourth full day in the job, reported ABC News.

It’s been 42 days and Joe Biden still refuses to hold a press conference.

Why is he so afraid of answering questions?

​Republican Chairwoman Ronna McDaniel echoed the sentiments on Twitter, posing the question,“Why is he so afraid of answering questions?”