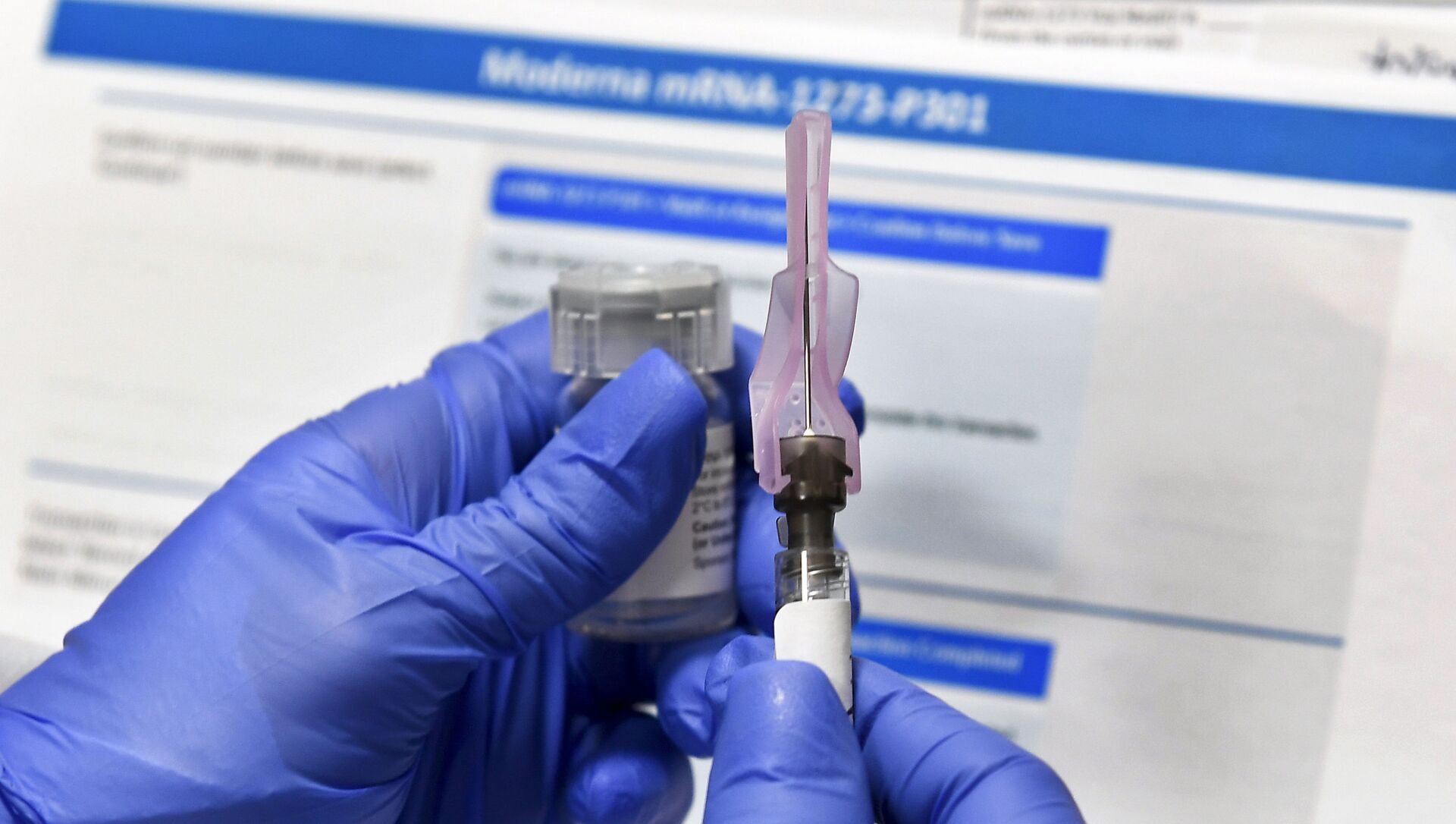 BRUSSELS (Sputnik) Luc Rivet - The European Union, currently going through a spat with UK-Swedish drugmaker AstraZeneca over delayed vaccine shipments and over exports to countries outside the bloc, is looking for some other opportunities to import COVID-19 shots.

The EU is now competing with the United Kingdom and the United States in order to get vaccine doses first, with each side trying to keep the production on its soil in a bid to secure doses for its own population.

At the same time, despite the principle of leading a single policy and the official motto "ordering together, we are stronger," many EU member states, including Austria, Hungary, Denmark, the Czech Republic, and Slovakia, are trying to get vaccines some other way, turning to Russia, China, or both.

In a global race to secure enough vaccine doses at the earliest, Israel and the UK were the best examples of well-understood selfishness. Thus, Israel concluded an early agreement with Pfizer to be the "test box" for the US producer and paid 40 percent more in exchange for priority delivery, while London made orders early, regardless of the price and conditions, to be sure of having the vaccines. Brussels, in turn, tried to negotiate the best possible price, which dragged on the talks and resulted in badly written contracts that can do nothing with the vaccine shipment delays.

States Need to Be Selfish and Prompt to Serve Their People

The current situation with vaccinations in the UK and the EU, more specifically, in France, clearly demonstrates that the bloc has failed so far to develop and implement an effective policy to fight the pandemic. These are several examples. While the first vaccine — the one developed by Pfizer — was approved by Public Health England on 2 December, the EU regulator, as well as France, greenlighted it in late December. The AstraZeneca vaccine was approved by London on 30 December and by the EU on 29 January, as the latter doubted its efficacy for senior citizens.

This also explains why to date the United Kingdom has vaccinated 23 million people and France only 4 million, as well as why the vaccination pace within the EU is considerably slower compared to the US, the UK and Israel.

In addition, though European countries such as Germany, France or Belgium, have doses in freezers, logistics failures and bad choices, such as keeping doses in reserve for the second vaccination, have led to exasperation among citizens.

Given the poor results of the vaccination campaign in the EU, the bloc turned to its new regulations allowing exports to be stopped if a vaccine manufacturer has failed to meet its obligations to the bloc. Thus, Italy, in accordance with Brussels, blocked a shipment of 250,000 doses of the AstraZeneca/Oxford vaccine to Australia, as the UK-Swedish drugmaker delayed vaccine deliveries to the bloc.

Thus the discrepancy between lagging Europe and triumphing Britain would be a fantastic advertisement for more "exits" from the EU.

This week, the series of attacks and counterattacks continued, as on Tuesday European Council President Charles Michel lamented London for blocking the export of vaccines and vaccine components produced on its territory to the bloc. Michel also noted that the EU — recently accused of "vaccine nationalism" and protectionism — has never stopped exporting vaccines and authorized almost all laboratory export requests.

UK Prime Minister Boris Johnson strongly refuted this accusation, stressing that the UK could be "proud" of its vaccination program and contribution to the COVAX vaccine distribution mechanism.

"Let me be clear, we have not blocked the export of a single COVID-19 vaccine or vaccine components. This pandemic has put us all on the same side in the battle for global health. We oppose vaccine nationalism in all its form ... I trust that all sides of the House [of Commons] will join me in rejecting this suggestion and calling on all our partners to work together to tackle this pandemic," Johnson told the UK Parliament.

Faced with the UK's denial, the European Council chief made a U-turn and declared that he was pleased the row had led to a "new transparency."

The EU official's statement was confirmed later this week, as The New York Times newspaper revealed some internal documents saying that the bloc has delivered 34 million doses of coronavirus vaccines to dozens of third countries, including nine million to the UK, in recent weeks despite an internal supply crisis and the export control mechanism applied since early February.

Still, despite the propaganda calls by Michel, a first shipment by AstraZeneca to Australia of its coronavirus vaccine produced in Italy was stopped by Rome with the blessing of Brussels.

Is 'Vaccine Nationalism' Good For Europe?

Consultancy portal OurWorldInData tracking vaccines' roll-out across the world shows that Europeans have reason to be nervous about the lack of progress of their vaccination. An average of 6.5 percent have been inoculated compared to 18 percent in the US and 33 percent in the UK.

"Ursula von der Leyen, the president of the European Commission, is quite bitter. She does not want to carry the hat of this new logistics crisis in the COVID saga," an EU diplomat told Sputnik.

One of the reasons for such low numbers of inoculations could be mass exports, as reported by the New York Times newspaper earlier this week. Whether to reveal how many vaccine doses the bloc exported to third countries has been hotly discussed in the corridors of the European Commission, but the officials failed to reach a consensus on the matter.

"The deciders at the Commission hesitate to inform the public in detail of the number of vaccines exported from production units situated in the 27 member states to third countries. They are afraid of outrage and one more backlash by the people. This is, unfortunately, not very democratic for the bloc, which is prompt to give lessons of human rights and democracy to the whole world and apply sanctions; refraining from telling their people what is the simple truth, sounds like lying by omission. Does it exist, fake news by omission?" the EU diplomat added.

Meanwhile, some other officials in Brussels believe that the EU keeping borders open for exports of vaccines, on the contrary, would enhance Europe's image as "the lighthouse of democracy," the diplomat said.

Commenting on the EU's vaccine policy, Alexander Gauland, a co-chairman of the AfD parliamentary group in the German Bundestag, told Sputnik that the bloc's failure to implement an effective vaccination campaign is to be blamed on German Chancellor Angela Merkel and her ideologically driven policy.

"In view of the EU's failure to vaccinate, advances such as those from Hungary buying from other sources or from Austria and Denmark striking an alliance to develop a vaccine with Israel, are only logical. The main responsibility for the European vaccination disaster lies with the German chancellor ... It was she who insisted against better advice that the EU should organize vaccine procurement. The fact that the inefficient EU bureaucracy is not capable of this to a sufficient extent was ignored for ideological reasons," Gauland said.

According to the lawmaker, a more promising vaccine alliance between Germany, France, Italy and the Netherlands, initiated in the summer of 2020, was not pursued at the instigation of the chancellor, while national efforts have been denigrated as "vaccination nationalism" and rejected.

"The chancellor's ideologically driven policy against all common sense has once again seriously damaged Germany and Europe," the politician concluded.

Thierry Mariani, a French member of the European Parliament, in turn, told Sputnik that it was normal that sovereign states sought to think of their citizens first in such a situation when the EU's principle of leading a single policy failed, adding that the pandemic has considerably developed an "every man for himself" attitude.

"Economic Free Trade cannot resist when a nation is in danger. It is normal for sovereign states to think of their citizens first. The European Union failed in its vaccine ordering and is now rowing to avoid having to admit failure," Mariani said.

The politician added that Europe was now ready to do anything to disguise its deplorable management of the pandemic, gradually losing its democratic nature and abandoning transparency in actions.

"Brussels is more and more comparable with the Soviet Union. Europe is no longer democratic. It is an administrative superstructure that despises its parliament and does not feel the need to inform transparently on the progress of vaccination," Mariani concluded.

Given that Europe is the continent where most vaccines are being massively produced, the EU simply cannot stop all exports. However, to ensure that drugmakers will not leave the bloc without vaccines, the EU implemented a new mechanism, under which each pharmaceutical company producing vaccines in the EU needs to request permission to ship the doses overseas.

After the first shipment to third countries was banned, the European Commission was accused of applying a sort of vaccine nationalism. Brussels responded by saying that its policy is only about forcing big pharma to be transparent.

Commenting on the EU's actions taken to ensure vaccinations, Marc Van Ranst, a virologist and professor at the KU Leuven university, told Sputnik that Europe should not focus only on its member states but think of third world countries where vaccination has not started yet.

"Europe can not be selfish. We must also think of Africa and the third world, where vaccination has not even started yet. We must work in parallel with the United Nations and the WHO [the World Health Organization]. Do not forget that the raw material supply chains for the production of vaccines are global. Laboratories and production units in Europe, import components from tens of countries in the world. We are interdependent, and it is practically impossible to be ‘nationalistic,'" the expert said.

According to the virologist, the EU is better off not triggering a vaccine trade war, as it would definitely lose it.

The specialist also noted that the usual "blame game," when national governments put the responsibility for all wrong decisions and failures on Brussels, must stop, adding that it is counterproductive.

With the supply crisis going on, some member states lose trust in Brussels and decide to make early orders separately. Thus, Hungary turned to Russia and China in a bid to ensure a sufficient number of vaccine doses. As a result, the country has the best results in the EU in terms of vaccinated people, far ahead of all the heavyweight EU countries.