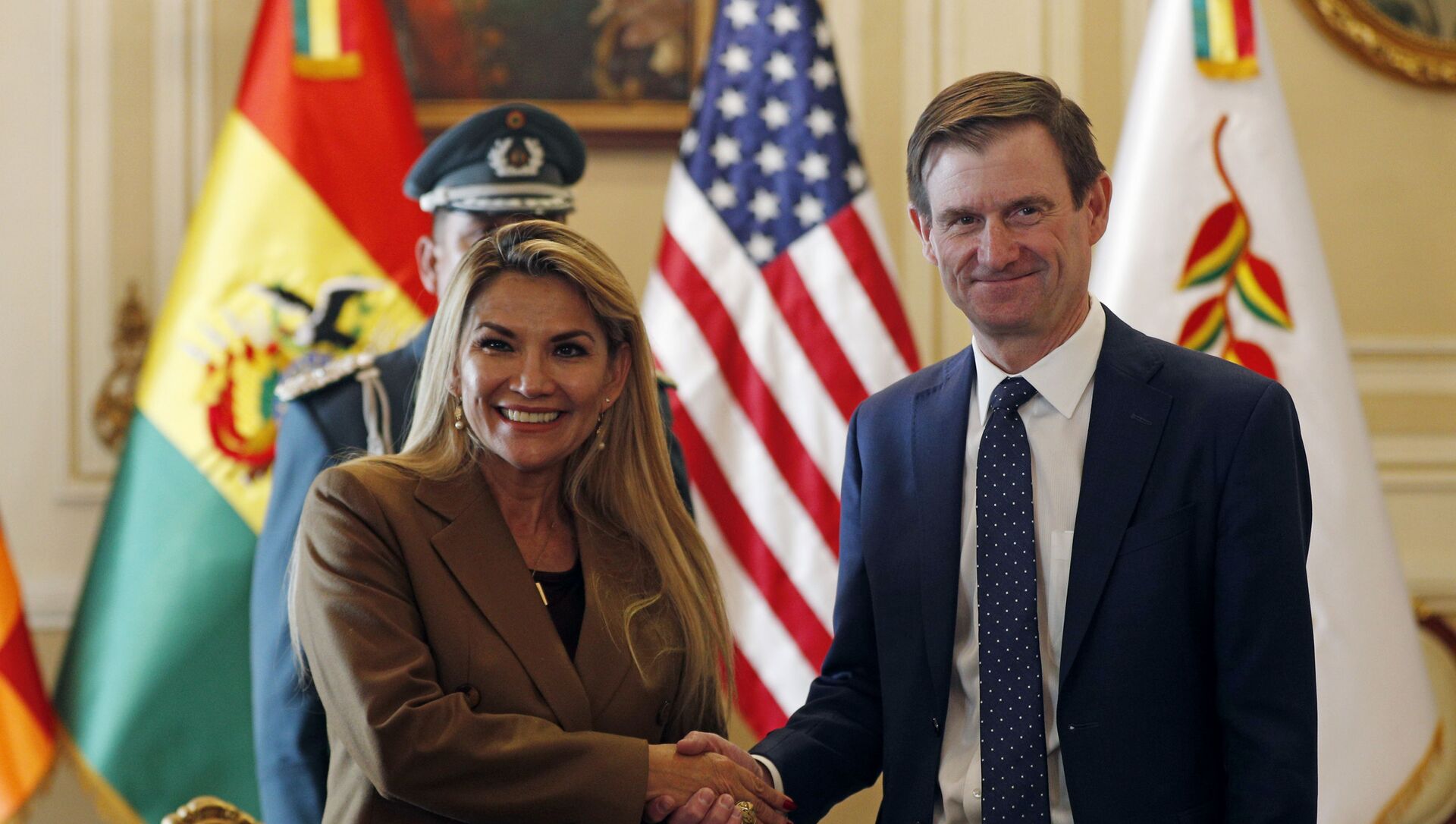 Morgan Artyukhina
All materialsWrite to the author
Last week, Jeanine Añez, the former self-proclaimed interim president of Bolivia, refused a summons to meet with the state prosecutor in her home province of Beni, paving the way for her arrest for giving security forces a "license to kill" protesters who challenged her interim government's rule in 2019 and 2020.

A Bolivian court has issued arrest warrants for Jeanine Añez, the former interim president who seized power in a coup d'etat in late 2019, alongside several of her senior ministers, warning they are a "flight risk."

According to the court filing shared by Bolivian news outlet Kawsachun News, Añez and nine other senior officials from her administration are charged with terrorism, sedition and conspiracy.

BREAKING: Bolivia's courts have ordered the arrest of former coup President Jeanine Añez and her most senior Ministers, as they are considered a 'flight risk'.

This comes as part of the investigation into the US-backed coup in 2019. pic.twitter.com/dJ1BeQDdET

In response to the arrest warrants being issued, Añez took to Twitter on Friday to beg for support.

​"The political persecution has begun," she wrote. "The MAS has decided to return to the styles of the dictatorship. A shame because Bolivia does not need dictators, it needs freedom and solutions."

Rise and Fall of the House of Añez

A former senator from the lowland Beni region in northeastern Bolivia, Añez rose to power in the chaos of November 2019, when a coordinated campaign by domestic and international forces attempted to void the re-election of MAS leader and then-President Evo Morales the previous month. After right-wing militias and sympathetic police forces locked out MAS lawmakers and Añez found herself the head of a rump parliament, she declared herself the interim president on November 12.

US media and the US government both provided support to the anti-MAS forces in the country, with then-US President Donald Trump and allies like Brazilian President Jair Bolsonaro quickly extending recognition to Añez's declared interim government. However, after months of claiming Morales had stolen the vote, US papers like the Washington Post were forced to admit that the Organization of American States report underpinning those claims was "deeply flawed."

“There is not any statistical evidence of fraud that we can find - the trends in the preliminary count, the lack of any big jump in support for Morales after the halt, and the size of Morales’s margin all appear legitimate,” the Post wrote in February 2020, after months of street violence between Añez's police and military forces and the indigenous-led protests against them had solidified her rule. 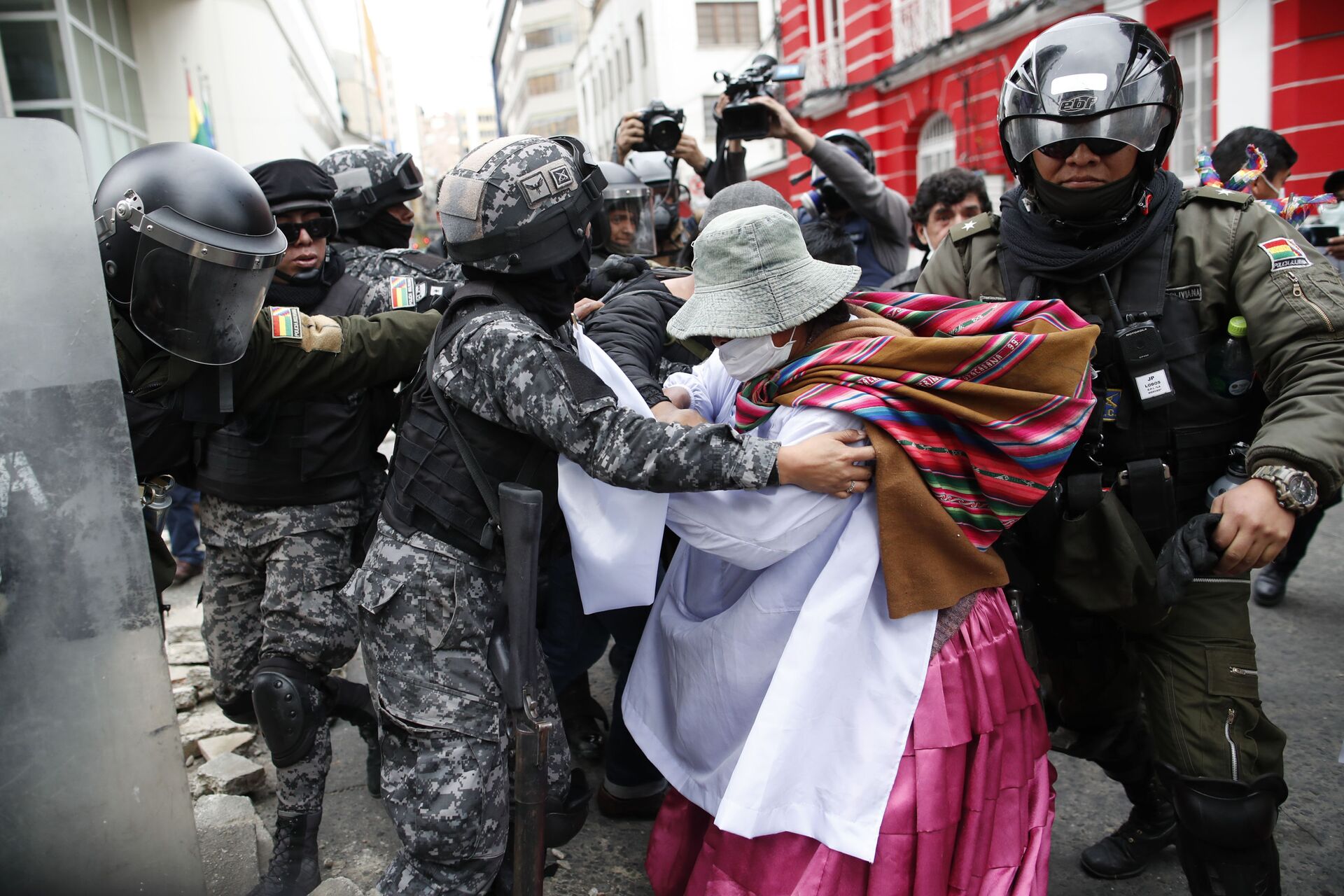 A backer of former President Evo Morales scuffles with police in La Paz, Bolivia, Wednesday, Nov. 13, 2019. The opposition senator who has claimed Bolivia's presidency Jeanine Anez, faces the challenge of stabilizing the nation and organizing national elections within three months at a time of political disputes that pushed Morales to fly off to self-exile in Mexico after 14 years in power.
© AP Photo / Natacha Pisarenko

New elections were originally slated for May 2020, but after the spread of the COVID-19 pandemic earlier in the year, Añez's government repeatedly postponed the elections until ten days of mass demonstrations forced it to commit to October 18. Ironically, the leading contender in the race was the MAS candidate Luis Arce, who swept the October elections with 55% of the vote.

In the weeks that followed, the new Plurinational Legislative Assembly, Bolivia's parliament, issued indictments for Añez in connection with a series of massacres of protesters by police under her watch. She and 11 of her then-ministers were implicated in massacres in the indigenous-majority communities of Senkata, Sacaba and Yapacani and accused of genocide for giving police a "license to kill."

Last week, she refused a summons to meet with the state prosecutor in Beni on pain of arrest.