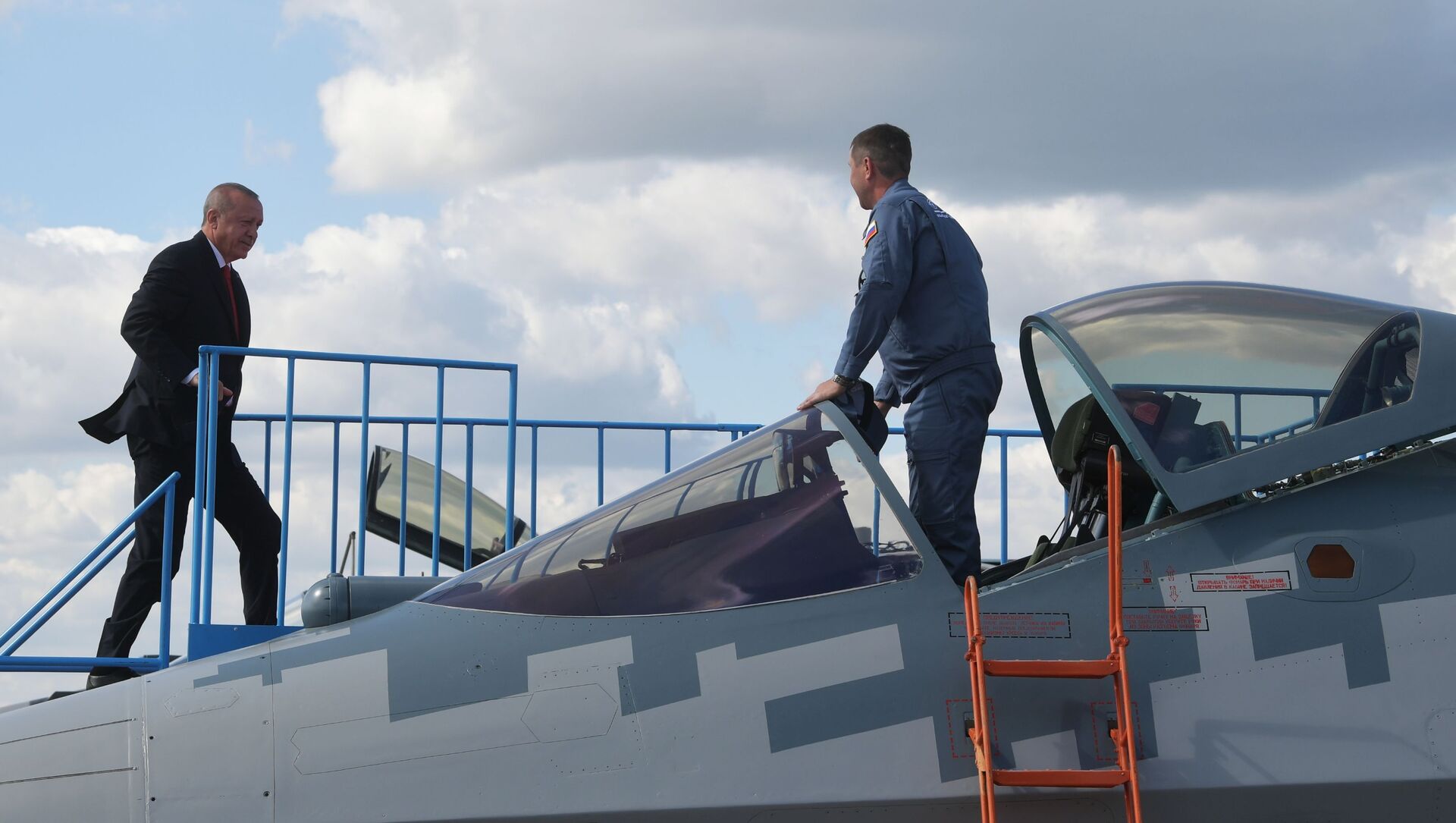 Ilya Tsukanov
All materialsWrite to the author
Turkish officials first began hinting at an interest in Russian military aircraft, including the Sukhoi Su-35 4++ generation fighter and the fifth generation Sukhoi Su-57 jet, after Ankara was kicked out of Lockheed Martin's F-35 programme over its purchase of a Russian-made air defence system.

Turkey has not ruled out the possibility of purchasing Russian-made Su-35 and Su-57 fighter jets, although it prioritises the creation of its own, domestically-developed next-gen fighter, Industry Minister Mustafa Varank has announced.

"If Russia has an aircraft that meets our current needs, if there are no difficulties with introducing it into our system and launching it, then we can certainly purchase it from Russia or some other country in Europe. Our approach to this issue is not categorical and antagonistic," Varank said, speaking to Sputnik Turkey on Thursday.

The subject of the potential sale of Russian fighters to the NATO nation is brought up regularly at meetings been the two country's leaders, the minister added.

"Of course, we prioritise development of Turkey's capacities related to fifth-generation fighters. But if Russia has an aircraft that meets our needs and goals, Turkey will purchase it," Varank said.

The minister also confirmed that negotiations regarding a second batch of S-400s for Turkey are ongoing, and that Turkey is interested in technological cooperation and the possibility of partial localised production.

Erdogan Slams Canada's Suspension of Drone Tech Sales to Turkey as Violation of Spirit of Alliance
Asked to comment on Washington's decision to kick Turkey out of the F-35 programme, Varank said that the move has actually prompted Ankara to mobilise its domestic military industry, including in the aviation sector, to advance projects such as unmanned aerial vehicles. Additionally, Turkish Aerospace Industries continues its work with Britain's BAE Systems on the development of a next-gen 'National Combat Aircraft' project, also known as the TF-X (Turkish Fighter - Experimental).

Varank says the country's goal is to achieve 100 percent self-sufficiency in the defence sector, and estimates that localisation has been increased from 20 to 70 percent.

Ankara was dropped from the US-led F-35 programme in July 2019 over 'security concerns' associated with its purchase of Russia's S-400 air defence system. Turkey insists the Russian system poses no threat to US or NATO security. Along with the F-35 cancellation, the US has also sanctioned the Presidency of Defence Industries - a Turkish government agency responsible for coordinating the country's defence sector. Last week, the chief of the agency said Ankara has not yet felt any impact from Washington's sanctions.

In January, an official from Russia's federal military-technical watchdog confirmed that talks on the sale of another batch of S-400s to Turkey had entered an advanced stage. For the moment, it remains unclear whether Moscow will agree to Turkish requests regarding joint production and technology transfer of the advanced air defence system, given Ankara's continued membership in NATO, as well as differences in a number of regional conflicts, including Turkey's continued occupation of parts of Syria, a Russian ally in the fight against jihadist extremism.