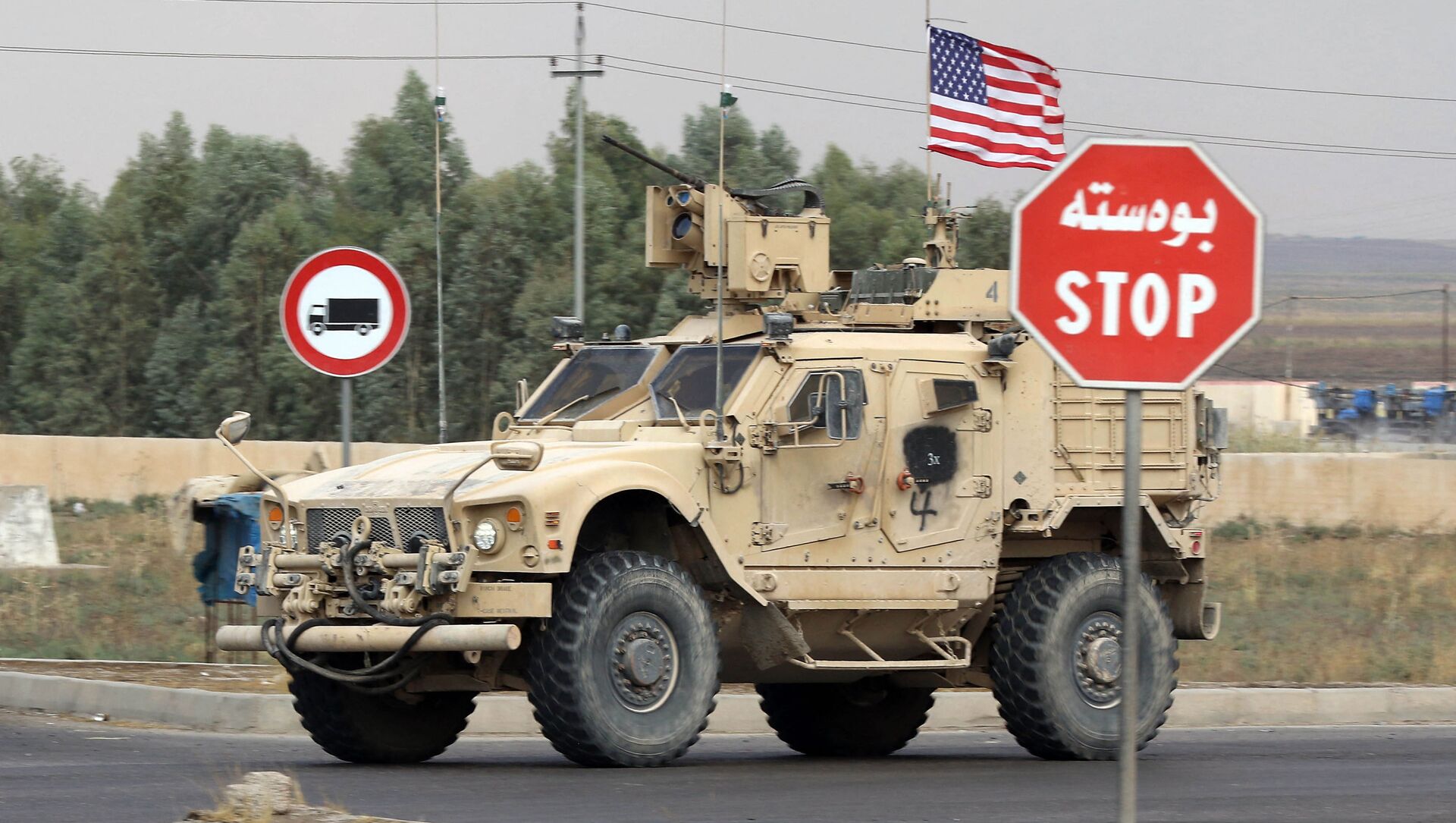 © AFP 2023 / SAFIN HAMED
Subscribe
International
India
Africa
Ekaterina Blinova
All materialsWrite to the author
Despite Secretary of State Antony Blinken's pledge to halt costly interventions and regime change operations, the US continues its military buildup in northeastern Syria. According to security analyst Mark Sleboda, one may expect the US to step up funding jihadi proxy ops in Syria and play the chemical weapons card to oust President Bashar Assad.

On 3 March, the White House said it wasn't ruling out new "calculated, proportionate" US airstrikes in response to a missile attack on the Al Asad air base in Iraq's Anbar Province earlier in the day. "If we assess a further response is warranted, we will take action again in a manner and time of our choosing", press secretary Jen Psaki said.

Last Wednesday's strike, which claimed no lives except for one contractor who died of a heart attack, came two days before Pope Francis' official visit to Iraq.

On 25 February, the Pentagon shelled the purported positions of an Iraqi Shia militia in eastern Syria, following a 16 February strike in northern Iraq that killed a civilian contractor and injured a US servicemember.

Why Syria Was Chosen as a Target

It's highly likely that the Biden administration's next strike will target Syrian territory again, suggests Mark Sleboda, a US military veteran and international affairs and security analyst, outlining his vision of the strategic balance of power in the region.

"The Biden administration launched 'retaliatory airstrikes' against a group of Iraqi Shias in Syria, namely the militia groups Kataib Hezbollah and Kataib Sayyid al-Shuhada - who have previously been de facto allied with the US in the fight against ISIS* and al-Qaeda* in the region – groups that the US government knew were almost certainly not responsible for the most recent attacks on their occupation forces in Iraq, largely out of domestic political concerns", he says.

One glaring example of the domestic outcry is a 22 February NBC News' op-ed by Mark Dubowitz, CEO of the Foundation for the Defence of Democracies, who argued that the Biden administration is appeasing Tehran by not striking back at "Iran-backed" Shiite militias in response to earlier rocket attacks. "Biden's approach draws directly from Obama's playbook: turning a blind eye to regional aggression and offering economic relief to signal support for engagement", the article claimed.

"The Biden administration felt domestic political pressure to 'hit someone back'. Anyone. It didn’t really matter who", Sleboda notes. "The US government still does not know who precisely was responsible for the most recent small partisan-style attacks on their occupation bases".

"US troops are vulnerable to Iran-linked militias because they are occupying Iraq. They are lingering there nearly two decades after an invasion and forcible regime change, which are almost universally agreed to be severe mistakes..." @bonniekristian https://t.co/7be6rG8Hop

​Although a largely unknown small new Shia militia group, Saraya Awlia al-Dam (The Guardians of Blood Brigade), has claimed credit for the February strike, the Biden administration picked Kataib Hezbollah and Kataib Sayyid al-Shuhada – "who are sympathetic to Iran and generally opposed to the US military presence in their country" – as the most convenient targets for its punitive attack, according to the security analyst.

One might ask why the US chose Syria as the place for its retaliatory strike rather than to attack the aforementioned groups in Iraq. The crux of the matter is that "the decision was explicitly made… as a 'de-escalation measure' meant to try to minimise the generation of even more anti-US sentiment from other Iraqis", Sleboda explains.

"This tells us beyond a shadow of a doubt that Syria will be targeted again by the United States", the US military veteran says. "Whatever the Biden administration plans are for its US military occupation in Syria and dealing with the Syrian government in Damascus, this shows that the current US government considers Syria to not have any sovereignty as far as its own actions are concerned, just as the last two US presidential administrations have done, and that Syria is a 'black space' on the map where any military aggression is allowed it". In this photo released Wednesday, Feb. 12, 2020, by the Syrian official news agency SANA, Syrian government soldiers on a tank hold up their rifles and flash victory signs, as they patrol the highway that links the capital Damascus with the northern city of Aleppo, Syria. The M5 highway, recaptured by President Bashar Assad’s forces this week, is arguably the most coveted prize in Syria’s civil war. The strategic highway is vital for Syria’s economy as well as for moving troops.
© AP Photo / SANA

Meanwhile, the US continues to beef up its military presence in northeastern Syria. On 6 March, four US aircraft, including two helicopters, landed inside the US Army base in Al-Shaddadah, a town in the southern al-Hasakah Governorate, according to the SANA news agency. The choppers reportedly carried US military personnel and 20 wooden boxes containing thermal missiles.

On 22 February, The Drive wrote that trucks carrying Avenger short-range air defence systems were reportedly spotted on a highway heading from the Iraqi city of Ramadi to the Syrian border, referencing photos that had earlier surfaced on social media.

Avenger will likely be used to provide air defense for U.S bases in the north ofSyria pic.twitter.com/zuki42noye

​Earlier that month, Marine Gen. Kenneth McKenzie Jr., head of the US Central Command, complained that cheap and commercially available drones instrumentalised by America's adversaries had become the most "concerning tactical development".

"There is always the possibility that continued US military occupation and aggression in Syria could at any time ignite and expand into a larger regional conflict", says Sleboda. "The Biden administration has been giving mixed signals about whether it will resume active military regime change operations against the Syrian government in Damascus or continue to rely on its existing economic stranglehold of its sanctions and military occupation of resource-rich east Syria".

You can thank US sanctions and the occupation of Syria’s most productive land for this one. https://t.co/aZgZZjPT9f

​Sleboda suggests that the Biden administration "will try to dance around and avoid any direct military action against Russian military forces" which have been operating in Syria since 2015 at the invitation of the Syrian government. Russia's presence in the region "will limit the potential for a wider regional escalation", according to the US military veteran.

In addition, the security analyst does not rule out the White House also using the chemical weapons pretext to keep demonising Russia and step up efforts to oust Syrian President Bashar al-Assad.

On 4 March, Linda Thomas-Greenfield, the new US envoy to the United Nations, accused Russia of "blocking efforts" to hold the government of Syrian leader Bashar al-Assad accountable for its alleged use of chemical weapons during the Syrian civil war. Russia's UN Ambassador Vassily Nebenzia retorted that some countries have been repeatedly using the chemical weapons "card" as a tool to exert pressure on the Syrian government. According to Nebenzia, these countries "reject the counter-arguments provided not only by Russia and Syria, but also by independent experts and organisations, and do not give any coherent explanation as to why they do so". One should not be deluded by Antony Blinken's vow not to "promote democracy through costly military interventions or by attempting to overthrow authoritarian regimes by force", notes the security analyst, adding that nothing has changed in the White House's approach towards Iraq and Syria since the Obama era.

Similarly, Sleboda sees the White House's statement that Biden is willing to work with the US Congress to repeal the 1991 and 2002 Iran authorisations as "nothing but cynical political theatre".

"The 1991 and 2002 so-called AUMF's for Iraq have been used as a perennially convenient fig leaf justification for US military aggressions across the entire Islamic World for the last three decades, with broad bi-partisan support", he says. "Congress by and large has no intent to and will not repeal these legal pretexts. They know that and the Biden administration certainly knows that. Statements about revoking it 'in cooperation with Congress' ensure that it is an impossibility".

*Daesh (ISIS/ISIL/Islamic State) and al-Qaeda are terrorist organisations banned in Russia and many other nations.