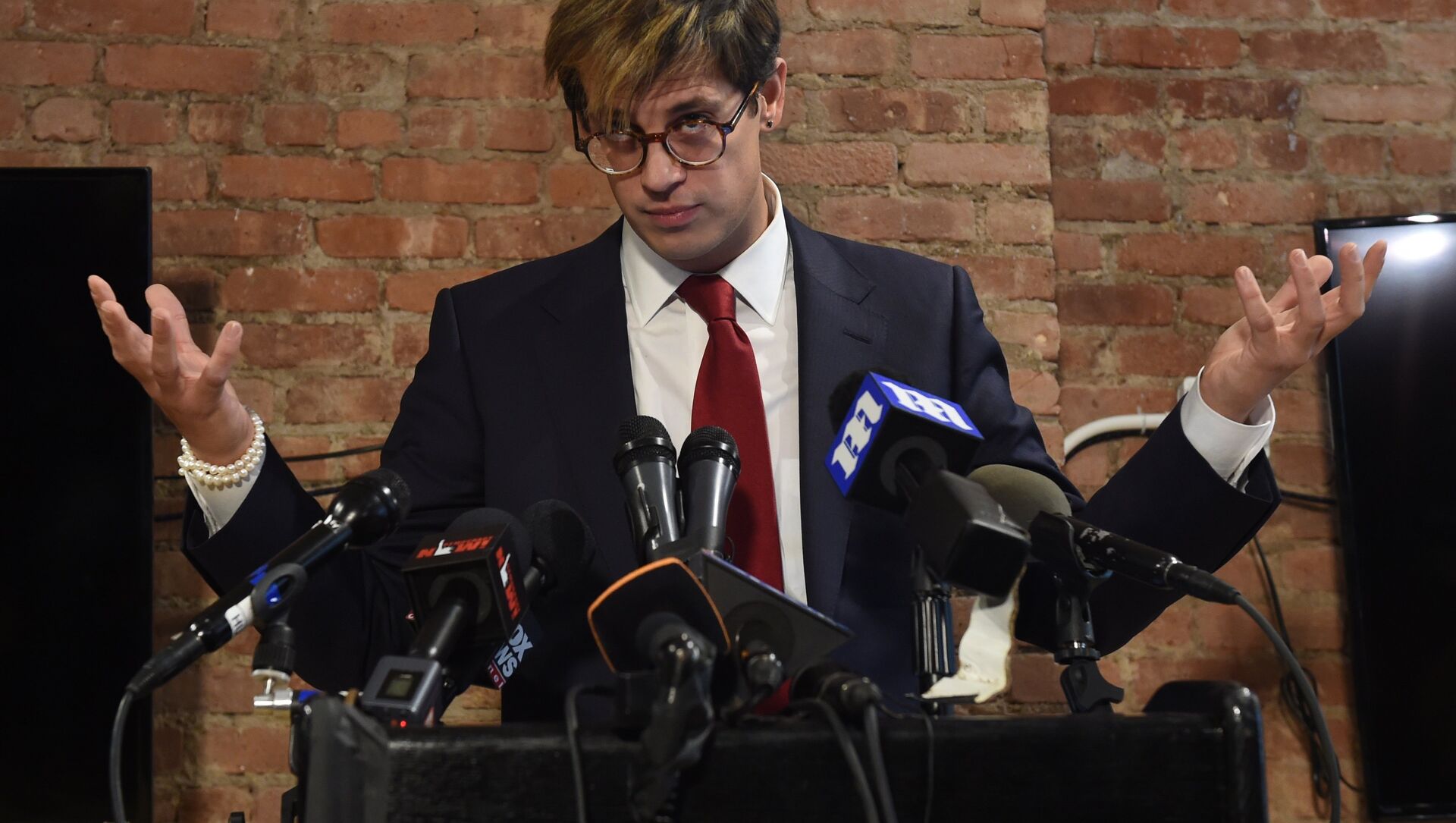 Max Gorbachev
All materialsWrite to the author
Yiannopoulos worked for two years as a tech editor at Breitbart News. He resigned after a video emerged where he seemingly spoke in favour of sexual relationships between men and younger boys. Together with other conservative activists he was banned by social media sites Facebook and Twitter.

Right-wing activist Milo Yiannopoulos, 36, has claimed that he is now "ex-gay" and "sodomy free". Speaking to a conservative website LifeSite, Yiannopoulos, who married his boyfriend in 2017, said he "wasn't entirely joking" when he said he became homosexual to torment his mother and "leaned" heavily into it, because it drove liberals crazy to see "a handsome, charismatic, intelligent gay man riotously celebrating conservative principles".

The British-born activist said he has now dedicated his life to St. Joseph, but said he fears that he will never be brave enough to make homosexuality a thing of the past. "I treat it like an addiction. You never stop being an alcoholic", he said.

He revealed that his husband has been "demoted to housemate".

How will the change affect his work? The activist revealed that over the next decade he wants to help rehabilitate "conversion therapy", which he said does work, "albeit not for everybody".

"As for my other aspirations and plans, well, no change: I've always considered abortion to be the pre-eminent moral horror of human history. I'll keep saying so — even more loudly than before", he said.

Who is Milo Yiannopoulos?

The right-wing activist had a brief career as a journalist. He worked at The Daily Telegraph and was tech editor at Breitbart News between 2015 and 2017. Yiannopoulos is best known for his harsh criticism of social justice warriors, feminism, and political correctness. His controversial statements on immigration and Islam sparked anger among the left and in 2017 a riot occurred on the University of California campus in Berkeley reportedly because Yiannopoulos was expected to deliver a speech there. According to city authorities, the riots caused up to $500,000 in damage.

That same year he resigned after a video emerged where he seemingly spoke in favour of sexual relationships between men and younger boys.

"You know people are messy and complex and actually, in the homosexual world particularly. Some of those relationships between younger boys and older men, that sort of coming of age relationships. The relationships with those with older men have helped those young boys discover who they are. And give them security and safety, provide them with love and reliable and sort of a rock. Where they can't speak to their parents", he said.

Announcing his resignation, the activist said that he was abused by two men when he was a teenager. One of the men was a priest, he claimed.