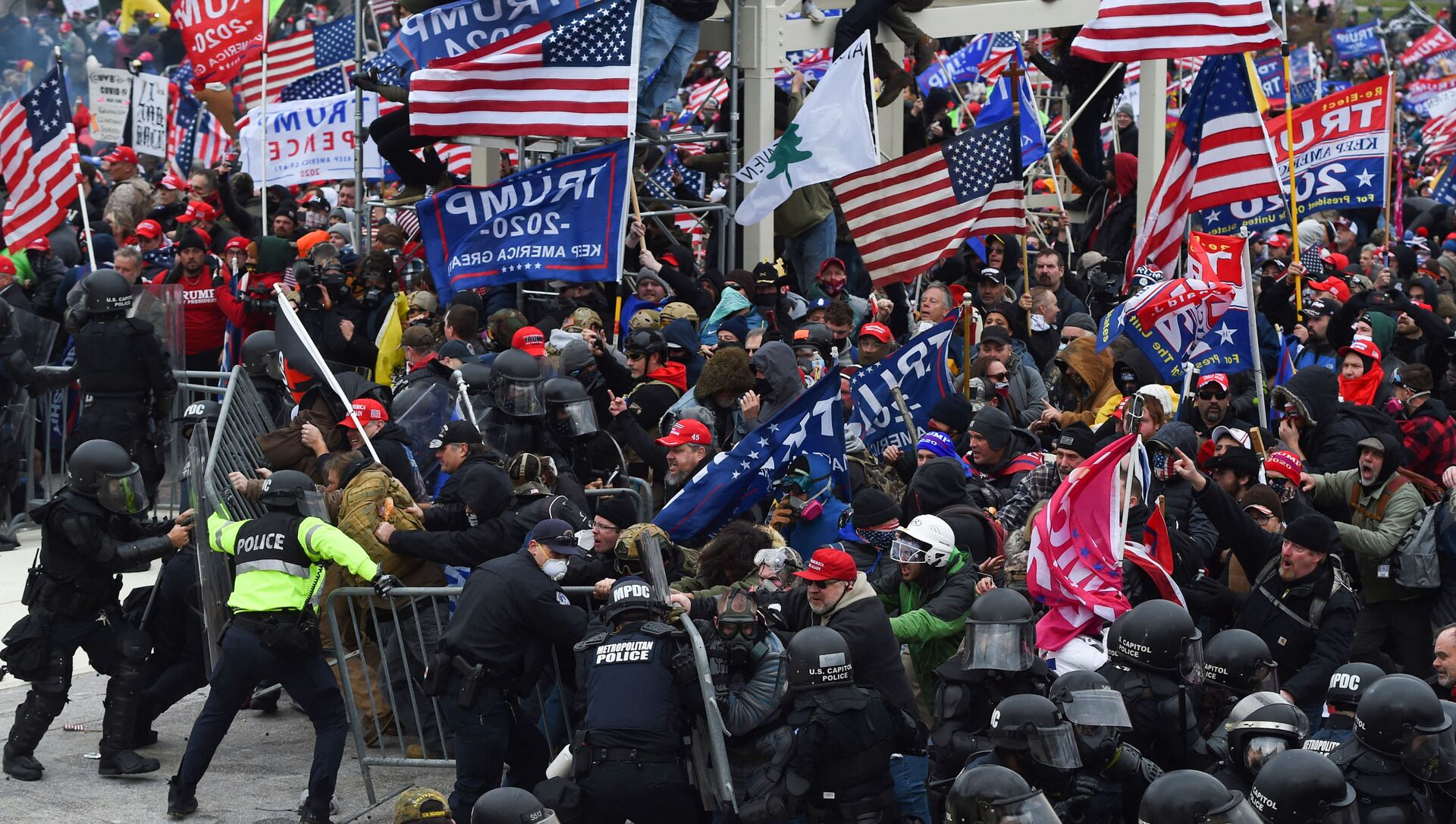 © AFP 2023 / ROBERTO SCHMIDT
Subscribe
International
India
Africa
Morgan Artyukhina
All materialsWrite to the author
Rumors of a potential new attack on the US Capitol on March 4 failed to materialize, but US troops remain in Washington, DC, in the aftermath of the January 6 attack that featured a number of armed and organized groups in support of then-US President Donald Trump.

According to a Monday filing in a US federal court, Stewart Rhodes, founder of the right-wing Oath Keepers militia movement, gave directions to members of the group while they were participating in the January 6 attack on the US Capitol.

The filing, which is aimed at keeping Rhodes in police custody until his trial, describes several texts sent through the encrypted messaging app Signal on January 6 in a group named “DC OP: Jan 6 21” that, according to prosecutors, included “regional Oath Keeper leaders from multiple states across the country.”

The court has blocked other such attempts to keep Oath Keepers in custody until their trial, but not for “QAnon Shaman” Jake Angeli, who featured prominently in the Capitol storming.

The prosecutors noted that “there is no discussion of forcibly entering the Capitol until January 6, 2021. However, there is talk about being prepared for violence.” However, they do discuss “coming to Washington, DC, for the events of January 5-6, 2021, to provide security to speakers and VIPs at the events.”

“The co-conspirators joined together to stop Congress’s certification of the Electoral College vote, and they were prepared to use violence, if necessary, to effect this purpose,” the filing states. “They were plotting to use violence to support the unlawful obstruction of a Congressional proceeding.”

According to The Hill, the document refers to Rhodes only as “Person One,” but prior documents have made clear that it refers to him.

Rhodes has claimed that the allegations are “total nonsense,” telling the Washington Post on Tuesday that “we no plan to enter the Capitol, zero plan to do that, zero instructions to do that, and we also had zero knowledge that anyone had done that until after they had done that — afterwards.”

Immediately prior to the attack on the Capitol, Trump hosted a “Stop the Steal” rally outside the White House at which he and other speakers gave dire warnings about what would happen if Democratic US President-elect Joe Biden were allowed to take office. Trump then urged them to take action to stop that from happening, including marching to the Capitol, where verification of the results of the November 2020 election that Biden had won was presently underway. Trump claimed Biden’s victory was fraudulent and that he was the true winner.

“We are surging forward. Doors breached,” Thomas Edward Caldwell, a former US Navy officer and FBI section chief who has come to occupy what prosecutors described as a “leadership role” in the Oath Keepers, posted on Facebook on the afternoon of the 6th, according to the filing.

Oath Keepers were just one group that attended the rally, with others including a variety of right-wing groups such as militia groups and neo-Nazi parties, as well as adherents to the QAnon conspiracy theory, who deployed a variety of tactics to gain entry to the Capitol, including wrestling with US Capitol Police on the terrace outside and a “Ranger file” special forces building-penetration tactic.

The Oath Keepers group was founded in 2009 based on right-wing fears that recently elected US President Barack Obama would order police or military officials to commit unconstitutional acts on behalf of a “New World Order,” such as taking away Americans’ guns or stationing foreign troops on US soil. Since then, it has grown to a group of more than 30,000 members, according to the Southern Poverty Law Center, which lists the Oath Keepers as a “radical anti-government group.”

SPLC notes that in the days immediately prior to the November 2016 election that Trump won, the Oath Keepers organized an “Operation Sabot” to patrol on Election Day and “look for and document suspected criminal vote fraud or intimidation activities.” The name refers to a type of bullet casing.

At least nine other people on the Signal chat have also been charged by federal prosecutors, who are pursuing charges of a wider conspiracy to breach the Capitol. More than 300 people have been charged so far, including Trump himself, who was acquitted of accusations he instigated the riot by the Senate in a February trial.

Four rioters and one Capitol Police officer died during the attack. While Congress was temporarily dispersed after they breached the building, their efforts ultimately failed and they were evicted from the building, after which lawmakers reconvened and certified the election results. Biden was sworn in on January 20 under the watchful eye of tens of thousands of US soldiers, who occupied Washington, DC in the evening after the rioters were dispersed.