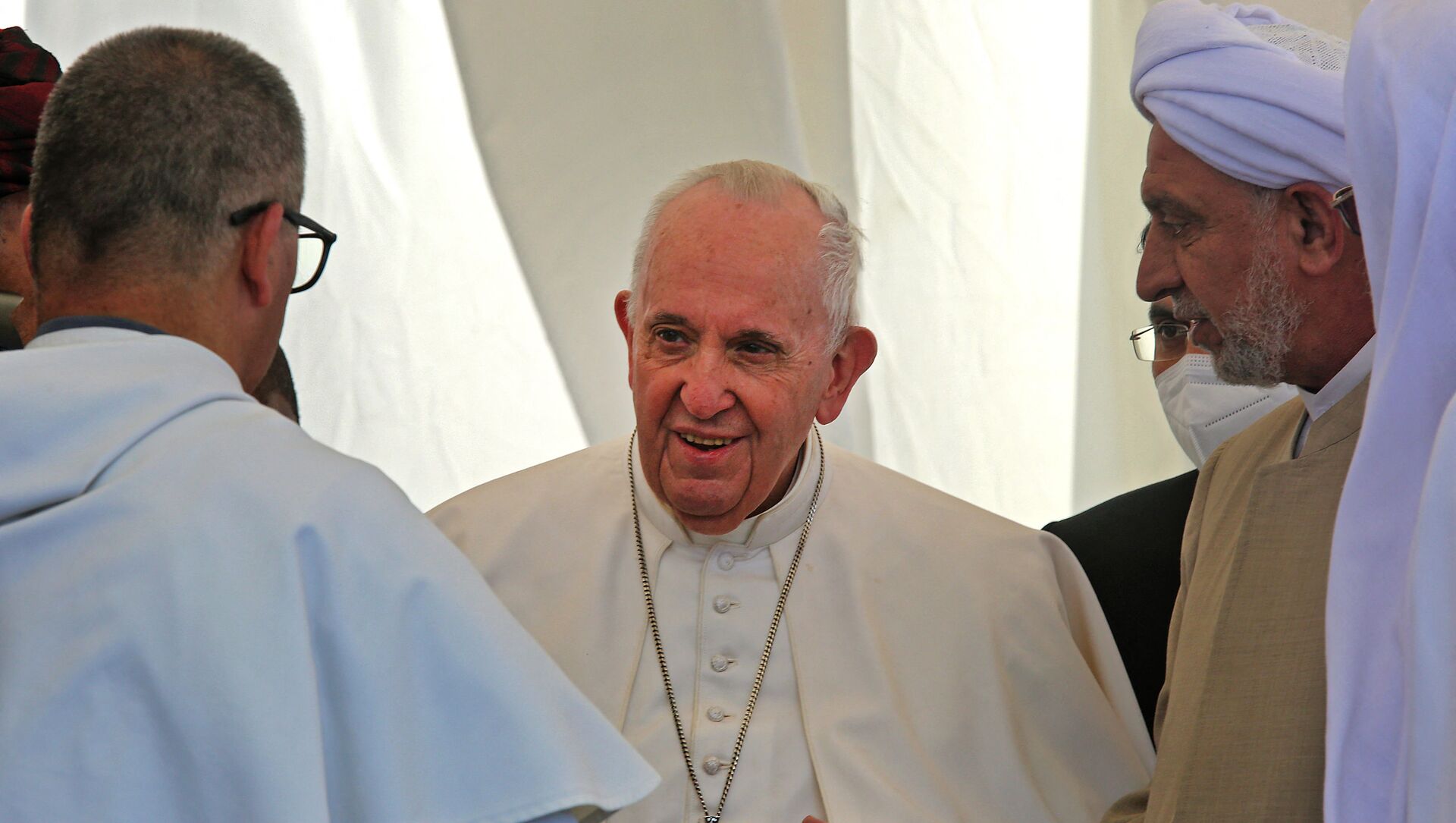 This week marked the first time that a head of the Roman Catholic Church has visited Iraq. In what Pope Francis described as “a duty to a land martyred for many years", the trip comes as the country suffers from ongoing violent clashes.

Pope Francis traversed through Najav on Saturday to visit Ur, the ancient birthplace of the Prophet Abraham - the common patriarch of three of the world's most major religions.

During his address at the historical event, the pontiff condemned violence in the name of God as “the greatest blasphemy”.

Francis sat alongside Muslim, Christian, and Yazidi leaders, shadowed by the archaeological dig of a 4,000-year-old city that makes up a pyramid-style Ziggurat, a housing complex, as well as temples and palaces.

“From this place, where faith was born, from the land of our father Abraham, let us affirm that God is merciful and that the greatest blasphemy is to profane his name by hating our brothers and sisters”, Francis said from the ancient site.

“Hostility, extremism and violence are not born of a religious heart: they are betrayals of religion", the pope proclaimed at Ur.

He stressed that "believers cannot be silent when terrorism abuses religion; indeed, we are called unambiguously to dispel all misunderstandings".

At Ur, Francis praised Muslims for supporting Christians in repairing their churches “when terrorism invaded the north of this beloved country”.

Rafah Husein Baher, a member of the Mandaean religious community, thanked the pope for making the trip amid the precarious situation in the country, including rising COVID-19 cases and rocket fire and suicide bomb attacks.

“Your visit means a triumph of virtue, it is a symbol of appreciation to Iraqis, Blessed is he who uproots fear from souls."

Francis later attended an evening service at Baghdad’s Chaldean Cathedral of Saint Joseph, where he paid tribute to “those of our brothers and sisters who here too have suffered prejudice and indignities, mistreatment and persecutions for the name of Jesus”.

Pope Francis at prayer service at Ur, the birthplace of Abraham, venerated by Jews, Christians and Muslims as the father of faith in the one God pic.twitter.com/hNQ0RcIXEW

​Abraham is considered to be the father of Christians, Muslims, and Jews. However, there was no Jewish representative present at the interfaith event in Ur.

A local Church official claimed that they reached out to Jewish Iraqis but they said the situation was “complicated” due to their having no community structure at this time.

In similar interfaith events in the past in largely Muslim countries, a senior foreign Jewish figure has taken part.

Earlier the same day, Francis met Grand Ayatollah Ali al-Sistani. The 90-year old is one of the most prominent figures in Shi’ite Islam, in both Iraq and elsewhere. The meeting sent a signal of cross-religious cooperation and was the first between a pope and such an important Shi’ite cleric.

Following the talk, Sistani urged the world's religious authorities to hold large powers accountable and for wisdom to prevail over war. He added that all Christians should live in peace like Iraqis.

“From this place, where faith was born, from the land of our father Abraham, let us affirm that God is merciful and that the greatest blasphemy is to profane his name by hating our brothers and sisters”

​Since the US-led invasion of Iraq in 2003, the country collapsed into years of conflict between religions and communal sects. After the elimination of Daesh in 2017, stability has somewhat recovered but the country remains subject to international disputes.

As relations between the US and Iran worsen, their rivalry has increasingly played out on Iraqi soil.