From PM Down Tories Reek of Hypocrisy and Double Standards 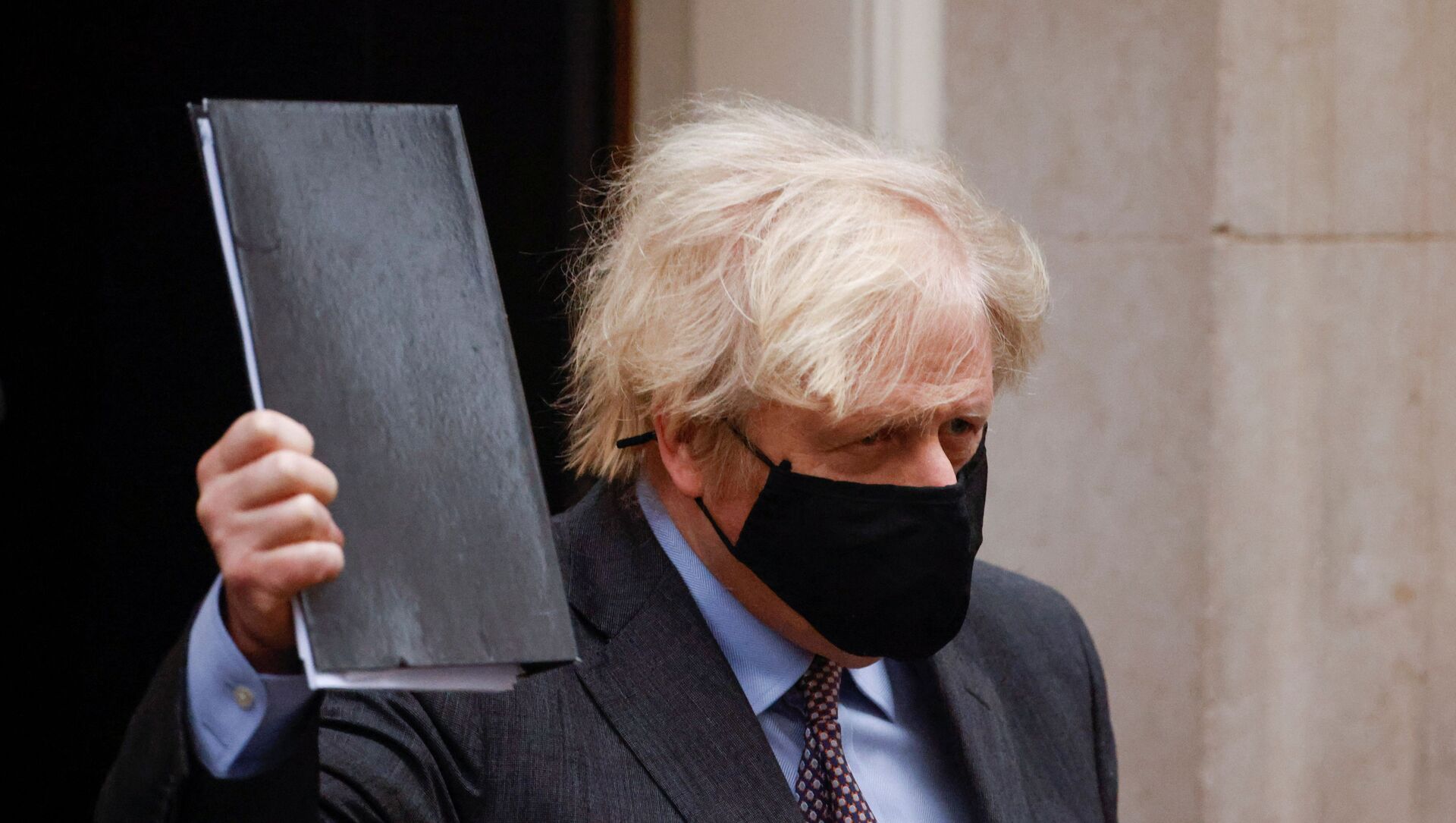 Tommy Sheridan
All materials
A High Court Judge has exposed Boris Johnson as a calculated liar who has misled the UK Parliament and all it’s citizens in order to cover up the extent of illegal awarding of PPE contracts to friends and Tory’s donors without justification or contract award notices.

The stench of the most rancid hypocrisy and double standards which pollutes the Tory party is foul and overpowering but yet again their hired poodles in the mainstream media fail miserably to hold them to account. Not a single mainstream media outlet has demanded Johnson’s resignation. What a woeful media we have.

Literally billions of pounds worth of contracts have been awarded to Tory mates and associates without proper notices, transparency or accountability and three days after his Health Minister was found guilty of illegal activity in relation to those awards, Boris Johnson deliberately misled Parliament to sustain the cover up, a fact which yesterday’s judgement reveals and the Good Law Project highlights:

“3 days after the High Court ruled Government had acted unlawfully by failing to publish Covid contracts, Boris Johnson stood up in the House of Commons and reassured MPs and the public that all Covid-related contracts were “on the record”. However, the final Order handed down by the Judge today shows that what the Prime Minister told the House was not true.

Remarkably, the Judge’s Order is based on Government’s own figures – so at the same time as Johnson was falsely reassuring MPs, Government lawyers were preparing a statement contradicting him – revealing 100 contracts and dozens of Contract Award Notices were missing from the public record”.

In the course of the Judicial Review against the government’s decisions to award billions of pounds worth of contracts to companies which had shady histories and inappropriate capabilities but plenty of Tory party connections, the shocking extent of criminality emerged. The Johnson Government submitted four inaccurate witness statements to the court regarding the number of contracts and Contract Award Notices which had been submitted out with the legal limit of 30 days. On the day of the hearing in court they said they had published 28% of the required Contract Award Notices within the legally required timeframe. Friday’s judgment records that was untrue and only 3% of Contract Award Notices were issued legally.

Let that sink in for a moment. A High Court written judgement has exposed the fact that 97% of government awarded PPE contracts involving billions of pounds were awarded illegally and the Prime Minister of the UK lied about it to Parliament.

Where Are the Resignation Calls From Scottish Tories in Relation to Hancock?

Matt Hancock the Health Minister was found guilty of illegal activity by the High Court two weeks ago and refused to resign or even apologise when asked but there was no concerted media campaign to take him down and hold him to account for activities a High Court of law declared illegal.

Contrast and compare that response with the shameless Tory party in Scotland who demanded the resignation of Scotland’s First Minister only days ago prior to her even addressing a Parliament Committee of enquiry about possible breaches of the Ministerial Code and before a separate investigation into whether she breached the code has even been published. The Tory UK Health Minister has been found guilty of acting illegally in relation to awarding Covid19 contracts and that is a flagrant breach of the Ministerial Code but not a chirp from the Scottish Tories demanding an apology let alone a resignation. Their fetid hypocrisy makes me want to vomit.

Why Isn’t Patel Being Called on to Resign by Scottish Tories?

The Tory Home Secretary Priti Patel was found guilty of breaching the Ministerial Code by being a bully and shouting and swearing at civil servant employees in the Home Office last year but not a single Scottish Tory called for her to be sacked and there was no media campaign to hold her to account for her actions. The Tory government has now reached a six-figure settlement with another civil servant, a senior one, after further allegations against Patel which involved claims that he was forced out of his job for intervening in her alleged bullying of fellow staff. A potentially embarrassing Employment Tribunal which would have compelled her to give evidence was on the horizon in September. Sir Philip Rutnam, a former permanent secretary in the Home Office, received a £340,000 settlement with a further £30,000 in costs. When the government’s own legal costs are added the bill the taxpayer will pick up will exceed £500,000. Where are the calls from Scottish Tories for Patel the bully to resign for breaching the Ministerial code?

Johnson Flagrantly Lied to Parliament – Where is Resignation Call?

Their own leader has been exposed by the written High Court judgement, and final Court Order published last Friday,  as a brazen liar to Parliament and the whole of the UK. That is a breach of the Ministerial Code. Where are the calls from Scottish Tories on Boris Johnson to resign? Read what a High Court has concluded about this Tory government’s actions:

“The Defendant has published 608 out of 708 relevant contracts for supplies and services relating to COVID-19 awarded on or before 7 October 2020. In some or all of these cases, the Defendant acted unlawfully by failing to publish the contracts within the period set out in the Crown Commercial Service’s Publication of Central Government Tenders and Contracts: Central Government Transparency Guidance Note (November 2017).”

No ifs, buts or maybes - the Tory government (the Defendant) acted unlawfully.

These are the morally bereft reprobates who stood applauding nurses last year for their incredible dedication and effort in the frontline against Covid19 who now recommend a miserly and insulting 1% wage rise amounting to no more than £3.50 a week, a recommendation that Junior Health Minister and Nadine Dorries described as a “pleasant surprise” as it was more than she expected because she thought the public sector wage freeze was still in place.

Nurses and other health and care workers deserve at least 15% wage rises to take their pay up to near where it should be if it had not been subjected to over ten years of brutal Tory austerity. The Tory shysters in charge over the last decade have managed to finance tax cuts and breaks for the millionaires and billionaires but say now they can only afford £3.50 a week for nurses who have given their all over the last twelve months. No wonder unions normally adverse to industrial action are now considering striking. I will certainly support the Royal College of Nursing and all other health unions in their demands for decent pay increases even if it involves industrial action.

Scotland Demands Freedom from the Lawbreakers, Liars and Bullies

Hancock the Health Minister is a flagrant lawbreaker. Patel the Home Secretary is a serial bully. Johnson the Prime Minister is a proven liar. They are all guilty of breaching the Ministerial Code that demands conduct above reproach and always within the law. Yet despite the clear and obvious breaches of the Ministerial Code not a Scottish Tory can be found demanding any resignations. They epitomise hypocrisy and double standards and they are why Scotland consistently now supports independence.

We may have our share of problems to confront but no independent Scottish government will be as bad as the Westminster Tories. No wonder 71% of Scots said their country would fare better as an independent nation in the ITV Tonight poll the other day. The one certainty in an independent Scotland is no Tory government will ever be elected. Scotland is an anti-Tory nation where the words of the late author and wise social commentator Iain Banks reflect majority opinion:

‘I’m not arguing there are no decent people in the Tory party, But they’re like bits of sweetcorn in a turd; technically they’ve kept their integrity, but they’re still embedded in s**t’.

000000
Popular comments
‘I’m not arguing there are no decent people in the Tory party, But they’re like bits of sweetcorn in a turd; technically they’ve kept their integrity, but they’re still embedded in s**t’. Raise the bar a little Tommy, there's no point having a comments section.
Terry Brown
6 March, 15:56 GMT1
000000
America has reeked of hypocrisy and double standards for years. Washington just tells everybody it's an expensive perfume and the people learned to love it
frank false flag
6 March, 23:35 GMT1
000000
Newsfeed
0
New firstOld first
loader
LIVE
Заголовок открываемого материала
Access to the chat has been blocked for violating the rules . You will be able to participate again through:∞. If you do not agree with the blocking, please use the feedback form
The discussion is closed. You can participate in the discussion within 24 hours after the publication of the article.
To participate in the discussion
log in or register
loader
Chats
Заголовок открываемого материала
Worldwide
InternationalEnglishEnglishMundoEspañolSpanish
Europe
DeutschlandDeutschGermanFranceFrançaisFrenchΕλλάδαΕλληνικάGreekItaliaItalianoItalianČeská republikaČeštinaCzechPolskaPolskiPolishСрбиjаСрпскиSerbianLatvijaLatviešuLatvianLietuvaLietuviųLithuanianMoldovaMoldoveneascăMoldavianБеларусьБеларускiBelarusian
Transcaucasia
ԱրմենիաՀայերենArmenianАҧсныАҧсышәалаAbkhazХуссар ИрыстонИронауОssetianსაქართველოქართულიGeorgianAzərbaycanАzərbaycancaAzerbaijani
Middle East
Sputnik عربيArabicArabicTürkiyeTürkçeTurkishSputnik ایرانPersianPersianSputnik افغانستانDariDari
Central Asia
ҚазақстанҚазақ тіліKazakhКыргызстанКыргызчаKyrgyzOʻzbekistonЎзбекчаUzbekТоҷикистонТоҷикӣTajik
East & Southeast Asia
Việt NamTiếng ViệtVietnamese日本日本語Japanese中国中文Chinese
South America
BrasilPortuguêsPortuguese
NewsfeedBreaking
17:38 GMTPoll: Kamala Harris & Michelle Obama Dems' Top Choices for 2024 Race If Joe Biden Decides Not to Run
17:27 GMTHunter Biden Received 3-Carat Diamond on Top of $10M a Year Deal With Chinese Businessman, Book Says
17:17 GMTWill the Maxwell Trial Expose Epstein's Rich & Powerful Friends or Turn Into Another Cover-Up?
17:12 GMTSouth Africa's Health Minister Unhappy With International Reaction to Omicron Strain
16:32 GMTKremlin: Anti-Russian Campaign Could Be Used to Distract From Kiev’s Planned Military Op in Donbass
16:11 GMTGermany Warns US Congress Nord Stream 2 Sanctions Will 'Damage Transatlantic Unity', Docs Show
15:54 GMTPrince Harry Lashed Out at Prince William Who Asked Him Not to Rush Things With Meghan, Book Claims
15:45 GMTPoland Ready to Help Finance Return of Migrants Stuck at Border With Belarus to Home Countries
15:05 GMTTwo Iranian Seamen 'in Good Health' After Being Rescued by US Navy Ship in Gulf
14:51 GMTThe Omicron Strain: What is Known About New COVID-19 'Variant of Concern'
14:47 GMTAustrian Chancellor Speaks for Proceeding With Nord Stream 2 Pipeline Project
14:43 GMTKyrgyz Lawmaker Detained on Suspicion of Plotting a Coup - Source
14:19 GMTBiden's Attempt at Sending Message of Return to Normalcy Thwarted by New COVID Variant
14:00 GMTMacron Bashed for 'Throwing Toys Out of Pram' as Patel Uninvited to EU Talks on Channel Crossings
13:47 GMT'Leaked' Ballon d'Or Result Confirms Lionel Messi as Winner, But Dutch Pundit Blasts PSG Forward
13:40 GMTUK Royal Air Force Accused of 'Woke B***hery' After It Ditches Airwomen and Airmen for Aviators
12:57 GMTOpposition Slams Indian PM as Modi Skips All-Party Meeting a Day Before Winter Session of Parliament
12:45 GMTIranian Nuclear Chief: Israel Should Check Its Capabilities Before Threatening to Attack Tehran
12:13 GMTStorm Arwen: Third Person Dies in UK, 240,000 Residents Left With No Power in England
11:19 GMT'Asleep at the Wheel': UK Bashed as China Has Pumped $900 Bln Into Commonwealth Nations Since 2005