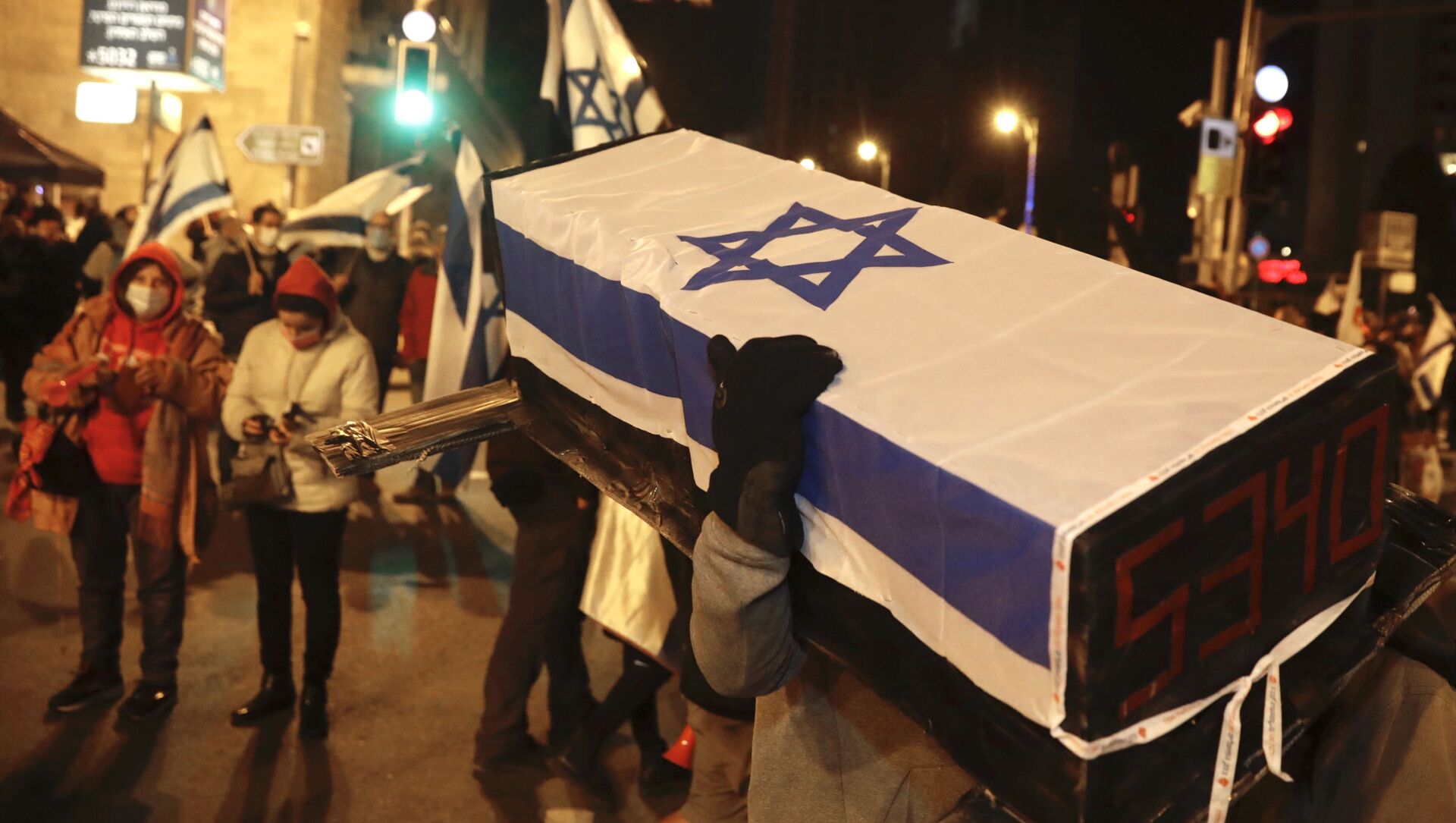 Kirill Kurevlev
Correspondent
All materialsWrite to the author
Demonstrations demanding the resignation of Prime Minister Benjamin Netanyahu have been ongoing since July last year, as he faces allegations of fraud, bribery, and breach of trust in two criminal cases. Netanyahu denies wrongdoing and says the indictments are part of a campaign to oust him from power.

According to the report, as usual, protests were set outside the Prime Minister's Residence in Jerusalem and Netanyahu's private residence in Caesarea on the Mediterranean coast. A rally was also planned in Hadera, near the location of Netanyahu's campaign gathering.

The protesters reportedly shouted "Come on Bibi get out of here" during a rally near PM's house in Caesaria. The report states that some famous Israeli artists have attended several rallies in a bid of showing their support.

The protesters also were singing songs with lyrics addressed to Netanyahu.

The report cited a statement put out by the Black Flags Movement, one of several organizations heading the regular protests, violence was again targeted at the demonstrators, which has been described as a "routine" occurrence during the protests.

"The defendant [Netanyahu] and his supporters are doing everything in their power to hurt the protest movement. Cyberwarfare, physical assaults and incitement coming from the Likud elections campaign have become normal," the statement is quoted as saying.

​Meanwhile, hundreds of environmental activists reportedly held protests in Tel Aviv, near the anti-Netanyahu demonstration at Habima Square, against the government's recent failures in coping with environmental disasters. Protesters were holding placards that read "Stop the anarchy! Prevent the next oil spill."

Snap elections for the 24th Knesset are set for March 23 after the government coalition led by Netanyahu failed to pass the 2020 budget in parliament on time. This will be the fourth early elections in less than two years.

The main coalition partner in the current government of Netanyahu's Likud party was the Kahol-Lavan bloc led by former Israeli Chief of General Staff of the Israel Defense Forces Beni Gantz, who, according to the terms of the coalition agreement, was supposed to become the prime minister in rotation.

Netanyahu has been the subject of multiple corruption investigations, including over claims he received expensive gifts from various businessmen, advanced a law that would benefit one of Israel's major newspapers and supported looser regulation of telecommunications company Bezeq in return for positive coverage.