75 Years Since Churchill's 'Iron Curtain' Speech: How Britain and the US Split the World in Two 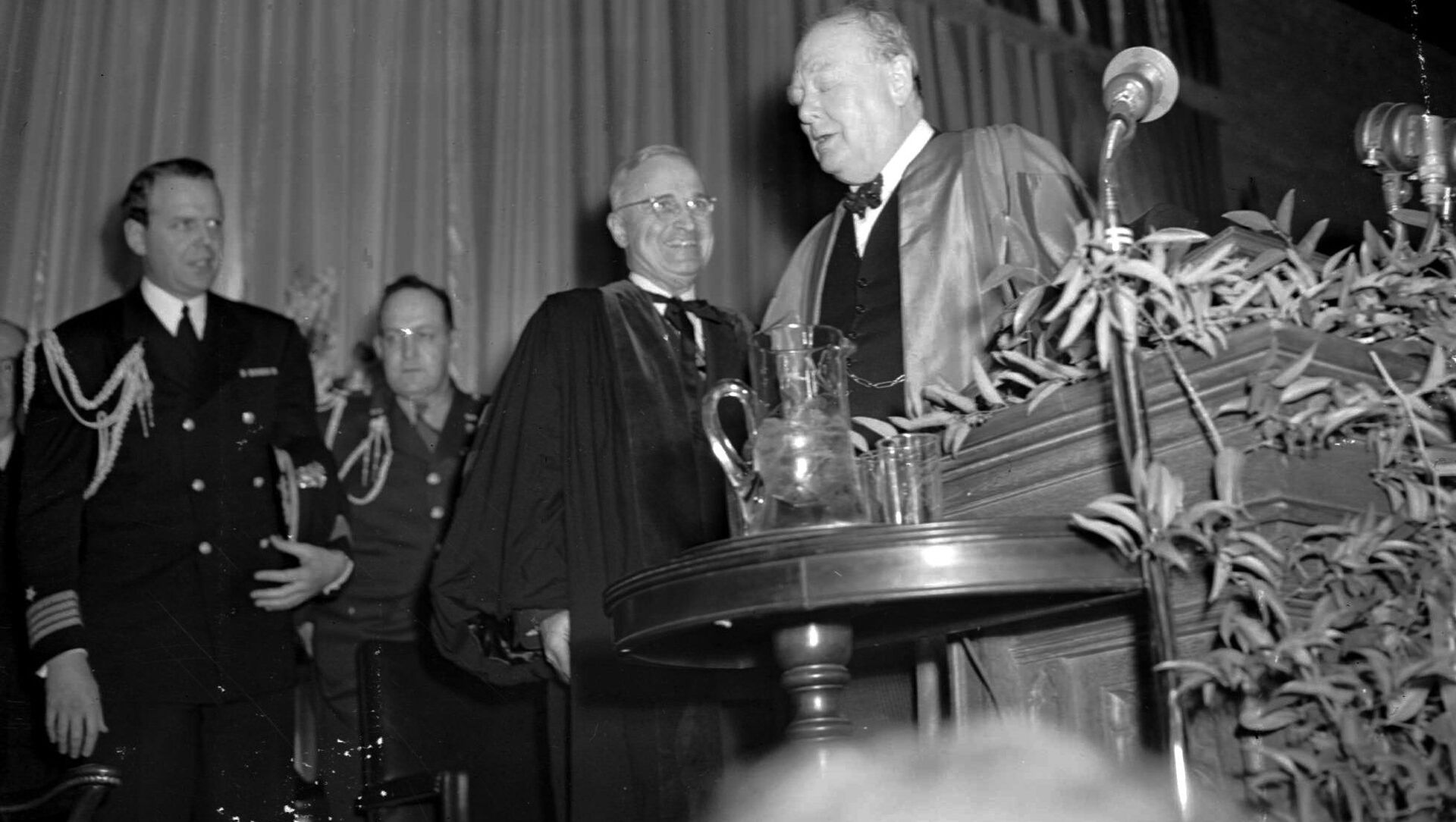 Jason Dunn
All materialsWrite to the author
Exactly three quarters of a century ago to the day, wartime leader and national British hero Winston Churchill issued his cautionary proclamation of what he believed to be the Soviet encroachment and domination of Eastern Europe.

On 5 March 1946, recently ousted British Prime Minister Winston Churchill’s made a speech that would echo in eternity. Speaking at Westminster College, Fulton, Missouri, he read what he entitled the "Sinews of Peace," or as it has become known more commonly – the "Iron Curtain Speech."

With US President Harry S Truman behind him, Churchill issued a stern warning about the Soviet Union’s occupation of the formerly Nazi-held territory in Eastern Europe "from Stettin in the Baltic to Trieste in the Adriatic," he told the American audience.

"An iron curtain has descended across the Continent. Behind that line lie all the capitals of the ancient states of Central and Eastern Europe. Warsaw, Berlin, Prague, Vienna, Budapest, Belgrade, Bucharest, and Sofia, all these famous cities and the populations around them lie in what I must call the Soviet sphere."

75 years ago, Winston Churchill gave one of his most famous speeches in Missouri about how the USA and the UK needed to work together to build institutions and defend democracies. 75 years on, the deep partnership that Churchill spoke of, is stronger than ever. pic.twitter.com/UxxEUDfRBy

​Despite losing to Clement Attlee's Labour Party in 1945, the Tory opposition leader had retained a large global voice due to his national wartime prestige. This single address would see the coining of a number of phrases that have become staples of global politics today.

Churchill pushed for the continued strengthening of the "United Nations Organisation" – the successor to the failed League of Nations. For the first time ever, a British politician would call for "a special relationship" to be formed between Britain and the United States.

His proposed Anglo-American alliance was explicitly intended to counter the Soviet Union, which had fought alongside the other allied powers and "tore the guts" out of the German war machine just a year earlier.

The "Iron Curtain" as a description of the Soviet Union and the communist world was not his original creation, however. On 25 February 1945, Nazi Propaganda Minister Joseph Goebbels wrote that an "agreement between Roosevelt, Churchill, and Stalin" would see the occupation of all of East and Southeast Europe along with the greater part of the Reich."

"An iron curtain would fall over this enormous territory controlled by the Soviet Union, behind which nations would be slaughtered," Goebbels wrote.

The prediction came during the final days of the Third Reich, a last desperate attempt to play to the Western fear of a future Soviet-dominated Europe.

Churchill's use of the term would ultimately prove more successful in garnering the attention of the American population. Just as former Wehrmacht generals and Nazi officials would be used to establish the Federal Republic of Germany (West Germany), the Iron Curtain would become just another weapon in the Axis Powers' arsenal absorbed by the Western allies in their renewed campaign against world communism.

The speech is considered to have marked the beginning of the Cold War – an ideological tussle between the capitalist countries and the socialist bloc for global hegemony.

After the defeat of the Axis Powers in Europe, the continent was halved by occupation. Having pushed back Nazi Germany from the east and suffering war losses estimated to amount to around 26 million people, the Soviet Red Army removed the fascist puppet states and was now stationed across Eastern Europe.

After D-Day, the American and British-led Second Front likewise saw the liberation of Western Europe from Axis occupation. Allied troops met at, and divided Berlin into respective occupied zones. The future of Europe now lay with the Big Three – Britain, the United States, and the Soviet Union. 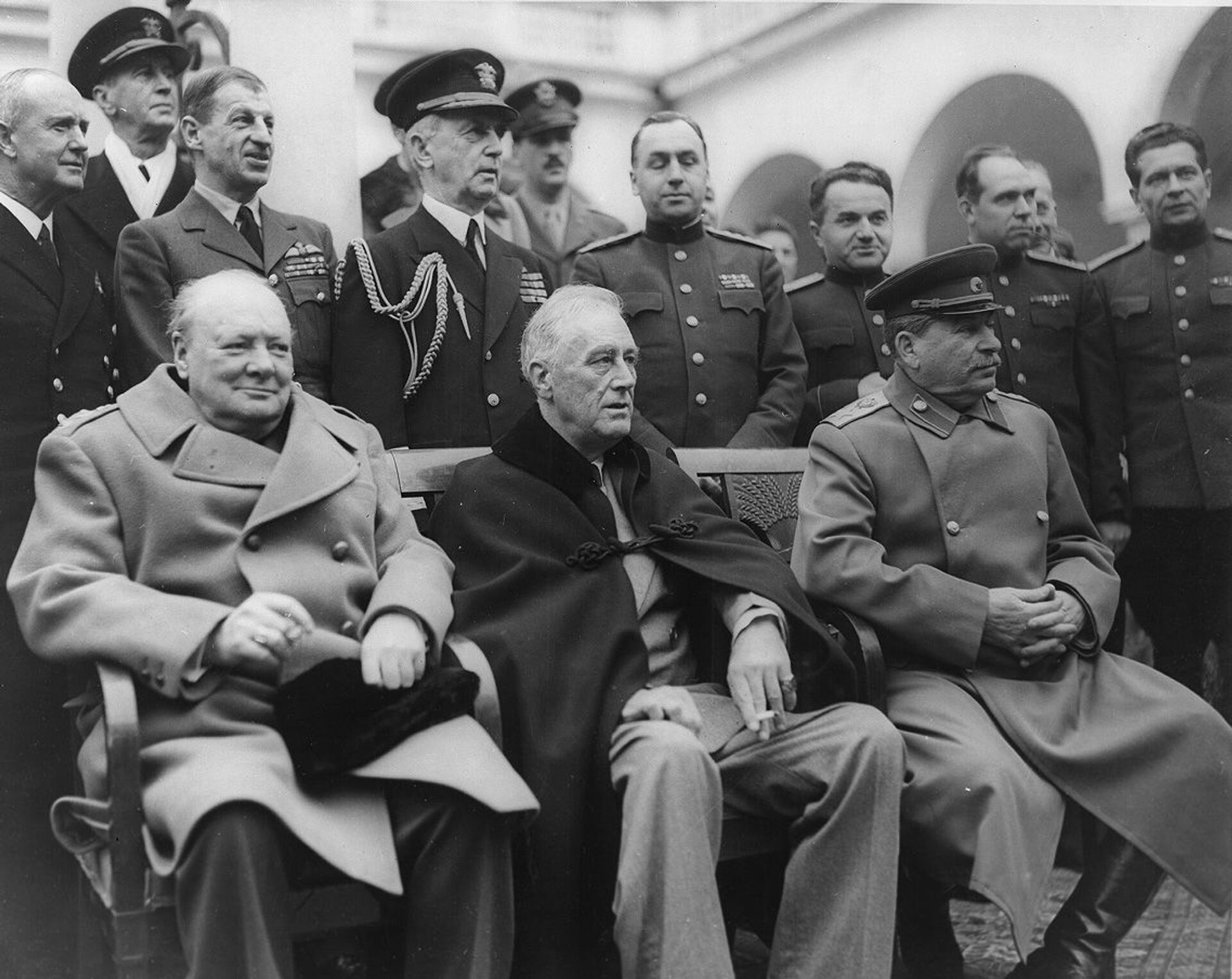 Here the Cold Warrior narrative begins. While Joseph Stalin at the time was considered a close wartime ally, the relationship is said to have fallen apart due to the Soviet leader's vision for Europe clashing with the democratic values of the West.

According to orthodoxy, Churchill and US President Roosevelt – later replaced by anti-communist hardliner Harry Truman – sought a democratic Europe, while Stalin was pre-occupied with communist expansion and installing puppet governments in the liberated territories.

Alongside US ambassador George F. Kennan's "Long Telegram" in 1946 – now regarded as misunderstood hyperbole – Churchill's speech helped shape this sentiment in Western countries towards the Soviet Union – seeing it no longer as part of an anti-fascist united front but as an expansionist power that had to be contained militarily and economically.

Churchill later wrote that events had "vindicated" his warnings, following the installation of Marxist-Leninist governments in the Soviet-occupied territories of Poland, Romania, Bulgaria, Hungary, Albania, East Germany, and Czechoslovakia.

Historian Andrew Roberts wrote in the Express on Friday that Churchill was "waking up the democratic West to a Cold War that Stalin had already launched."

"Churchill used the same extraordinary foresight as he had in his "wilderness years" in the 1930s, when he had sought to warn the world about the rise of Hitler," Roberts claims

This is how the story is told. Yet the actual behaviour of the two sides shows this picture to be misleading, if not the complete inverse of reality.

In February 1945, at the Yalta Conference Churchill and Roosevelt heard Stalin's demands that the Red Army-controlled territories of Eastern Europe serve as a buffer zone to prevent a future German invasion. Given Operation Barbarossa had seen the elimination of around 15 percent of the entire Soviet population, there was little opposition from the allied leadership.

Stalin would go on to "salami slice" – as the Hungarian Communist Mátyás Rákosi described it – non-compliant actors in the occupied territories until Eastern Europe was securely under the control of Moscow, or so the argument goes.

Just a year before his famous speech, Churchill wrote to new President Truman despondently warning of an "Iron Curtain drawn upon [the Soviets’] front," in reference to this alleged tightening of the Soviet grip. 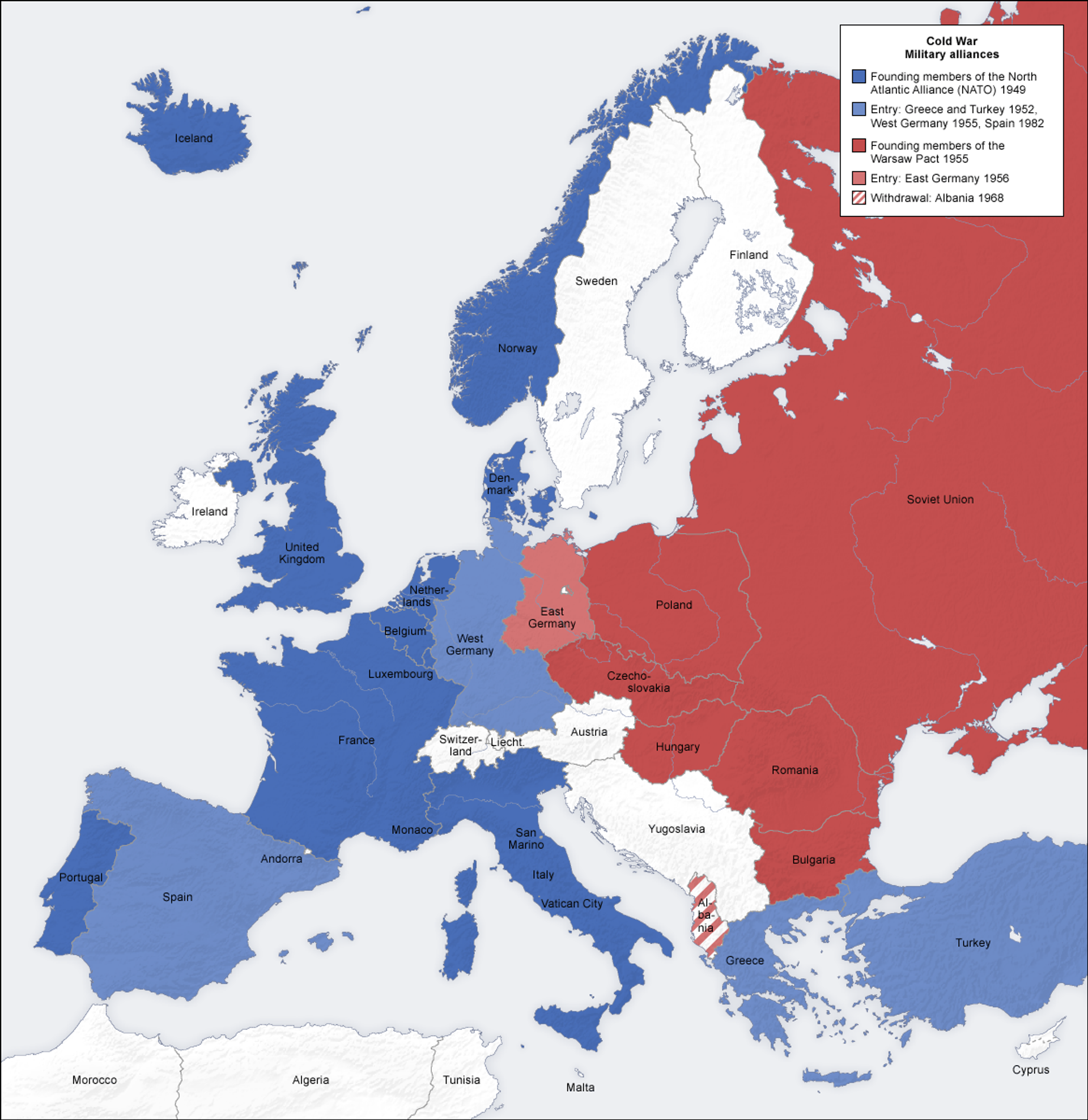 Map of Cold War military alliances in Europe. Since the Soviet collapse, NATO has swallowed up every country that was once part of the Warsaw Pact, and even began advancing into the former USSR itself.
CC BY 3.0 / San Jose / Cold War Europe military alliances map

With Churchill replaced by Attlee, and President Truman now in office after Roosevelt's death, fresh faces would attend the Potsdam Conference where Stalin re-affirmed the need for a Soviet protective sphere in Europe.

By 1950, the Soviet buffer zone had been achieved with the construction of Eastern Europe's people's democracies. Despite this outcome, events in the lead-up to this indicate events may not have gone entirely according to Stalin's plan.

In 1948, the US had begun to show that it too had a vision for Europe. The Marshall Plan, the oft-hailed supreme example of US soft-power by internationalist liberals, was itself driven by Washington's desire to reshape Europe in its image.

The Soviet leadership agreed to the general idea of financing the reconstruction of war-torn Europe, the stipulation that recipients of Marshall aid would have to meet American political criteria threatened the integrity of the neutral protective buffer zone guaranteed at Yalta.

Immediately following Soviet rejection of the Marshall Plan began what is considered to be one of the first major conflicts of the Cold War. The Berlin Blockade has similarly been skewed to present an unceasing Soviet attempt to starve Berliners into submission, while the heroic Western allies protected the civilian population of the occupied German capital.

​Historical records, however, reveal that it had been the intention of the US and Britain to turn their shared occupied territory into a West German state. This ran contrary to their promises at the wartime conferences to see the former seat of Nazism become a neutral unified country. When the Western powers imposed a separate currency in their zone, the Soviet's fear they were planning to establish a separate country proved entirely accurate.

In May 1949, at the Paris conference of Foreign Ministers, Stalin suggested the removal of occupation troops altogether. In response, the US and Britain proposed an Allied High Commission where decisions would be made based on a majority vote, thus depriving the Soviets of a veto.

American General Lucius D. Clay later admitted he was concerned that the Soviets might have accepted the original outline, and said that it would have “been the end of efforts to form a West German government”.

A year later saw the formation of the North Atlantic Treaty Organisation NATO. Just 3 years after Churchill's address at Fulton, Prime Minister Attlee would pledge the UK's signature to the military alliance against the Soviet Union. In response, Moscow would form the Warsaw Pact with the other newly-formed socialist bloc countries.

At every key instance that led to the collapse of the wartime alliance and the carving up of Europe, Moscow was reciprocating moves initially made by the Western powers.

Meanwhile, the Soviets were engaged in clawing for reparations from the countries that had previously been involved in the 1941 Nazi-led invasion, in order to fund their own post-war reconstruction. Establishing a Soviet-dominated camp paid for and secured by Moscow was a reactive move, and likely the one Stalin wanted least.

Russia's concern of Western invasion pre-dates World War 2. Near the end of the Great War in 1917, following the October Bolshevik Revolution, a coalition of imperial powers intervened in the Russian Civil War to destroy the fledgling socialist government and install the jerry-built White coalition. As war minister, Churchill was one of the most prominent architects of Britain's involvement in this campaign. 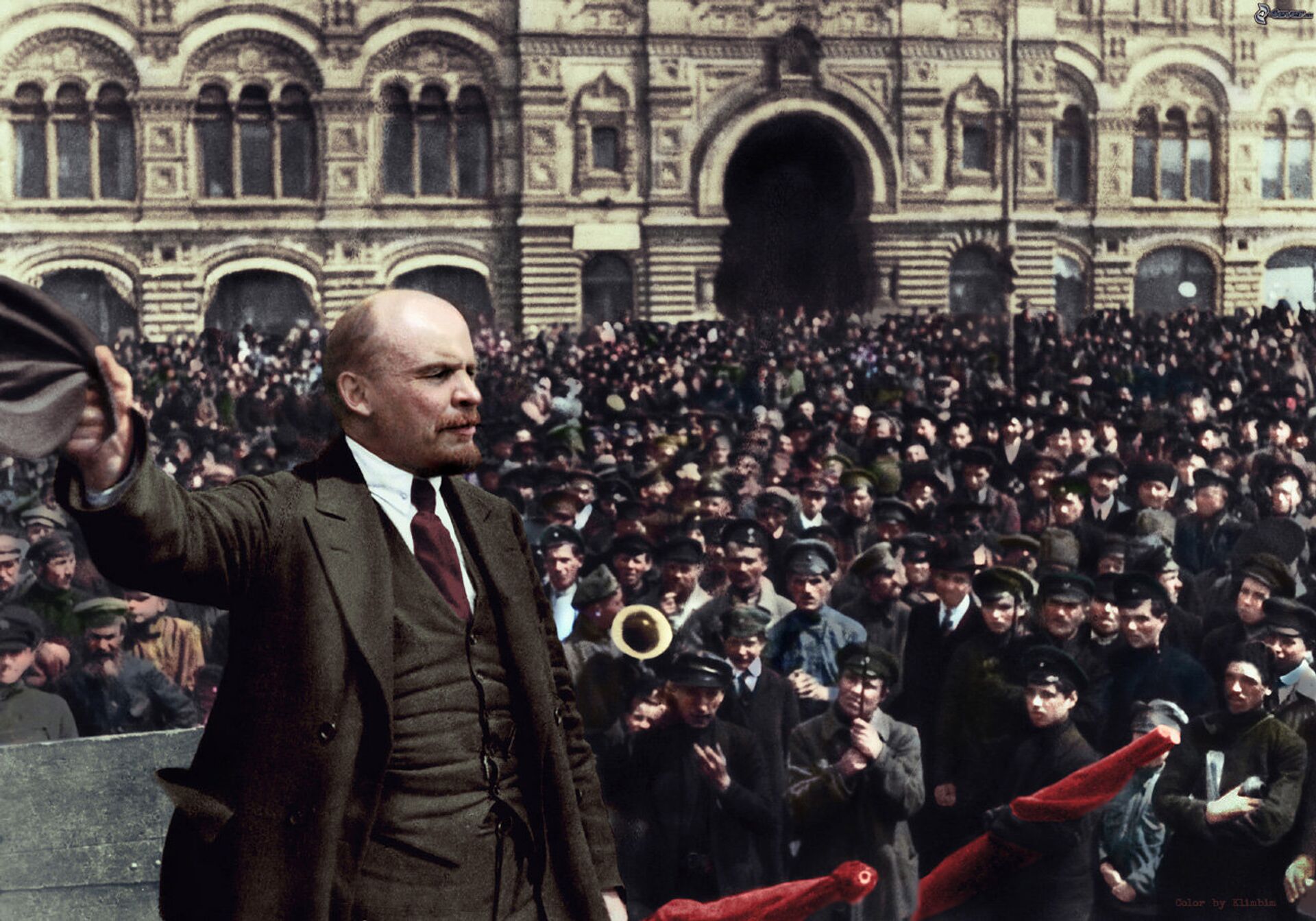 "The aid which we can give to those Russian armies which are now engaged in fighting against the foul baboonery of Bolshevism can be given by arms, munitions, equipment, and by the technical services. It is a malicious statement against the interests of the British Empire to suggest that it is necessary for us to prolong the action of the Military Service Act because of enterprises which we have on foot in Russia", Churchill said in his 1919 Mansion House speech.

Failing to destroy the Soviet government, the Western powers opted to contain the revolution by building a bulwark of anti-communist governments around Russia throughout the 1920s. In what French president Georges Clemenceau called a “cordon sanitaire,” this would be the first de-facto division between the communist and capitalist world.

The Soviet Union is 30-years dead. But the impact of the Iron Curtain speech has defined global politics in every decade since it was proclaimed to the Westminster audience.

Truman's policy of containment would later evolve into the Domino Theory, a strategic justification for the United States and Britain's laceration of millions of people in Korea, Vietnam, Cambodia, and Laos as part of the "free worlds" crusade to stop the perceived spread of communism.

More covert, but no-less bloody action would also be taken with the staging of CIA-backed coups in Chile, Guatemala, and across Latin America and Asia as a whole – leading to outright genocide in the case of Indonesia.

His predicted division of Europe and subsequently the world until the end of the Cold War in 1991, therefore, became a self-fulfilling prophecy. When Churchill warned of an Iron Curtain appearing across the continent he did so with the experience of someone who had helped erect it.