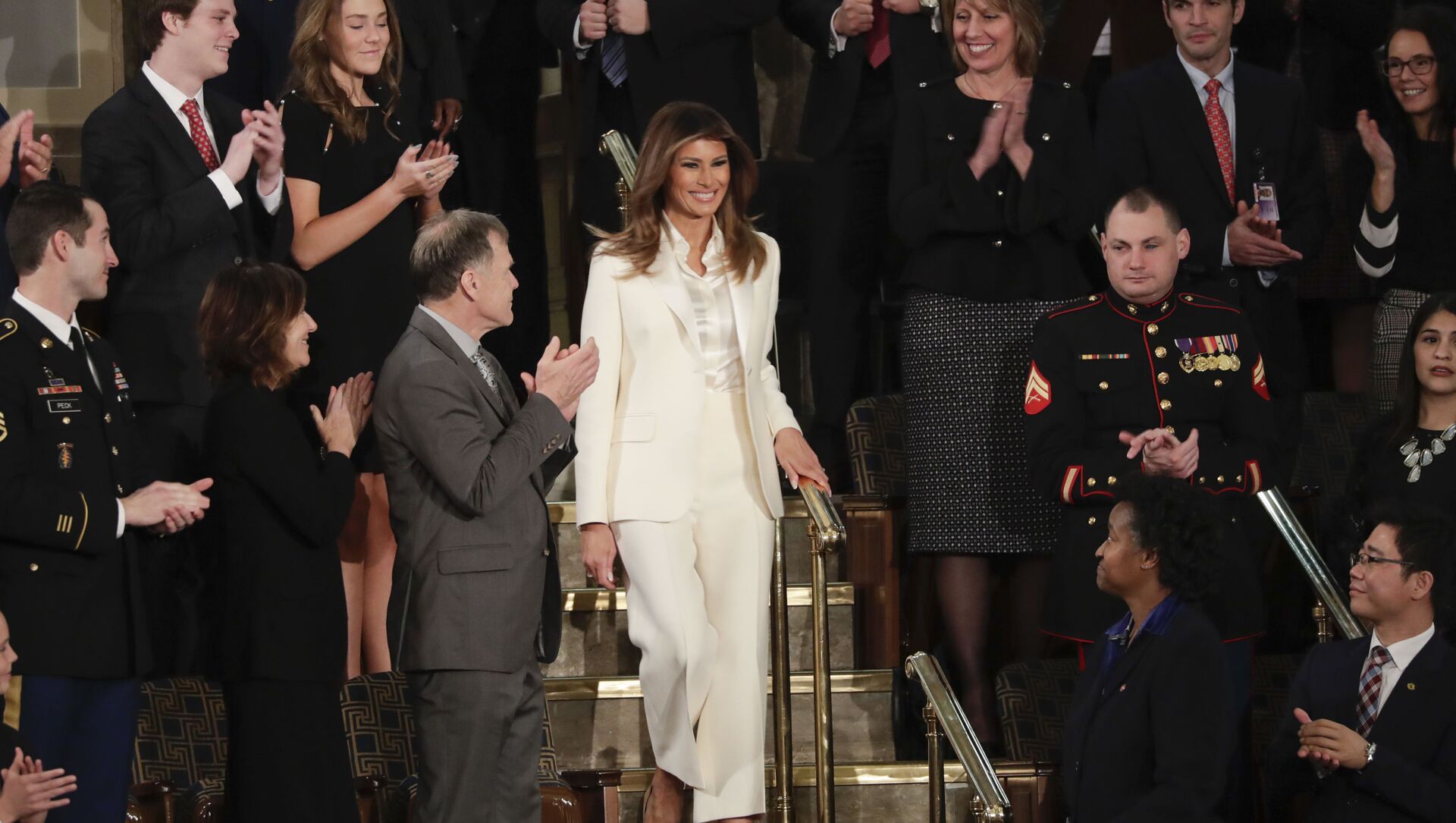 © AP Photo / J. Scott Applewhite
Subscribe
Lilia Dergacheva
All materialsWrite to the author
There finally seems to be a full stop to perpetual rumours about the couple's alienation from each other in the wake of the hard last few months of Donald Trump't term, mired by the Capitol siege and impeachment proceedings, which, however, ended in the Republican ex-president's acquittal.

Although Melania Trump could not be seen in attendance at the Conservative Political Action Conference (CPAC) in Orlando, Florida, when Donald Trump made a lengthy speech addressing fellow Republicans and supporters, he did refer to his wife as "the future first lady".

"Do you miss me yet?", Trump asked the roaring crowd as he took the stage at the Orlando gathering, just 200 miles from his and Melania's home Mar-a-Lago, where the former first lady is expected to be staying after they left Washington.

"Actually as you know, they just lost the White House, but it's one of those things. But who knows, who knows, I may even decide to beat them for a third time", Trump went on, thereby referencing his earlier claims about voter fraud and the "stolen" election.

According to TMZ, he finished his speech by saying, "With your help we will take back the House. We will win the Senate. And then a Republican president will make a triumphant return to the White House", followed by a tongue-in-cheek, "And I wonder who that will be?"

Trump's comments immediately set tongues wagging, not merely because the double-impeached president's political aspirations and future have of late provoked heated debates in the mass media and beyond. The comments from the Sunday gathering, where Trump made his first official speech since Joe Biden's inauguration, came amid large-scale rumours that the ex-power couple was weighing a divorce once they are out of Pennsylvania Avenue.

Trump refers to Melania as "Our great FUTURE first lady".

No one is more popular than him, Melania Trump might be our future First Lady! https://t.co/zcpUyxCaiV

"Trump just called Melania the Future First Lady. Who is she marrying next any guesses?", one netizen posted cheekily.

Heart emojis also made an appearance in Twitter threads:

What recently added fuel to gossip about the couple's "chemistry" was a book that came out in June, "The Art of Her Deal: The Untold Story of Melania Trump", which claimed that the former Slovenian model stayed at Trump Tower in New York for months after her husband's inauguration (under the pretext of taking care of their teenaged son Barron) as leverage to clinch a better agreement for herself.

Separately, Melania has been "bitter and chilly" toward her husband in the wake of the Capitol attack, which was broadly blamed on the ex-president, and subsequent impeachment trial that marked the end of his term, a CNN report has it.

Melania has so far been invisible since leaving the White House, although she is reportedly set to carry on working on her flagship social campaign "Be Best", aimed at halting online bullying.

She is in the midst of setting up an official office and has hired three former employees from her East Wing staff in the hopes of resurrecting her campaign, sources familiar with her plans shared with CNN.

Yet, for the time being she has reportedly set herself a goal of fully recuperating after the tumultuous past few years.

"She goes to the spa, has lunch, goes to the spa (again) and has dinner with Donald on the patio", one person familiar with Melania Trump's schedule at Mar-a-Lago, her home in Palm Beach told CNN. "Rinse and repeat. Every day", they added.

Another source, familiar with Trump's daily routines, noted there hasn't been much change in Mrs Trump's schedule.

"It's pretty much the same as it was before (she was first lady) or even when she would come down during vacations", said the source.