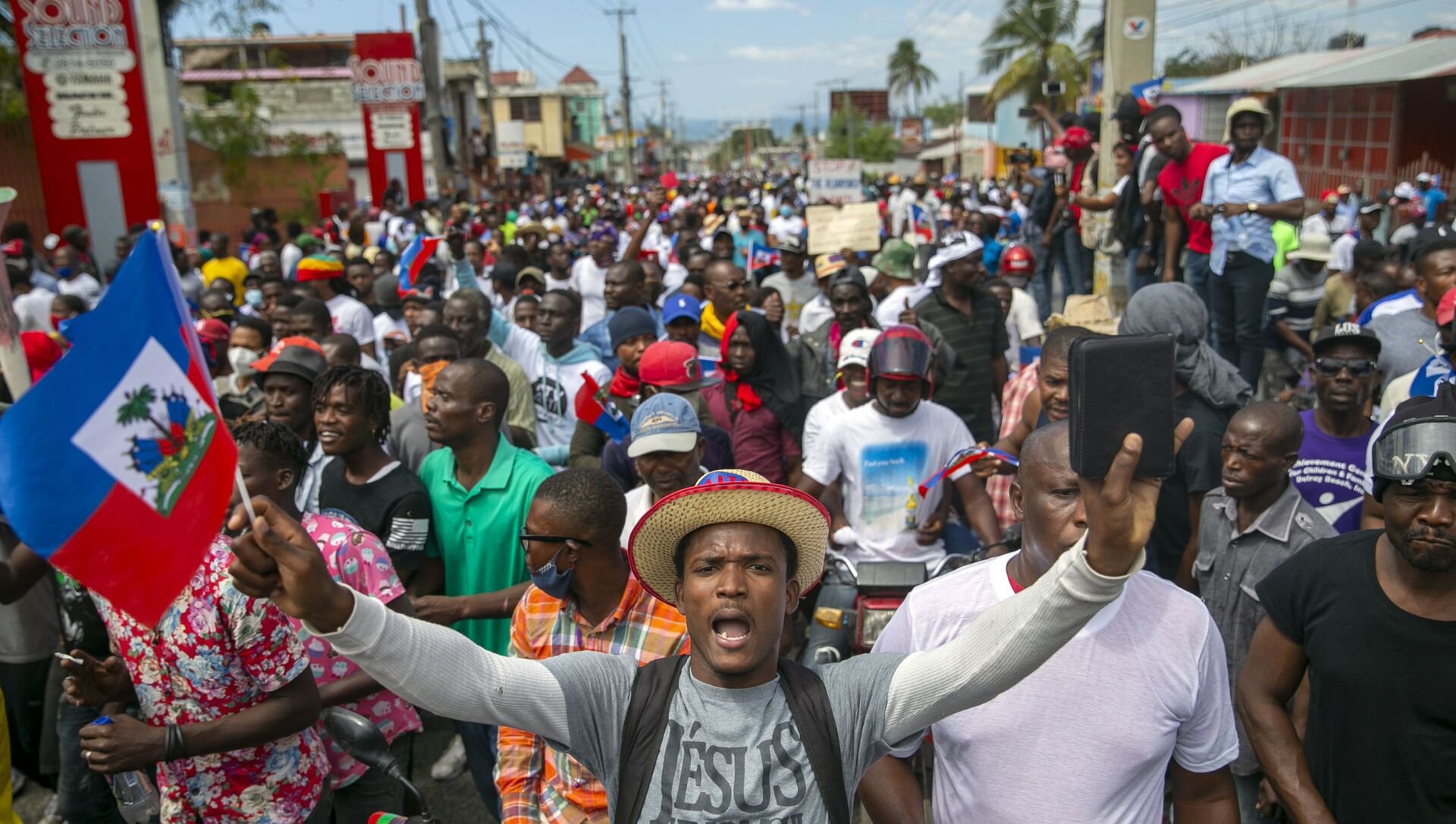 Morgan Artyukhina
All materialsWrite to the author
In the aftermath of Haiti’s catastrophic 2010 earthquake, the US helped the right-wing Tet Kale Party take and retain power, including backing the controversial delays in the 2015 election at the heart of the present crisis.

Huge protests swept across Haiti’s capital of Port-au-Prince over the weekend, as well as a number of other provincial towns, as Haitians took to the streets by the tens of thousands to demand President Jovenel Moïse step down.

They carried signs and sung songs and chants demanding an end to his power grab last month, as well as to the violence of gangs allied with his government, which have terrorized communities with kidnappings and killings.

I searched for news on the anti-imperialism and anti-dictatorship protests in #Haiti and found nothing. Haitian resistance has always been a threat to the imperialists, which is why they spend billions to contain/oppress the little nation that's only a third of an island. pic.twitter.com/6hU27omiXQ

The people of #Haiti say no to US-UN-OAS imposed neoliberal puppet dictatorship.

​The protesters hold that Moïse’s last day in office should have been February 7. However, he claims that a year’s delay in him taking office means he now gets an extra year as head of state. Those who oppose his claims have been subjected to increasing violence and repression.

People were particularly enraged by the killing of 63-year-old pediatrician Ernst Pady, who was shot by gangsters during an attempted abduction on Sunday morning.

"We have a president that we no longer recognise because his term is over,” protester Moise Gueslin told Agence France-Presse. “Look at how a doctor was killed: is it possible to live in a country like this?"

State/bourgeoisie/imperialist death squads murdered Dr. Ernst Pady - a beloved pediatric doctor and private school owner serving his community. They shot him dead because he resisted being kidnapped, and left with his wife. More violent tactics to keep #Haiti in submission. pic.twitter.com/IJVXtDso4K

​Meanwhile, others demanded an “economic revolution” undoing the carefully manicured dependency of Haiti on the United States, including one person who came astride a mule and dressed up as Jean-Jacques Dessalines, the former slave-turned-general who led the successful slave revolution in 1804 that ousted the French colonists and established Haiti as the first Black republic in the western hemisphere. Dessalines’ name has been constantly invoked amid the demonstrations against Moïse, who is seen as symbolizing the ostracism and victimization imposed on Haiti by colonial powers ever since its independence.

​By some estimates, 100,000 people marched in Port-au-Prince alone; at the huge rallies, they taunted Helen la Lime, the UN Special Representative in Haiti, a former US diplomat and figure they see as helping orchestrate the present crisis, for chronically underestimating the size of the anti-Moïse demonstrations in her reports.

US Diplomat Helen La Lime - Head colonizer of the UN neocolonial "Integrated Office" in #Haiti claimed only 3000 people protested on Feb 14, to justify support for her unconstitutional puppet.

Protesters in #Haiti accuse U.S. Diplomat Helen La Lime - head colonizer of the neocolonial UN "Integrated Office" in the country of stirring conflict, so they can take over. The people are many steps ahead of the UN humanitarian imperialists. Good job @IngRevolte. pic.twitter.com/nljtzAE5UR

​From 2004 until 2017, the UN maintained thousands of peacekeeping troops in the country, many of which were found complicit in everything from widespread sexual abuse of Haitian citizens to having caused the nation’s first Cholera outbreak.

On Monday, protesters in Washington, DC, demonstrated outside the Haitian Embassy in solidarity with the struggle in Haiti, and to demand the Biden administration end its support for Moïse.

“With the election of US president Joe Biden, folks believed this so-called ‘champion’ of fair elections and the rule of law - who had expressed a commitment that ‘Black Lives Matter’ - would rally to the side of Haitians and end US support for the dictatorship,” the Black Alliance for Peace, which called the protest, said in a statement. “But that did not happen.”

“It did not matter that Moïse ruled by decree, that he violated the rights of his people and that the majority of the people wanted him gone. What mattered to the Biden administration was the purpose Moïse served in US plans for the Caribbean and Latin American region,” they added. “The values that the United States and Western Europeans pretend to uphold - like democracy and human rights - are dead letters when it comes to the fundamental human rights of the peoples of the global South.”

​They also called attention to the wider struggle of Black people around the globe, calling for US Africa Command to leave the African continent as well as expressing solidarity with Black workers in Alabama who are presently engaged in a fierce struggle to become the first-ever unionized Amazon workers.

'Worse Than the Duvaliers'

As Sputnik reported at the time, the Haitian Superior Judiciary Council ruled Moïse’s term was over on February 7, his five-year term having expired. There having been no elections for a replacement head of state, the opposition presented Supreme Court judge Mecene Jean-Louis as the interim president until new presidential and parliamentary elections could be organized. In response, Moïse had Jean-Louis and nearly two dozen others arrested and claimed to have foiled a coup d’etat.

During the 2015 Haitian presidential elections, Tet Kale Party candidate Moïse handily won the first round, but after widespread voter fraud a runoff election was held after much delay, which Moïse also won; as a result, he took office on February 7, 2017, instead of February 7, 2016. According to Al Jazaeera, the Haitian constitution mandates a 5-year term for the president beginning on February 7, but also says that if the election is delayed, the president immediately takes office but his mandate is considered to have begun “on February 7 in the year of the election.”

Now, he has proposed changes to the 1987 Haitian Constitution, which dates to the re-establishment of democracy following the ouster of longtime dictator Jean-Claude “Baby Doc” Duvalier the year prior. The changes would further enhance the power of the presidency, including by removing the office of the prime minister, a figure who at present can only be dismissed by the National Assembly.

Pierre Esperance, coordinator of the Haitian human-rights group National Network in Defence of Human Rights (RNDDH), told Al Jazeera that Moïse’s government “ is worse than those of the Duvaliers,” who ruled with an iron first from 1957 to 1986. “The United States, Canada, the UN and the European Union are endorsing the excesses of power. The people have the last word to thwart this dictatorship.”