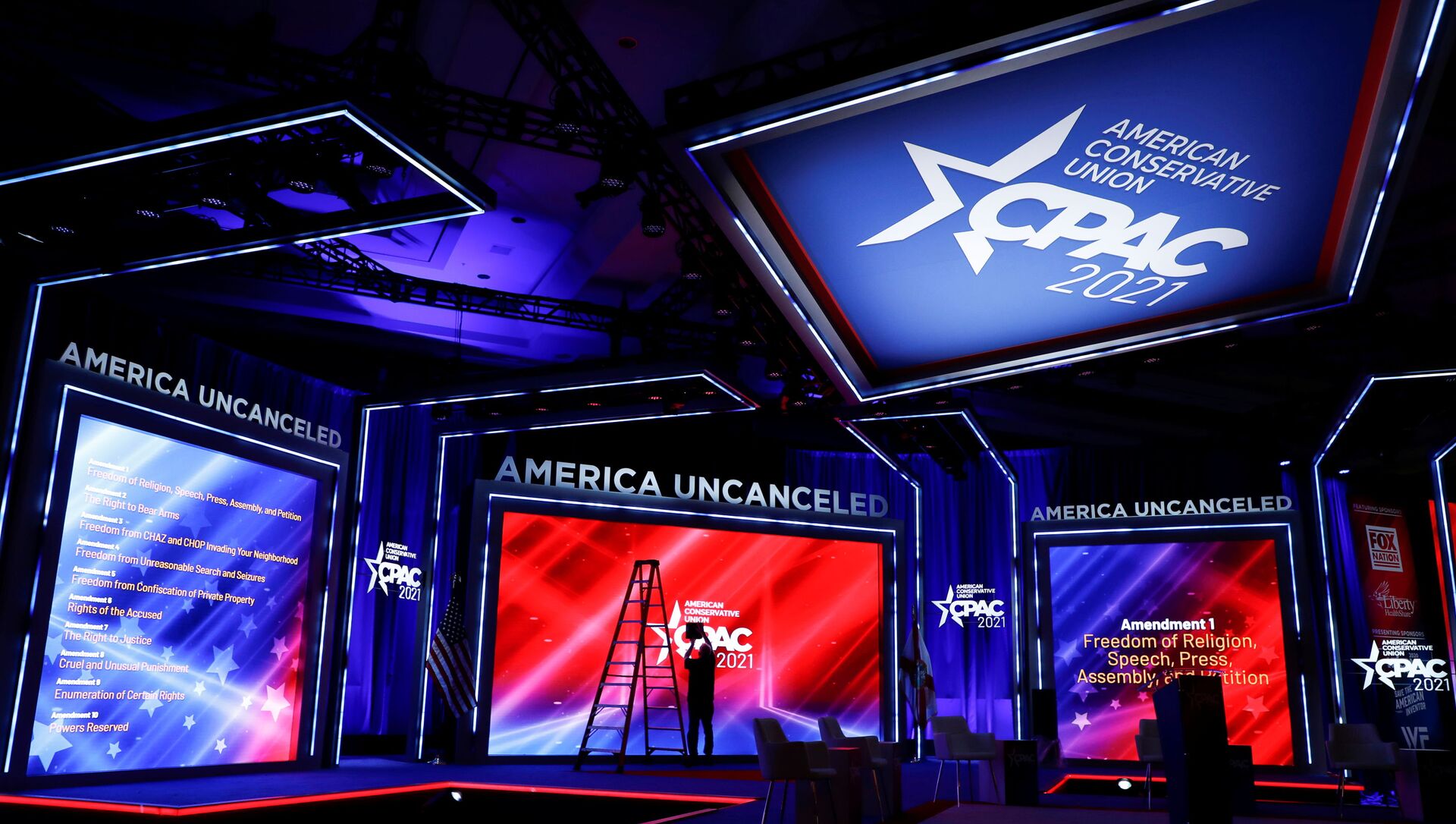 Daria Bedenko
All materialsWrite to the author
The Conservative Political Action Conference (CPAC) is an annual political conference for conservative figures from the United States, held this year in Orlando, Florida, from 25 February to 28 February.

On Saturday, after spotting similarities in the design and branding of the CPAC stage and the use and looks of the Odal rune, netizens lashed out on the Hyatt Hotels hospitality company for hosting the conference with a "Nazi-inspired" stage design and also for failing to "do something" about it.

The outrage sparked after some netizens suggested that the CPAC stage in The Hyatt Regency Orlando resembles the Odal rune - a symbol used by Nazis - suggesting that the design is intentional. The Hyatt was bombarded by critical inquiries and demands for explanations, prompting the company to respond.

"Hyatt's most fundamental responsibility is to provide a safe and inclusive environment for all of our colleagues, guests and customers", the hotel chain stated. "We believe in the right of individuals and organizations to peacefully express their views, independent of the degree to which the perspectives of those hosting meetings and events at our hotels align with ours."

The statement did not appear to satisfy the critics - on the contrary, the anger only intensified, and calls for a Hyatt boycott followed.

Official @Hyatt statement saying they are just fine with Nazis displaying nazi symbols in their property.

I will never again stay at a @Hyatt property. Will you?#HeilHyatt https://t.co/5c4Ba5qCkh

Hyatt and Nazi are trending at the same time because they are hosting a group of White Supremacists whose stage is an actual Nazi logo.

Guess you did Nazi that coming, did you @Hyatt? pic.twitter.com/9TPkc94F9K

Are you okay with Nazi symbols being used on your properties?

Because if you fail to speak out & do something about this immediately, I’ll be sure to no longer patronize any of your properties ever again. #CPAC2021 #CPACstage #CPACNazi pic.twitter.com/beFauYAMwO

​The rage continued spread over threads, with both "Hyatt" and "Nazi" skyrocketing to Twitter trends.

The GOP might as well just rebrand themselves as the Nazi Party. It's not like they're trying to hide it anymore.

This week, Senator Ted Cruz screamed "freedom" on a stage literally shaped like a Nazi symbol at a conference where attendees are worshipping a giant golden statue of Trump, and this is all just pretty normal now. Still trying to wrap my head around it, I guess.

I'm sure it's just a coincidence that cpac shaped their stage like a nazi rune.

#CPAC: Mike Pompeo is talking about all the horrible things he's been called by the media and Democrats...

You're standing on a Nazi symbol, Mike. pic.twitter.com/GmILRWfxfH

​One prominent CPAC figure,  Matt Schlapp, the head of the American Conservative Union, reacted to the passions boiling on Twitter by slamming the stage design allegations as "outrageous and slanderous", reaffirming "a long standing commitment to the Jewish community."

Stage design conspiracies are outrageous and slanderous. We have a long standing commitment to the Jewish community. Cancel culture extremists must address antisemitism within their own ranks. CPAC proudly stands with our Jewish allies, including those speaking from this stage.

​While many called to punish Hyatt companies amid allegations of "hosting Nazis", others, particularly a former governor of Arkansas, Mike Huckabee, weighed in to defend the corporation.

"I shall be giving Hyatt more of my business! No corp should be punished for selling their core product-refreshing to see them stand their ground", Huckabee tweeted.

The 2021 CPAC conference takes place 25 to 28 February in Orlando, Florida.