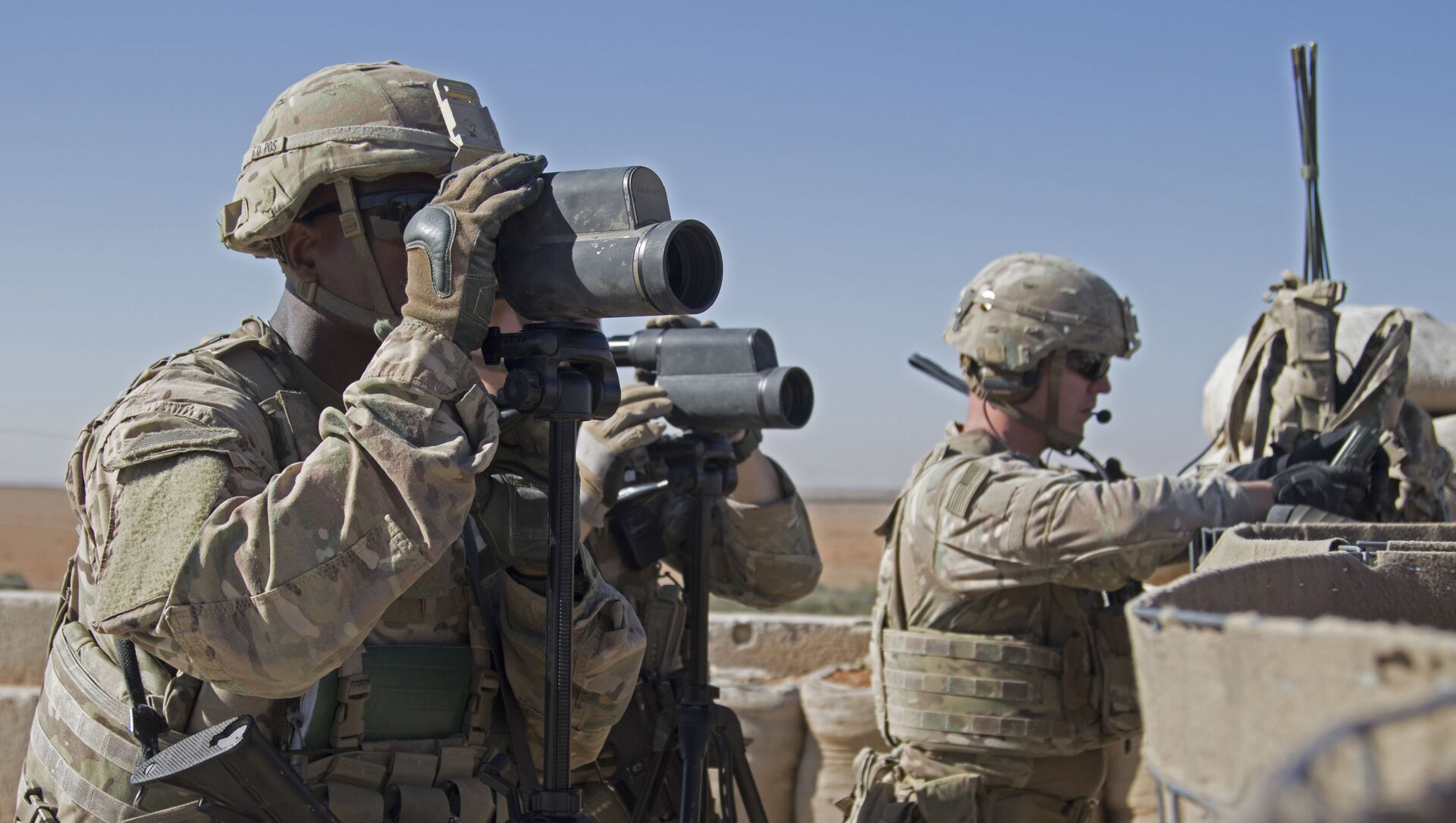 © AP Photo / Spc. Zoe Garbarino
Subscribe
Ilya Tsukanov
All materialsWrite to the author
During its first month in office, the Biden administration did not reverse its predecessor's policy of keeping troops deployed in northeastern Syria to "keep the oil". On Thursday, the White House approved airstrikes against the bases of Baghdad-allied Iraqi militia groups in eastern Syria following attacks on US and coalition forces in Iraq.

Moscow has evidence of US plans to keep forces deployed in Syria indefinitely, and will ask Washington about this directly, Russian Foreign Minister Sergei Lavrov has said.

"We have recently received different information from various sources. We cannot confirm it for now, and want to ask the Americans about this directly. Supposedly, they are making the decision to never leave Syria, even to the point of destroying this country," Lavrov said, speaking to reporters at a press conference alongside Afghani Foreign Minister Mohammad Hanif Atmar on Friday.

Commenting on Thursday night's US airstrikes against "Iranian-backed" militia bases in eastern Syria, the foreign minister said that the US side only provided the Russian military a few minutes' warning before carrying out the attacks.

"Our military was warned four or five minutes ahead of time. Of course, even if we are talking about deconfliction, as is customary in ties between Russian and US military personnel, this is nothing. This was a kind of notification when the strike was already being carried out," Lavrov said.

US Carries Out Airstrikes Ordered by Biden Against 'Iranian-Backed' Groups in Eastern Syria
Military concerns aside, the Russian diplomat also suggested that it's impossible to consider the strikes separately "from the fact that the US are present on Syrian territory illegally, in violation of all norms of international law, including Security Council Resolutions on reconciliation in the Syrian Arab Republic."

Lavrov went on to blast Washington over its efforts to pressure other countries to prevent the delivery of humanitarian aid to Syria, and efforts to obstruct reconstruction efforts.

"They continue to play the separatism card. They continue to block, using their levers of pressure on other states, any supply even of humanitarian aid, not to mention equipment and materials necessary to restoring the economy in the territories controlled by the government, and in every way possible force their allies to invest in territories outside Damascus's control," he said. "At the same time, they illegally exploit Syria's hydrocarbon resources."

The historical Na’oura market in the city of Homs is currently being restored. Souk Na’oura consists of 504 shops. Of these, 134 have been restored and 100 more will now undergo restoration.

Work is also underway to restore its lighting, sidewalks, water and electricity. pic.twitter.com/XG4cvfVoxu

The foreign minister stressed that aside from the military-to-military deconfliction channel, Moscow considers it "very important" to resume Russia-US contacts on Syria at the political-diplomatic level. "We hope that the new administration will soon create its teams for this purpose," he said.

The Biden administration carried out its first airstrikes against Syrian territory on Thursday night, claiming that the attacks targeted "Iranian-backed" militia forces Washington blames for a spate of attacks against US-led forces in neighbouring Iraq, including the 15 February rocket attack on a US air base in Erbil, Iraq.

US warplanes are said to have struck multiple facilities used by Shia militia groups, including Kata'ib Hezbollah (not to be confused with the Lebanese militia force) and Kata'ib Sayyid al-Shuhada, with the Pentagon estimating that a "handful of people" were killed.

Kata'ib Hezbollah denied any involvement in the Erbil attack, with a little-known group known as Saraya Awliya al-Dam claiming responsibility. Thursday's strikes are reminiscent of the Trump administration's late 2019 attacks against Kata'ib Hezbollah targets in eastern Syria and western Iraq, ostensibly also 'in response' to rocket attacks on a US base in northern Iraq by the militia group. A month after those attacks, Iraqi military and intelligence revealed that it was likely jihadist remnants, not Kata'ib Hezbollah, which attacked the US base.

Kata'ib Hezbollah is one of dozens of Iraqi militia groups formed in 2014 to assist Baghdad and its US allies in doing the legwork to push out and crush the Daesh (ISIS)* 'caliphate'. 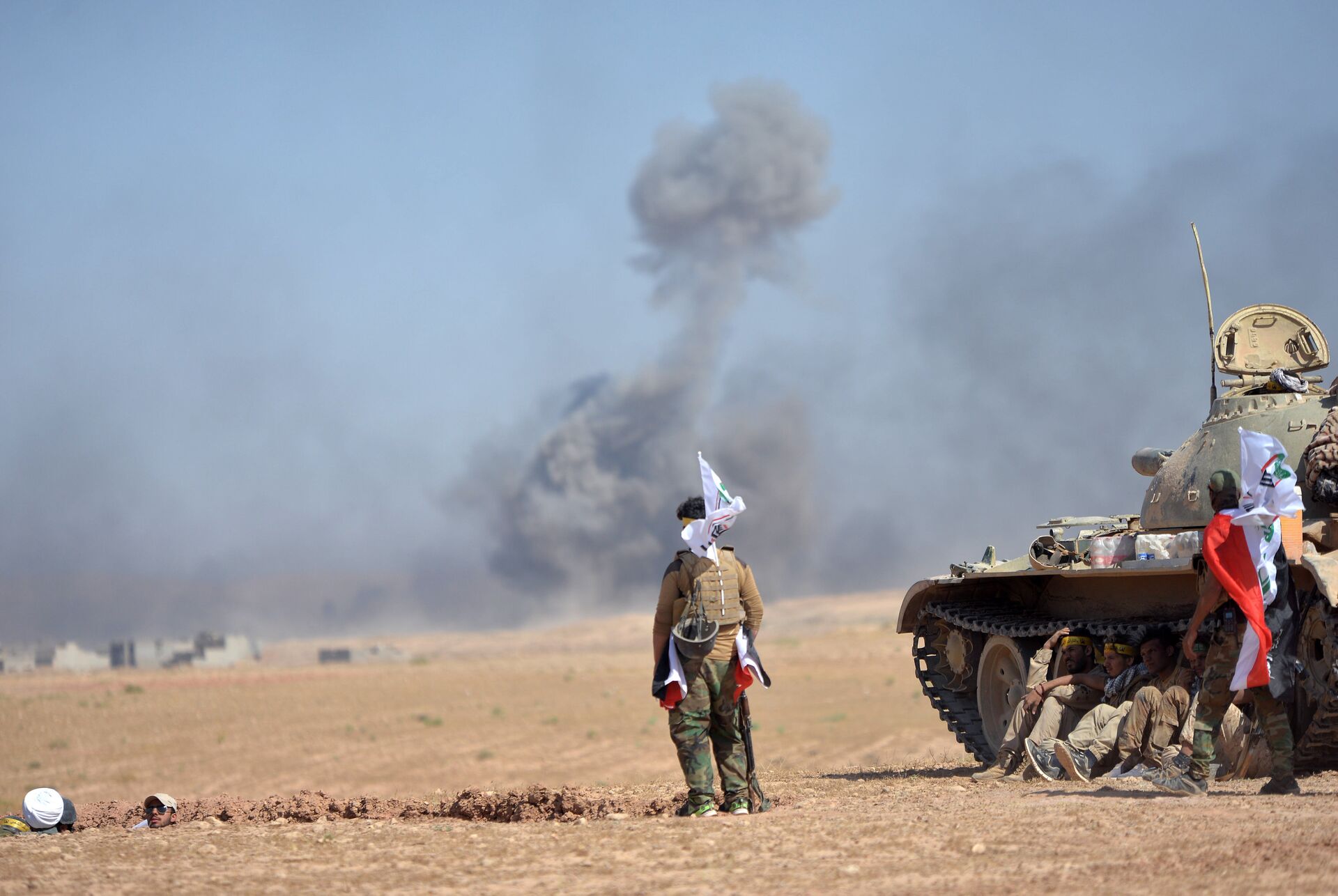 The US established a foothold in southern Syria in 2016, and US troops joined their Kurdish allies in pushing Daesh back in the country's east between 2016 and 2017. After establishing control over the territories, Washington did not allow for them to be relinquished to the Syrian government, instead helping Kurdish forces establish an autonomous quasi-state in the northeast.

Northeast Syria is home to most of the country's oil and gas resources. While modest compared to some of its Persian Gulf shiekdom neighbours, these resources were enough to ensure the country's energy self-sufficiency and earn a modest income from exports before the start of the war in 2011. During his term as president, Donald Trump stated repeatedly to the horror of the mainstream media that US forces remaining in Syria were in the country to "take the oil." The Biden administration walked backed from making such comments, but has continued to shuttle US troops and equipment into and out of northeastern Syria, and to assist the smuggling of Syrian oil out of the country. Russian military intelligence estimates that the US military, the CIA, US oil companies and Washington's Kurdish allies earn about $30 million a month on these operations. 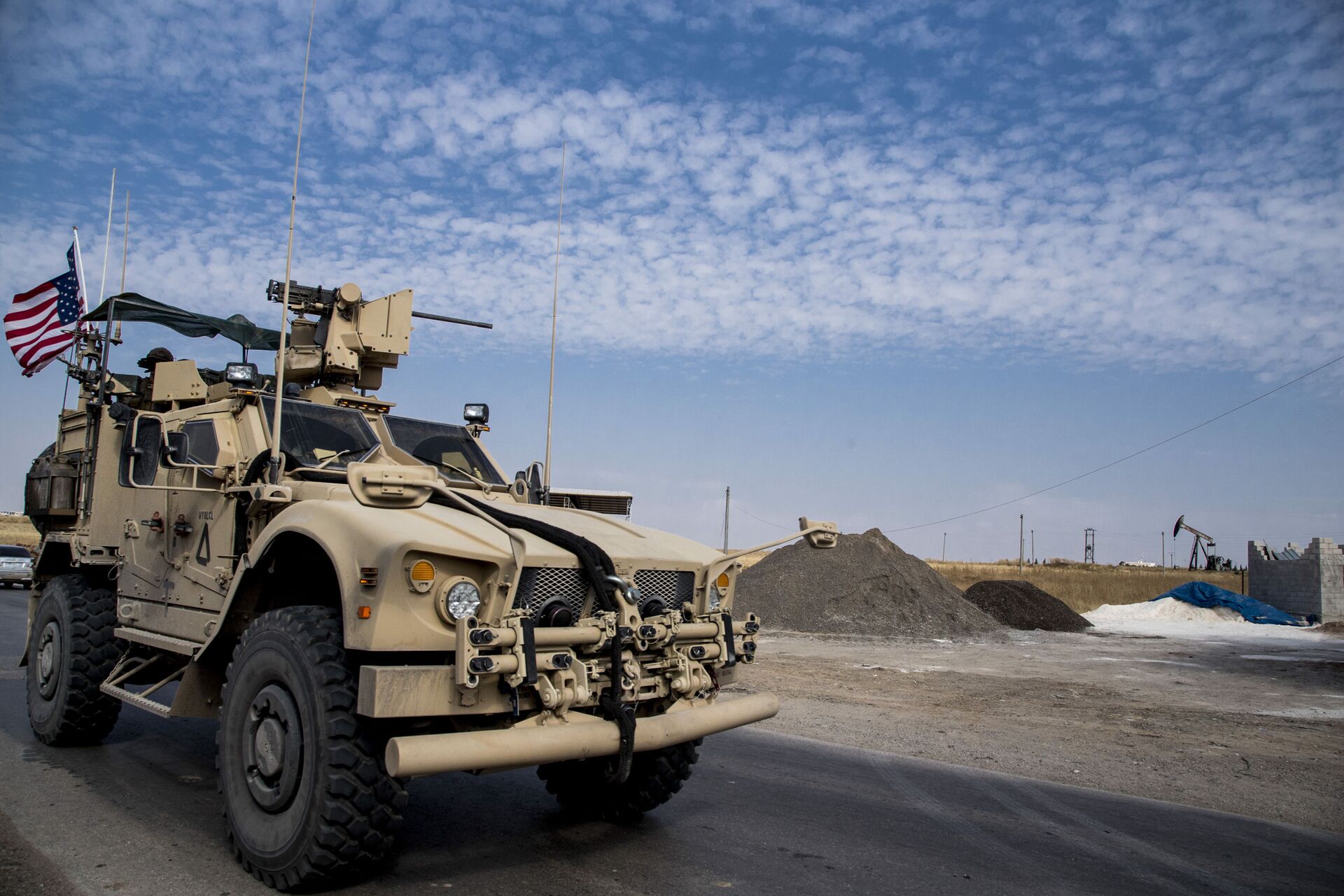 As Barack Obama's vice president, Joe Biden helped coordinate the launch of operation Timber Sycamore, a covert CIA-run weapons and training programme started in 2012 to ship thousands of tonnes of weaponry and billions of dollars in aid to 'moderate Syrian rebels' which US media investigations later revealed had allied themselves with Daesh and al-Qaeda.*

000000
Popular comments
They will fail!
Alba68
26 February, 14:31 GMT2
000000
The Future, US is a war criminal nation. What Lavrov says is old news. But guess what? US power is declining. US is so weak it can't even attack Iran because it knows it will get burned up all over the place. Try it. See what happens! Oh, BTW- you know that Russia and China have a defense alliance? US IS OVER.
BillOwens
26 February, 14:44 GMT15
000000
Newsfeed
0
New firstOld first
loader
LIVE
Заголовок открываемого материала
Access to the chat has been blocked for violating the rules . You will be able to participate again through:∞. If you do not agree with the blocking, please use the feedback form
The discussion is closed. You can participate in the discussion within 24 hours after the publication of the article.
To participate in the discussion
log in or register
loader
Chats
Заголовок открываемого материала
Worldwide
InternationalEnglishEnglishMundoEspañolSpanish
Europe
DeutschlandDeutschGermanFranceFrançaisFrenchΕλλάδαΕλληνικάGreekItaliaItalianoItalianČeská republikaČeštinaCzechPolskaPolskiPolishСрбиjаСрпскиSerbianLatvijaLatviešuLatvianLietuvaLietuviųLithuanianMoldovaMoldoveneascăMoldavianБеларусьБеларускiBelarusian
Transcaucasia
ԱրմենիաՀայերենArmenianАҧсныАҧсышәалаAbkhazХуссар ИрыстонИронауОssetianსაქართველოქართულიGeorgianAzərbaycanАzərbaycancaAzerbaijani
Middle East
Sputnik عربيArabicArabicTürkiyeTürkçeTurkishSputnik ایرانPersianPersianSputnik افغانستانDariDari
Central Asia
ҚазақстанҚазақ тіліKazakhКыргызстанКыргызчаKyrgyzOʻzbekistonЎзбекчаUzbekТоҷикистонТоҷикӣTajik
East & Southeast Asia
Việt NamTiếng ViệtVietnamese日本日本語Japanese中国中文Chinese
South America
BrasilPortuguêsPortuguese
NewsfeedBreaking
04:01 GMTTwitter Admits to Erroneously Suspending Accounts Amid a Slew of 'Coordinated and Malicious' Reports
03:41 GMTWorld Must Not Blame Africa for Undervaccination While Denying Continent Shots - Expert
03:32 GMTUS Intel Accuses Russia of Planning 'Multi-Front Offensive' Against Ukraine as Early as 2022
03:30 GMTMeet Mehmet: Dr. Oz Vying for US Senate in Pennsylvania After Trump-Endorsed Candidate Drops Out
01:45 GMTIsraeli ‘Pegasus’ Spyware Used to Hack Phones of 11 US Diplomats - Reports
01:35 GMTColorado Store Shooting Suspect Found Incompetent to Stand Trial - Reports
00:59 GMTAstronomers Spot Ultra-Dense Exoplanet Seemingly Made of Solid Iron Orbiting Nearby Star
00:41 GMTMillions Remain Long-Term Unemployed Despite Big Decline in November US Jobless Rate
00:30 GMTA Failed Biennial World Cup Could Lead to New Global Tournament
YesterdayJan. 6 Panel Postpones Jeffrey Clark Deposition Over Medical Condition
YesterdayExplosive & Nearing Dominance: What the Data Out of South Africa is Telling Us About Omicron
YesterdayOklahoma Suing Biden Admin to Exempt National Guard From Pentagon's COVID-19 Vaccine Mandate
YesterdayUS States of Maryland, Pennsylvania Confirm First Omicron Variant Cases - Statements
YesterdayGroup-IB Founder's Case Linked to Leakage of Data From Alleged GRU Hackers - Reports
YesterdayArmed Man Arrested Outside UN Charged With Making Terroristic Threat - NYPD
YesterdayMacron Postures as Peacemaker Between Lebanon, Gulf Nations After Selling UAE Fighter Jets
YesterdayUS Ends Vienna Talks, Says Iran Not 'Serious' About Meeting JCPOA Compliance Standards
YesterdayDeSantis' Idea to Create Civilian Militia He Would Control Triggers 'Gestapo' Associations Online
YesterdayVast Amounts of Explosives, Munitions Reportedly Stolen From, Lost by US Military
YesterdayRare Sight of Massive Blue Whale Yawning Filmed From Drone