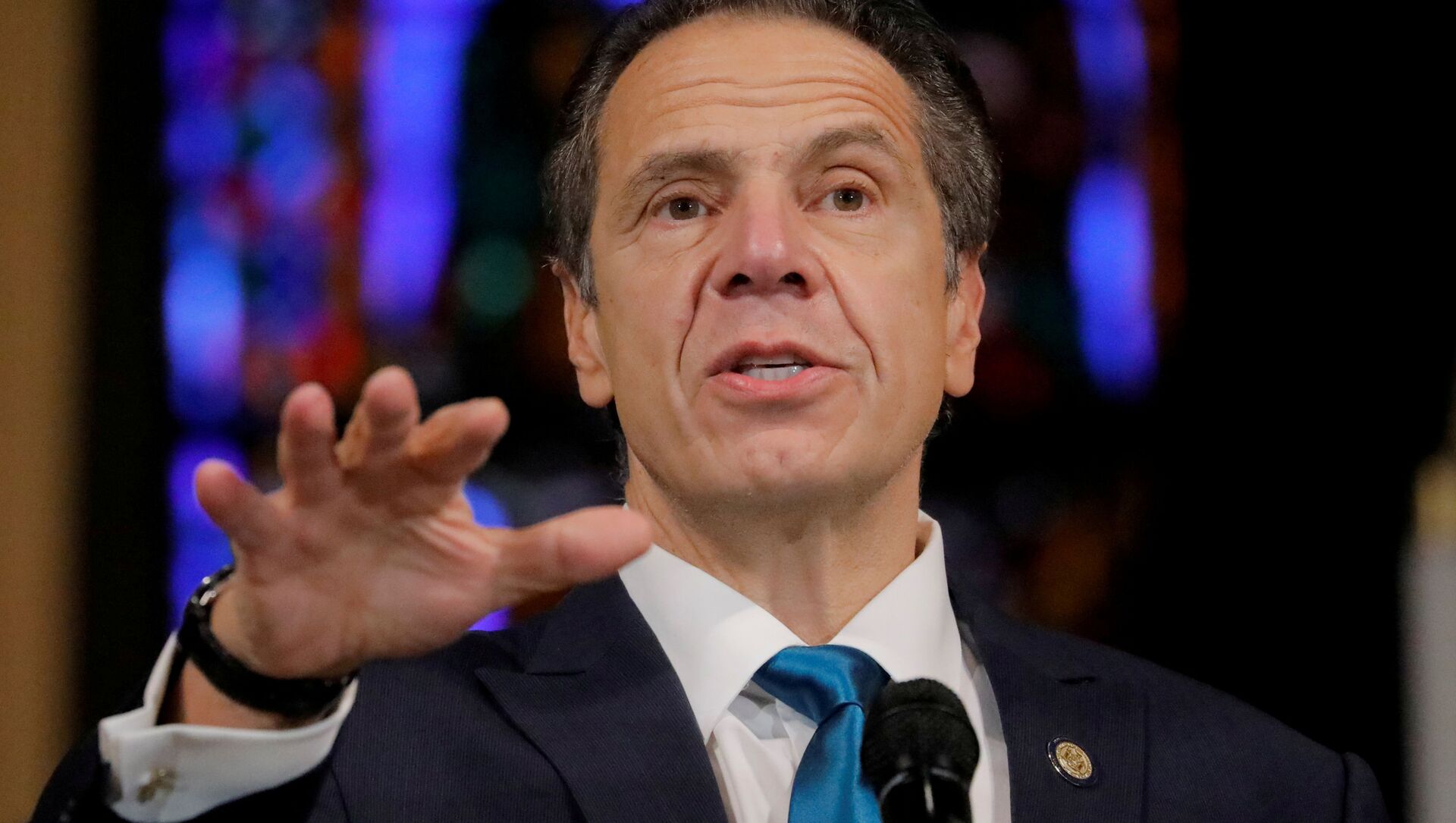 © REUTERS / ANDREW KELLY
Subscribe
Svetlana Ekimenko
All materialsWrite to the author
Embattled New York Governor Andrew Cuomo has been in the crosshairs, as along with an ongoing scandal over his office's alleged cover-up of the true coronavirus death toll at nursing homes across the state, a former aide is accusing him of sexually harassing her during her tenure in his office.

New York Governor Andrew Cuomo, who is fending off allegations of sexual harassment from a former aide in his administration, has been denounced as a ‘hypocrite’ by Rep. Nicole Malliotakis, R-NY.

Recalling an old tweet by Cuomo dating to 2018 about sexual assault allegations targeting Justice Brett Kavanaugh during the process of his confirmation to the Supreme Court, the New York governor had questioned why the future justice had not taken a polygraph test.

Here is one basic fact that badly hurts Judge Kavanaugh: Why won't he take a polygraph? Dr. Ford did.

President Trump: You can and should ask him to take the test. pic.twitter.com/aPP4xNOEB3

​He had pointed out that Christine Blasey Ford, one of the women who had come forward with the sexual misconduct claims, had taken one.

Appearing on "America’s Newsroom", Malliotakis said that the governor, who needs to provide a "lot of answers", "absolutely should" take a lie-detector test himself.

"The governor, he’s a hypocrite, it is rules for thee but not for me," Mallitokais said, pointing out that Cuomo had called for zero tolerance regarding allegations of such a nature in New York state, when an assemblyman was similarly accused in 2013.

Gov. Andrew Cuomo at the time urged that Assembly Speaker Sheldon Silver, accused of sexual harassment, should resign or be removed by the Assembly.

"These new allegations just make it more difficult for the governor to continue," said Mallitokais.

Malliotakis previously called on Cuomo to resign in the wake of the scandal surrounding allegations that his office had led a cover-up of the true coronavirus death tally at nursing homes across the state.

Andrew Cuomo continues to face criticism over his administration’s alleged mishandling of the COVID-19 situation at assisted living facilities in the state, with Mayor Bill de Blasio calling for a blue-ribbon panel to investigate the matter as “lives might’ve been saved”.

A number of investigations continue to look into the fallout from Cuomo's directive in March 2020 for nursing homes to admit COVID-19 patients.

Today I am telling my story. I never planned to share the details of my experience working in the Cuomo administration, but I am doing so now in hopes that it may make it easier for others to speak their own truth. https://t.co/n1Lcc6Ac66

​In an essay published to Medium Wednesday, Lindsey Boylan, the former deputy secretary for economic development and special adviser to the governor in 2018, claims that Cuomo constantly pursued her, kissing and touching her without her permission, making crude comments and even asked her to “play strip poker”.

According to the woman, Cuomo’s top female staffers "normalised" the behaviour. Boylan first accused the governor of sexual harassment in a Twitter thread in December.

​On 25 February the #MeToo movement board released a statement demanding an investigation into the allegations against the New York Governor.

“Allegations of inappropriate behaviour in any workplace are deeply troubling and should be addressed,” said Tina Tchen, president and CEO of TIME'S UP Foundation, in a statement.

While similarly lambasting Cuomo, American talk show The View's host Meghan McCain weighed in on the silence from other networks and prominent Democrats regarding the allegations.

“The silence of so many people in the media and so many Democratic politicians, like Kirsten Gillibrand who has been at the forefront of all sexual harassment cases and the #MeToo movement, she hasn't said anything today… So apparently, if you are Governor Cuomo and your brother is the host of a big CNN show, and you're a Democrat, then he has a complete double standard,” said McCain.

The New York governor has denied the allegations.

"As we said before, Ms. Boylan's claims of inappropriate behaviour are quite simply false," Caitlin Girouard, the governor's press secretary, said in a statement on Wednesday.