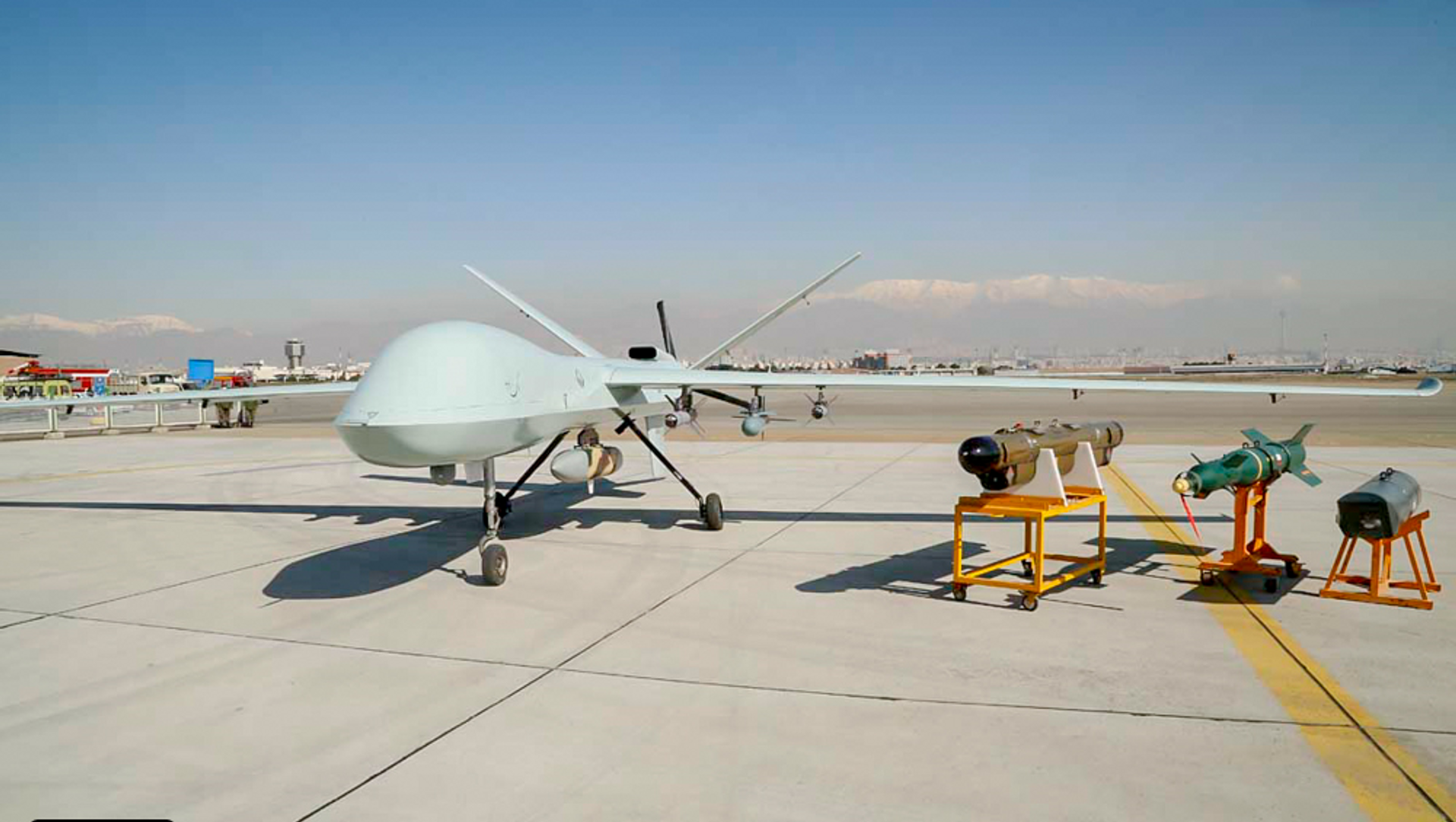 Ilya Tsukanov
All materialsWrite to the author
The Islamic Republic is one of just a handful of countries with major drone warfare capabilities, producing an entire range of unmanned aerial vehicles for reconnaissance and strike operations.

Iran has unveiled a new drone with a range of up to 3,000 km, a payload of up to 300 kg, and an endurance time of over 24 hours. The UAV is called the Kaman-22 ("Bow-22"), and is characterised by Iranian media as the first wide-body combat drone manufactured by the country’s defence industries.

The drone is said to be capable of carrying out reconnaissance, electronic warfare, and strike missions, and to be reconfigurable based on mission requirements.

Photos of the the UAV show that it appears to be capable of carrying a broad assortment of air-to-air guided munitions and air-to-ground missiles, including Sadid-guided bombs and Balaban glide bombs.

#Iran Air Force unveiled a new reconnaissance combat drone 'Kaman-22' for the first time.
This drones has the ability to carry out the long range operations with capability of carrying a variety of smart ammunitions. pic.twitter.com/mnvoDTlqTZ

The UAV features a bulbous nose, presumably containing the UAV’s avionics, along with a forward-facing antenna.

If the declared range characteristics are correct, the new drone is capable of operations almost anywhere in the Middle East. Furthermore, if launched on a suicide mission which doesn’t require its return, the drone can theoretically strike targets as far away as Central Europe, as well as North and East Africa.

US media have already rushed to dub the new drone a “rip-off” of American UAV designs, although there appears to have been some confusion about which US design was “stolen.” The Aviationist claims the drone looks like an MQ-9 Reaper, while The Warzone suggests it looks more like a Predator.

In a Twitter thread, independent Tehran-based journalist Habib Abdolhossein urged observers not to confuse the Kaman-22 with the MQ-9, and recalled that Iran has captured and reverse-engineered multiple US and Israeli UAV designs in the past, becoming “a drone power” in its own right “thanks to luck, need and ingenuity spurred by sanctions!”

A close-up of #Iran wide-body combat drone Kaman-22. Don't mistake it with US Military MQ-9 drone! #Iranians have already captured US & Israeli drones and reverse engineered them! Iran is now a drone power
thanks to luck, need & ingenuity spurred by sanctions! pic.twitter.com/rdFCniMAXn

Indeed, Iran has managed to hijack, hack into, or shoot down a variety of foreign UAVs which made the mistake of flying into Iranian airspace, bringing down a Scan Eagle, an RQ-170 Sentinel flying wing drone, and, in the summer of 2019, a stealthy $220 million RQ-4 Global Hawk, whose remnants are now on display at the National Aerospace Park in Tehran.

Interesting to see the intact RQ170 that we captured yes ago along the remnants of the Global Hawk that was downed by 3 Khordad system. This is how #Iran responds to aggression. Don't mess with us. Your hundreds of millions of dollars worth drones are incapable of harming us. pic.twitter.com/CHpC34PAyn

Iranian Air Force Commander Brig Gen. Aziz Nasirzadeh was on hand at the drone’s Wednesday unveiling, praising the design and saying it will “will contribute a high combat capability to the Air Force.”

“Today, we have attained complete maturity in production of various unmanned aircraft, including combat, reconnaissance and electronic-warfare drones that are capable of carrying several [different] missions,” he said.

Last month, the Islamic Republic carried out a large-scale drone drill, with a variety of UAVs in service with the Army, Air Defence, Air, and Naval Forces taking part.