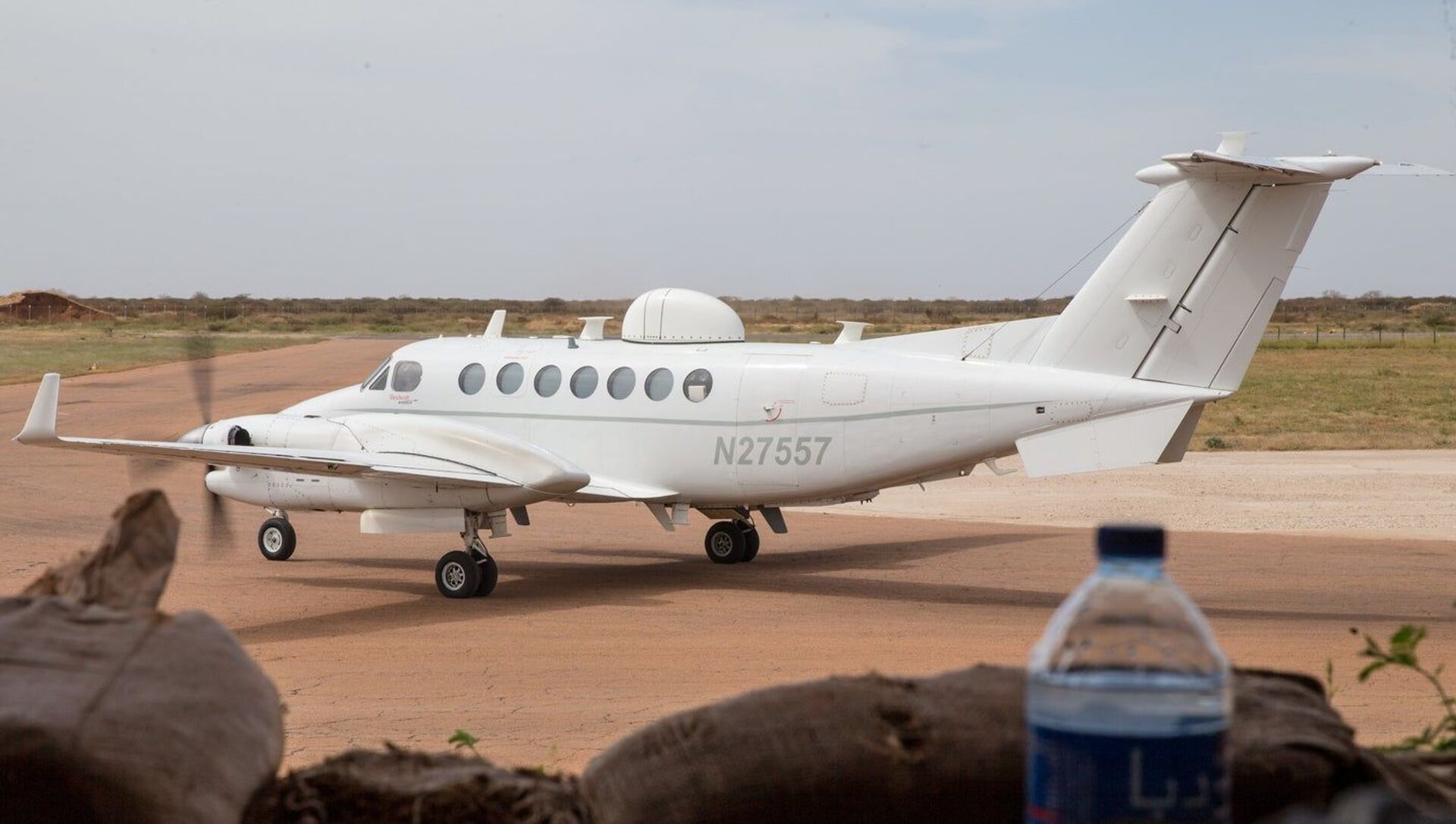 Morgan Artyukhina
All materialsWrite to the author
Washington has claimed to have totally withdrawn its military forces from Somalia, but the recent images of the type of heavily-modified private passenger aircraft used by civilian contractors points to ongoing operations of a more secretive nature in the East African nation

Among the photos and footage of the US’ massive withdrawal of roughly 700 military personnel and their equipment from Somalia, which was officially completed on January 17, observers spotted some rare images of a side of warfare not often seen. One image spotted by The Drive’s “The War Zone” features a King Air turboprop aircraft of the type used by contractors, but with a civil registration number that corresponds to no known aircraft - known colloquially as a “ghost plane.”

The plane is built by Beechcraft, a Raytheon spinoff that produces several models of airplane used variously for passenger or combat roles.

The photograph was part of a slew of images of the 15th Marine Expeditionary Unit pulling out of Baledogle Military Airfield, a former Soviet facility north of Mogadishu used by the US and Somali air forces to coordinate manned and unmanned missions against al-Shabaab and Daesh. However, after The War Zone ran its story, the image appears to have been removed from the Defense Visual Information Distribution Service (DVIDS), the Pentagon’s in-house photojournalism site. 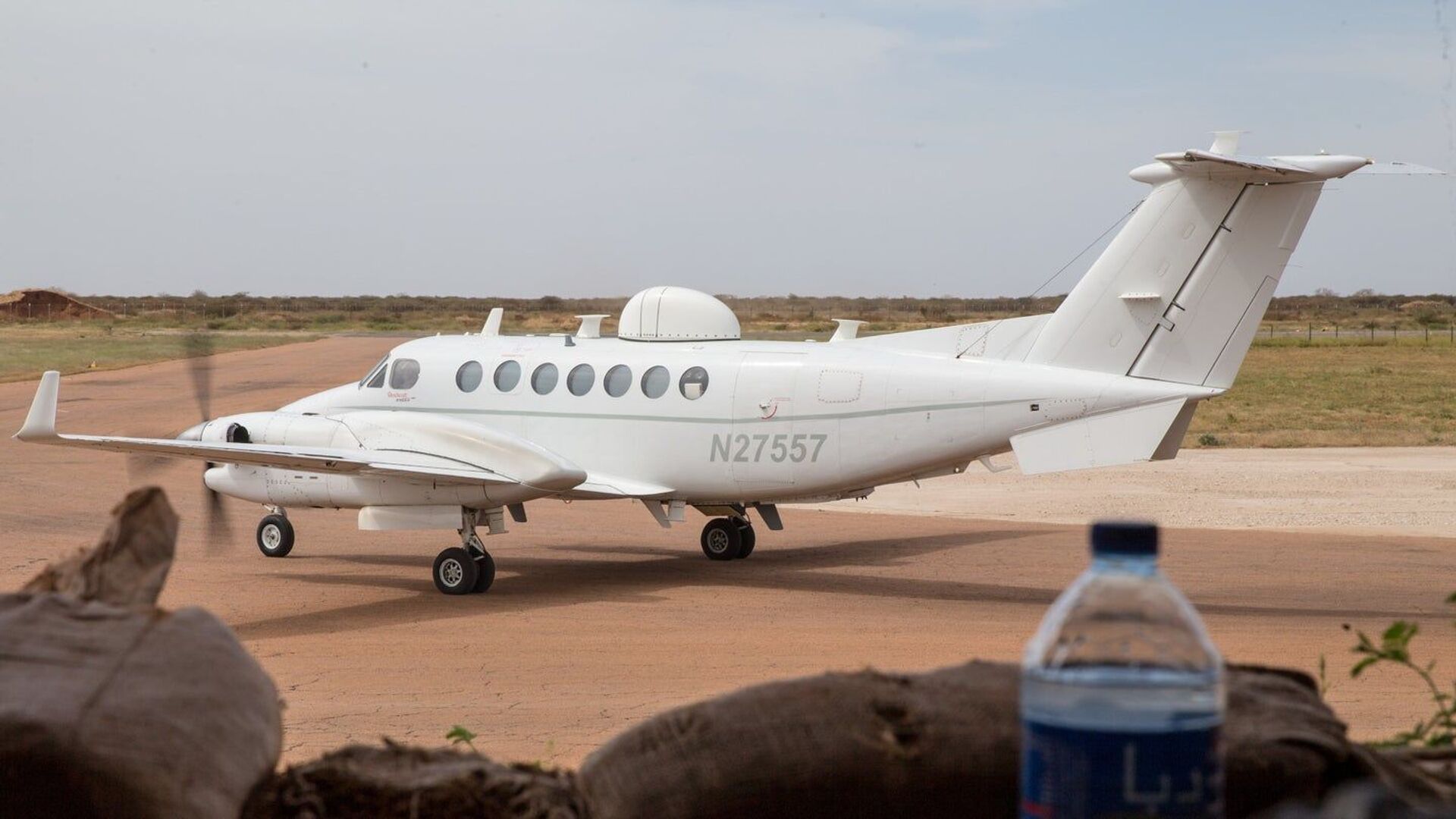 A Beechcraft King Air, heavily modified for spy missions, spotted at Baledogle Military Airfield in Somalia in late 2020 or early 2021. The plane's civil registration number doesn't belong to any known aircraft. After The War Zone published its story on February 24, 2021, the Pentagon seemingly removed the image from its public database.
© US Marine Corps, via The War Zone

According to the outlet, the aircraft’s civil registration number N27557, clearly visible in the image, is not assigned to any aircraft known to the US Federal Aviation Administration. However, a company called Gloome Aviation has apparently paid to reserve the number for a year beginning in June 2020.

The outlet tracked down the company’s listed office in South Carolina, but found it to be a facility for paper and pulp company International Paper. However, the War Zone noted that two other registration numbers known to have been reserved by Gloome have been spotted over Iraq and that call-signs used by those aircraft have also been linked to a CIA-linked group, a company called Tepper Aviation.

As for the plane itself, the War Zone identifies a host of antennae, radomes and likely camera ports signifying the aircraft’s use in intelligence, surveillance and reconnaissance (ISR) missions, as well as a possible command and control function for forces on the ground. The Pentagon is known to use civilian registered aircraft for just these sorts of missions in hotspots around the globe, including in its undeclared war in Somalia but also over the seas off China’s coast.

Over Somalia, for example, contractors L3Harris Technologies and AEVEX Aerospace have been known to operate ISR-configured De Havilland Canada Dash 8 aircraft and Gulfstream business jets on behalf of US Joint Special Operations Command. The Organized Crime and Corruption Reporting Project (OCCRP) revealed last August that these aircraft were being used to spot for drone strikes against al-Shabaab in which L3Harris contractors were part of the “kill chain.”

An al-Shabaab attack on the Manda Bay airfield just across the border in Kenya in early January 2020 succeeded in destroying one of their Dash 8s.

​The South China Sea Probing Initiative (SCSPI), a think-tank associated with the University of Peking, also revealed in November that several civilian reconnaissance aircraft were flying out of the Air Force’s Kadena Air Base on Okinawa, Japan, to run ISR missions over the Yellow Sea and both the East and South China Seas. Among the aircraft were two Bombardier Challengers operated by Tenax Aerospace Corporation and a Beechcraft King Air flown by Mater Special Aerospace Corporation, the latter of which is also known to work with US Special Operations Command.

The Trump administration’s decision to end its war in Somalia was highly unpopular among Pentagon commanders, especially from US Africa Command, who have been fighting tooth and nail against the Pentagon’s long-term plans to shift US troops away from the theater to where they can be used to confront Russia and China. Al-Shabaab is not defeated and a new Daesh franchise has sprung up in Somalia in recent years, and AFRICOM has argued that a withdrawal will take the lid off of Pandora’s box with regards to these terrorist groups.

US operations in Somalia have been justified under US law by the 2002 Authorization for Use of Military Force Against Terrorists (AUMF), a law underpinning the US War on Terror that the US has used to carry out airstrikes and other operations in several nations without declaring them formal war zones, including Somalia as well as Pakistan, Yemen, and Libya.

However, US operations haven’t truly ended in the East African country, either: US airstrikes have continued since the withdrawal and the CIA’s clandestine mission is likely continuing as well.

In November 2020, CIA agent Michael Goodboe who was in Mogadishu training Somali intelligence cadres was killed in an al-Shabaab attack. The agency has been known to operate black sites in the country where suspected al-Shabaab militants are interrogated, and a certain number of the drone strikes reported each year that are not claimed by AFRICOM are likely CIA operations, according to Amnesty International.

One way or another, uniformed or disguised aircraft operating on behalf of Washington are likely to continue to be seen over Somalia as long as the US considers fighting terrorist groups to be its job.