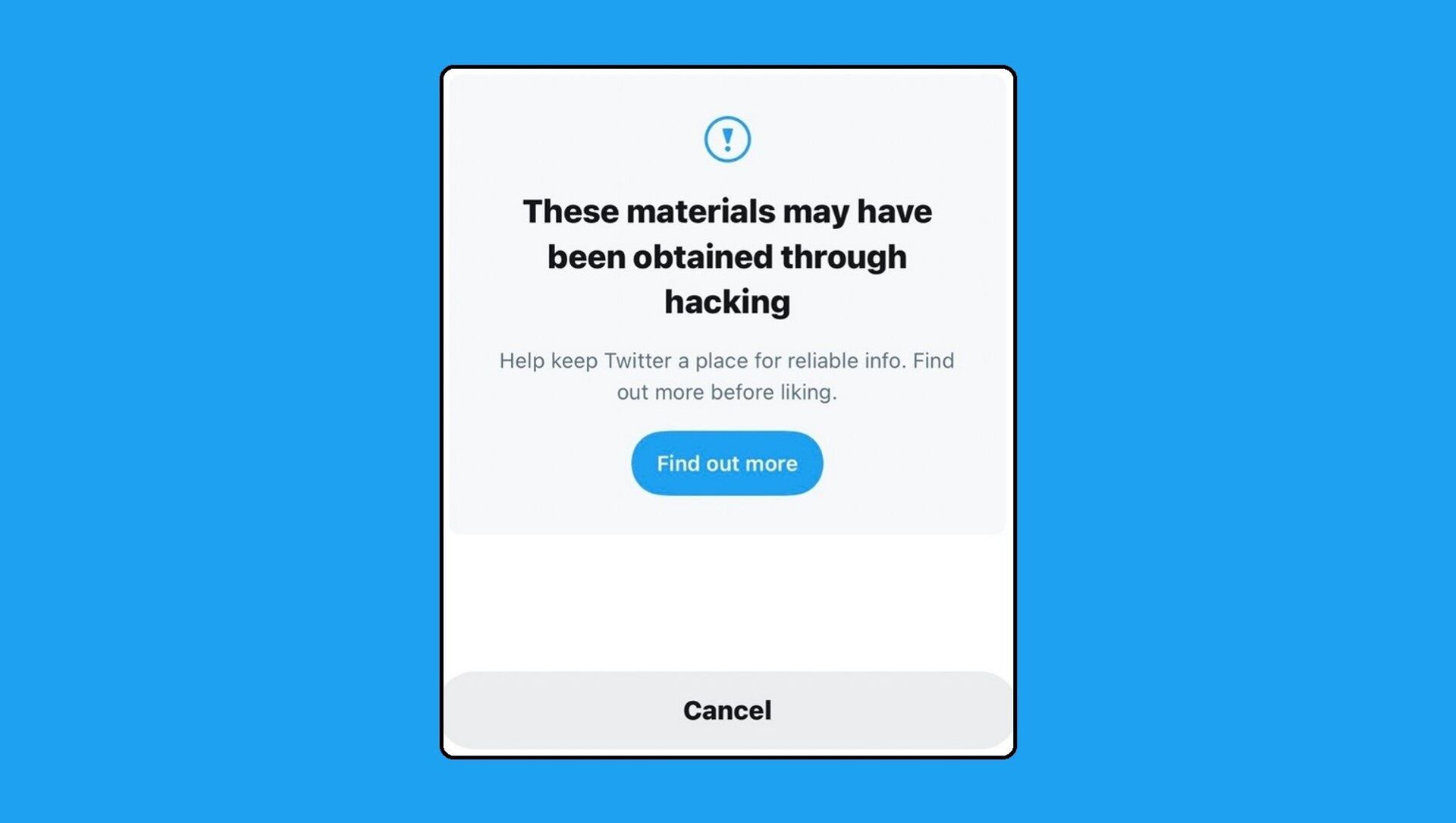 © Photo : screenshot modified by Mohamed Elmaazi
Subscribe
Mohamed Elmaazi
All materialsWrite to the author
The social media giant has once again come under fire for its role in quasi-censoring material deemed to be critical of certain establishment positions, bringing to mind the platform's initial refusal to allow people to share an alleged corruption scandal involving Hunter Biden in 2020.

Twitter has issued a warning in relation to a story about documents obtained from the UK's Foreign, Commonwealth and Development Office (FCDO), revealing a vast propaganda and psyops network aimed at "isolating" and "destabilising" the Russian government.

The warning, which reads "These materials may have been obtained through hacking", can be seen on any tweet sharing the story from The Grayzone independent media outlet, which, along with investigative journalist Kit Klarenberg via RT, published a detailed exposé on the revelations.

When a Twitter user attempted to "like" or retweet the article, an ever bigger message filled the person's screen with the same warning: 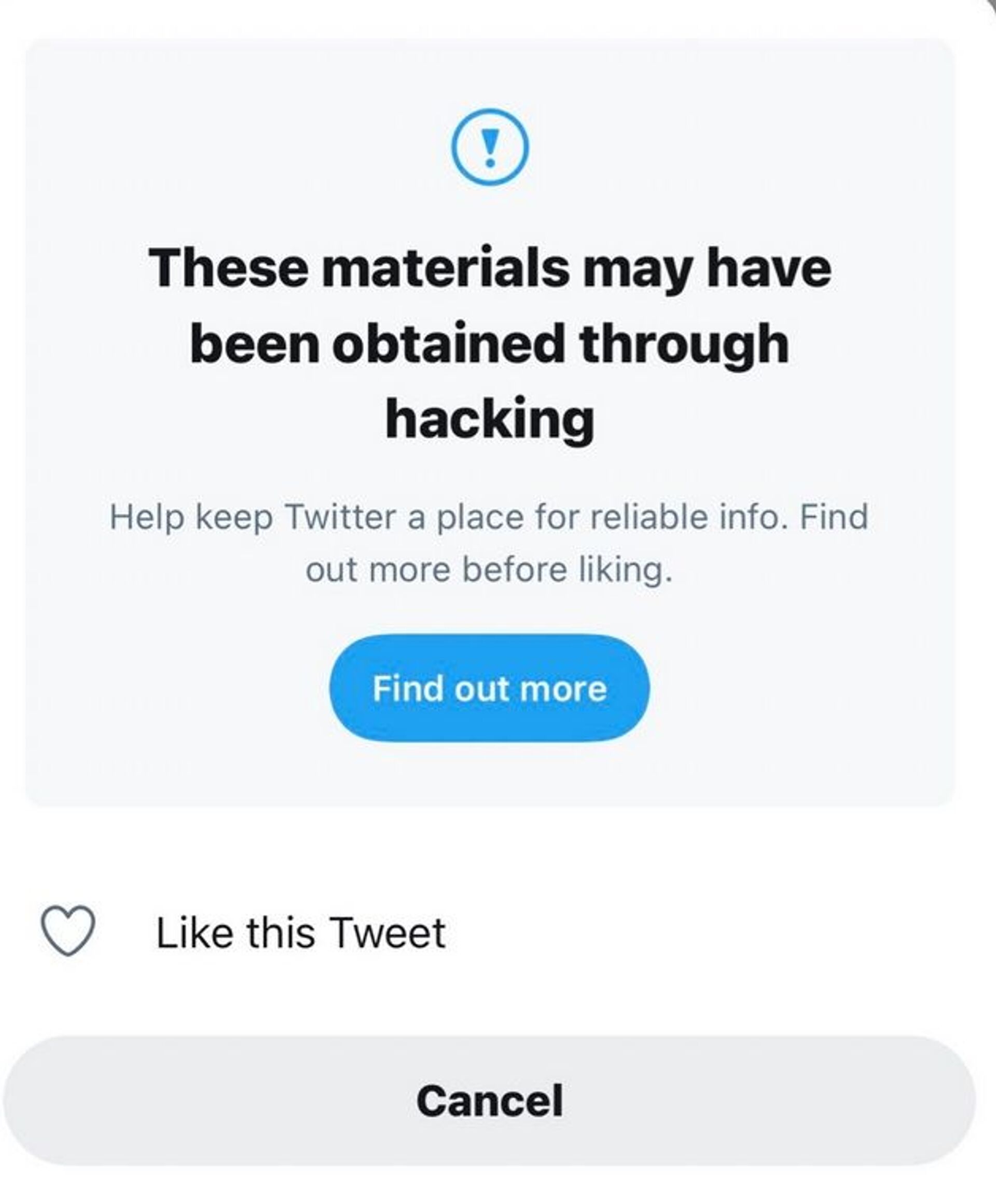 Second warning from Twitter when user attempts to like or retweet article about UK's FCDO leaked documents
© Photo : screenshot by Mohamed Elmaazi

However, since the outbreak of criticism via the social media platform, and elsewhere, this additional warning appears to have been removed, allowing users - at least those based in the UK - to like or retweet posts to the article without having to see the message a second time.

The social media site was replete with astonishment and outrage over their quasi-censorship of the story which critics say is designed to ward people off from clicking on it or sharing it.

Journalist Dan Cohen pointed out that Twitter seemed to have no problem with a January 2021 story from The Intercept, which was also potentially based on leaked or hacked documents, that allegedly revealed apparent oppression of China's Uyghur Muslim population.

Both of these articles are based on leaked/potentially hacked documents, but only one gets a warning label from Twitter.

The double-standard is clear: Information exposing the US national security state and its vassals is censored, while information targeting its enemies is not. pic.twitter.com/PNwZkLPr1H

​Others argued that "hacked documents" are "the most reliable because they come direct from the source, no spin".

Weird that Twitter's excuse for trying to limit the spread of potentially hacked info exposing the western anti-Russia propaganda machine is that hacked material is somehow unreliable. Hacked documents are the *most* reliable, because they come direct from the source, no spin. https://t.co/4GrscvIx9S

​Italian investigative journalist Stefania Maurizi also weighed in. Maurizi, who worked extensively with Julian Assange and WikiLeaks, in relation to the Afghan Diaries, the US diplomatic cables and Guantanamo detainee files to name but a few examples, argued that "it’s legitimate... to report and publish investigations based on allegedly hacked materials "as long as documents have been verified and properly assessed".

Hey @Twitter, it’s legitimate to investigate,report and publish investigations based on allegedly hacked materials as those published by @MaxBlumenthal @graysone: it’s legit journalism as long as documents have been verified and properly assessed: https://t.co/C5R1ByemHm https://t.co/KYrpbSGMa1

UK Foreign Office Docs Reveal 'Full-Spectrum' Psyops to 'Destabilise Russia', Journalist Says
This incident brings to mind the first known example of such a warning in relation to Twitter and Facebook's outright censorship over the October 2020 Hunter Biden story. The article, published by the New York Post, alleged pay-for-play corruption between the current president's son and a Ukrainian energy firm. In the Hunter Biden case, documents were reportedly obtained from a laptop that he left to be serviced and then forgot about.

​At the time, Twitter justified its censorship of the article on the basis that a policy from 2018, "prohibits the use of our service to distribute content obtained without authorisation", because the social media giant doesn't want to "incentivise hacking by allowing Twitter to be used as distribution for possibly illegally obtained materials". The company ultimately backtracked and permitted the story to be shared, after an intense backlash.

Former constitutional lawyer Glenn Greenwald, known for his role in revealing mass-NSA and GCHQ surveillance by publishing classified documents provided by Edward Snowden, was among the many to warn that Twitter's actions were a bad omen for independent and investigative journalism which critiques certain establishment narratives and positions.

Look carefully at what Twitter is saying to justify censoring the Biden story. If applied consistently, it’d mean that some of history’s most consequential journalism — the Pentagon Papers, WikiLeaks’ war logs, Snowden docs, Panama Papers, our Brazil Archive — would be banned. pic.twitter.com/pQziZr1qwT

Please don’t be deceived. The authoritarian mindset expressed below — celebrating mass censorship of journalism they dislike — is absolutely a significant strain in current US liberalism, which is why so many of them cheered the stunning censorship yesterday: pic.twitter.com/Mz4R8GKUcv

In 2018, Ben Nimmo, a fellow at the Atlantic Council's Digital Forensic Research Lab (DFRLab), appeared to confirm that Twitter was working with his organisation, following suit from Facebook which also announced the same year that it had teamed up with NATO's unofficial think tank to moderate content. 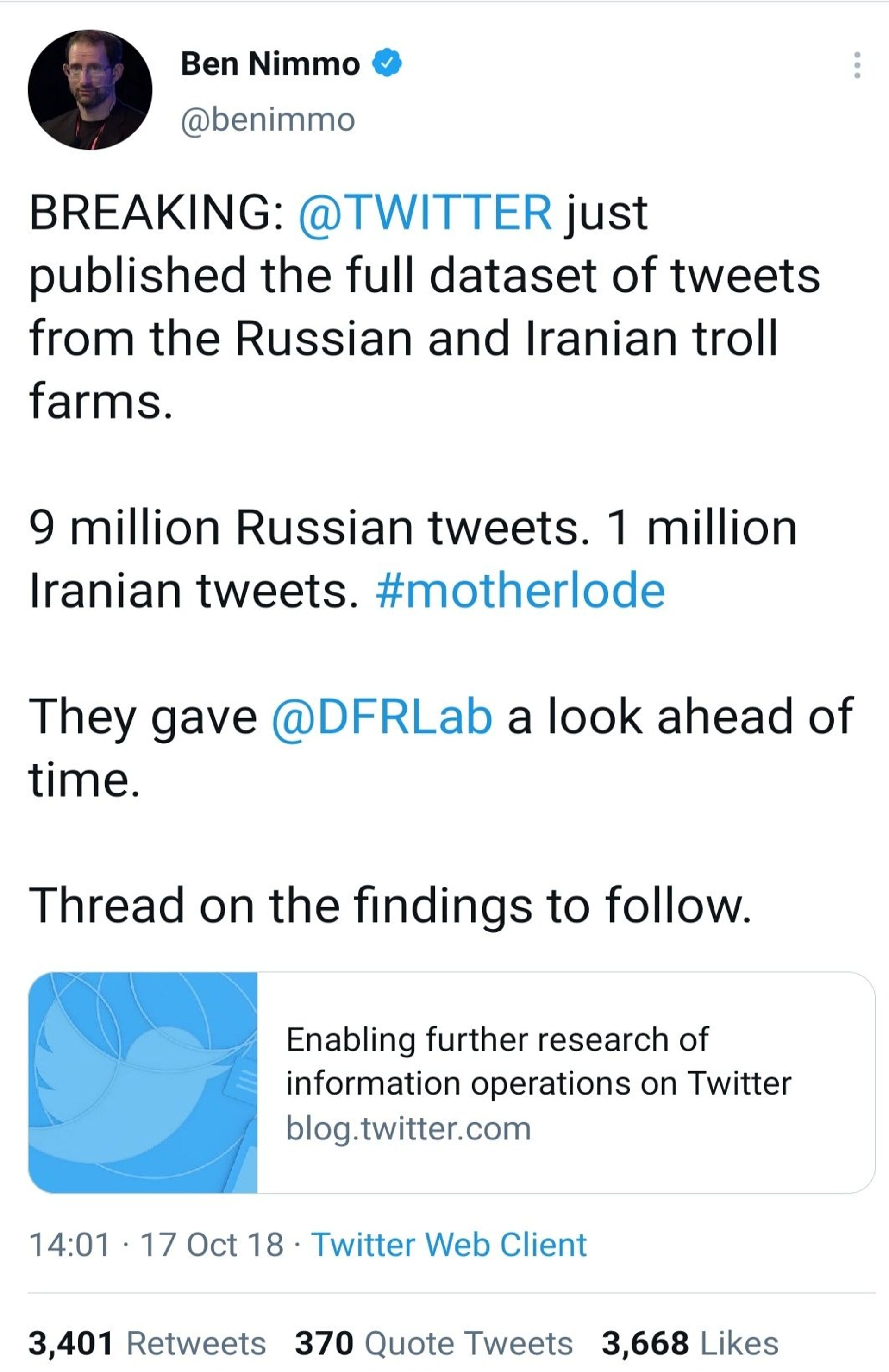 Ironically, at the time Twitter announced its policy as one grounded in, "transparency and with the goal of improving understanding of foreign influence and information campaigns", the very kind of disinformation or influence operations that the latest batch of FCDO documents reveal. As of the afternoon of 24 February, Twitter has completely removed the warning in relation to new posts of the story "after the article went viral", according to Grayzone journalist Aaron Maté.

*This article was updated at 15:12 GMT on 24 February to note that Twitter has since removed the warning in relation to The Grayzone article.