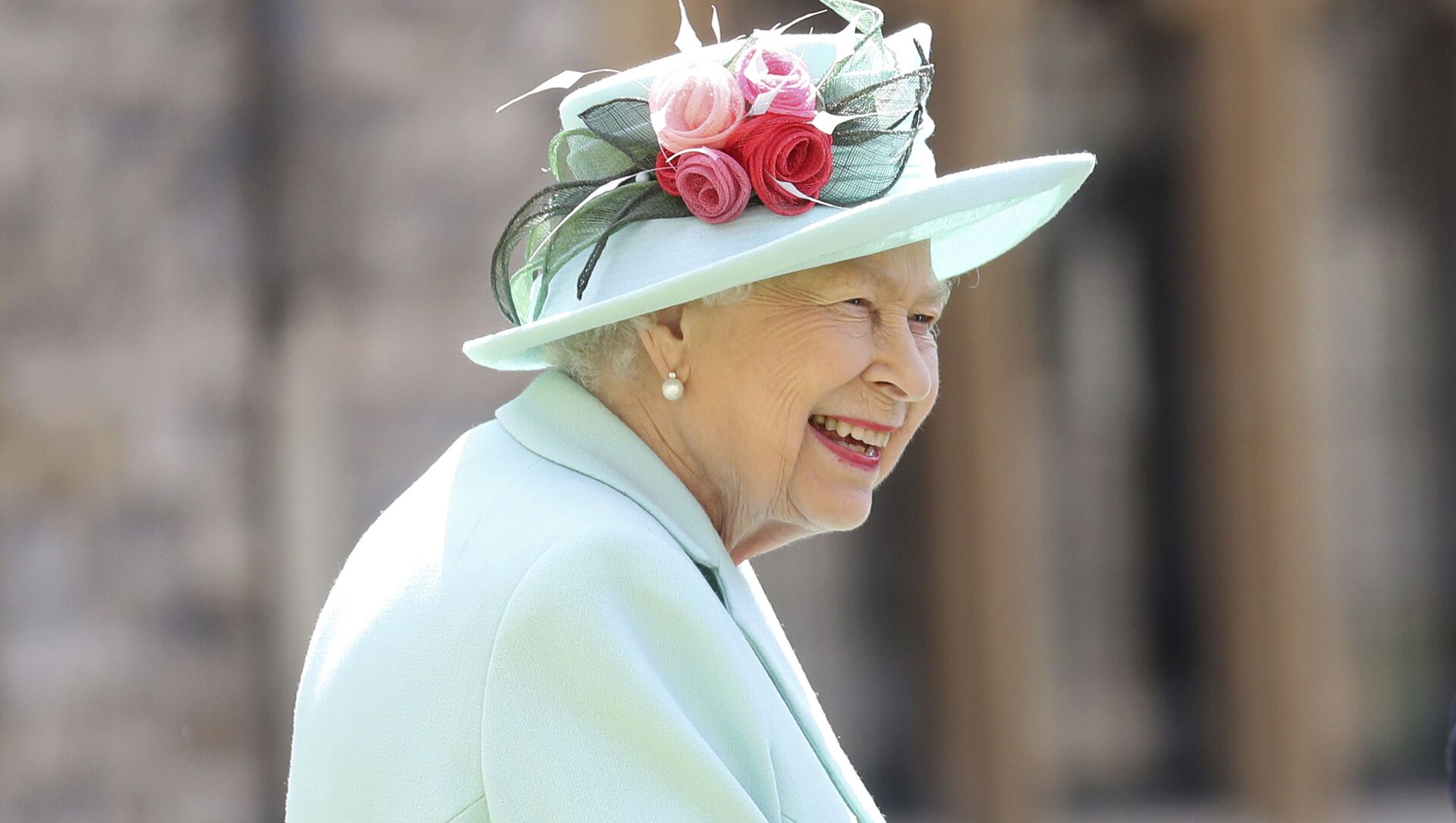 © AP Photo / Chris Jackson
Subscribe
Svetlana Ekimenko
All materialsWrite to the author
Millionaire landowner and playboy Simon Bowes-Lyon, the present Earl of Strathmore and Kinghorne and first cousin twice removed of The Queen, was jailed for 10 months for sexual assault at his home, Glamis Castle in Scotland, and placed on the sex offenders’ register after the incident in February 2020.

Simon Bowes-Lyon, the 19th and 6th Earl of Strathmore and Kinghorne, who has just started a 10-month jail term for sexual assault on a female guest at his home, Glamis Castle in Scotland, previously joked about being the "Monster of Glamis", reported The Daily Telegraph.

First cousin twice removed of Queen Elizabeth II, the millionaire who was named one of Britain’s 50 most eligible bachelors by Tatler magazine in 2019 reportedly made the reference to the ghost which is believed to haunt his ancestral home just hours before the violent sex attack on the 26-year-old victim.

​According to lore, Glamis Castle is haunted by at least nine ghosts, the most blood-curdling of all being the Monster of Glamis. Legend has it that this was a 19th-century heir to the earldom who was stashed away in a secret room all his life because of his terrifying deformities.

Royal relative the Earl of Strathmore has been jailed for 10 months for sexually assaulting a woman at his family castle https://t.co/s6zxwIYb6Q pic.twitter.com/9ueLIuNJMf

​When asked about the Monster of Glamis in February 2020 by guests, Bowes-Lyon, 34, ostensibly replied:

Hours later, after indulging in a night of heavy drinking, the Queen Mother's great-great-nephew carried out a sexual assault on a female guest - whose name has not been revealed for legal reasons - in one of the grand bedrooms.

Bowes-Lyon, who admitted to attacking the woman and was up for sentencing at Dundee Sheriff Court on 23 February, issued a statement outside court.

“I am greatly ashamed of my actions which have caused such distress to a guest in my home. When I realised what I had done I apologised quickly to the woman concerned… Clearly, I had drunk to excess on the night of the incident. I recognise, in any event, that alcohol is no excuse for my behaviour,” the earl said.

The millionaire, who will remain on the sex offenders' register for a decade, added:

“I did not think I was capable of behaving in the way I did but have had to face up to it and take responsibility. Over the past year this has involved seeking and receiving professional help as well as agreeing to plead guilty.”

000000
Popular comments
Before this incident, I'd think that he had carried out numerous such acts before with various degree of violence. Money and his position has kept him out of legal troubles. A prince charming.
iamanyam
24 February, 19:59 GMT1
000000
Newsfeed
0
New firstOld first
loader
LIVE
Заголовок открываемого материала
Access to the chat has been blocked for violating the rules . You will be able to participate again through:∞. If you do not agree with the blocking, please use the feedback form
The discussion is closed. You can participate in the discussion within 24 hours after the publication of the article.
To participate in the discussion
log in or register
loader
Chats
Заголовок открываемого материала
Worldwide
InternationalEnglishEnglishMundoEspañolSpanish
Europe
DeutschlandDeutschGermanFranceFrançaisFrenchΕλλάδαΕλληνικάGreekItaliaItalianoItalianČeská republikaČeštinaCzechPolskaPolskiPolishСрбиjаСрпскиSerbianLatvijaLatviešuLatvianLietuvaLietuviųLithuanianMoldovaMoldoveneascăMoldavianБеларусьБеларускiBelarusian
Transcaucasia
ԱրմենիաՀայերենArmenianАҧсныАҧсышәалаAbkhazХуссар ИрыстонИронауОssetianსაქართველოქართულიGeorgianAzərbaycanАzərbaycancaAzerbaijani
Middle East
Sputnik عربيArabicArabicTürkiyeTürkçeTurkishSputnik ایرانPersianPersianSputnik افغانستانDariDari
Central Asia
ҚазақстанҚазақ тіліKazakhКыргызстанКыргызчаKyrgyzOʻzbekistonЎзбекчаUzbekТоҷикистонТоҷикӣTajik
East & Southeast Asia
Việt NamTiếng ViệtVietnamese日本日本語Japanese中国中文Chinese
South America
BrasilPortuguêsPortuguese
NewsfeedBreaking
21:43 GMTUS Transport Sec Buttigieg Wriggles on Ridiculed 'Racist Roads' Comments
21:05 GMTNew Jersey School to Remove President Woodrow Wilson's Name Over Racism Legacy
21:01 GMTTrump's Super PAC to Hold Biggest Fundraiser Yet Amid Biden's Sinking Polls - Report
20:56 GMTFrance Blames UK for Channel Drownings for Being 'Too Attractive' to Migrants
19:46 GMTWHO: Data Insufficient to Conclude Omicron More Dangerous Than Delta
19:02 GMTUS Reportedly Sends Two Military Convoys to Syria Consisting of Over 100 Vehicles
18:24 GMTTaiwan Scrambles Jets to Fend Off 27 Chinese Military Aircraft
18:09 GMTBelarusian Security Council Says Kiev Stirring Up Migration Issue to Get Money From West
18:03 GMTPresident Ramaphosa Delivers Speech on South Africa's COVID Fight Amid Spread of Omicron Strain
17:52 GMTSouth African Doctor Says 'Mild' COVID-19 Variant Omicron Already 'Seeded' in UK
17:38 GMTPoll: Kamala Harris & Michelle Obama Dems' Top Choices for 2024 Race If Joe Biden Decides Not to Run
17:27 GMTHunter Biden Received 3-Carat Diamond on Top of $10M a Year Deal With Chinese Businessman, Book Says
17:17 GMTWill the Maxwell Trial Expose Epstein's Rich & Powerful Friends or Turn Into Another Cover-Up?
17:12 GMTSouth Africa's Health Minister Unhappy With International Reaction to Omicron Strain
16:32 GMTKremlin: Anti-Russian Campaign Could Be Used to Distract From Kiev’s Possible Military Op in Donbass
16:11 GMTGermany Warns US Congress Nord Stream 2 Sanctions Will 'Damage Transatlantic Unity', Docs Show
15:54 GMTPrince Harry Lashed Out at Prince William Who Asked Him Not to Rush Things With Meghan, Book Claims
15:45 GMTPoland Ready to Help Finance Return of Migrants Stuck at Border With Belarus to Home Countries
15:05 GMTTwo Iranian Seamen 'in Good Health' After Being Rescued by US Navy Ship in Gulf
14:51 GMTThe Omicron Strain: What is Known About New COVID-19 'Variant of Concern'