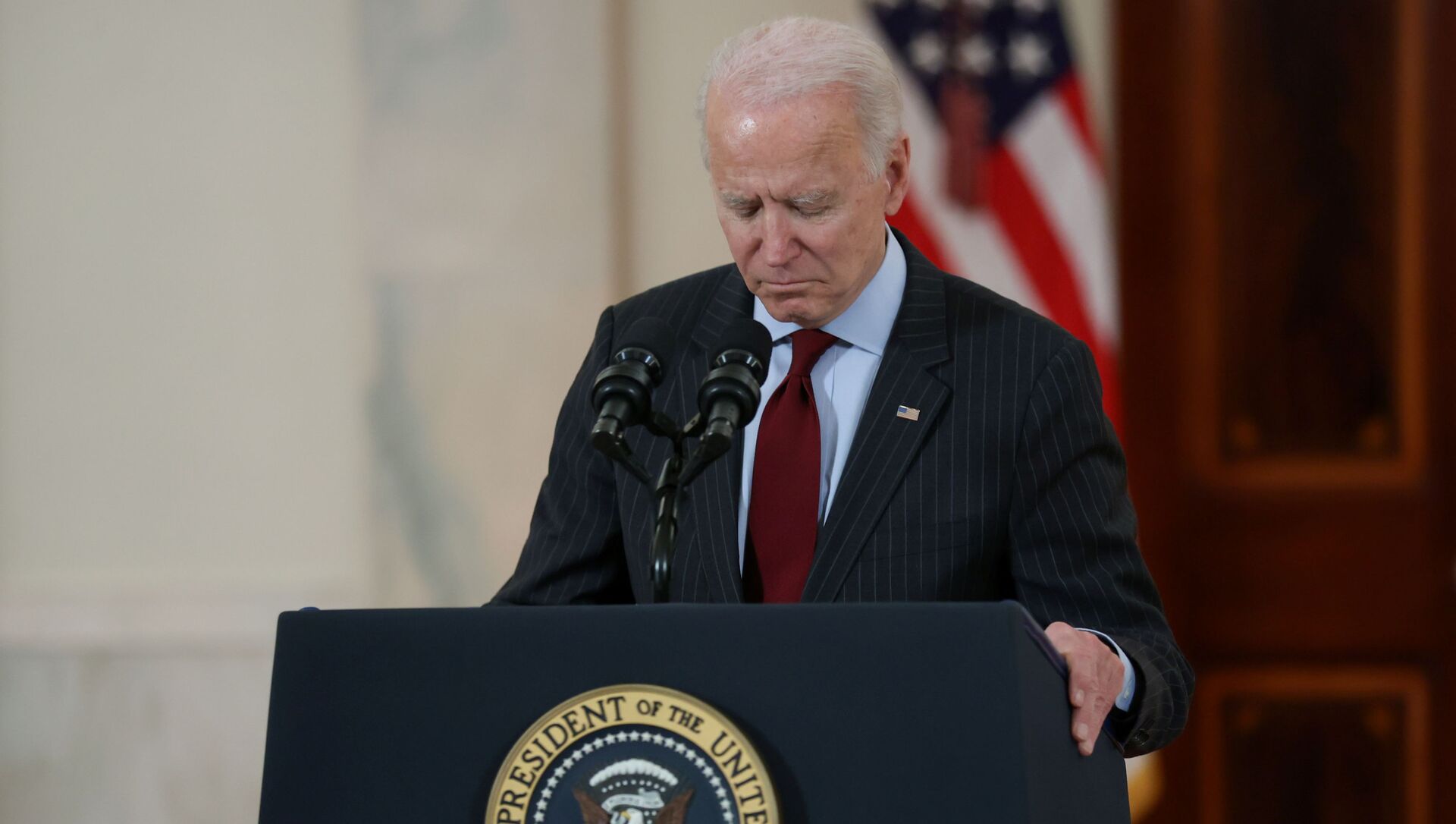 Aleksandra Serebriakova
Moscow-based Sputnik correspondent specializing in foreign affairs.
All materialsWrite to the author
Incumbent US president was previously the one who said during the August 2019 town hall meeting in Iowa that “poor kids” were just as intelligent as “white kids” - the phrase that has sparked a lot of questions among observers.

It was probably just a gaffe when Joe Biden used a hateful slur during his video appearance at the Munich Security Conference on Saturday. But many who analysed his speech were left uncomfortable after hearing a problematic N-word from the Democrat president.

Toward the end of Biden’s 18-minute speech viewers heard:

“Look, the range of challenges Europe and the United States must take on together is broad and complex. I am eager to hear, nig**r [sic] here next from my good friends and outstanding leaders such as [the German Chancellor Angela] Merkel about her thoughts and the way forward.”

As the moment was pointed out by journalists, a lot of media users felt awkward. Some suggested that the gaffe was a result of Biden’s unfortunate attempt to repeat “eager to hear” one more time or simply a “mental typo” of which he has had many in the past.

But others were pretty confident that the lapse was unpardonable: after all, what would happen if it had been ex-Republican president Donald Trump who made the mistake?

Biden slipped and said the N-word live on CNN yesterday and where’s the outrage from the anti-racism crowd? pic.twitter.com/mRYETey0K2

Did he seriously drop the "N" word?!
Where's the outrage from the media and BLM???!!!

Imagine if Trump had this sort of misspeak

He says "eager to hear". This really is fake news. I can't stand Biden and the Dems but people shouldn't be mendacious, even though the Dems have mastered that to a tee

Probably a mistake, but imagine if that was Trump

Biden’s “fact checkers” scurrying to clear this up pic.twitter.com/U3hJ4UECOF

Well he must make a LOT of mistakes then because even in the run up to the ejection he was saying a lot of similar stuff. “Poor kids could be just as intelligent as white kids” being just one of them.

The problem is that it’s not the first time Biden’s babbling has prompted many to accuse the president of racist inclinations. Back in August 2019, Biden said during a town hall meeting in Iowa - hosted by the Asian and Latino Coalition - that “poor kids are just as bright and just as talented as white kids”.

“Wealthy kids, black kids, Asian kids — no I really mean it, but think how we think about it,” he continued after a short pause but his words had already stuck in many minds.

Biden’s campaign managers made an ill-fated attempt to save the situation:

“Vice President Biden [sic] misspoke and immediately corrected himself during a refrain he often uses to make the point that all children deserve a fair shot, and children born into lower-income circumstances are just as smart as those born to wealthy parents,” his deputy campaign manager Kate Bedingfield said at the time.

Months later, Biden made another racially charged “slip”: speaking to a crowd in Milwaukee in his first Town Hall speech as US president, Biden suggested that many members of the Hispanic and the African community could not get COVID jabs because they did not know how to “get online”- a remark that received a strong backlash all over the net.

000000
Popular comments
From what I hear in that excerpt, Biden says he is “eager to hear”. The word n...r would not make sense in the context. While Biden certainly makes a lot of gaffes and is at heart a white colonialist, in this case I think people ran with threadbare cloth. Yes, if such a mumbled word had been said by Trump - even when it was clear he didn’t say it - all hell would break lose. With Biden, ironically, he always gets away by writing things off to his advanced age and proneness to scrambled words. But in this case I believe he said “eager”. I am not a Biden supporter and not a Democrat. But it is necessary to not invent stuff if Repubs want to maintain credibility.
Regula
23 February, 19:39 GMT4
000000
He celebrated 500,000 American death by COVID the other day. ----------------------------what he said it was MENTAL F.rt. Mental F.rt occurs to show your true standing with race.
Chamroosh
23 February, 21:57 GMT3
000000
Newsfeed
0
New firstOld first
loader
LIVE
Заголовок открываемого материала
Access to the chat has been blocked for violating the rules . You will be able to participate again through:∞. If you do not agree with the blocking, please use the feedback form
The discussion is closed. You can participate in the discussion within 24 hours after the publication of the article.
To participate in the discussion
log in or register
loader
Chats
Заголовок открываемого материала
Worldwide
InternationalEnglishEnglishMundoEspañolSpanish
Europe
DeutschlandDeutschGermanFranceFrançaisFrenchΕλλάδαΕλληνικάGreekItaliaItalianoItalianČeská republikaČeštinaCzechPolskaPolskiPolishСрбиjаСрпскиSerbianLatvijaLatviešuLatvianLietuvaLietuviųLithuanianMoldovaMoldoveneascăMoldavianБеларусьБеларускiBelarusian
Transcaucasia
ԱրմենիաՀայերենArmenianАҧсныАҧсышәалаAbkhazХуссар ИрыстонИронауОssetianსაქართველოქართულიGeorgianAzərbaycanАzərbaycancaAzerbaijani
Middle East
Sputnik عربيArabicArabicTürkiyeTürkçeTurkishSputnik ایرانPersianPersianSputnik افغانستانDariDari
Central Asia
ҚазақстанҚазақ тіліKazakhКыргызстанКыргызчаKyrgyzOʻzbekistonЎзбекчаUzbekТоҷикистонТоҷикӣTajik
East & Southeast Asia
Việt NamTiếng ViệtVietnamese日本日本語Japanese俄罗斯卫星通讯社中文（简体）Chinese (simplified)俄罗斯卫星通讯社中文（繁体）Chinese (traditional)
South America
BrasilPortuguêsPortuguese
NewsfeedBreaking
00:25 GMTNetanyahu on Facebook Mocks Biden’s Alleged Nap During Talks With Israeli PM Naftali Bennet
Yesterday‘Crisis Crisis’: Trump Says US Becoming ‘Cesspool of Humanity’ Over Border Situation
YesterdayFBI: Human Remains Found in Wyoming 'Consistent With Description' of Missing Gabby Petito
YesterdayFrance-UK Defense Minister Meeting Canceled Over AUKUS Fracas - Report
YesterdayFrench Highliner Stops Parisians’ Hearts Crossing Seine 200 Feet Up
YesterdayUnited Russia Leads in Russian General Election With 42% of Vote
YesterdayCelebs Go Skating Host Hopes to Sign Prince Harry & Meghan Markle for the Show, Media Says
YesterdayLetters From Jehovah’s Witnesses in England Blame COVID Pandemic on Satan, Media Says
YesterdaySatellite Snaps Appear to Show Expansion of North Korea’s Nuclear Bomb-making Capabilities
YesterdaySylvain Mbappe: Satirical Website Offers Alternatives to 'Non-French' Names
YesterdayUnited Russia Party Leads in Parliamentary Elections With Over 12% of Ballots Counted - Exit Poll
YesterdayRussian Embassy in Paris Says Checks Info About Russian Man Arrested for Shooting Air Gun
YesterdayVoter Turnout in Russian Parliamentary Elections Exceeds 45%
YesterdayMany Haitians in Texas Border Camp Unwilling to Leave Despite US Deportation Plans
Yesterday‘Are You Undercover?’ Watch Police Detain Suspicious Man with Badge and Gun at DC Protest
YesterdayTaliban Fighters Seen Riding Swan-Shaped Pedal Boats - Photo
YesterdaySeveral Injured as Military Plane Crashes in Lake Worth, Texas, 'Heavily Damaging Two Homes'
YesterdayDaesh Claims Responsibility For Attacks in Eastern Afghanistan
Yesterday800+ Naked Swimmers Celebrate Approach of England's Autumn Equinox
YesterdayUS National Whelan Tells Family About Physical Assault in Russian Prison