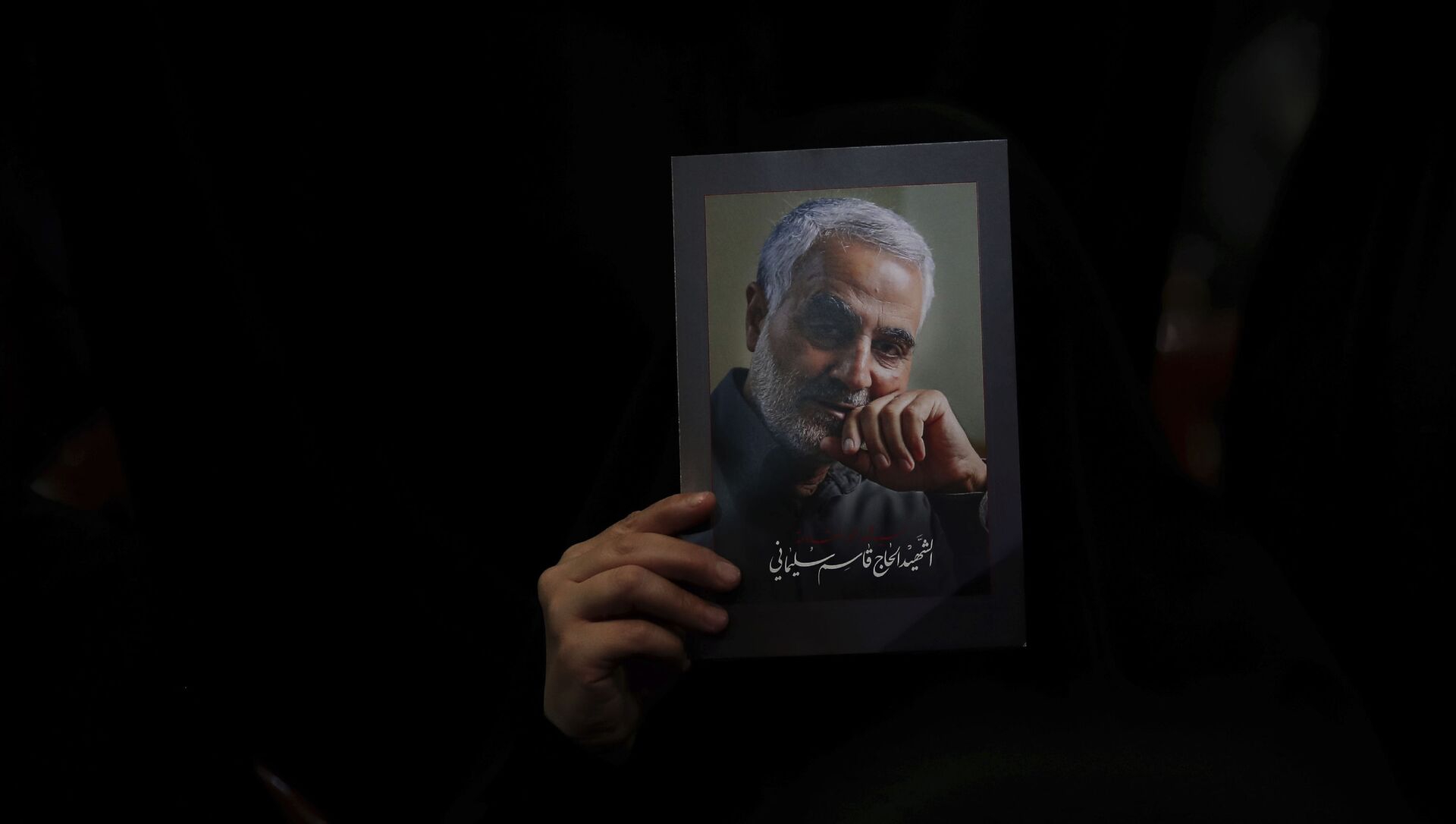 © AP Photo / Hassan Ammar
Subscribe
Ilya Tsukanov
All materialsWrite to the author
Qasem Soleimani, longtime commander of the Islamic Revolutionary Guard Corps’ elite Quds extraterritorial fighting force, was killed in a US drone strike attack in Baghdad in January 2020. Tehran reacted by lobbing over a dozen ballistic missiles at US bases in Iraq, and has promised further “slaps” of revenge at the time and place of its choosing.

IRGC commander and Iranian Armed Forces Chief of Staff Maj. Gen. Mohammad Bagheri has warned Washington’s Gulf State allies that they share complicity in Qasem Soleimani’s death, since they allowed the US to use their bases.

“He was not hit with an ordinary bomb, but with a bomb that's used to target armoured equipment. The bomb that hit General Soleimani’s car can cut 30 cm deep into steel…They committed such a crime to tear their bodies apart,” Bagheri said, speaking at a conference in Tehran on Tuesday, his remarks cited by PressTV and Mehr News.

“Who did this? America, as they have announced. Who has helped the US? Bases situated in Saudi Arabia, Qatar and Bahrain provided intelligence aid. The aircraft took off from military bases in Kuwait, Jordan and Iraq and targeted [Soleimani’s] vehicle,” the commander added, while promising that Iran would make every effort to hold these nations accountable.

“We will provide each of these countries with the documents so that they could not deny their direct role in this crime,” he said.

Bagheri also confirmed previously reported information that Soleimani was in Iraq in January to discuss a Saudi proposal to reduce tensions between Tehran and Riyadh.

“He was a foreign guest in Iraq. He was carrying a message in response to an earlier message of Saudi Arabia and the Iraqi prime minister. He had openly entered Iraq on a civilian passenger plane,” the senior officer said.

Bagheri made the comments at a conference on Iran’s legal claims related to the Iran-Iraq War of 1980-88.

Ebrahim Raisi, the Iranian Judiciary Chief who has been investigating the actors thought to be involved in Soleimani’s killing, stressed that the “cowardly” assassination “will not remain unanswered.”

Iran’s Foreign Minister Applauds Iraq’s Arrest Warrant for Trump Over Soleimani Killing
Raisi added that Western countries including France, the UK and Germany “violated human rights by participating in Saddam [Hussein’s] invasion of Iran,” and “must be tried” for assisting the Iraqi government in its effort to obtain chemical weapons used against Iran’s troops and cities during the war.

Last month, Iranians marked the one year anniversary of the 3 January drone strike assassination of Soleimani. Due to his penchant for fighting radical Islamist militias, the Quds Force commander was one the most popular Iranian political and military figures in the region, among both religious and secular forces. During his 20-year tenure as commander of the Quds, Soleimani battled Islamists ranging from the Taliban* and al-Qaeda* to Daesh*, occasionally even indirectly cooperating with Washington by working with Kurdish forces in northeastern Syria. At the same time, he repeatedly accused Washington of collaborating with the jihadists for the sake of its strategic goal of destabilising the region.