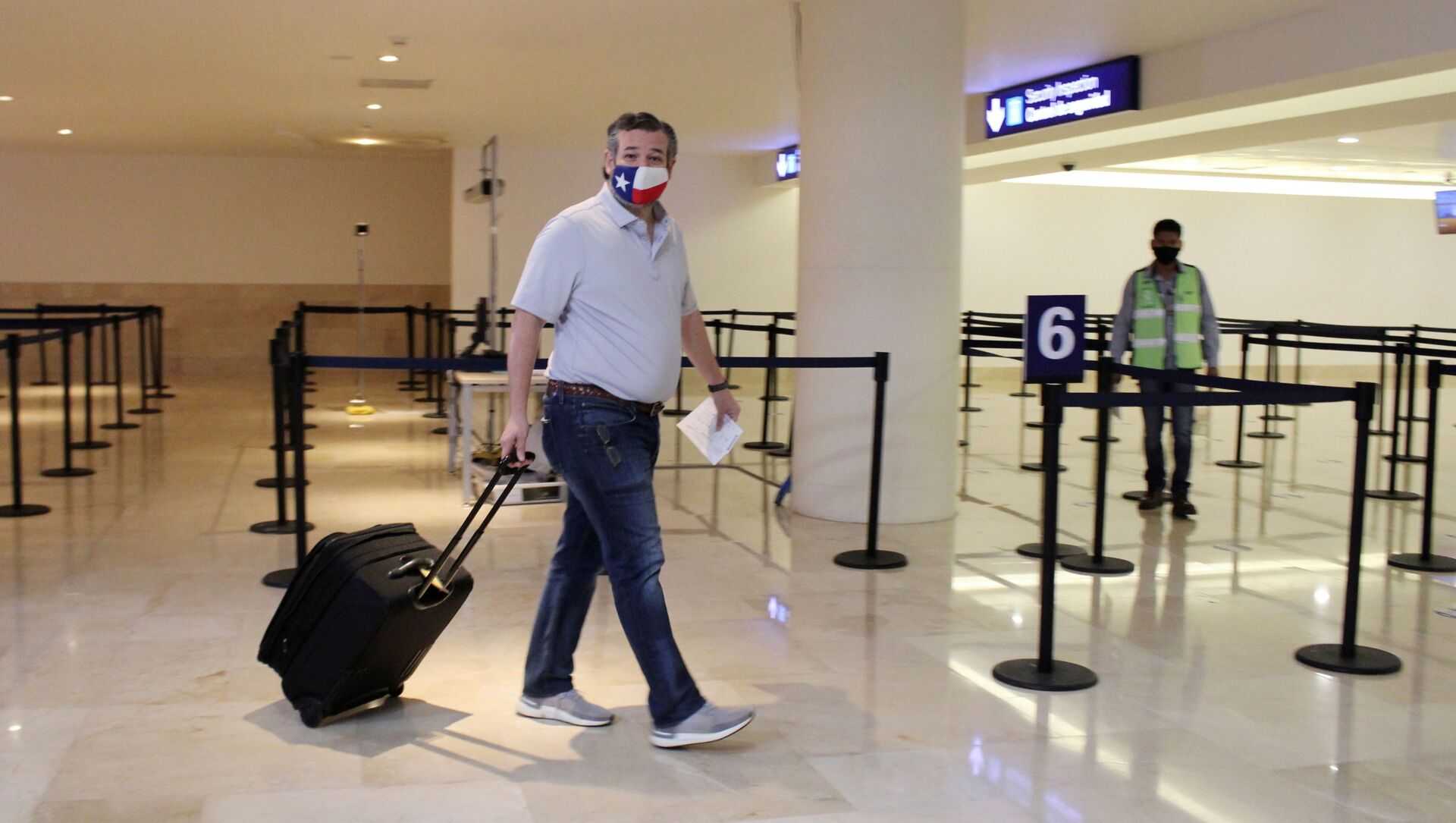 Kirill Kurevlev
Correspondent
All materialsWrite to the author
Republican Senator Ted Cruz of Texas came under a whirlwind of criticism after he was spotted at an airport while on his way to catch a flight with his kids to Cancun, Mexico, this week while Texas was experiencing hardships due to an abnormal snowstorm, which brought extremely low temperatures, causing a disaster for the residents of the state.

United Airlines is investigating who leaked data exposing when US Senator Ted Cruz initially intended to return to his home state of Texas, which was hit by a severe snowstorm when the lawmaker left for Cancun, Mexico, Politico reported Saturday.

​“It’s against United’s policies to share personal information about our customers and we are investigating this incident,” the outlet quotes United Airlines' executive. The executive noted the most severe measures could be taken against the leaker.

The United executive reportedly said there are no "off the table" options, but it depends on the result of the investigation and whether the employee who revealed the information would definitively be identified.

Prior to that, a reporter on the Skift travel news website, Edward Russell, claimed in a Twitter post that he had spoken to unnamed source from the airline who said Cruz had "rebooked his flight back to Houston from Cancun for this afternoon at around 6 am today [which was Thursday]. He was originally scheduled to return on Saturday."

According to the report, to better serve clients, thousands of the airline's employees have access to customer flight data, but leaks about the flight plans of individual travelers are quite uncommon in the industry.

At first, following the scandal, Cruz insisted on Thursday that his travel to Cancun was at the behest of his daughters amidst a power and water crisis in Texas and evaded a straight answer to the question of when he initially intended to return, claiming soon after that it was a one-day trip just to take his daughters on a vacation.

Addressing the criticism and the allegations of him being tone-deaf, Cruz said in a statement that he ruled the trip in those circumstances as an "obvious mistake" and that he was "trying to be a dad" for his girls who were released from school due to the weather conditions.

"It was obviously a mistake. In hindsight, I wouldn't have done it. I was trying to be a Dad," Sen. Ted Cruz says after receiving criticism for flying to Mexico with his family during a major winter storm in Texas. pic.twitter.com/y8x22DxTgA

Journalist Yashar Ali, who took the photo of Cruz returning to the US, referring to the leak of Cruz's flight information, tweeted that the alleged source in the airline company has been "put in danger of being fired with [that] tweet."

That guy claiming to have a United source is putting that source in danger of being fired with his tweet.

Airlines track every single keystroke of their agents or anyone else who has access to flight records.

​Furthermore, the Politico report states, travel reporters found that a "CRU, R." was on the upgrade standby list for the flight from Cancun to Houston on Thursday afternoon, three hours before Cruz released his statement saying he was returning to Texas. While they are not widely publicized, such update lists are publicly available.