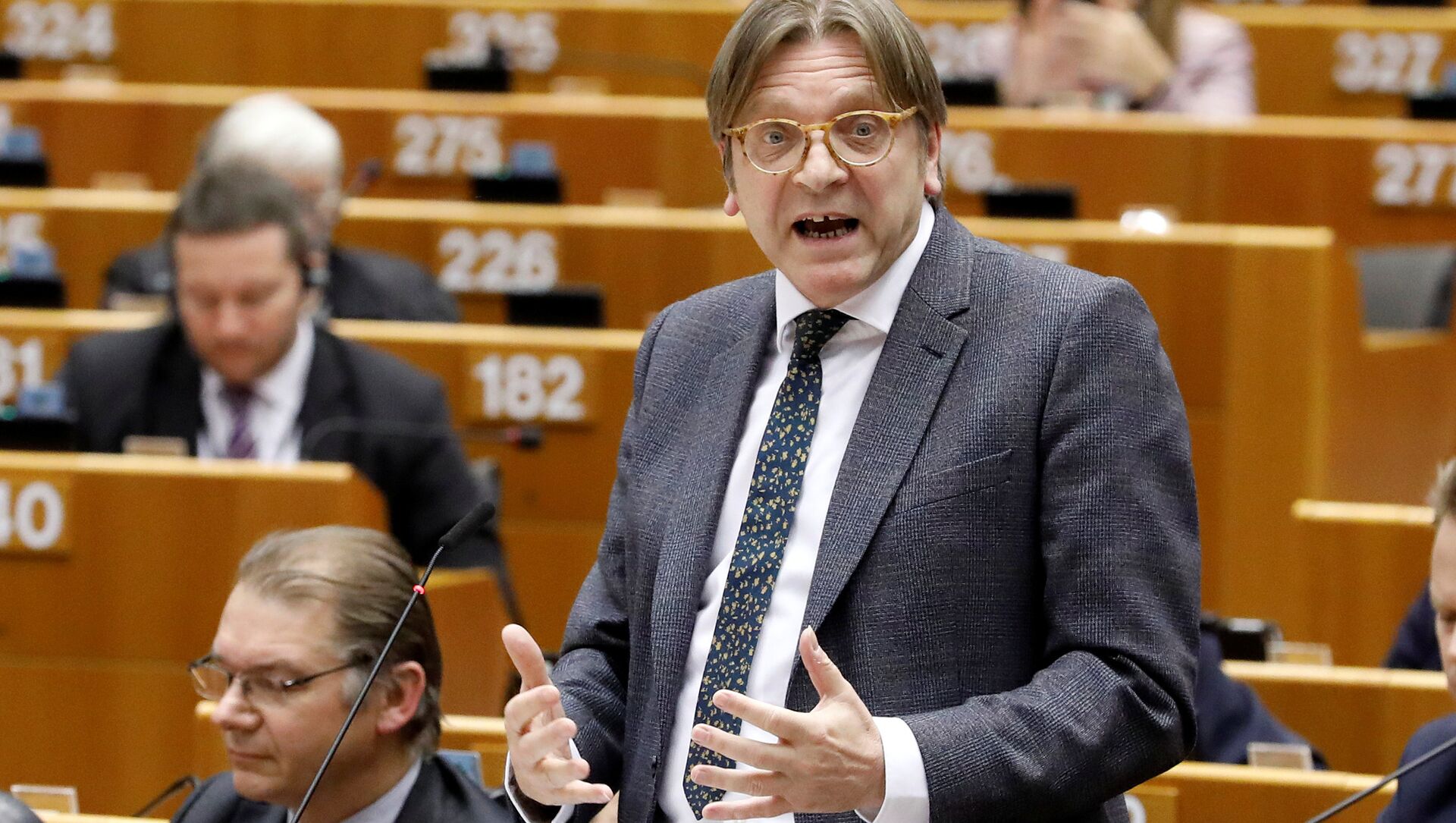 James Tweedie
All materialsWrite to the author
The European Commission has already caught flak over its "farcical" centralised vaccine-buying programme. But leading Euro-federalist Guy Verhofstadt found a new line of attack, pointing out that its contract with AstraZeneca was full of holes compared to that of the the watertight British "speedboat".

One of the European Union's top cheerleaders has blamed its powerful Commission for defeat in the 'Vaccine War' with the UK.

In a blog post on Friday, MEP and former Belgian prime minister Guy Verhofstadt accused the European Commission of handing victory to post-Brexit Britain by failing to negotiate a cast-iron contract with Anglo-Swedish vaccine producer AstraZeneca — and paying hundreds of millions upfront to fund production that went to Britain.

Italian public broadcaster RAI published the UK's contrast with Astrazeneca on Thursday, weeks after the EU released a redacted version of its own contract with the firm. That came after Commission President Ursula von der Leyen threatened to sue the firm and force it to divert supplies of its Oxford University-developed jab from Britain to the continent.

Verhofstadt scorned early reports that the two texts were near-identical, stressing: "The devil is in the detail".

Unlike the EU's contract, the UK's stipulates in article 13.2.9 that the firm “shall not enter into any agreement with any foreign government, funder or third party that would by its terms conflict with AZ’s obligation,” Verhofstadt pointed out.

And he highlighted that the British deal relied on production at AstraZeneca's two UK facilities in Oxford and Wrexham, Wales, which the firm assured in the contract was enough to meet demand. But the EU's contract was vague once again, referring to the "overall supply chain, without special emphasis on the fulfillment of the EU-wide demand for doses."

Von der Leyen has drawn harsh criticism — particularly in her home country of Germany — for her disastrous management of EU vaccine procurement, which she insisted must centralised under the commission's control. The resulting delays have seen the British "speedboat" immunise its population seven times faster than the EU "tanker".

Earlier this week Verhofstadt, one of the most strident critics of Brexit, branded Commission von der Leyen's performance "farcical" — especially the former German defence minister's disastrous attempt to wage a 'vaccine war' on the UK over the slow pace of deliveries from AstraZeneca.

The Commission chief was forced into a humiliating after she ordered the land border between the Republic of Ireland and the UK closed — without consulting either country's government — in a bid to stop German firm Pfizer honouring its contract to supply vaccines to Britain.

Another key difference between the two contracts is the delivery schedule, which is "precisely" set out in terms of delivery dates and volumes for the UK but only speaks of an “estimated time schedule” for the EU.

World
Rich Countries Bought Over a Billion More COVID-19 Vaccines Than Needed, According to Analysis

And the MEP also dealt with the claim that British PM Boris Johnson's government jumped the queue by offering to pay more per dose. While AstraZeneca has only charged a "Cost of Goods" price for its vaccine — forgoing a profit — the UK contract gives the firm "Open Book" flexibility to add on unforeseen costs, "conversely giving the UK authorities leverage, through the open book method, to oblige AstraZeneca to fulfill its commitments".

Verhofstadt also criticised the Commission's much-vaunted "investment" in the AstraZeneca jab, which von der Leyen claimed last month entitled it to the lion's share of production.

"The EU has paid €336 million [£291 million, $407 million] upfront to support production, before the products existed and had been authorised," Verhofstadt wrote. "The UK however only pays on invoice 30 days after delivery. So in effect the EU has helped pre-fund the production of vaccines that the UK only has to pay for afterwards."

Verhofstadt also scotched the widely-reported narrative that the EU lost out by coming late to the negotiating table, pointing out that the UK signed its contract for the Oxford vaccines a day after the EU did.

"The balance of power tilts notably towards the UK," Verhofstadt wrote. "Considering the timing and difference in approach of the two contracts, this appears to be no coincidence."

He concluded that the damage to public trust in the EU from the fiasco meant "both the Commission and AstraZeneca have a lot of explaining to do."