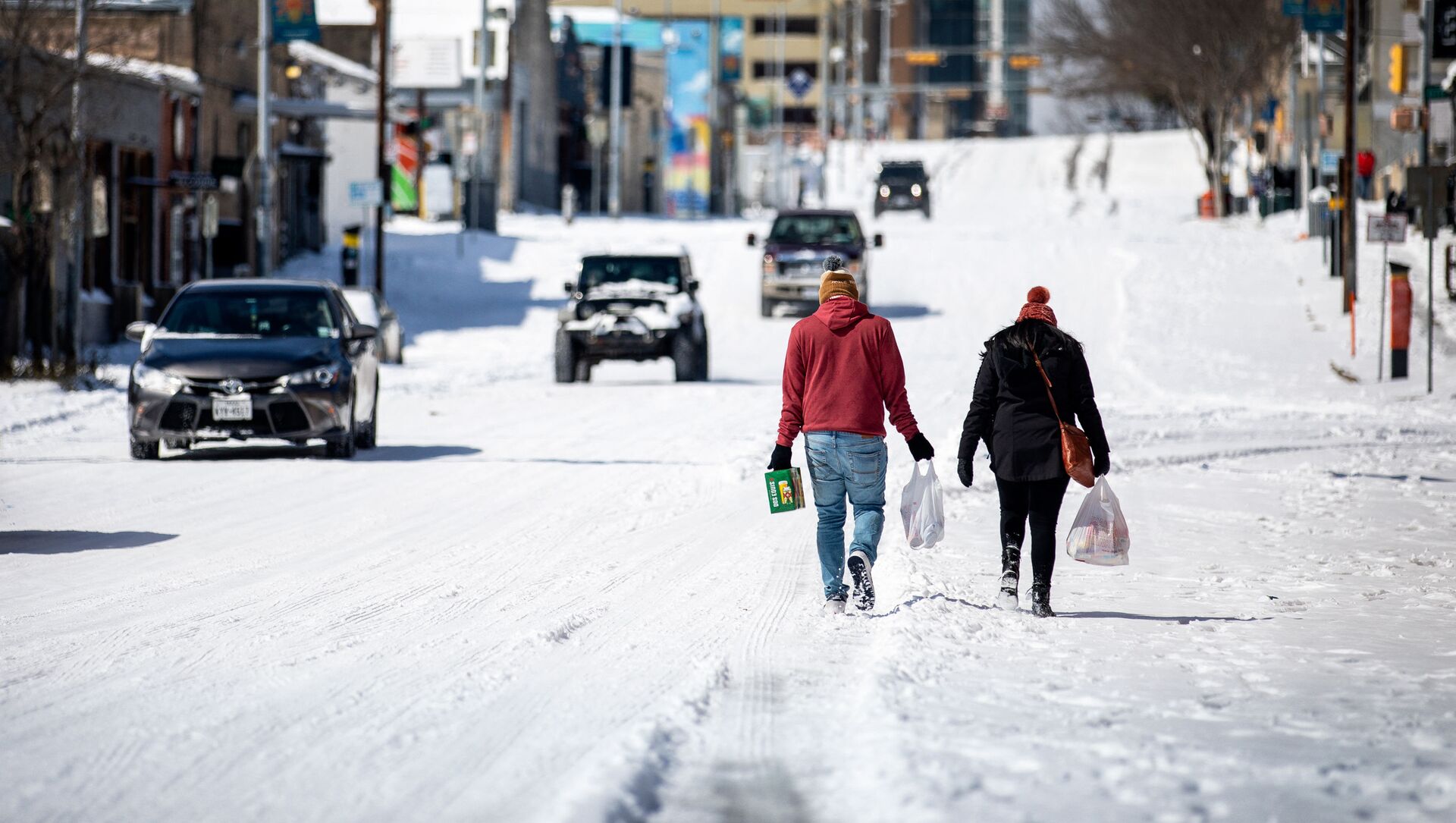 Svetlana Ekimenko
All materialsWrite to the author
An anomalous cold snap disrupted well operations across the central United States, prompting total US oil production to contract by approximately 40 percent, with crude output dropping by more than 4 million barrels a day nationwide, according to traders and industry executives cited by Bloomberg.

US crude prices soared to their highest level since January 2020, topping $61 a barrel in early trading on 17 February, after an unprecedented cold blast led to severe disruptions to well operations in Texas, the country's largest oil-producing region.

The shock of freezing temperatures sweeping across parts of the United States resulted in production outages throughout a large part of the state.

EVERY. SINGLE. COUNTY. This is a once in a generation winter weather event. Every county in Texas is under a Winter Storm Warning from the NWS. pic.twitter.com/fU3TuvKXjn

​As the anomalous cold snap continues to grip Texas, an estimate by S&P Global Platts suggested as many as 3 million barrels per day of oil output had been affected.

The severe weather conditions that caused Texas Governor Greg Abbott to issue a disaster declaration in 254 counties on 12 February, left an energy powerhouse, the Permian basin (one of the world’s largest oilfields, accounting for over a quarter of total US oil supply) operating at less than half its normal capacity.

Crude producers in Texas have been crippled by power outages, iced equipment, frozen pipelines and roads rendered impassable by the snow storm. The conditions have wreaked havoc with repairs, analysts and operators say.

While the oil industry operates reliably in frigid climates from North Dakota to Siberia, a majority of Texas producers failed to invest in weatherproofing their equipment for prolonged subfreezing temperatures, Parker Fawcett, an analyst at S&P Global Platts, was quoted by the Financial Times as saying.

On Wednesday afternoon, the National Weather Service (NWS) forecast that while the brunt of the storm had moved through Texas, anomalously low temperatures were expected to remain for days, with snow blanketing over 71 percent of the US.

As the energy grid in Texas struggled under surging demand, sweeping blackouts hit the region.

Grid operator “The Electric Reliability Council of Texas” said more than half of the state’s total power generation remained offline as of 17 February afternoon, with blackouts possibly persisting for a few more days.

​Around 2.9 mln households remain without power, and Texans have been forced to seek shelter with friends, neighbours or at the state’s “warming centers” - facilities like convention centres that still have power.

Lashing out at the grid operator Ercot as “anything but reliable”, Greg Abbott urged a probe into its handling of the power outages.

Millions of Texans are cold and in the dark during a dangerous winter storm—and I led the Texas delegation expressing our grave concerns that power outages are not distributed fairly.

Texans deserve immediate answers and accountability from @ERCOT_ISO, and their power restored. pic.twitter.com/hvCo803knB

The gas production industry in the US has also suffered disruptions on a “historic” scale, with wells and pipelines freezing, driving the main gas price benchmark in the US to jump by more than 15 percent since the start of Arctic onslaught. Supply dwindled by 17 bln cubic feet a day, forcing about 20 percent of the total gas supply offline, the outlet cites IHS Markit as saying.

Meanwhile, according to Bill Magness, chief executive of Ercot, the plunging natural gas supply contributed to the blackouts in Texas.

“Getting those resources back on the grid is the central solution to getting people their power back,” said Magness.

Gas supply has been diverted away from exports to attend to critical power and heating needs in embattled Texas, with Abbott signing an executive order temporarily demanding that distributors prioritise gas sales to Texas customers.

Accordingly, supply to the liquefied natural gas export plants in the US, predominantly situated along the Gulf Coast, dropped by nearly a half in recent days to 5.5 bln cubic feet a day, S&P Global Platts data shows.

Persisting low gas supply could trigger repercussions in global markets, claim analysts, as the US is currently the world’s third-largest LNG exporter, behind Australia and Qatar.

However, there are hopes for a reprieve as the cold spell is expected to break over the weekend.

Bitterly cold air remains entrenched across a large swath of the U.S.. Another round of snow/ice will impact the South Plains, Mid-South, Mid-Atl, & Northeast this week. Heavy snow is also in the Northwest/Great Basin/Rockies. Severe storms may develop in the Deep South on Wed. pic.twitter.com/7wdUC2wYq3

​Supply outages could continue for a few more weeks “depending on the scale of the damage”, warned Fawcett of S&P Global Platts.