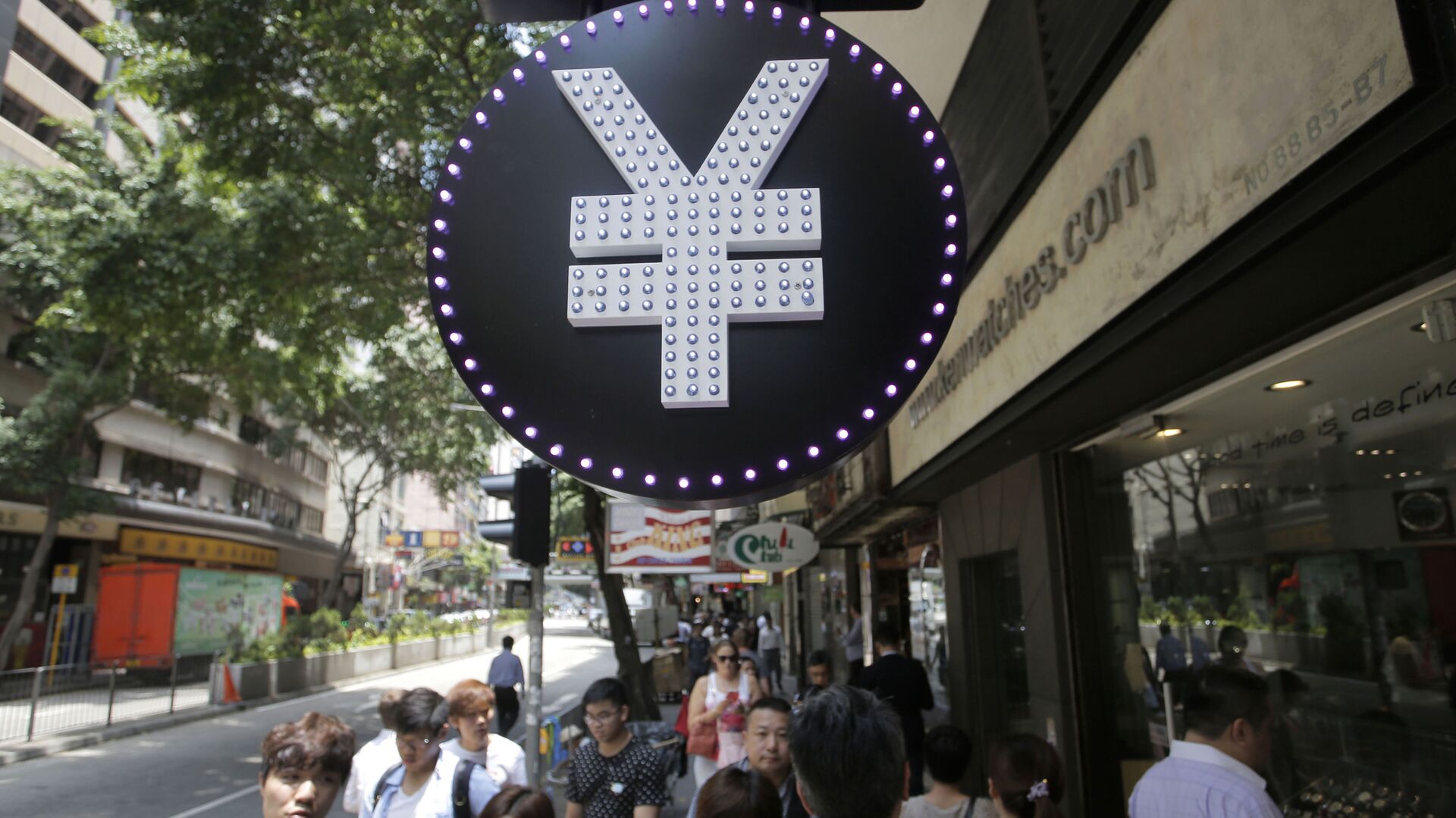 Ilya Tsukanov
All materialsWrite to the author
Major Chinese cities began trialing the new digital yuan, or e-yuan, earlier this month by giving out hundreds of thousands of "red envelope" e-cash prizes worth 200 rmb ($31) each to ring in the Chinese New Year. China is widely considered to be far ahead of most other nations in its effort to introduce a central bank-backed digital currency.

China’s ongoing trials of its e-yuan could serve as a template for setting global technical standards for digital currencies and challenge the dollar’s hegemony in global trade, but may also pose a threat to those who fear increased state control over individuals’ finances, the Financial Times reports, citing business leaders and analysts.

“Chinese policymakers are by far the most advanced in their thinking about a digital currency. They are thinking about things that the rest of the world is nowhere near thinking about yet,” an anonymous banker from a leading Wall Street Bank told the business newspaper.

“The digital renminbi will put every transaction on the radar of the People’s Bank of China,” the banker said.

Along with the creation of a domestic state-backed e-payments system, which China plans to have ready in time for the 2022 Olympic Games, Beijing is thought to have ambitious plans to use the e-yuan for international settlements, including as an alternative to the US dollar.

“A bigger goal of ours is to challenge the dominance of the US dollar in international trade settlements, the director of an unnamed Chinese state-owned bank said. “But progress towards this will only be gradual,” the banker admitted. 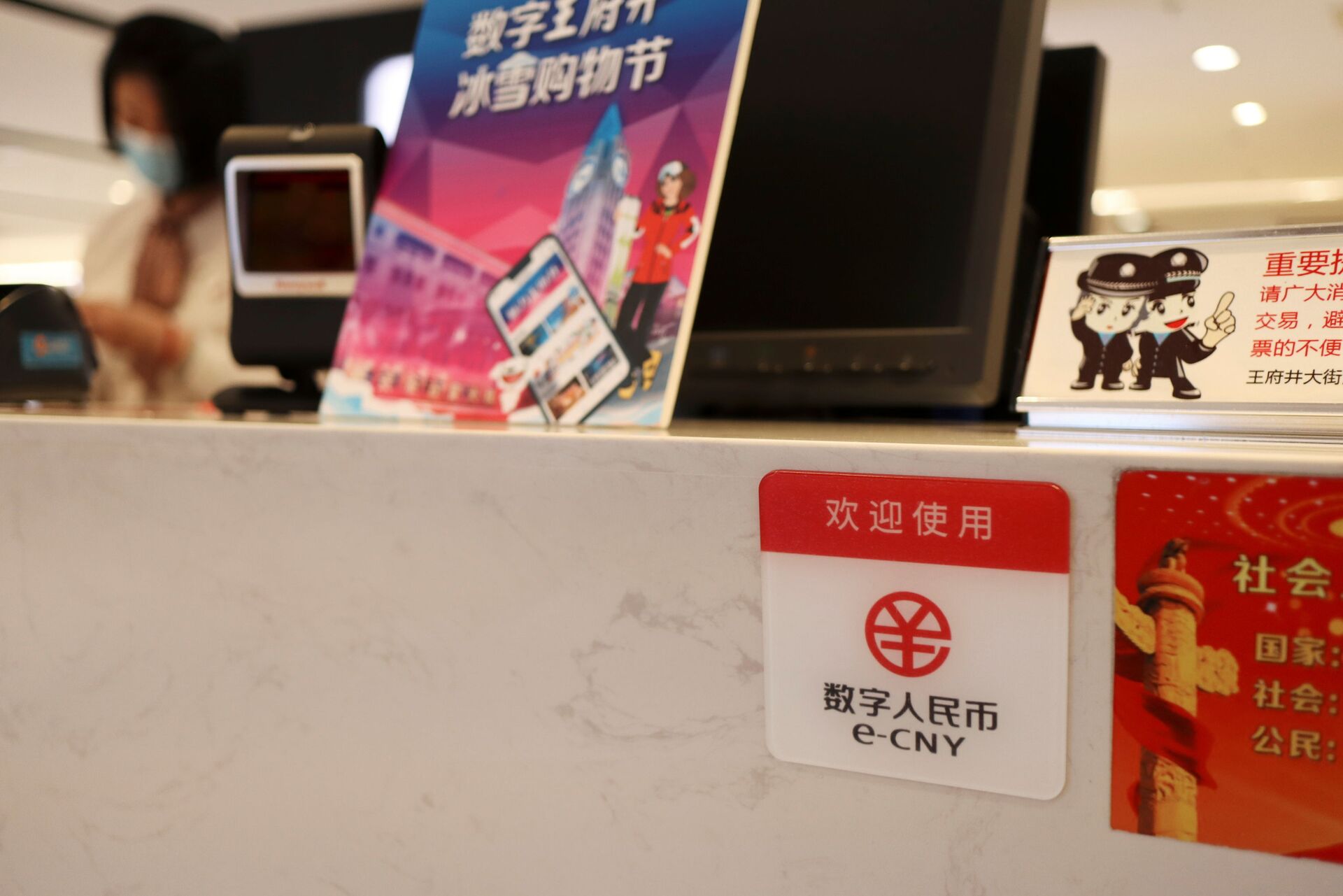 A sign of China's digital yuan, or e-CNY, is seen at a counter during a trial of the Digital Currency Electronic Payment (DCEP) at a shopping mall in Beijing, China February 10, 2021
© REUTERS / FLORENCE LO

FT makes the claim that the People’s Republic’s drive toward a central-banked backed digital currency differs from similar projects by other countries in that its aims include strengthening the Communist Party’s control over society and the economy, with the technology supposedly “partly designed to reinforce its surveillance state.”

Bitcoin Hits All-Time Record, Topping $51,259
But while the e-yuan does differ in its guiding principle from non-state backed cryptocurrencies like Bitcoin, which has continued its record-breaking streak this week, the newspaper doesn’t clarify how the Chinese e-currency is any different from the dozens of other central bank-backed e-currencies being considered or experimented with by other countries.

The principle behind Bitcoin and similar cryptocurrencies is that they are decentralised – with no central bank or single administrator controlling their exchange, allowing them to be sent from user to user via a peer-to-peer bitcoin network without any intermediary.

National cryptocurrencies, whether it’s the e-yuan, a digital dollar, a digital euro, a digital ruble, etc., are by their very nature connected to central banks, making it possible for governments to regulate them and guarantee their status as legal tender, while also theoretically allowing authorities to track all transactions by individuals who use the currency.

FT’s criticism of the e-yuan as a potential tool of state control is not without merit, but doesn’t answer questions about why the FBI, the BND or some other domestic security agency in a Western country would not gain similarly extensive surveillance capabilities with the creation of a central bank-backed e-currency.

Emily Jin, a research assistant at the Centre for a New American Security, a Washington-based think tank, told the newspaper that “if the [Chinese] central bank can successfully roll out the digital renminbi, it indeed would be a crucial tool for domestic control.” While “people could still try to circumvent the monitoring capability…that would be incredibly difficult given that the system would allow the central bank to track real-time transactions,” she said.

Samantha Hoffman, a senior analyst at the Australian Strategic Policy Institute, echoed these concerns, saying that through the use of the e-yuan, “the party-state would have visibility over all financial transactions,” making it so that “there will be no such thing as true anonymity for users.”

Jin and Hoffman’s criticisms are not only relevant to China, however, with government and business leaders at last year’s World Economic Forum "Great Reset"-themed meeting proposing, among other things, a dramatic strengthening of e-payment systems to reduce the use of physical paper cash.

Bill Gates and His 'War on Cash' Suffer Partial Defeat at the European Court, Economist Explains
Chinese authorities seem to be perfectly aware of potential privacy concerns among the public. In 2019, Mu Changchun, the chief of the People’s Bank of China’s digital currency research institute, promised that users of the e-yuan a level of anonymity in their transactions.

“We know the demand from the general public to keep anonymity by using paper money and coins…We will give those people who demand it anonymity in their transitions,” Mu said, speaking at a conference in Singapore.

“But at the same time we will keep the balance between the ‘controllable anonymity’ and anti-money laundering, counter terrorist financing, and also tax issues, online gambling and any electronic criminal activities,” he said. “That is a balance we have to keep, and that is our goal. We are not seeking full control of the information of the general public,” Mu stressed.