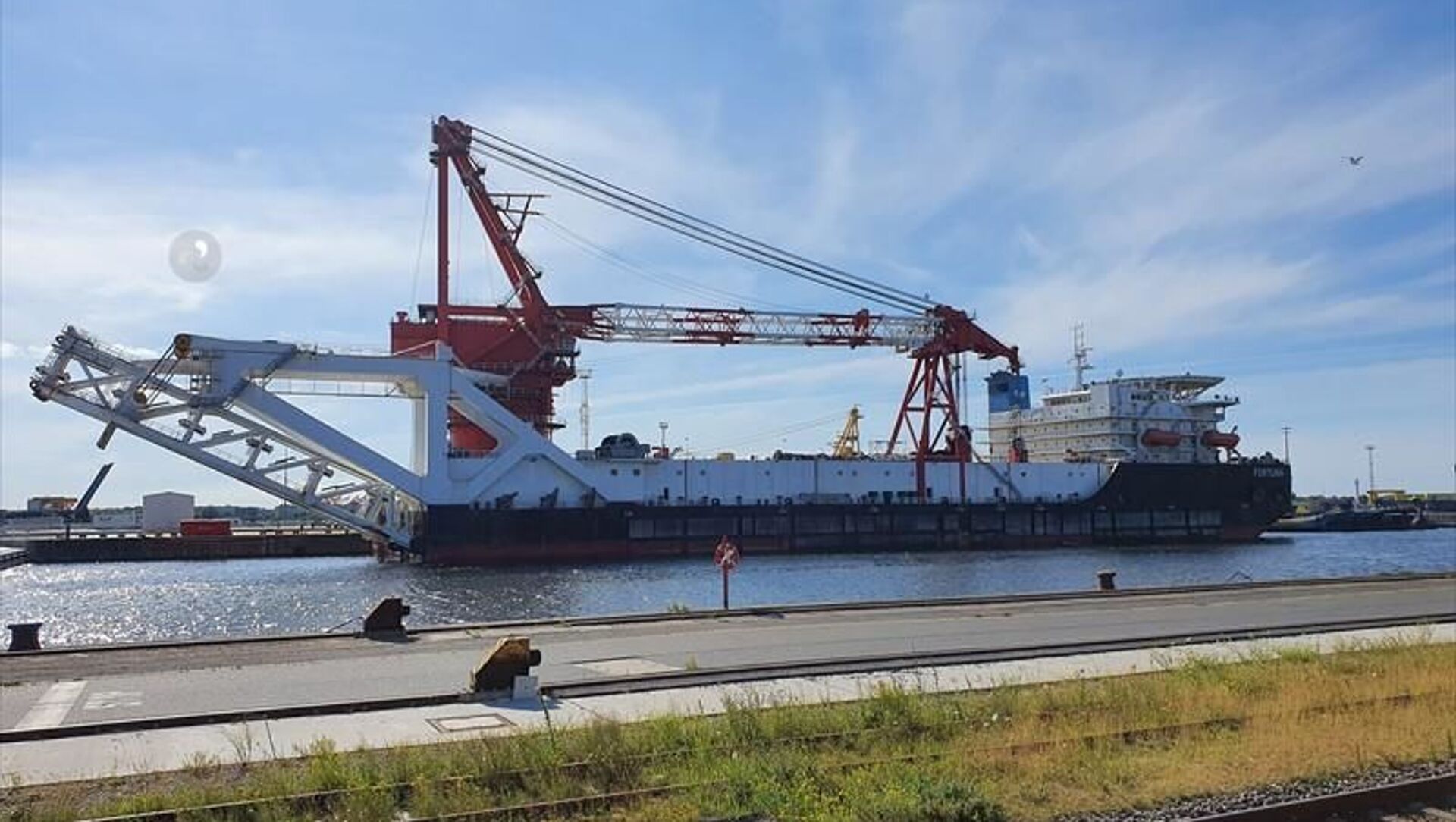 © Photo : MarineTraffic / Peter Remde
Subscribe
International
India
Africa
Ilya Tsukanov
All materialsWrite to the author
Washington has slapped two rounds of sanctions on the $10.5 billion Russian-European energy infrastructure project, and has threatened its Western European allies with secondary restrictions. Berlin has rejected the idea of extraterritorial sanctions, but has also reportedly agreed to negotiate with the Biden administration on possible concessions.

Germany and the United States have not yet start direct negotiations on Nord Stream 2, Handelsblatt reports, citing officials and sources in government circles.

The newspaper says the key reason that negotiations have yet to start is that key positions in Washington have yet to be filled, among them counterparts to the staff of Federal Minister of Economic Affairs and Energy Peter Altmaier.

“The Federal Government has always advocated taking the concerns of our partners seriously,” Thomas Bareiss, parliamentary state secretary at the Ministry for Economic Affairs and Energy, told the newspaper. “From long-running discussions with our transatlantic friends, I know that the US mainly argue from an overall context,” the official said.

Handelsblatt also reports that internal discussions have begun on the American side, with the departments of State, Treasury and Energy said to be engaged in conversations under the leadership of the National Security Council to determine how to proceed.

Formally, Washington’s go-to position remains sanctions. Amid reports of a Russian pipelaying ship’s resumption of operations, a State Department spokesman told Handelsblatt that Washington was “monitoring” events, and that it would determine “the applicability of sanctions” amid any efforts to finish or certify the project.

Calling sanctions “just one of many important instruments,” the spokesperson said that the US was “working closely with our allies and partners to strengthen European security and protect it from predatory behaviour.”

Last week, Spiegel reported that former SPD chairman Sigmar Gabriel, other officials and experts on transatlantic relations would be involved in talks with the US on Nord Stream 2, with Berlin and Washington to discuss a “strategic package” of measures to satisfy Washington’s concerns, including the construction of LNG terminals in Germany, plus a ‘shut off mechanism’ which would automatically cut off gas flowing through Nord Stream 2 in the event of Russian ‘violations of international law or human rights’.

US Reportedly Signals Readiness to Lift Sanctions Against Nord Stream 2 if Certain Conditions Met
On Sunday, Russian Deputy Prime Minister Alexander Novak announced that Nord Stream 2 was over 95 percent finished, and said the Russian side was “confident that, despite the destructive approaches that we observe from the US side, which…are delaying the implementation of this project, it will be completed.” Novak characterised US efforts to stop Nord Stream 2 as “non-market methods of competition.”

On Monday, Bundestag Economic Affairs and Energy Committee chief Klaus Ernst told Sputnik that he is opposed to the creation of a "shut off mechanism" for Nord Stream 2, saying the idea is unacceptable to Germany and the European Union.

"I very much welcome the fact that under President Biden, the United States is now more willing to talk. But stopping Nord Stream 2 is not negotiable, and neither is a 'shut off mechanism', which would tie gas deliveries to the EU with the supply of gas to Ukraine," the Linke lawmaker said.

On Monday, maritime tracking resource MarineTraffic showed that the Russian-flagged Fortuna pipelayer resumed work in Danish waters after a week-long pause due to stormy weather in the Baltic Sea. The Fortuna laid 2.6 km of pipeline in German waters in December, with about 148 km of the pipeline – 120 in Danish waters, and the rest in German waters, remaining to be built.

Nord Stream 2 is expected to be finished by late 2021 at the very latest. When complete, the infrastructure will be able to pump up to an additional 55 billion cubic meters of gas per year to Europe along the bottom of the Baltic Sea, thus doubling the capacity of the existing Nord Stream network that was completed in 2012.

Russia
No Way Nord Stream 2 Won’t be Used as Russia’s Partners in EU Need Project, Official Says
The US introduced two rounds of sanctions against the Russian-Western European energy project. The first, announced in December 2019, prompted a major Swiss contractor to pull out of the project, freezing construction and prompting Gazprom to decide to complete it using Russian ships. The second stepped into force on 1 January 2021, and has prompted some insurers and certification companies to pull out, but has had no impact on construction.

Late last month, former German Chancellor and Nord Stream AG chairman Gerhard Schroeder told Rheinischen Post that in addition to being more expensive, the LNG offered by the US in place of Nord Stream 2 is “not environmentally friendly”, since it is derived from fracking.