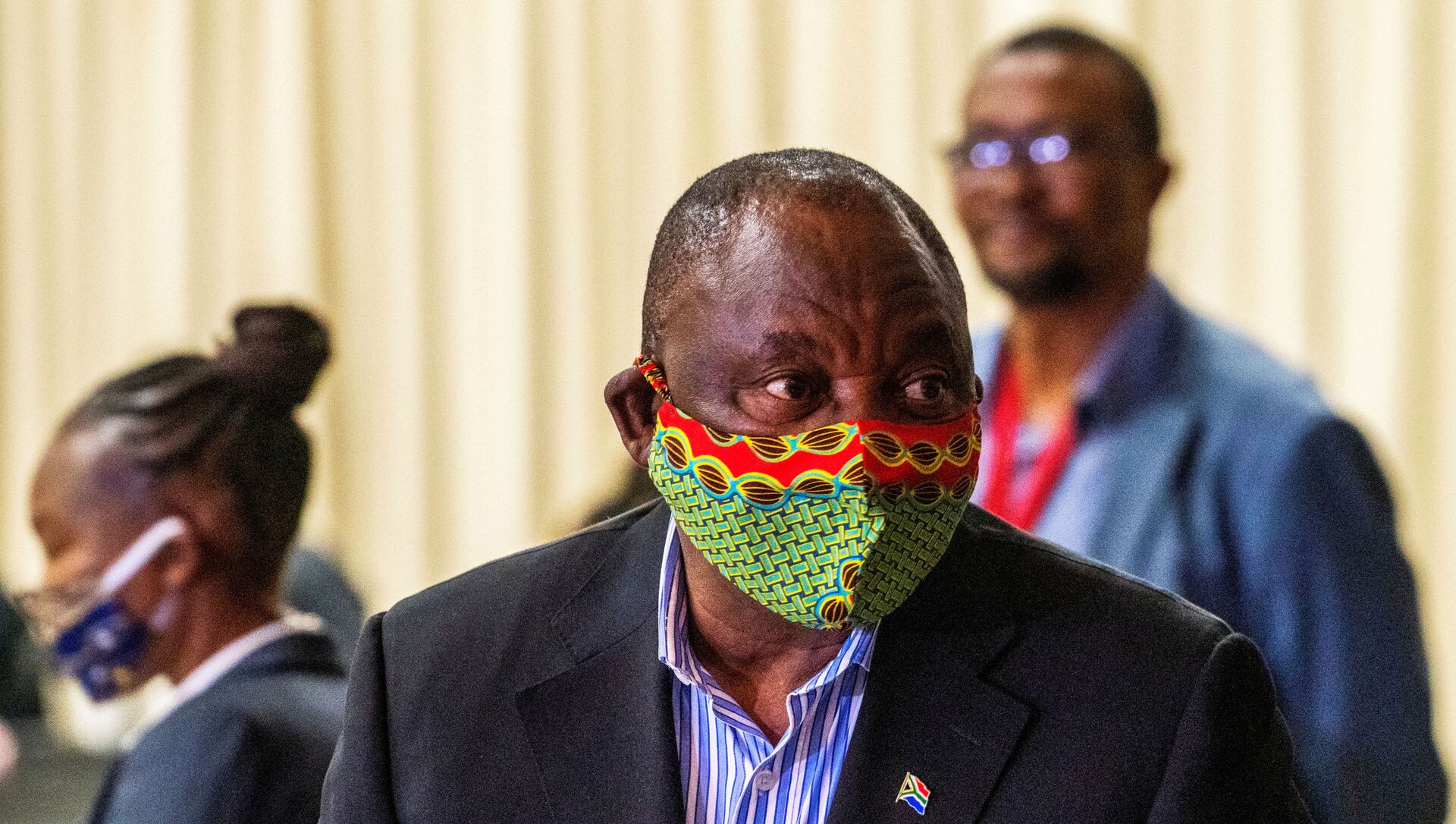 James Tweedie
All materialsWrite to the author
South African President Cyril Ramaphosa reportedly received millions in donations from Aspen Pharmacare — licensed producers of the US firm Johnson and Johnson's coronavirus vaccine — for his ANC political party in 2017. Now Pretoria has ditched the bought-and-paid-for British Oxford jab for a rival American vaccine.

South African President Cyril Ramaphosa is accused of sabotaging bids to roll out British and Russian COVID-19 vaccines in favour of a firm that reportedly donated to his political campaign.

The Sunday Independent quoted an unnamed official who alleged that the government's U-turn to not deploy 1 million doses of the low-cost AstraZeneca 'Oxford' jab was made to benefit donor Aspen Pharmacare.

"Someone opened the doors for Aspen; they are getting everything on a silver platter with help from the top," the anonymous source claims.

Aspen has been licensed by US firm Johnson & Johnson to produce its coronavirus vaccine in South Africa. The president announced in his State of the Nation address this week that 80,000 doses are set to arrive next week from a "reserve" batch currently in Europe, with 500,000 more to follow over the next four months.

Aspen senior executive Stavros Nicolaou, who personally donated R150,000 to Ramaphosa's 2017 campaign to run the ruling African National Congress (ANC), in addition to the millions from the firm, denied a quid-pro-quo arrangement.

"Aspen is one of seven contract manufacturers that J & J have commissioned around the world to manufacture their candidate COVID vaccine," Nicolau said. "Aspen's intended role is purely that of a contract manufacturer and it does not tender, distribute, contract, sell or commercialise the vaccine to either the private or public sectors in SA or elsewhere. Aspen is neither an agent nor distributor of J & J."

But the J & J jab has not yet been approved for use outside clinical trials by South African Health Products Regulatory Authority (SAHPRA) — or any other such body worldwide — leaving its roll-out in limbo.

Other sources told the outlet that Ramaphosa was deliberately undermining Health Minister Zweli Mkhize, a potential ANC leadership challenger, in politicizing a health emergency by taking vaccine decisions out of his hands.

One source claimed that Mkhize favoured the Sputnik V vaccine made by Russia's Gamaleya Institute, but had been overruled by the president.

“Ramaphosa has no respect for Zweli, he treats him like a small child," one said. "When the pandemic broke out, the Chinese government approached the minister with a donation of over a million Personal Protective Equipment (PPE), but the president stopped that donation because it was going to make Mkhize shine."

The official said the "final nail that Ramaphosa hammered into Mkhize’s coffin" was his choice of Deputy President David Mabuza to lead the government's COVID-19 task force, over the health minister.

"And now, they are doing it with the purchase of vaccines, ordering what they want and not what the health minister prefers and think is good for South Africans,” the source added.

Another source close to Ramaphosa confirmed the rivalry.

“We all know Zweli has ambitions to be the next president, and he is using every opportunity he gets to campaign instead of looking for vaccines to save lives. Hence, the president stopped him in his tracks. He wasn’t snubbed, but redirected to do his job as a government minister.”

Meanwhile, a 'vaccine war' has reportedly started between South Africa and fellow BRICS trade bloc member India over the 1 million doses of the Oxford vaccine delivered early this month after it emerged they were dated to expire in April.

Sources told the City Press that deputy the director-general of health, Anban Pillay, has refused to pay the Serum Institute of India (SII), which produces the British-developed vaccine under license, for the remaining 500,000 doses ordered.

But vaccine deployment had already been halted by the early release of results from a study — yet to be peer-reviewed — that claimed it was only 22 percent effective against the more-transmissible 501Y.V2 strain of the virus (first detected in South Africa) currently causing concern around the world.

Professor Shabir Madhi — who announced the study results last Sunday — and Professor Francois Venter of the University of Witwatersrand, said the doses should still be given to those at high risk of the disease.

"We need to get as many people vaccinated as possible, as fast as possible," Venter stressed. "We need to start with the most vulnerable urgently and use the AstraZeneca vaccine immediately on them."

South Africa's rejection of the Oxford vaccine — the backbone of Britain's inoculation of a quarter of its population in two months — could also jeopardise the World Health Organisation's Covax scheme to provide vaccines to developing nations, which South Africa is relying on.

One-third of the three billion vaccines doses ordered by Covax — and 4.2 million of those it has pledged to deliver to South Africa — are from AstraZeneca.

Confusion continues to swirl around the government's commitment to securing supplies of the well-proven Sputnik V vaccine.

Department of Health spokesperson Lwazi Manzi claimed the government had contacted Russian ambassador Ilya Rogachev early on about supplying the jab, already in use in 15 countries.

"We started discussions the moment they announced their intention to develop and trial a candidate," Manzi said.

Earlier this week, the Russian Direct Investment Fund (RDIF), the agency handling sales of the Sputnik V, confirmed that it was in talks with two South African companies for contracts to privately supply the jab.

The same report quoted Mkhize as saying a clinical trial had been begun to test the vaccine's effectiveness against the 501Y.V2 variant, although SAHPRA is yet to approve it for general use.

Manzi also said that Gamaleya needed to do "further work" to allay fears about the risks of its human adenovirus-based vaccine in men with HIV.

One in five South Africans are infected with HIV, but one official source asked why the rest of the population could not be immunised with it.

"It is true that 7.7-million people are living with HIV," the official said. "HIV prevalence among the general population is 20.4 percent, but what about the remaining 79.6% of South Africans, why can't they be safely vaccinated with Sputnik?"

Another official added that the South African government's claim that it was in talks with Rogachev was false.

World
China Slams US Finger-Pointing After White House Doubts Beijing's Transparency on COVID Origin
Ramaphosa is facing a probe into a reported 1 billion rand (£50 million, $69 million) in donations for his 2017 campaign — which placed him as de-facto presidential candidate in the 2019 general election. The huge pot of donations from sources outside the party was unprecedented in the organisation, where US primary-style campaigning is unknown.

The former lawyer and National Union of Mineworkers general-secretary is now numbered among South Africa's 20 richest civilians after a series of executive appointments, including to the board of minerals firm Lonmin, now owned by Swiss mining giant Glencore.