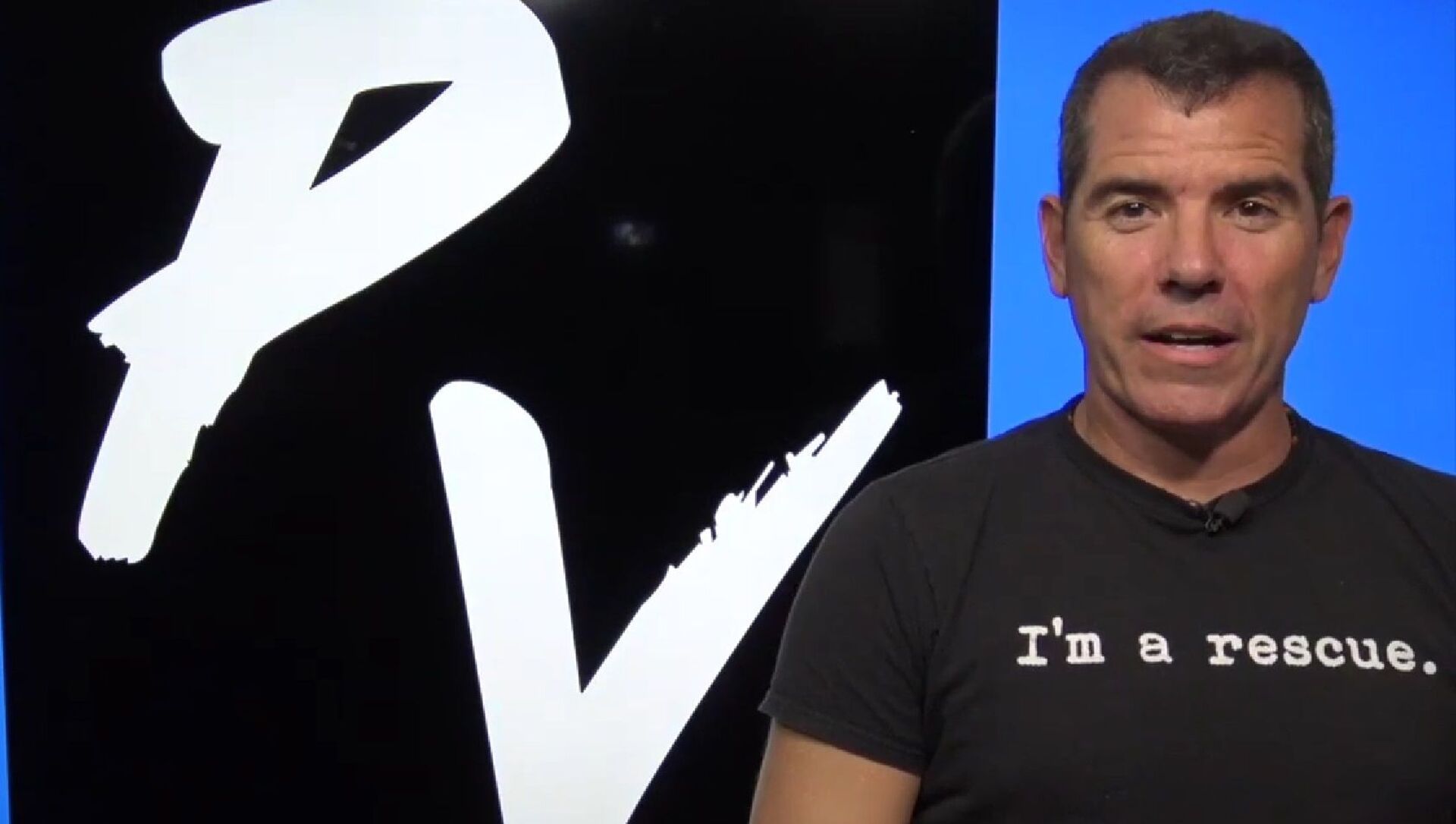 Mohamed Elmaazi
All materialsWrite to the author
At least 10 US-based independent, left, and progressive YouTube channels were recently undermined by the social media giant, when their videos were demonetised for alleged breaches of its terms and conditions.

Graham Elwood is a stand-up comedian, satirist, and news and political commentator. He founded the popular YouTube show and podcast The Political Vigilante, during which he discusses news and current events. Elwood also co-hosts the show Government Secrets with fellow comedian Lee Camp.

The Los Angeles-based Elwood spoke to Sputnik and explained how an inexplicable decision by YouTube to remove his ability to make money via his social media channel resulted in around 60 percent of his income disappearing overnight.

Sputnik:  Explain the decision that YouTube has made in relation to disallowing adverts on your channel.

And then the main revenue stream that I had from YouTube was when I would go live - there's these things called "Super Chats" where people can pay money and their question will stay up [more prominently] in the chat (because I'll have hundreds of people in my live chat), and the Super Chat is a way to support the show, it's like a donation. I [then] read all of the Super Chat questions, probably 75 percent of my total YouTube income comes from the Super Chats. That's all been knocked out.

@GrahamElwood explains the immediate and very real consequences he has faced as a result of being demonetized by YouTube. pic.twitter.com/13YkfvshyW

​Not to mention my total back catalogue of videos, which is over 2,200 videos. I've been doing my show, The Political Vigilante, for four years. None of them can have any ads on them. All of those videos are still available for people to view, so YouTube is still profiting from my videos and their content and their algorithm, but I'm not. So, this happened, I was notified February 1st.

Sputnik: Can you describe the events leading up to this decision?

Graham Elwood: I mean, all of us, especially lefty, indy media people, can tell you how YouTube has been messing with all of our algorithms. About two, three years ago, I started to notice anytime I did a video that was any sort of anti-war, talking about the war in Yemen, even just having the word Yemen or Syria or Iraq or Iran in my title - they would, at the very least, limit the amount of ads in it, or just pull the ads, demonetise that specific video. This has been happening for about several years now.

WikiLeaks Shop's Facebook Page Unpublished For Alleged 'Community Standards' Violations
So, that was all kind of leading up to this. And then I do a podcast with Lee Camp, who's on Redacted Tonight on RT, and obviously the [US] State Department has highly throttled and censored RT, and we've been doing this podcast since July of 2020, and we started doing a three-part series on the JFK assassination. We go into government secrets, things that people didn't know that our government has done.

And we went into [the book JFK and the Unspeakable] - that is all sourced and verified, about forensic evidence about the JFK assassination. It's not just like crackpot theories. It's like Freedom of Information Act documents. And we talked a lot about, from the references of that book, of doctored forensic evidence, which basically proves that the bullet entered JFK's head from the front, which makes what [the sole arrested assassin] Lee Harvey Oswald's position [at the time of the assassination] impossible to do, right?

And then under his [video] YouTube put this basically warning label saying, I forget how they phrased it, "this video contains non-factual information. Wikipedia States Lee Harvey Oswald killed JFK". So literally, the most disputed and controversial assassination of the last hundred years… YouTube knows [the truth about] what happened.

And again, Lee is referring, [to] all the documentaries, all the books, the Oliver Stone movie, I mean, interviews, Freedom of Information Act documents. So, all that stuff is wrong, but the almighty YouTube owned by Google, [CEO] Eric Schmidt, we know has been working hand in glove with the CIA since 2011, they're now saying [that they know what the truth is]. So, this happened the week or so prior to me getting demonetised. Then I logged in on February 1st and I was demonetised.

Sputnik: Was an explanation given, did they say this is the decision that has been made and why?

Graham Elwood: Harmful content. I can even send you the screengrab if you want. And when you click into what they're [calling] harmful content, it's very vague. Now, they put out their new terms of service about a month ago. And I was talking to my producer and we were going through that like, "Oh man, this is bad. They could use this for anything". And you know, they've been censoring the left pretty hard, anything that doesn't fit into the [establishment narrative] - and they've done it to the right as well, this sort of censorship has been happening for a long time - but now they're going after the left. 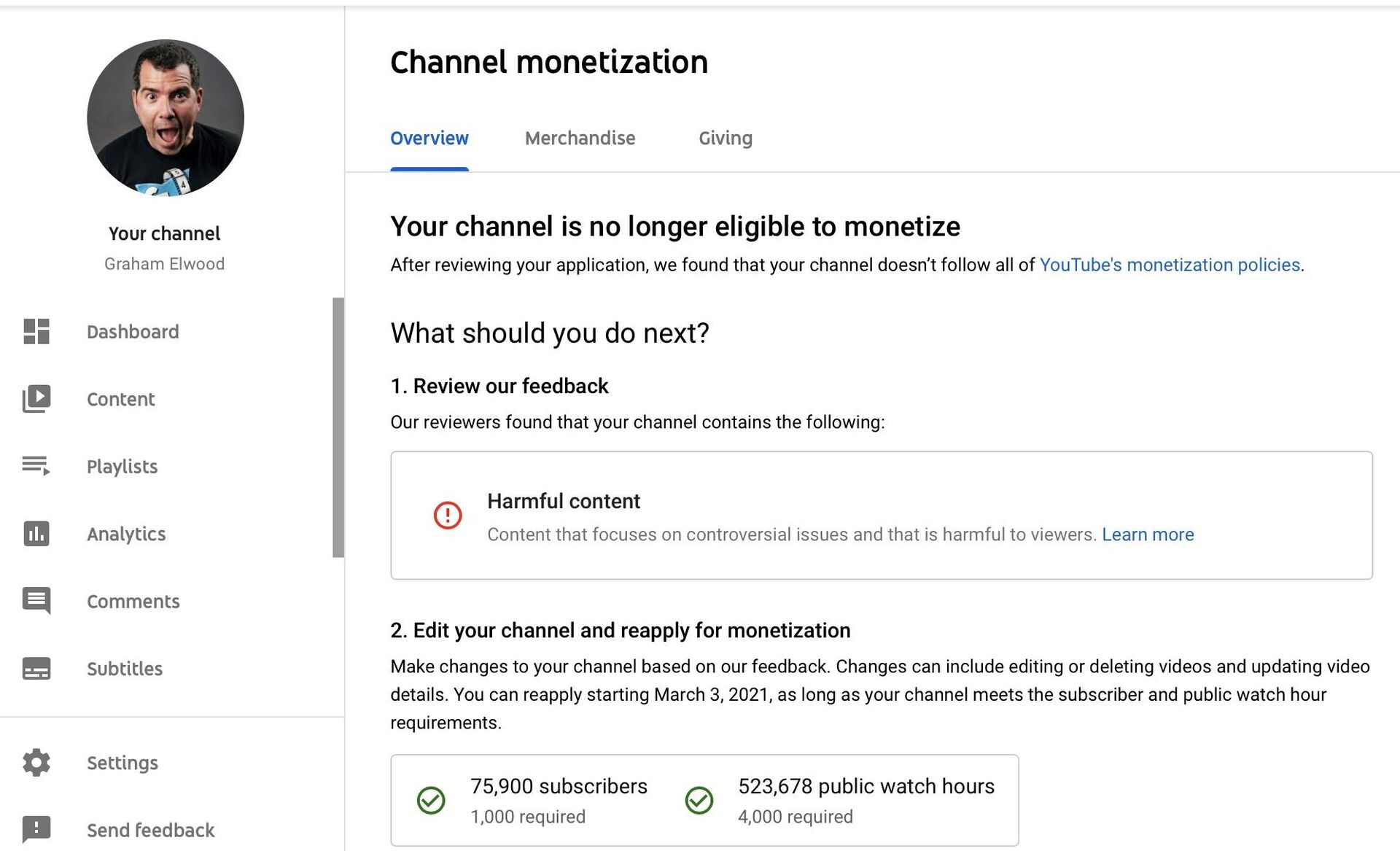 But they never said, "this video, at this timestamp, you said these things that violate our terms of service, our guidelines". Never, nothing like that. And there's a button to appeal, but literally the button is not operable until March 3rd. So, a month of no revenue. Now, this show is my job. This is my full-time job. And this is about 60 percent of my revenue got taken out.

Sputnik: How has this impacted you?

Graham Elwood: So there's that, 60 percent of my revenue gone, overnight. I knew this was going to happen. In the spring of 2019, this company Rokfin approached me and [comedian] Ron Placone and a couple of other people and said, "we have this new platform, it's a competitor to YouTube". It's much smaller obviously, but they're blockchain, open sourced, and they pay the content creators in cryptocurrency. They basically mine their own tokens called the RAE Token. And I was like, "okay".

Still demonitzed so telling people to go to https://t.co/kar9ewJfnI where all my vids live ad and censorship free! https://t.co/8AqRLT0hhb

​I just slowly started growing and then last spring, when the [COVID-19] shutdown happened, I started doing more simulcasting where I would go live on YouTube and Rokfin at the same time. What I've been doing the last week and a half is just been telling my audience to go over to Rokfin. I still livestream on YouTube, but I'm debating on whether I'm going to put any clips on YouTube anymore.

Maybe I'll just do one clip a day and then put the rest of them on Rokfin and just make Rokfin where all these videos live exclusively, because it's free to sign up, and Rokfin also has a premium tier. They have a tip feature and it's the future, you know, I'm hoping. It's pretty nerve-racking this week and a half, but my audience is very loyal, and there are many people going over to Rokfin and supporting me in other ways. I have a PayPal button, [Patreon], and a Venmo. So that's been good. And then really the independent media community has very much rallied around me.

Sputnik: Who else, that you're aware of, has been affected by similar actions taken by the likes of YouTube?

Graham Elwood: The Convo Couch, NiKo House, Jamarii Thomas, but he got reinstated I believe. So about 10 or 12 shows between February 1st and February 4th, all got demonetised. It was like a bloodletting. It seemed very deliberate. It seemed very like "we're going after these left-leaning shows" because most of us have been critical of the Biden administration and the Democrats.

You know, it's like when I'm critical of Trump it doesn't seem to bother the algorithm, but when I'm critical of Biden, it somehow does. But I just found out last night, some of them have gotten their monetisation back. Convo Couch and NiKo House still have not. That's what I've heard.

Finally @TeamYouTube has reinstated @theProgSoapbox and @FordFischer after demonetizing their channels for no reason whatsoever. Now they must do the same for @grahamelwood - a YouTube creator who clearly stands for peace, truth, & equality. Harming his career is simply wrong! https://t.co/quSXRisVyr

​Sputnik: You and fellow comedian and satirist Jimmy Dore recently discussed engaging in self-censorship so as to avoid being targeted for demonetisation. Could you expand upon that?

Graham Elwood: I mean, there's certain times where you change the title a little bit...but I kind of just got pissed off and just said, "no, I don't care". That's why I leaned so heavily into Rokfin the last 18 months. It's because they're going to come for me no matter what. So, I'm going to go down saying what I want to say, and then hopefully Rokfin will keep growing. Because some big people are going to be joining, Jimmy's on Rokfin, Lee Camp's on Rokfin.

The interview I did with Jordan Chariton on Status Coup the week I was demonetised, when he dropped that clip, he texted me, Jordan Chariton texted me and said, "Graham, my interview with you has been up on YouTube for 35 minutes and it's showing zero views", which is not possible. So, I mean, my goal is to get everybody off over to Rokfin and turn YouTube into MySpace.