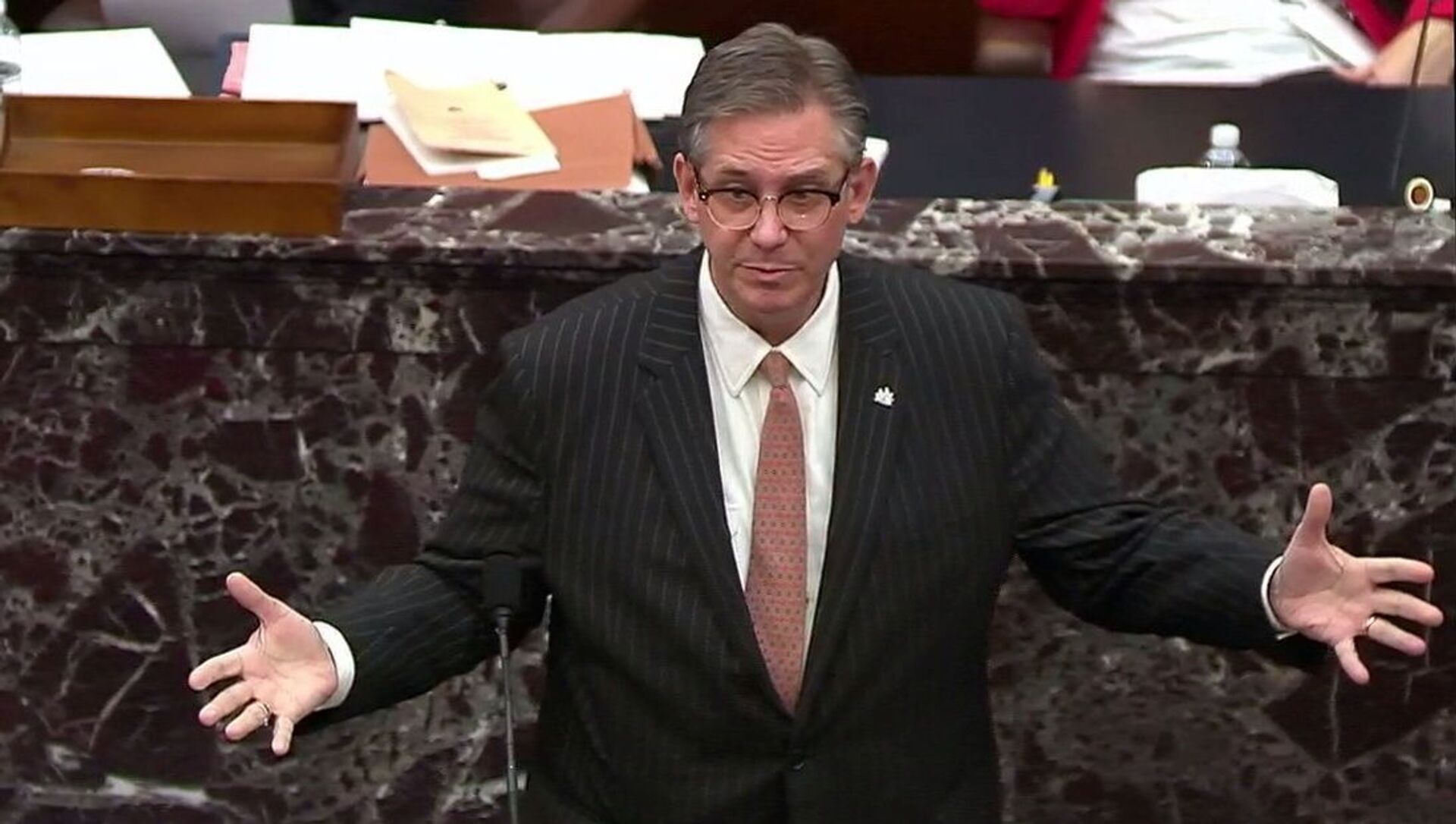 Daria Bedenko
All materialsWrite to the author
Donald Trump's legal defense team saw some swaps at the last moment, as, according to reports, five lawyers left the team shortly before the impeachment trial in the Senate was due to commence. In early February, Trump announced he had hired two new lawyers: Bruce Castor and David Schoen.

As the second impeachment trial for the former US president, Donald Trump, began on Tuesday, one of his defense lawyers, Bruce Castor, appeared to have stolen the show on Twitter, with his remarks propelling his name into Twitter trends.

Netizens noted how Castor in his arguments "dared" the Department of Justice to arrest Trump, referring to Greece and Rome falling as democracies, due to partisanship while appearing to admit that Trump lost the election - even though his client is still adamant that there was "election fraud".

“People get tired of an administration they don’t want. And they know how to change it", Castor argued during his speech, prompting some to doubt whether he was actually defending the former president or attacking him.

Did Bruce Castor just say Trump indeed lost the election? "The American people just spoke and they just changed administration….So their system works.....People know how to change [an administration]. And they just did."#ImpeachmentTrial #Oops pic.twitter.com/SJWYOO1T43

Trump’s “lawyer” just spent 20 minutes arguing that Trump should not be held accountable because the American people are smart enough not to vote for Trump again in 2024. Castor really is not good at this lawyering thing.

Bruce Castor saying that Greece and Rome fell as representative democracies because of partisanship. So....say no to #ImpeachmentTrial.

(My guess: Castor dropped his index cards on the way in and picked them up and placed them in random order.) pic.twitter.com/cjuf3I1Z8N

​Trump's lawyer appeared to praise his rival's level of preparation, admitting that the defense team legal strategy had to be changed due to that.

Trump lawyer Bruce Castor says the House Managers' presentation was so good that his team huddled and changed course.

What will Castor’s family tell him when he steps off the Senate floor and he asks them how he did?

​Many netizens mocked Castor's arguments for being messy and tangled.

​Some even came up with a Super Bowl meme with The Weeknd to illustrate the speech. Others recalled a Tuesday viral story with a lawyer (luckily from a different case) accidentally covering his face with a cat filter on Zoom and joked that a cat would do better than Castor.

Trump went with Bruce Castor instead of this cat. Big mistake. https://t.co/oqV1L86dQ0

​People suggested that the impeachment trial might end up with a conviction. But perhaps not for Trump.

Guys, I think Castor is going to be convicted.

​The trial, to decide whether Trump will be impeached in the US Senate for "incitement of insurrection" during the deadly 6 January Capitol riot, is expected to last over a week.

Despite some netizens joking and calling for Trump's conviction, it will take at least 17 Senate Republicans to vote for it - something that many observers suggest is unlikely to happen.