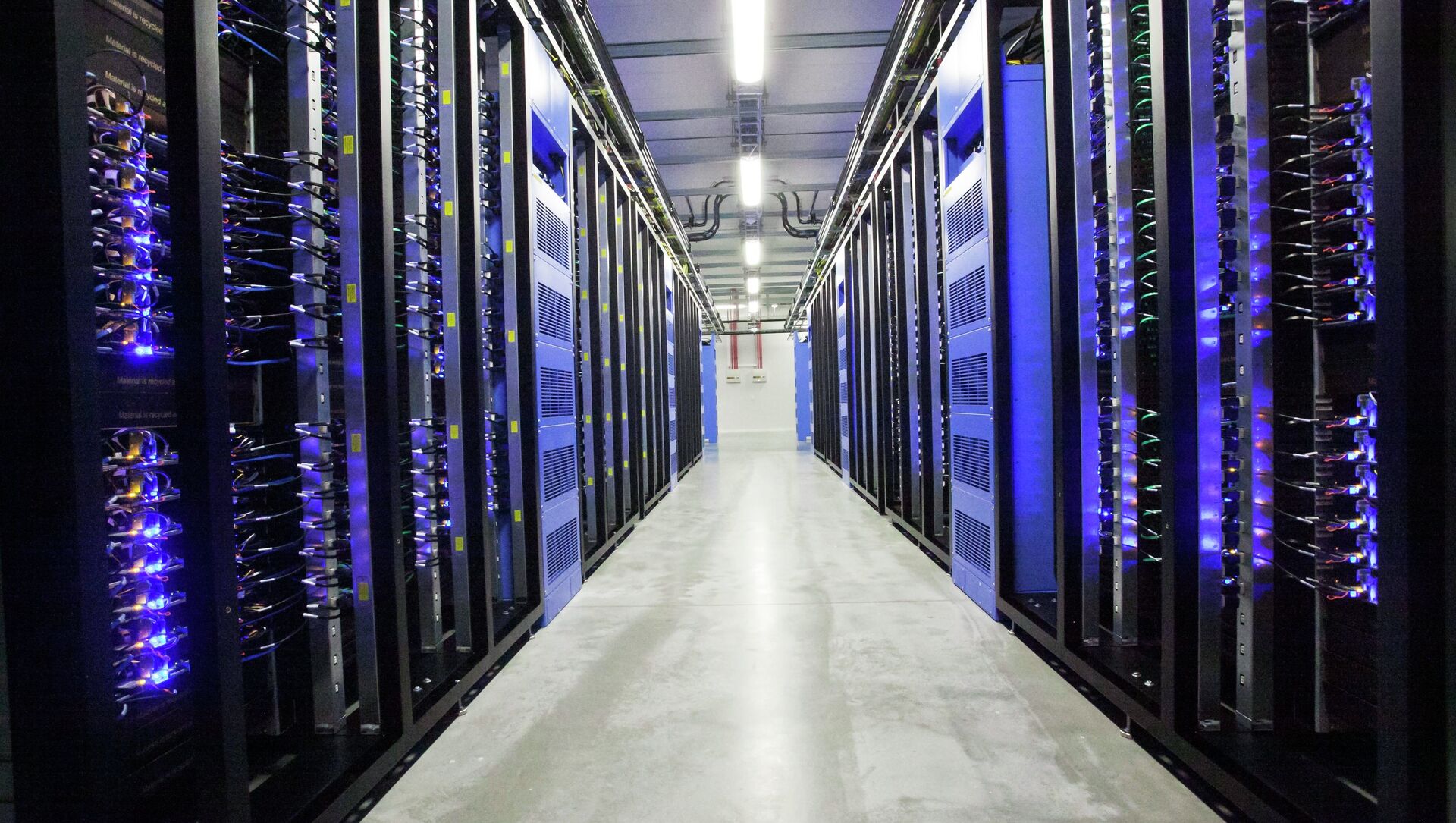 Demond Cureton
All materialsWrite to the author
Concerns over the transfer of data across borders in the information age have echoed in the business industry, namely after a senior exec voiced his concerns at the Reuters Next event in January this year. The effects of such blockages could threaten the development of key emerging technologies in the age of the Fourth Industrial Revolution.

Sputnik spoke to Abishur Prakash, co-founder of the Center for Innovating the Future (CIF) in Toronto, about the challenges blocking data flows and key technologies such as artificial intelligence (AI), 5G, connected cities and others globally, and the major geopolitical shifts threatening the interoperability of such innovations.

Mr Prakash is a geopolitical futurist at the CIF, a leading tech strategy consultancy based in Toronto. He has authored numerous books, including Next Geopolitics: Volume One and Two, Geopolitics of Artificial Intelligence (Go.AI) and The Age of Killer Robots, and is featured across the world's top media outlets.

SPUTNIK: Siemens chief executive Joe Kaeser recently identified concerns over data flows across borders as a major challenge to building sustainable Internet of Things (IoT) systems globally. What can you tell us about the scope of his concerns as seen in global industry?

Abishur Prakash: It is clear that geopolitics of technology, or what I call Next Geopolitics, is now disrupting many types of businesses. For Siemens, the decisions governments make around data and others are threatening how its products and services operate.

For example, many connected factories employ Siemens technologies and produce huge amounts of data. In the past, this data could be stored on Siemens servers and analyzed, as well as located in Europe or the US.

Now, this may no longer be possible as governments start to control the movement of data.

'New World Trade Order' Urgently Needed Amid Rise of New Technologies, China's Tech Market, CEO Says
The challenges Siemens faces echoes what the Center for Innovating the Future (CIF) published earlier this year regarding the top geopolitics of tech risks for 2021. A common theme among the risks is that the world is becoming divided by technology, which is a big challenge for businesses. In the past, geopolitics was 'easier' to navigate because events were taking place one at a time, and there was a tried and tested playbook.

Now, in Next Geopolitics, many nations are making unprecedented decisions at the same time, putting business models under siege, and localization may not solve anything. General Electric (GE) pioneered localization more than a decade ago but this does not mean GE is immune to the challenges Next Geopolitics is bringing.

SPUTNIK: Sanjeet Pandit, Qualcomm's global head of smart cities, identified three key hurdles to building them. Are smart cities still a possibility in today's era of next geopolitics, and how would such municipalities be properly funded on a scale efficient enough to carry out and oversee projects to their completion? Would these cities remain interoperable with others, who would hold the data and how would it be used?

Abishur Prakash: At one end, smart cities are being used by nations as a way to build their power in Next Geopolitics. For example, look at South Korea, who is exporting entire smart cities to nations, or Saudi Arabia, who is building NEOM, a giant smart city, to move beyond oil.

Can China export smart cities to Europe if European nations have banned Chinese technology? Or, can US companies pitch their technologies to cities in Asia that want to become 'smart' if Chinese firms are calling the shots?

The 'model' that smart cities have followed is being torn apart by Next Geopolitics.

​Behind this are new technology coalitions, also mentioned by CIF in its report. When it comes to 5G or artificial intelligence (AI), nations are buying from the whole world. This will expand to smart cities increasingly built on a certain geopolitical axis.

From design to funding to construction to maintenance, smart cities will not just be built from a social or economic lens, but from a geopolitical lens too. And as different smart cities possess technologies from different nations, they may not be able to connect or integrate the way they once could.

Blockchain, AI Ethics Among Top 10 Next Geopolitics Risks in 2021, Leading Futurism Consultancy Says
But another powerful transformation is here. In Next Geopolitics, cities and companies are as important stakeholders as countries, and if cities are being designed geopolitically, from the onset, then the way geopolitics functions changes.

This means that in a single nation, foreign powers will be clashing over cities. In Next Geopolitics, nations could be divided internally, on new fault lines they never even imagined may form.

SPUTNIK: How could a potential 'trade world order' aimed at removing barriers to data flows function in principle? Which institutions would oversee the rules governing such an order and would they meet resistance from opposing organisations, such as the GPAI and D10 opposing the RCEP or Eurasian Union? What's the best possible outcome for facilitating global interconnectivity?

Abishur Prakash: This idea of a new, global institution emerging to govern technology is not in alignment with how the world works. Instead, the next global institutions, if they exist, will likely revolve around a specific technology like AI. This is why, last year, I proposed 'AI20' as a way for companies, corporations and cities, to manage the challenges AI is bringing.

Short of this, what is possible is that an existing institution, like the World Trade Organization (WTO), may expand its technological focus to areas like data, meaning creating an open approach to how data moves, similarly to what Japan has proposed around G20 nations creating open cross-border data flows.

Nat'l Rivals Not Afraid to Pull Punches as Next Geopolitics Reshapes Global Tech Race, Futurist Says
The difference is, by having a specific institution in charge, certain practices will be adopted. And, nations will think twice before taking steps that could negatively impact others.

Of course, there is going to be the challenge over who has the jurisdiction to govern. For example, Australia is a member of the WTO, as well as the D10 and GPAI, and could potentially become a member of AI20.

Whose data rules will Australia follow, and, if there are so many groups, Australia may be inspired to create its own data coalition, meaning the past model of 'global rules' will be challenged.

SPUTNIK: Execs have voiced concerns over the World Trade Organisation (WTO) and called for the institution to be reformed. Which reforms does the WTO need and how can it adapt to the challenges of next geopolitics?

Abishur Prakash: The biggest challenge the WTO faces is that the balance of power is shifting towards non-Western nations. The West created, and supported, the WTO because it was in charge. Except, now, as India and China rise, and as Africa becomes an economic superpower over the coming decades, there will be new clashes over who controls the WTO.

At the center of these clashes will be technology. How should the WTO manage trade of automation if it is resulting in job losses, or handle commercial disputes around gene editing if the divide between the rich and poor is increasing?

One way the WTO can reform is by putting unexpected nations in power. Instead of it only being the established powers deciding what happens, what if the WTO put Argentina, Kenya and Thailand in charge? These nations may have unorthodox ideas that do not stem from the global superpower competition.

Another way the WTO can reform is by expanding into space. In the coming years, there will be huge disputes over space and trade such as space mining will be a big part of this.

In my book, Next Geopolitics: Volume One I go in-depth, describing the economic value of asteroids and what is at stake. Except, nobody is leading in space, creating a void that other nations are filling. Recently, the United Arab Emirates (UAE) announced a court to arbitrate disputes and treaties in space.

However, the biggest change the WTO can make is this. The WTO was formed out of a need to lead economies to success. In more recent years, it has become dominated by the individual desires of a handful of big nations. If the WTO can return to its roots of helping build successful economies, it may have a shot at playing a leading role in Next Geopolitics.