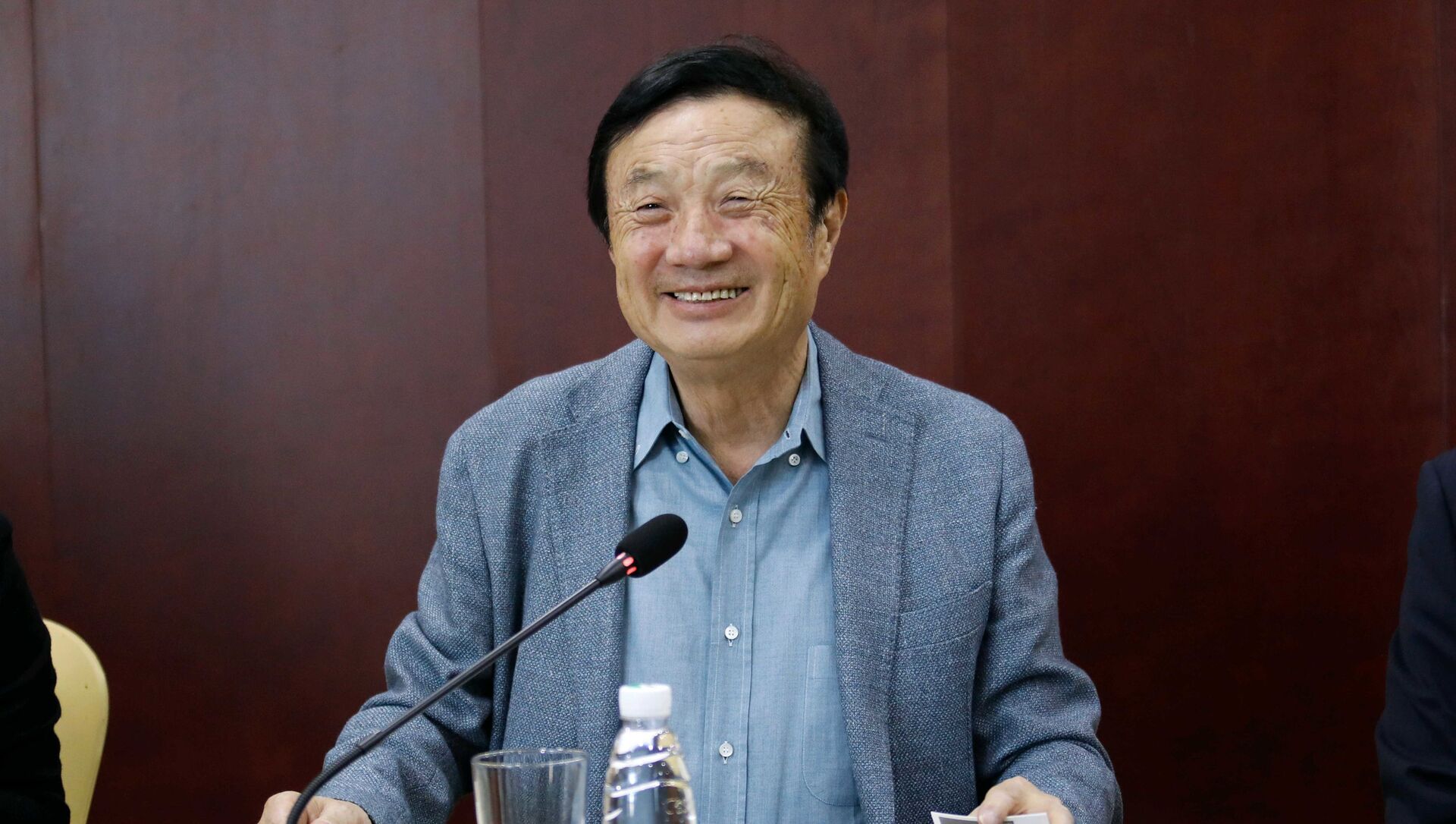 Demond Cureton
All materialsWrite to the author
The founder and chief executive of the world's largest IT equipment firm spoke to journalists in a heartfelt interview about developments in company operations as well as the ongoing US trade war on China, which has lead to countermeasures from Beijing and efforts to decouple from foreign tech.

Huawei Technologies has called on the newly-appointed Biden administration to build a more open policy towards Chinese tech firms, company founder and chief executive Ren Zhengfei said at a meeting with the press on Tuesday.

Speaking to the press in an opening ceremony at the Intelligent Mining Innovation Lab in Taiyuan, Shanxi in China, Ren explained the Chinese telecoms giant did not want to become involved in Washington's trade war.

“Our company does not have the energy to be involved in this political whirlpool. We strive to make good products. We hope that the US government can have a more open policy for the benefit of American companies and the development of the US economy,” Ren said, speaking on the ongoing US-China trade war in a transcript seen by Sputnik.

When asked about what he would discuss with US President Biden, Ren told the media that he would urge "common development" between the US and Chinese markets.

"Both the US and China need to develop their economies, as this is good for our society and financial balance. Everyone needs this. As humanity keeps making progress, no company can develop a globalized industry alone. It requires concerted efforts around the world," he said.

But he noted it would be “extremely difficult to remove Huawei from the entity list,” echoing comments from Biden's commerce secretary Gina Raimondo, who said she saw "no reason" why Huawei should be removed from the US blacklist.

“I will not say it is impossible, but it is extremely difficult, so basically, we do not have that expectation. We just want to work hard, and we have plenty of money and can hire a lot of scientists,” he added.

There would also be no "major structural changes" to the company's management team, Ren said, responding to rumours that Huawei rotating chairman, Eric Xu, would leave the firm.

When asked about whether Huawei would sell off its high-end smartphone business and seek semiconductors from Taiwanese firm MediaTek due to the ongoing US trade war on China, Ren told the press that the US government needed to "take a look at its own chip industry".

Next Geopolitics Threatening Data Flows As Execs Urge New Trade Order, Top Futurism Consultancy Says
The US, Europe and Japan considered semiconductors important, but would face a "surplus of chips, like what happened with real estate", Ren said.

"We won't invest in making chips. Turning sand to silicon isn't our thing. We are good at math, and we rely on globalization. We won't give up this ideal of globalization and will continue doing business this way, no matter how harsh the sanctions or blocks are. One day, when the market is flooded with chips, I bet others will be begging us to buy them," he warned.

Devices were also not limited to mobile phones, but extended to products such as "laser radar, ultrasonic radar, and Doppler radar for self-driving vehicles", among others, he said.

"Mobile phones are only one part of the device category. So Huawei may transfer our 5G technologies to others in the future, but will never sell our device business," he told the media.

The founder also restated Huawei's intention to share its 5G technologies with US tech firms and said the company would "never sell its [entire] consumer business" consisting of smartphones, wearables and audio equipment, among others.

The company's 5G technologies could be transferred "in its entirety", including rights to development and source coding, he explained, adding: "If the US needs our chip technology, we can transfer it. Our words are sincere [but] no company has come to negotiate with us so far".

The Shenzhen-based firm was forced to sell its budget brand Honor in late November to a consortium of investors, including the Shenzhen government, to allow the company access to key components from Qualcomm, Intel, Microsoft and others.

Tech Nationalism to Worsen Global Recovery, 5G Rollout, Execs Say at Huawei TrustInTech Summit 2020
The firm also expanded into smart vehicles, artificial intelligence (AI) and cloud services to restructure its operations, and the new business model could "offset the decrease in revenue" from smartphones in 2021, he said, adding Huawei's 5G technologies still lead in industrial applications and consumer devices despite a drop in global market access.

He also spoke on Meng Wanzhou, Huawei's chief financial officer, who remains detained by Canadian authorities pending a ruling on a potential extradition to the US on charges of violating sanctions against Iran. Meng and Huawei have repeatedly and sharply denied the charges.

“The case of Meng Wanzhou is a political manoeuvre operated by the US. There are some issues with how Canada implements that. We still believe in Canada’s legal procedures,” he added.

The comments come after the world's largest IT equipment provider was blocked from building 5G networks in several key markets, including the US, United Kingdom, Australia, New Zealand, Japan and Sweden, among others.

Smartphone sales for the firm also slipped from second to fifth place last year after losing access to Google Mobile Services and crucial components, including semiconductors, according to the South China Morning Post (SCMP).

Huawei along with ZTE, TikTok owner ByteDance, WeChat's Tencent and dozens of Chinese tech firms were been targeted in recent months by Washington in the ongoing trade war on alleged national security concerns.

Chipmaker Group Urges Biden Government To Reassess 'Unilateral' Trump-Era Trade Ban, Policy On China
The former two were added to an entity list in May 2019, blocking them from doing business with US firms, and later designated national security risks for alleged ties to the Chinese Communist Party and military, without evidence.

But Huawei has joined efforts with other mainland tech companies to set standards in China's domestic chipmaking industry in a bid to reduce dependence on key US technologies and along with the State Council's plans to decouple from the US.