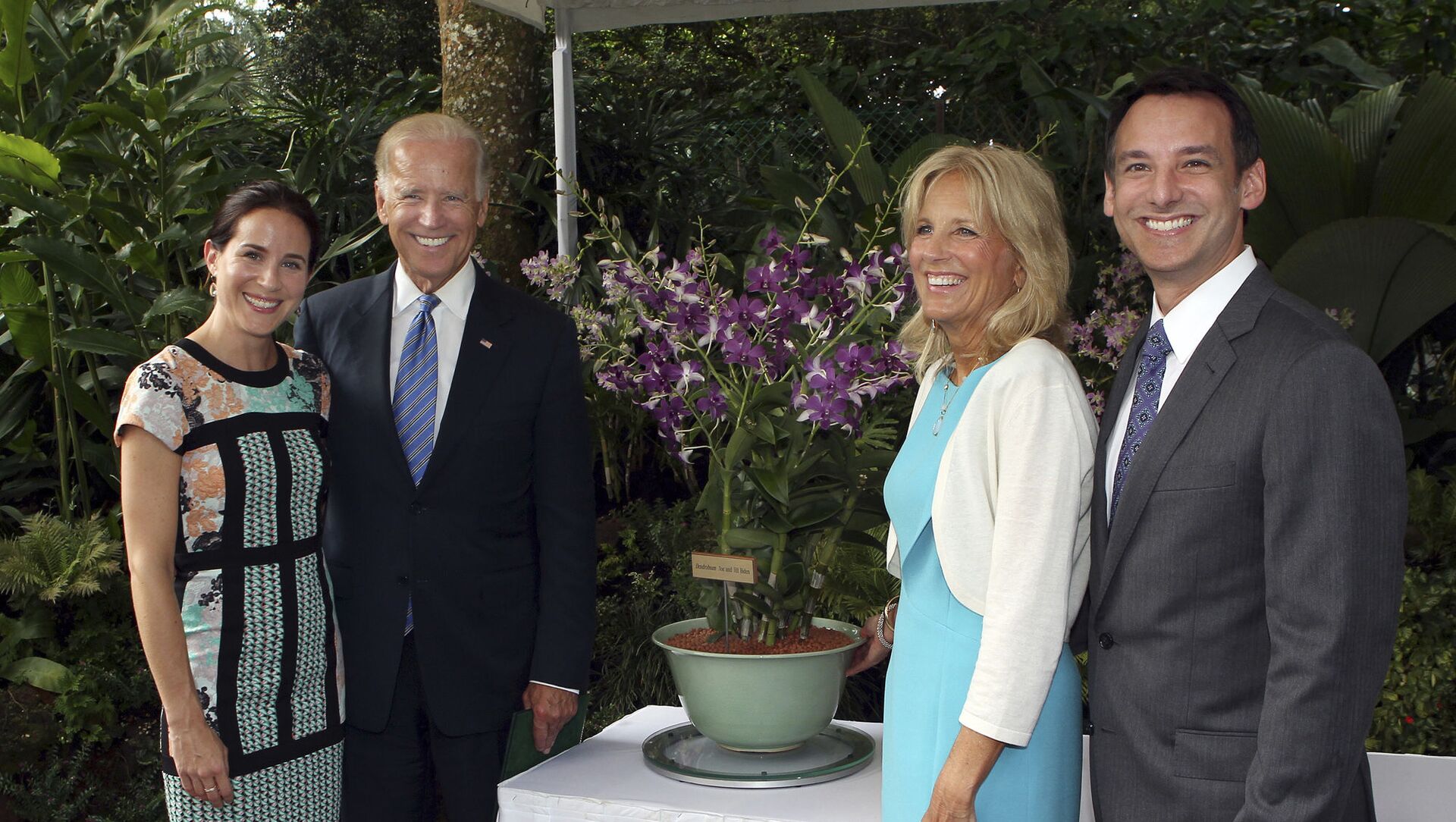 Ilya Tsukanov
All materialsWrite to the author
For much of 2020, Joe Biden was dogged by claims that he intervened to freeze a billion dollar US loan to Ukraine over a Kiev prosecutor’s probe into possible money laundering activities of a Ukrainian gas company his son Hunter Biden was working for. Now, investigators say his ties with his son-in-law may be another scandal waiting to blow up.

It was previously reported that Krein, husband of Biden's daughter Ashley Biden, was heavily involved in helping to formulate the Democratic candidate’s planned pandemic response during the presidential campaign, with US media mentioning that he took part in “daily calls to brief Biden” on coronavirus policy.

Medical Startups ‘Need All the Help They Can Get’

Now that Biden has taken office, companies have been flocking to StartUp Health, seeking to use the venture capital firm’s potential influence with the Biden administration to make money.

“Our goal with StartUp Health is to leverage their relationships and work with state and federal agencies,” Prasad explained. “Health care is a very tough place to run a startup…so as a startup you need all the help and support you can get. That’s where StartUp Health plays a critical role. It’s a support system to lean on,” he added.

Leon Eisen, CEO of Oxitone, a company which makes wearable pulse monitors, and which has also partnered with StartUP Health, agreed that Krein’s connections may have helped the company in earnings, while insisting that everything remains on the up-and-up ethics-wise.

Help From a Powerful Friend

Krein co-founded the health-based venture capital firm in 2011 along with his brother Steven Krein and tech entrepreneur Unity Stoakes, and has been involved in helping to oversee nearly $2 billion in investments in “a global army of entrepreneurs,” including those now seeking to sign lucrative contracts with the government.

Joe Biden has been an active supporter of StartUp Health for nearly a decade, taking company executives on tours of the Oval Office while serving as President Barack Obama’s vice-president, and regularly appearing at corporate events hosted by the company.

In a keynote speech at the 2018 StartUp Health Festival in San Francisco, Biden called Krein “one of the finest men I’ve ever known in my life,” and said that “when a father-in-law says that you know it means something.” He stressed however that it was the company’s effort to “chang[e] the culture to vastly expand cooperation,” and “not just my incredible admiration for my son-in-law,” that attracted him to the company.

The potential conflict of interest is immense, since Krein could theoretically advise Biden directly to pen government contracts with companies the venture capital firm has invested in, convince him to pursue policies which benefit those companies, or even provide firms with confidential information.

A White House spokesperson dismissed any ethical concerns, however, telling ABC News that “Biden has set and maintained the highest ethical standards for himself, his administration, and those around him,” and saying that “any implication to the contrary is flatly untrue and unsupported by the facts.”

Last week, Biden pledged that no members of his family or extended family would be involved in any government decisions.

Coronavirus Billionaires: Forbes Lists 50 New Medical Industry Moguls Who Got Rich Off Pandemic
Johannes Lenhard, a University of Cambridge ethics researcher, downplayed concerns associated with Krein’s connection to Biden, saying that “this whole world is based on insider knowledge, and the information is not equally distributed.”

“A lot of stuff that would be totally outrageous in banking, like this idea of insider trading, is totally commonplace in venture capital. Every deal, in a sense, is based on specific information that an investor might have gotten from their network,” he explained.

However, Meredith McGehee, director of a Washington-based watchdog, suggested that Krein is “playing with fire,” and “if he gets too close to that flame – if he is trying to either cash in on his relationship, or he is trying to influence policy – the flame is going to get him.”

Joe Biden’s potential conflict of interest in his relationship with his son-in-law has been little reported on compared to the scandals involving his son, 51-year-old lawyer and corporate executive for hire Hunter Biden, who was mixed up in an alleged pay-to-play scandal which nearly derailed his father’s presidential ambitions in 2020.

In 2019, President Donald Trump sought to pressure the Ukrainian government to reopen a probe into Hunter’s lucrative $50,000-a-month no-show job for Ukrainian energy company Burisma, which he was ostensibly given in exchange for access to Joe Biden. In 2016, Biden pressed then-Ukrainian President Petro Poroshenko to squash a Ukrainian prosecutor’s probe into Burisma over potential money laundering activities, threatening to withhold $1 billion in loan guarantees to Kiev unless the prosecutor was fired. Poroshenko complied, and the investigation was dropped.

Trump’s probing prompted the Democrats to launch an impeachment inquiry against him, and to accuse the president of illegally trying to get dirt on his would-be opponent in 2020. The House of Representatives impeached Trump on charges of abuse of power and obstruction of Congress in late 2019. Trump was cleared of any wrong-doing by the Republican-dominated Senate in February 2020.

‘My Boy’s Back’: Biden Says He Felt ‘Hope’ Reading Son Hunter’s Upcoming Book
In October 2020, the Biden corruption saga gained fresh impetus after a New York Post article detailed alleged evidence found on Hunter Biden’s laptop showing that along with Burisma, he was involved in correspondence with a wide variety of foreign officials and businesspeople seeking to arrange meetings with his influential father in exchange for cash. Most US mainstream media ignored the story ahead of the 3 November election or dismissed it as a "conspiracy theory," while Facebook and Twitter cracked down on its sharing.

Senior Republicans have sought to pursue the Biden scandal in the legal arena. However, late last year, outgoing Trump Attorney General Bill Barr announced that he would not appoint a special counsel to investigate the president-elect's son. The Justice Department continues to probe Biden’s finances, including his Chinese business dealings, and other transactions. The investigation was started in 2018, but revealed to the public only in December 2020, after the election.