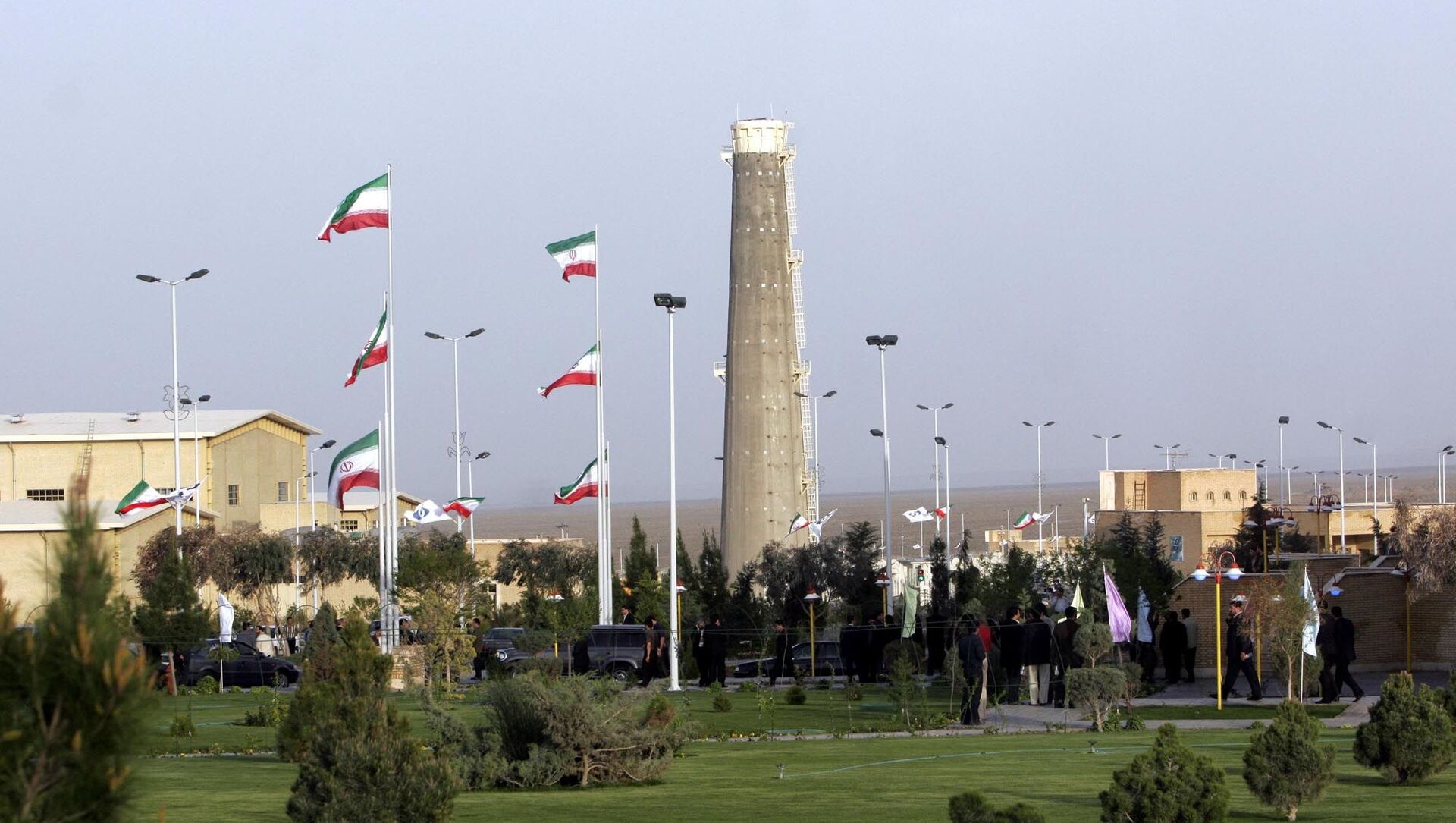 © AP Photo / HASAN SARBAKHSHIAN
Subscribe
Ilya Tsukanov
All materialsWrite to the author
The Biden administration has sent mixed signals regarding its intentions to rejoin the Joint Comprehensive Plan of Action Iran nuclear agreement, planning to ease pressure on Tehran without lifting sanctions, while demanding that the Islamic Republic return to its obligations under the treaty. Iran says Washington must remove all sanctions first.

The United States will comply with the JCPOA if Iran does, White House Spokeswoman Jen Psaki has said.

"If Iran comes into full compliance with its obligations under the JCPOA, the United States would do the same, and then use that as a platform to build a larger and stronger agreement that also addresses other areas of concern," the spokeswoman said in a briefing in Washington, DC on Monday.

Psaki also sought to clarify President Biden's remarks Sunday that the US would not lift its crushing sanctions against Tehran unless Iran stops its uranium enrichment activities first.

"I think if we were announcing a major policy change, we would do it in a different way than a slight head nod, but overall his position remains exactly what it has been," the spokeswoman said.

In his Sunday interview with CBS Face the Nation, Biden nodded in the affirmative after being asked whether Iran would have to "stop enriching uranium first" before the US would consider a return to the nuclear deal. A spokesperson for the president immediately clarified that he meant to say "enrichment activities beyond limits outlined by the JCPOA."

NEW: In an interview with @CBSEveningNews, @POTUS tells @NorahODonnell the US will not lift sanctions against Iran unless the country stops enriching uranium:

"Will the U.S. lift sanctions first in order to get Iran back to the negotiating table?”

In her remarks on Monday, Psaki said that the "stronger agreement" the US is looking for would be negotiated "with our P5+1 partners as it was done when we were putting together the JCPOA in the first place," P5+1 being the reference to the five permanent members of the United Nations Security Council, plus Germany, which negotiated together with Iran to reach the nuclear deal in 2015.

Pressed on the argument put forth by Iranian leaders that it is up to Washington to reengage with Iran because the US was the party that abandoned the JCPOA in the first place, the spokeswoman said the administration's position was clear.

"Those were actions of the former administration, as you know. And President Biden of course was part of an administration that were advocating for the plan to be put together to begin with. I think his position, and the position of our national security team, and the position that he's been in discussion with our partners about, or I should say conveying to our partners, is that it's really up to Iran to come back into full compliance with its obligations under the JCPOA and at that point we could move the discussion forward," Psaki said.

On Sunday, Iranian Supreme Leader Ali Khamenei tweeted that the US "must lift all sanctions" if it wants Iran to return to full compliance with the JCPOA.

Iran's Supreme Leader: Tehran to Return to Compliance With JCPOA Only if US Lifts Sanctions First
Later in the day, Iranian Foreign Minister Mohammed Javad Zarif specified that because it was the United States which "violated the deal" and "punished any country that remained respectful and complied with the deal," it was up to Washington to "return to the deal" and "implement its obligations."

The Trump administration unilaterally pulled out of the JCPOA in 2018, and slapped Iran's banking and energy sectors with crushing sanctions, while threatening to implement secondary sanctions against countries and companies that continued to do business with the Islamic Republic. Iran responded in 2019 by reducing some of its commitments under the nuclear deal, increasing uranium enrichment beyond the 3.67 percent level outlined in the JCPOA, and increasing stockpiles of the nuclear fuel. Last month, Iran reported that its uranium enrichment levels at the Fordow nuclear facility had reached 20 percent.

The country's enrichment levels remain well below weapons-grade (i.e. uranium that has been enriched to 90 percent or more). Iran also maintains that it has no intention of pursuing a nuclear weapon, or weapons of mass destruction of any kind.

Last week, US Secretary of State Antony Blinken raised eyebrows by echoing long-standing Republican and Israeli claims that Iran may be just "weeks" from accumulating enough fissile material to build a nuclear bomb. Israeli officials, who played a prominent role in lobbying the Trump administration to pull out of the JCPOA, have been making similar allegations for most of the last decade.

000000
Popular comments
Yeh, just like they demanded that Great and Auspicious Leader of North Korea annihilate all of his nuclear weapons and production factories and then and only then the usa will CONSIDER which sanctions May be taken off at some FUTURE time. What's the result? Kim is still cuddling his nuclear babies and making more. Where is the Fire and Fury as promulgated at the united nations by the not-so-great president of the usa from the podium in the not-so-great country in the world? Fire and Fury was ultimately realized in the very seat of world democracy, and the great nation is still working to solve the problem. Good luck.
goldcamshaft
8 February, 20:40 GMT12
000000
Iran will continue it's reduction to JCPOA and will expel the iaea from Iran. Iran has been thwarting the sanctions and will keep doing that until it becomes %100 self-sufficient.---------------Iran just brought another Observatory on line. Iran is in exponential progress despite the COVID difficulties.
Chamroosh
8 February, 20:44 GMT7
000000
Newsfeed
0
New firstOld first
loader
LIVE
Заголовок открываемого материала
Access to the chat has been blocked for violating the rules . You will be able to participate again through:∞. If you do not agree with the blocking, please use the feedback form
The discussion is closed. You can participate in the discussion within 24 hours after the publication of the article.
To participate in the discussion
log in or register
loader
Chats
Заголовок открываемого материала
Worldwide
InternationalEnglishEnglishMundoEspañolSpanish
Europe
DeutschlandDeutschGermanFranceFrançaisFrenchΕλλάδαΕλληνικάGreekItaliaItalianoItalianČeská republikaČeštinaCzechPolskaPolskiPolishСрбиjаСрпскиSerbianLatvijaLatviešuLatvianLietuvaLietuviųLithuanianMoldovaMoldoveneascăMoldavianБеларусьБеларускiBelarusian
Transcaucasia
ԱրմենիաՀայերենArmenianАҧсныАҧсышәалаAbkhazХуссар ИрыстонИронауОssetianსაქართველოქართულიGeorgianAzərbaycanАzərbaycancaAzerbaijani
Middle East
Sputnik عربيArabicArabicTürkiyeTürkçeTurkishSputnik ایرانPersianPersianSputnik افغانستانDariDari
Central Asia
ҚазақстанҚазақ тіліKazakhКыргызстанКыргызчаKyrgyzOʻzbekistonЎзбекчаUzbekТоҷикистонТоҷикӣTajik
East & Southeast Asia
Việt NamTiếng ViệtVietnamese日本日本語Japanese中国中文Chinese
South America
BrasilPortuguêsPortuguese
NewsfeedBreaking
01:50 GMTCongress to Get Tough on Armed Services After 2,000 Military Firearms Stolen During the 2010s
01:21 GMTOld Habits: Big Tobacco's Annual Cigarette Sales Increase for the First Time 20 Years, FTC Reports
01:00 GMTBlinken Speaks to Sudan Prime Minister, Welcomes His Release - State Dept.
YesterdayChina Pushes Vaccination Program Ahead as Lanzhou Placed in Lockdown to Contain New Covid Cases
YesterdayAre Manchester United and Antonio Conte a Good Fit?
YesterdayAngry Emojis Only!
YesterdayThe Spice Must Flow: ‘Dune’ Sequel Greenlit After Successful Opening Weekend at US Box Office
YesterdayRightwing Chilean Newspaper Sparks Outrage after Tribute Article to Hermann Goring
YesterdayUS Intelligence Unit Seeks Way to Detect Radio Signals That Indicate Data Breaches
YesterdayUS Senate Confirms Ex-Republican Senator to Be Next Ambassador to Turkey
YesterdayUnited Airlines Pilots, Workers Refusing to Fly With Unvaccinated Colleagues, Court Docs Reveal
YesterdayEx-Lehman Brothers Exec Predicts 3 More Years of Inflation, Tech Stocks to 'Get Crushed'
YesterdayBacking for Increased US Police Budgets Surges to 47% Amid Rise in Violent Crime – Poll
YesterdayAt Least 6 Killed, 10 Injured in Attack by IS Militants in Eastern Iraq - Source
YesterdaySection of Biden's Infrastructure Bill for Fighting Climate Change Reportedly Tops $500 Billion
YesterdayManchester United Hierarchy Reportedly Split on Ole Gunnar Solskjaer’s Future
YesterdayTexas Becomes Latest US State to Pass Anti-LGBTQ Law, Banning Trans Girls From Female Sports
YesterdayLe Pen Says Hungary's Orban Backs Launch of Hard-Right Alliance in Coming Months
YesterdayInvestors George Soros, Reid Hoffman Help Launch Group to Combat Online Disinformation
YesterdayChicago City Council Prepared to Vote on $31 Million Program to Assist Low-Income Households