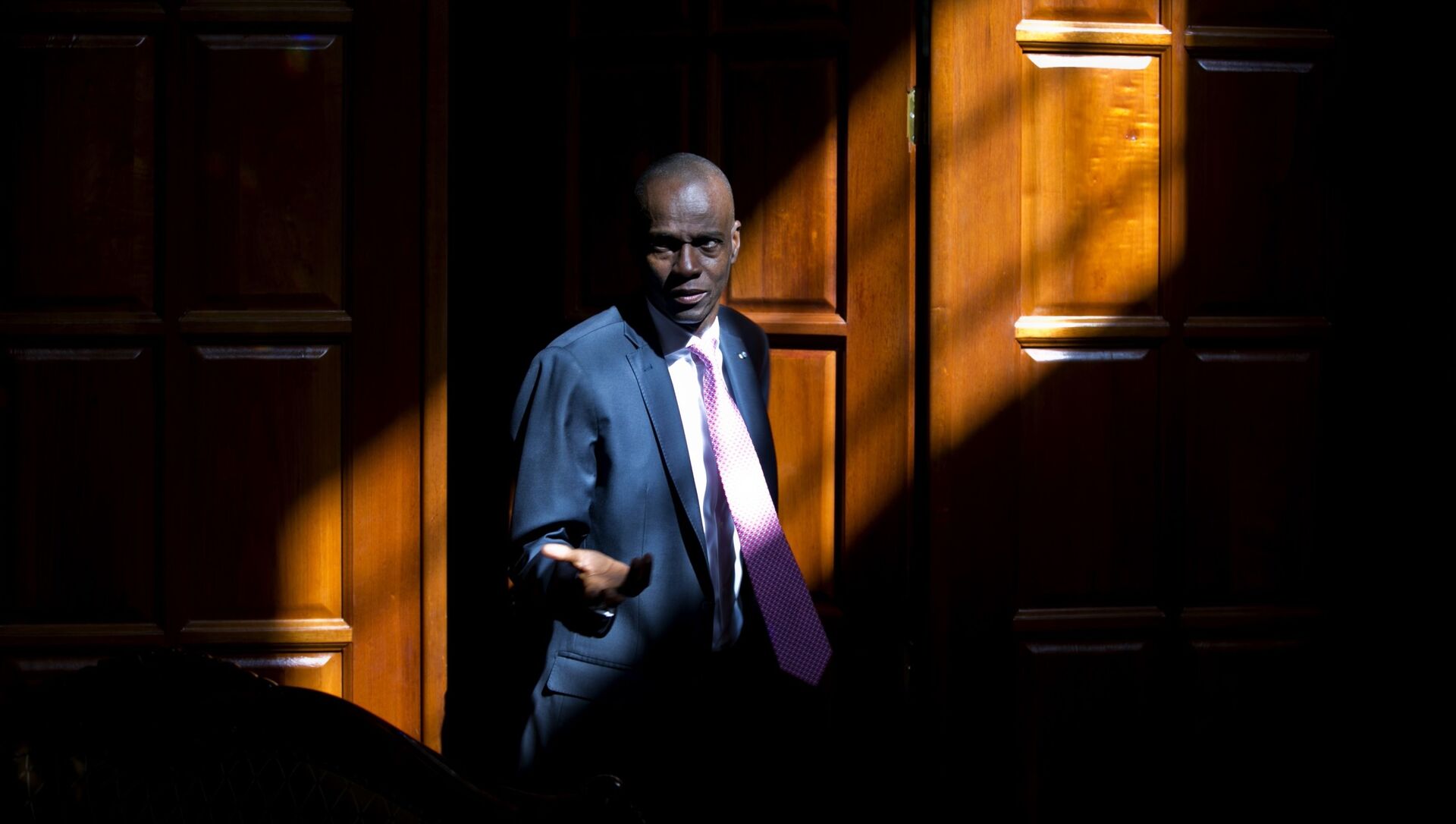 Morgan Artyukhina
All materialsWrite to the author
Haitian President Jovenel Moise won the disputed 2015 election, but thanks to a prolonged investigation, was not inaugurated as president for a full year following the vote. As a result, he now claims his five-year term should be another year longer, to compensate.

Nearly two dozen members of the Haitian government were arrested over the weekend in what Haitian President Jovenel Moise has called a “coup.” Critics say that, according to the Haitian Constitution, Moise’s term expired on Sunday and the arrested figures were preparing an interim government to follow his departure from office.

On Monday, a correspondent from Gazette Haiti News reported that Haitian soldiers had fired live ammunition at a crowd of protesters in Champ de Mars in downtown Port-au-Prince, wounding two journalists. They also shot tear gas at the crowd.

US State Department spokesperson Ned Price said on Friday that the US backs the OAS position and that “a new elected president should succeed President Moïse when his term ends on February 7, 2022.” United Nations Secretary-General Antonio Guterres has done the same.

In response, US Rep. Gregory Meeks (D-NY), whose district includes a large number of Haitian-Americans, sent a letter to US Secretary of State Antony Blinken condemning “President Moïse's undemocratic actions in Haiti, urging for a Haitian-led democratic transition of power.”

Today I co-led a letter to @SecBlinken with @RepYvetteClarke to condemn President Moïse's undemocratic actions in Haiti, urging for a Haitian-led democratic transition of power. The full text of the letter: https://t.co/CDGgmpM45L pic.twitter.com/pkuriOY5TS

Levin blasted Moise’s move on Sunday, tweeting that “With no evidence to support his claims of a conspiracy against his life, Moïse is demonstrating what my colleagues and I have said: there is zero chance of real elections, real democracy or real accountability while he remains in power. I am deeply saddened but unsurprised that Moïse has escalated his anti-democratic campaign with a mass arrest of opposition officials and others on what should be his final day in office.”

“I am not a dictator,” Moise said in a national address on Sunday. “My term ends Feb. 7, 2022.” Earlier, Justice Minister Rockefeller Vincent said an attempted coup and an attempt on Moise’s life had been aborted and that 23 figures had been arrested, including Supreme Court judge Hiviquel Dabresil and Marie Louise Gauthier, inspector general of the Haitian National Police.

Citing a ruling by the country’s Superior Judicial Council, the opposition claims that Moise’s term ended on Sunday, according to the Haitian constitution, which lays out five-year terms for presidents. However, Moise has contended that his term should last another year, since an interim government held power during the first year of his term thanks to election irregularities that delayed his inauguration.

The opposition named Mecene Jean-Louis, formerly a Supreme Court judge, as the interim president to rule until new elections can be organized for both a president and the parliament, the latter of which saw its term end last month without a new parliament elected to replace it.

President Joseph Mécène Jean-Louis has already addressed the nation. He says he recognizes the end of @moisejovenel's term on Feb 7, as the constitution demands, and accepts the appointment by the opposition and civil society as #Haiti's interim president. https://t.co/SyX1f2Twpm pic.twitter.com/ZjlUfXxf6y

​In an unusual statement in May 2020 that seemingly went against its charter, the Organization of American States (OAS) intervened in the affairs of a member state by coming down on the side of Moise. The international group, headquartered in Washington DC, is widely seen as representing US interests in Latin America and has energetically opposed several governments in the region that refuse to follow Washington’s lead, including those in Venezuela and Bolivia.

Opposition to US Meddling

Protests broke out across both Haiti and diaspora communities in the US over the weekend, demanding the US stop involvement in Haitian affairs and that Moise step down.

Activists in #Haiti, angry over Joe Biden's support for the former puppet president who refuses to step down, while attempting to establish a dictatorship, burned an American flag this morning. pic.twitter.com/Sgkx5e50Yz

Haitian-Americans in Brooklyn, NY in solidarity with the freedom fighters in #Haiti.

Just arrived in Little #Haiti where some Haitian activists are trying to have a protest amid the rain to ask for departure of their homeland’s president. In addition to this sign they have images of Haitians killed in Haiti in last 4 years. pic.twitter.com/Ejy47ZqCfv

​As the nonprofit group North American Congress on Latin America (NACLA) has demonstrated, the US has repeatedly intervened in Haitian affairs, especially since the catastrophic 2010 earthquake that killed at least 230,000 people, helping to craft the present crisis by ensuring that Moise and his Tet Kale party took power and retained it, including by backing the delays in the 2015 election process that created the present constitutional crisis.

Before Moïse, President Michel Martelly oversaw reconstruction efforts after the 2010 earthquake, putting the emphasis on profit-generating enterprises that served foreign interests, including tourism, agribusiness, sweatshops, and mining, ensuring that donors to the Clinton Global Initiative directing aid to the country “made out like bandits,” as NACLA put it. Hillary Clinton was US Secretary of State at the time of the quake and helped to ensure Martelly’s triumph.

As Sputnik previously reported, Martelly was suspected of embezzling funds from a PetroCaribe program in which Venezuela provided Haiti with highly subsidized oil, enabling Port-au-Prince to sell it on the market and use the profits for social programs. That money is also believed to have helped ensure Moïse's election victory.

Once a wealthy French colony, Haiti became independent in 1804 after African slaves brought to the country by French planters rebelled, defeating a brutal anti-colonial campaign by French Emperor Napoleon Bonaparte that devastated the country. However, the republic of freed Black slaves became an instant pariah in the western hemisphere, as it was surrounded by nations where slavery remained legal, ensuring that it would never be able to recover. Haiti later became a perennial source of cheap labor and massive profits for American companies, with the US intervening many times in Haiti's history to remove leaders who challenged the status quo.

In a cruel twist of fate, Moïse's declaration on Sunday fell on the 35th anniversary of the overthrow of the US-backed ruler Jean-Claude "Baby Doc" Duvalier, who ruled Haiti with an iron fist and who fled the country on a US government aircraft.