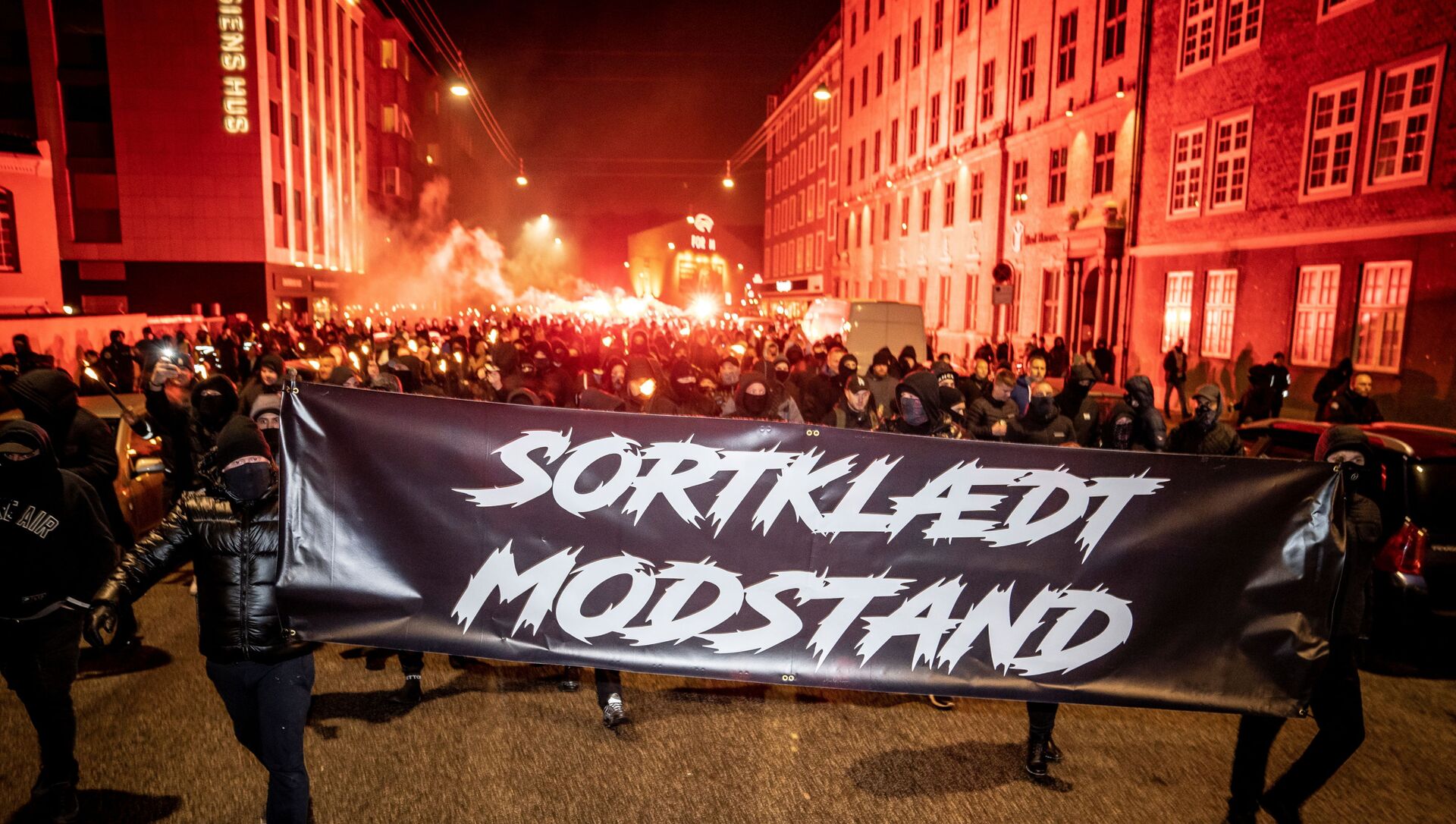 Igor Kuznetsov
All materials
The protesters fear that the so-called vaccine passport creates a push to be vaccinated, amounts s to further restrictions on individual freedom, and will ultimately promote inequality or even divide people into classes.

Hundreds of people took to the streets of Copenhagen this weekend to protest Denmark's COVID-19 restrictions amid the country's plans to introduce a digital vaccination certificate.

Organised by a group called Men in Black, the protests gathered some 600 people in front of the Danish parliament despite the rare cold spell with sub-zero temperatures Denmark is now experiencing.

The protesters marched through the streets of the Danish capital to protest what they saw as the “dictatorship” of the ongoing partial lockdown and other measures to contain the spread of the virus. Some of the protesters wore hoods and bore torches, chanting “we have had enough” and “freedom for Denmark”.

The march was authorised, with a large contingent of police deployed, yet went largely peaceful, unlike previous demonstrations arranged by Men in Black in the cities of Aalborg and Copenhagen, which ended with riots and arrests.

​Two weeks ago, protests in Copenhagen saw the burning of Danish Prime Minister Mette Frederiksen in effigy as an image of popular discontent. This led to the arrest of two men for threats against Frederiksen and stirred a stern condemnation from Danish politicians. 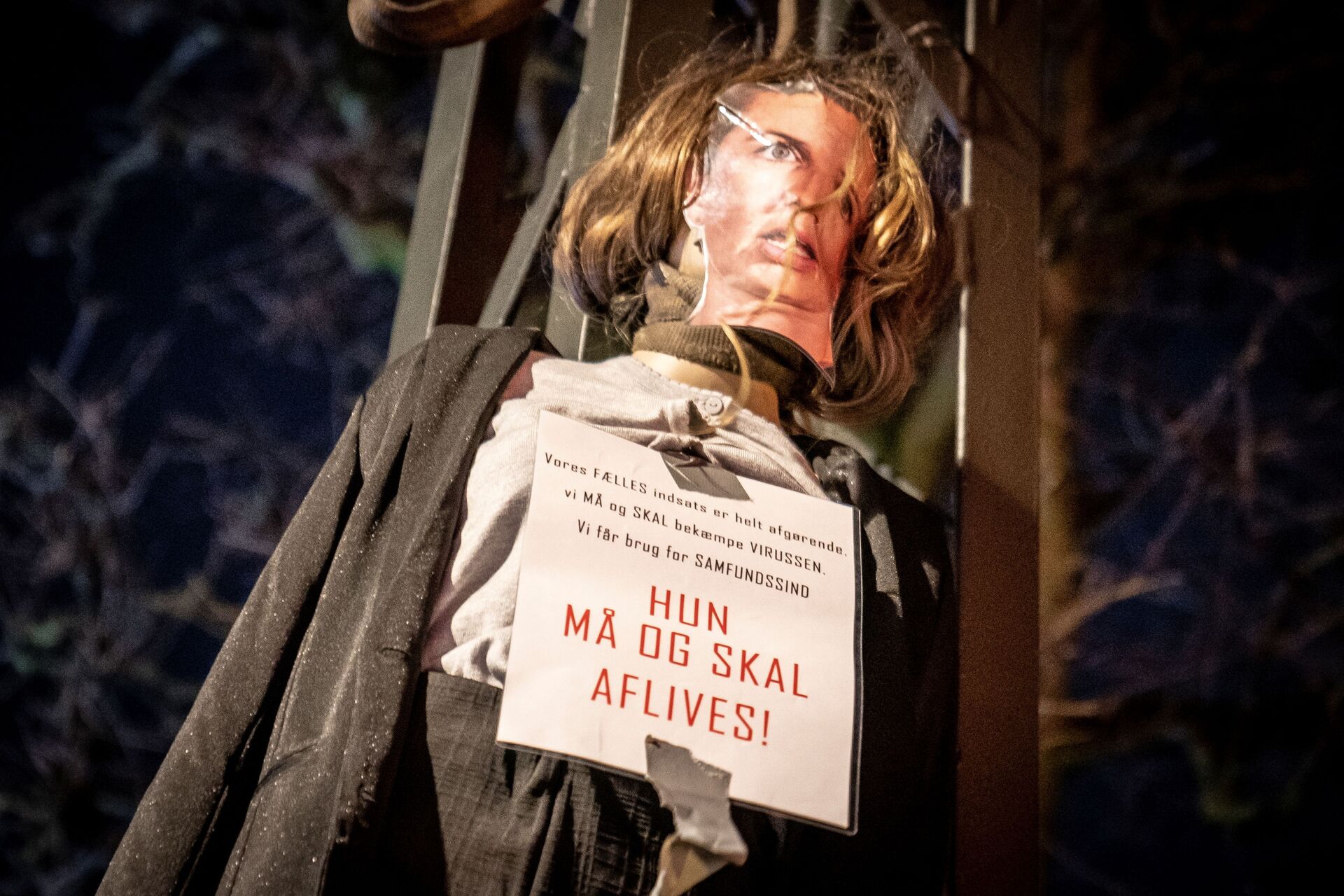 An effigy representing Danish Prime Minister Mette Frederiksen with a sign reading "She must be put down" hangs on a street during a protest by a group called Men in Black against COVID-19 restrictions in Copenhagen, Denmark
© REUTERS / RITZAU SCANPIX

Men in Black is a citizens' organisation that presents itself as “children of Denmark” and defenders of freedom. “We march for and with entire Denmark and everyone”, the group's Facebook page with some 20,000 members says.

This time, however, Denmark's plans for a digital vaccine “passport” were one of the main targets of the protesters' anger. Last week, Denmark voiced plans to develop a digital certificate for COVID-19 vaccination and travelling. Heavily lobbied by the country's industry organisations, the certificate could also potentially be used for sports and cultural events as well as restaurants to allow a speedy re-opening of the nation, which is currently in partial lockdown.

The protesters, however, fear such a passport implies an obligation to be vaccinated and constitutes a further restriction on individual freedom. So far, vaccination in Denmark is not compulsory, but some people fear the certificates will promote inequality or even divide people into classes.

“We will keep going until we win. We must have businesses re-opened, and we shouldn't have a vaccine passport that excludes people”, demonstrator Claus Kristiansen told the newspaper Berlingske.

Non-essential shops, bars, and restaurants have been closed in the Scandinavian country of 5.8 million people for weeks, and the government has extended the restrictions until at least 28 February. However, primary schools will re-open on Monday 8 February.

Denmark's neighbours Finland and Sweden are also in the process of developing vaccine certificates. According to Swedish Digitalisation Minister Anders Ygeman, the goal is to launch digital “passports” by 1 June. Similar preparations are underway in Finland.

Denmark has registered over 200,000 COVID-19 infections in total, with 2,200 coronavirus-related deaths, being the second worst hit Scandinavian nation after Sweden.