Ekaterina Blinova
All materialsWrite to the author
As Donald Trump impeachment trial over the alleged “incitement of insurrection” is set to begin the week of 8 February, the hashtag #NeverForgetJanuary6th went trendy on Twitter on Sunday with a chorus of left-leaning media, Democratic entities, and users ramping up the rhetoric against the Capitol protesters.

The 6 January protests at Capitol Hill have become the centrepiece of the Democratic Party's second impeachment case against Donald Trump. In the immediate aftermath of the Capitol breach, House Democrats introduced the Domestic Terrorism Prevention Act (DTPA) on 19 January, arguing about the need to crack down on home grown extremists. For its part, the Department of Homeland Security issued its first-ever national terrorism bulletin on 27 January warning about the looming threat of violent domestic extremism supposedly emboldened by the DC riots.

Who Benefits from Ramping Up the Rhetoric?

"There has been a tremendous amount of disinformation spread about the events of 6 January at the US Capitol coming from both the mainstream media and politicians in Washington that have made it very unclear as to what actually transpired that day," says Max Parry, an independent US journalist. "Amid the delirium about the supposed 'insurrection' or 'sedition,' many people are not stopping to ask the important question, 'cui bono?' or who benefits from this narrative?"

While the DC incident has already been instrumentalised to impeach Donald Trump and possibly ban him from ever holding public office again, it appears that "the already panoptic surveillance state in the US" is also going to benefit from the unfolding situation by further curtailing the civil liberties of Americans, warns the journalist.

I've never been "MAGA-allied" -- never voted for Trump, criticized him throughout the entire ridiculous presidency -- but it's nonetheless easy to point out that CNN has engaged in a month's worth of purposely fear-inducing propagandistic manipulation on this topic https://t.co/YQbB24PoUF

​The newly proposed DTPA legislation seems to be an excessive measure given that since 9/11, "the US has already been transformed into a domestic police state where the privacy of law-abiding citizens is routinely violated" under the USA Patriot Act, according to Parry.

"Not to downplay any legitimate threats of extremist groups that are out there who may have even been among the crowd at Congress that day, but what took place at the Capitol hardly qualifies as an incident of 'terrorism' especially considering it is widely believed that the local police facilitated and even permitted the entry of the protesters into the building,", he says, adding that to paint "the entire crowd of Trump supporters with such a broad brush is also dangerous" given that 70-plus million people voted for the ex-president in November 2020. 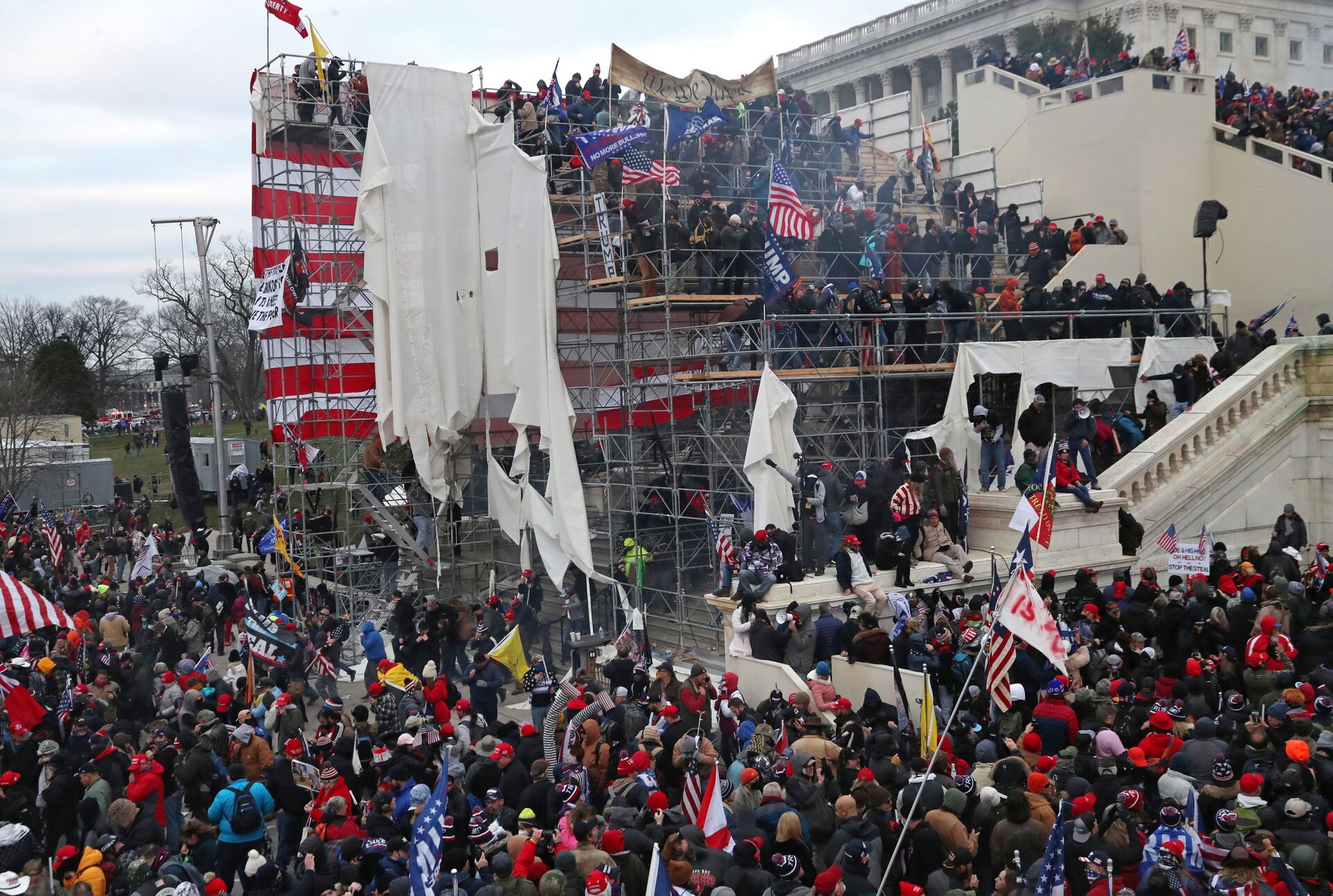 Last week NBC News suggested that President Joe Biden may face institutional, legal, and political hurdles while cracking down on "domestic terrorists." For instance, people cannot be spied upon for their political ideology or membership in certain groups. "The FBI can never initiate an investigation based solely on an individual's race, ethnicity, national origin, religion, or the exercise of First Amendment rights," the bureau told the media outlet in an official statement.

Biden spending more money protecting the Capitol from Americans than he is protecting the borders from illegal immigrants. #438Million #TaxpayerDollarsAtWork

​Thus, in September 2020, FBI Director Christopher Wray explained to Republican lawmakers that the bureau categorises Antifa rioters more of an ideology or "movement" than a group, prompting ire from Representative Dan Crenshaw (R., Texas) who expressed skepticism that "an ideology" could train its members, make shield wall phalanxes to attack federal officers, form an autonomous zone in an American city, and besiege a federal courthouse in another.

Yet another obstacle is that while federal law defines domestic terrorism, it doesn't make it a specific criminal offence, the news agency remarks, explaining that prosecutors usually charge the defendants under other statutes, such as murder, hate crimes, gun and gang laws, etc. A newly proposed DTPA legislation can "add teeth to domestic terrorism laws," according to the media outlet.

However, the Democratic-sponsored domestic terrorism bill would not target all sorts of domestic terrorists but just a specific breed – "white supremacists" and "neo-Nazis" while jihadists and the radical left, including Antifa, Black Lives Matter militants, remain "studiously unmentioned" in the Democrats’ proposal, according to Andrew McCarthy, former assistant United States attorney for the Southern District of New York. The attorney noted in his January op-ed that the Dems appears to be targeting "what they consider to be right-wing terrorism or, more specifically, Trump-inspired insurrectionists in the wake of the January 6 Capitol riot," arguing that the bill "is not about countering terrorism" but "about weaving a political narrative." To that end, the Democratic Party even tries to redefine the term "domestic terrorism" in its new law, although it is already codified by Section 2331(5) of the US criminal code, according to the lawyer. 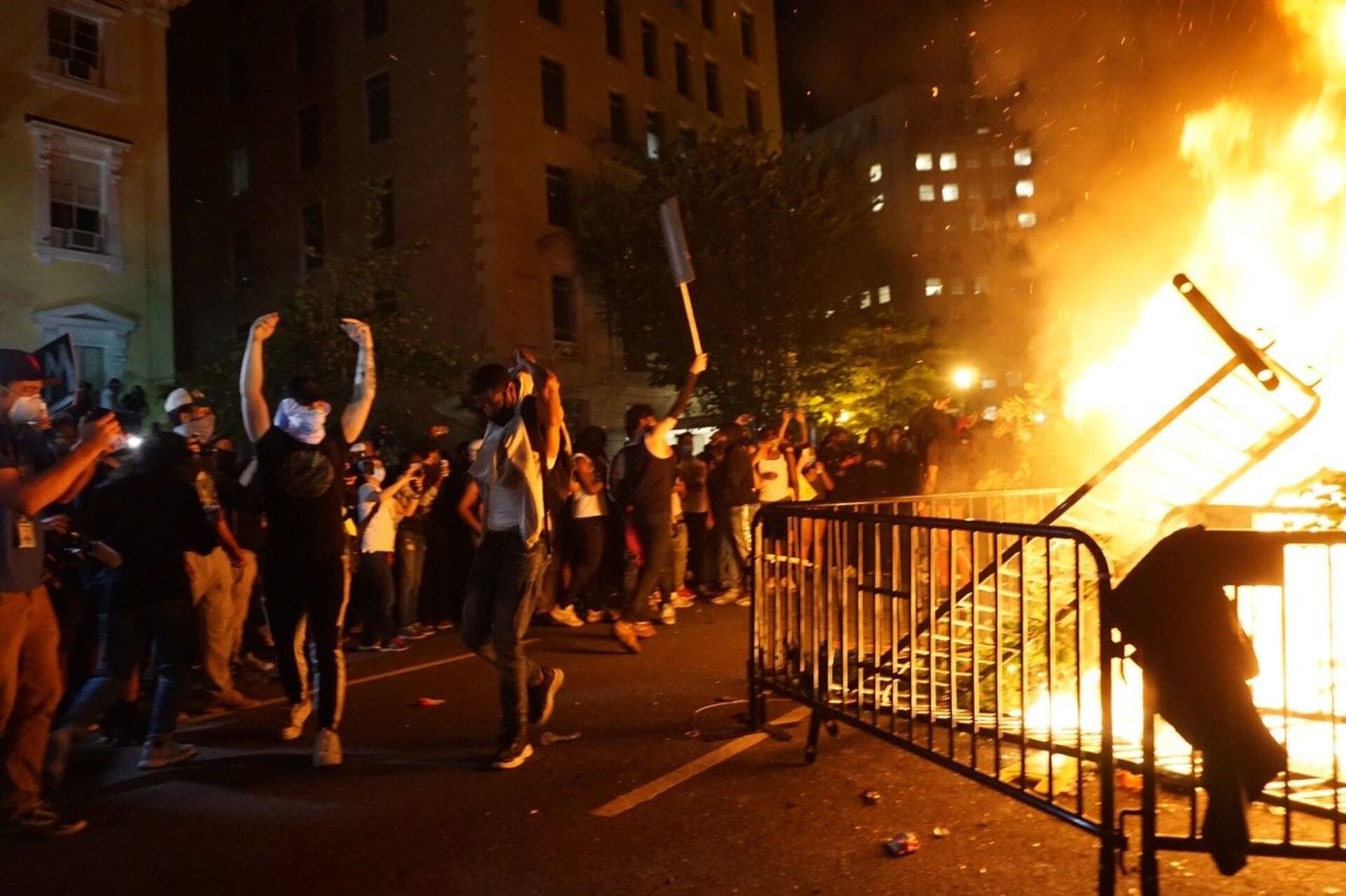 Not only BLM and Antifa militants were left beyond the scope of the Democratic-sponsored domestic terrorism legislation, the BLM movement was nominated for the 2021 Nobel peace prize. Norwegian MP Petter Eide, who promoted the movement, stated that it "ha[s] had a tremendous achievement in raising global awareness and consciousness about racial injustice," despite claiming the lives of at least 25 people during the summer protests, according to the Armed Conflict Location and Event Data project (ACLED). As the Guardian specified, the non-profit did not count dozens of deaths which occurred in the result of crimes "carried out in the vicinity of protests" but which could not be "directly related to the demonstrations themselves," according to the researchers.

"Obviously it's completely absurd that Black Lives Matter was nominated for a Nobel Peace Prize and it speaks to how politicised the award is," says Max Parry. "While one can certainly be sympathetic to the plight of black Americans at the hands of police brutality by law enforcement and the need for reform of the criminal justice system in the US which has the world's largest prison population and the highest rate of fatal police shootings of any country, these protests which started as demands to reform policing were quickly hijacked into a movement to elect Joe Biden, one of the very politicians who authored the 1994 Violent Crime and Law Enforcement Act which disproportionately targeted black Americans for incarceration."

While the FBI is investigating more than 400 subject cases in the aftermath of Capitol protests, violent Antifa and BLM marches continue to take place in a number of American cities.

At the #antifa riot at the Portland ICE facility overnight, they set a dumpster on fire & attempted to push it into the building. Federal officers came out to stop them. Antifa threw a mortar explosive at police. #PortlandRiots pic.twitter.com/KVMpAJ3LJ1

​American investigative journalist Andy Ngo has shed light on some BLM-Antifa attacks in Portland, Rochester, and Washington DC on Twitter, drawing attention to the fact that many rioters went unpunished. Thus, in Portland, District Attorney Mike Schmidt’s office has not prosecuted 91.56 percent of people arrested at protests since they began in May of 2020, according to KOIN 6 News records.

Violent crime & murders have been skyrocketing in Portland ever since @DAMikeSchmidt came into office. Schmidt decriminalized felony rioting for BLM-Antifa protesters & has dropped more than 91% of cases involving riot arrestees. #antifa https://t.co/ZLD0RlzK7u

​"As Portland, Seattle, and Denver remain under siege, the plan is to pretend that the last seven months of insurrectionist rioting never happened; or if it did, that it was the noble kind of insurrection", Andrew McCarthy wrote in his January op-ed, commenting on the matter.

ANTIFA is back on the streets of Washington DC causing mayhem.

Last night, they chanted "if we don’t get it, burn it down" as they confronted police officers.

ANTIFA is a domestic terrorist organization and should be declared as such. More to come on that!

​At the same time, it's dangerous to ramp up the climate "where phrases like 'treason' and 'coup' are being thrown around carelessly in order to ram through yet another dangerous and unconstitutional anti-terrorism bill" and classify Trump supporters as a domestic terrorism threat, when the majority ordinary Americans do not share the views of "religious extremists, white supremacists, [and] nativists," adds Parry.

"One can recognise that Trump may have emboldened some unfortunate elements without profiling his entire swath of support under such labels, especially when it will erode the rights and liberties of all Americans regardless of political affiliation", the journalist says. "The new administration cannot speak of 'unity' and then simultaneously pass such a dangerous piece of legislation".