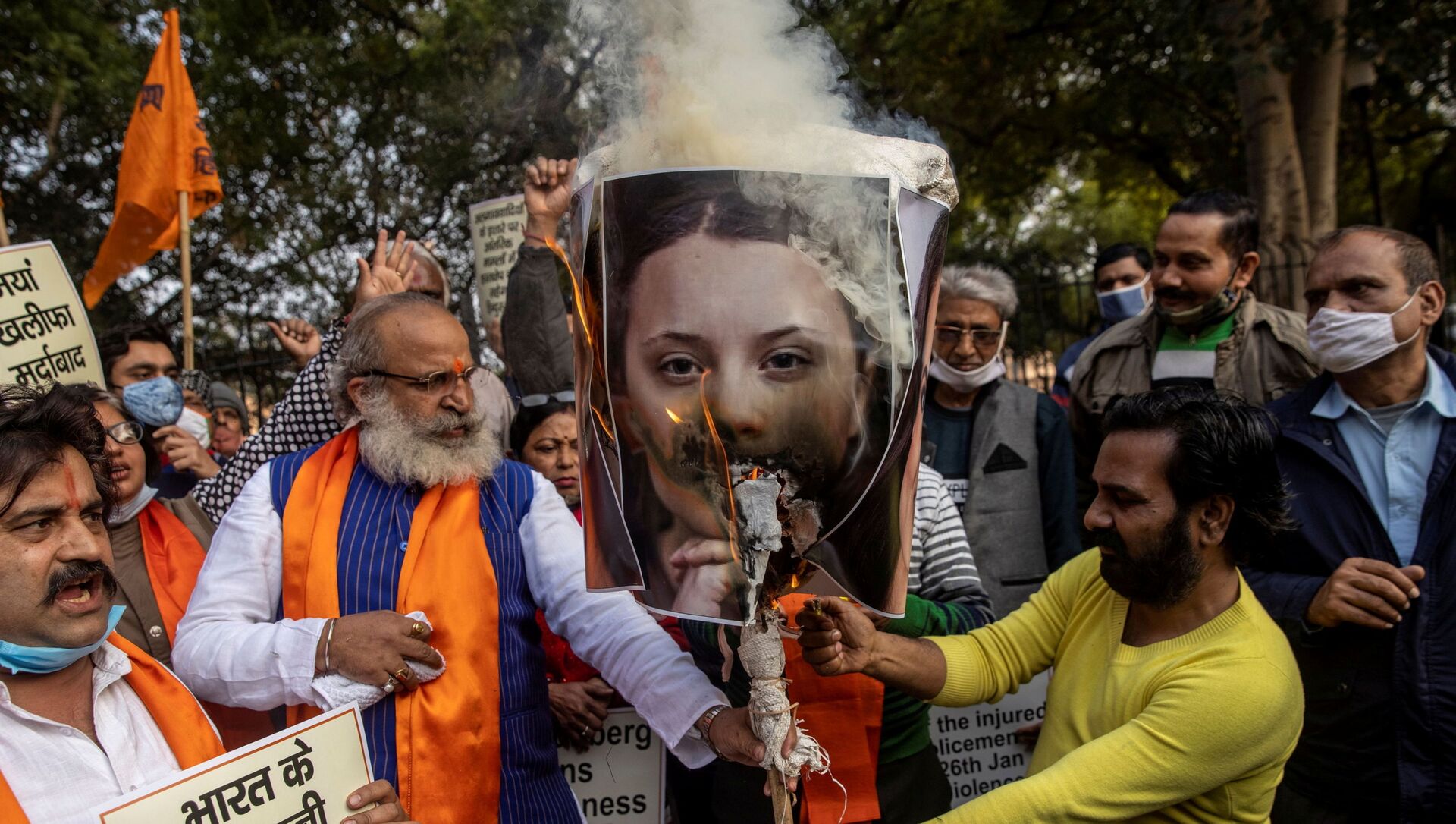 Igor Kuznetsov
All materials
The Swedish activist has inflamed strong feelings in India, not least by tweeting a toolkit with campaigning advice for farmers. By doing so, she was showered with allegations of being part of an international criminal conspiracy as the document she linked to became the target of a police investigation for sedition and conspiracy.

Angry crowds in Delhi have burned effigies of renowned Swedish environmental activist Greta Thunberg after she tweeted her support for the country's protesting farmers, prompting an investigation by Indian police.

In objection to several international celebrities, including Greta Thunberg and Rihanna, who voiced their support for the farmers and inflamed feelings in an already high-strung situation, counter-protesters set alight their portraits and held banners protesting "international interference".

Greta Thunberg's posters being burned in India after she tweeted in support of farmer protest. pic.twitter.com/23Duty18zD

​The Swedish activist, who recently turned 18, tweeted to her nearly 5 million followers a so-called toolkit for those willing to support the farmers, which included campaigning tips and advice on petitions. Following the series of tweets, Thunberg was showered with allegations of being part of an international criminal conspiracy and became the target of a police investigation.

​According to the Indian police, an initial probe suggested that the toolkit linked by Thunberg may have ties to a pro-Khalistan group, a movement that demands a separate country for Sikhs carved out of the northern Indian state of Punjab, located on the India-Pakistan border. In the words of Special Commissioner of Police Praveer Ranjan, the document has a plan to spread "social disharmony" in India. Meanwhile, a case has been registered under charges of sedition and conspiracy.

Leaders in the ruling Bharatiya Janata party (BJP) said the toolkit was tantamount to "evidence of international plans for attacks against India".

Rihanna, for her part, earlier tweeted an article on the violent aftermath of the farmers' protests, asking: "Why aren't we talking about this?!"

When the news of the police investigation broke, Thunberg reaffirmed her support. "I still #StandWithFarmers and support their peaceful protest. No amount of hate, threats or violations of human rights will ever change that", she tweeted.

​Over recent months, the ongoing farmers' protests have become a highly divisive issue in India. Since November, farmers have been demanding the repeal of a series of agricultural laws passed by the nation's parliament. Hopes of a resolution seem rather remote at the moment, as the demonstrations took a violent turn in late January. So far, nine rounds of negotiations between the government and farmers have failed to bear fruit.