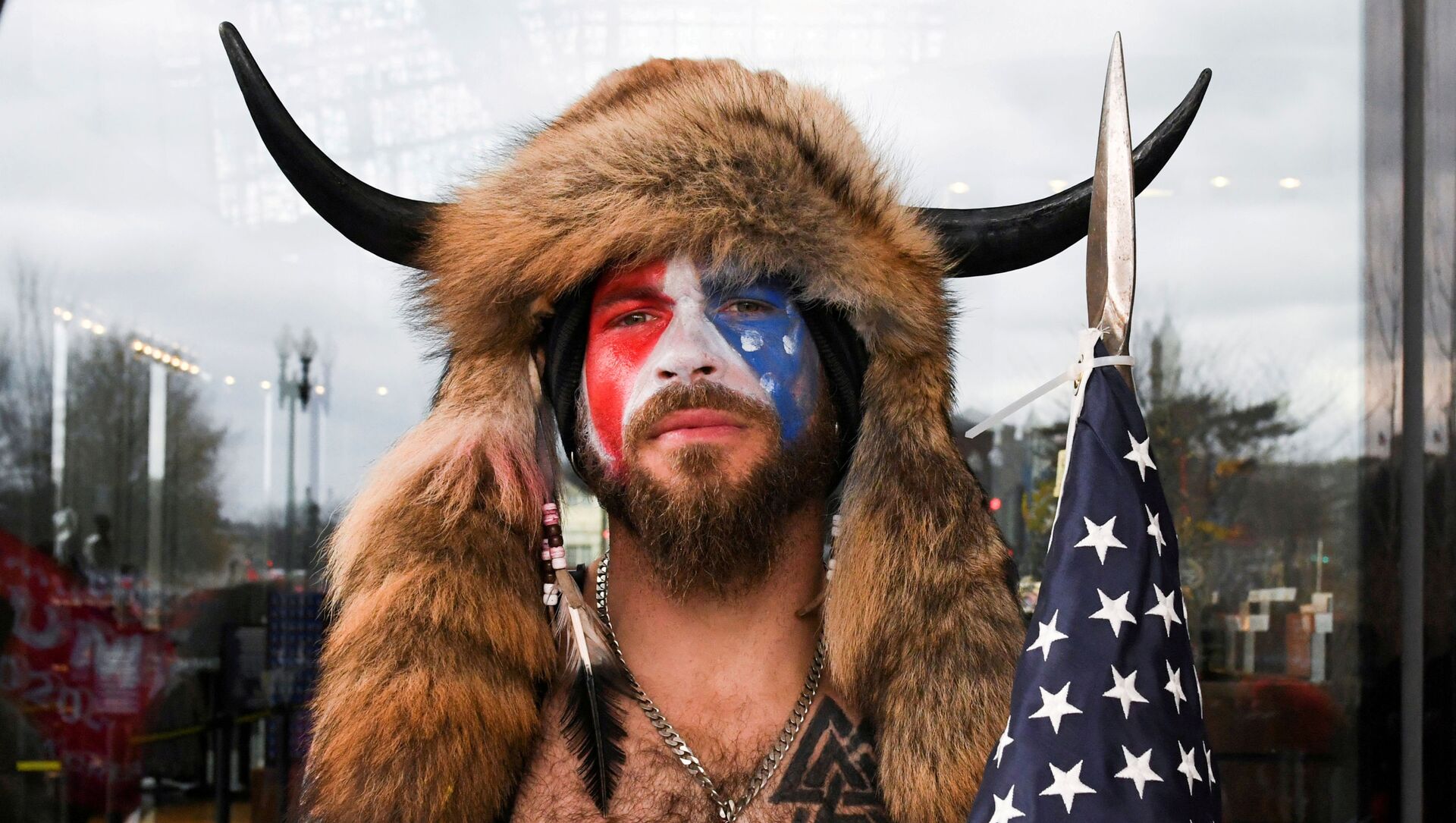 © REUTERS / STEPHANIE KEITH
Subscribe
Gaby Arancibia
All materialsWrite to the author
Jacob Chansley, a 33-year-old resident of Arizona, is one of many infamous rioters who stormed the Capitol during the January 6 insurrection. He has been charged with multiple offenses and detained over concerns he may encourage new acts against the Biden administration.

A federal judge ordered a Washington, DC, jail on Wednesday to provide Chansley with organic food after the infamous rioter went on a hunger strike for over a week after the facility failed to adhere to his shamanic diet.

The order came down after Chansley's lawyer, Al Watkins, submitted an emergency motion that indicated his client was wasting away because organic meals were not being supplied to him by the detention facility.

During a hearing over the motion, lawyers for the District of Columbia jail explained that an initial request for organic food had been rejected because they found no evidence that an organic diet was a "tenent" of Shamanism, the St. Louis Post-Dispatch reported. Officials also indicated that they had not been made aware of Chansley's dietary restrictions beforehand.

Ultimately, US District Judge Royce C. Lamberth deferred to an earlier decision that was made by an Arizona judge who allowed Chansley to be provided with his specified diet. The so-called shaman was initially taken into police custody in early January. 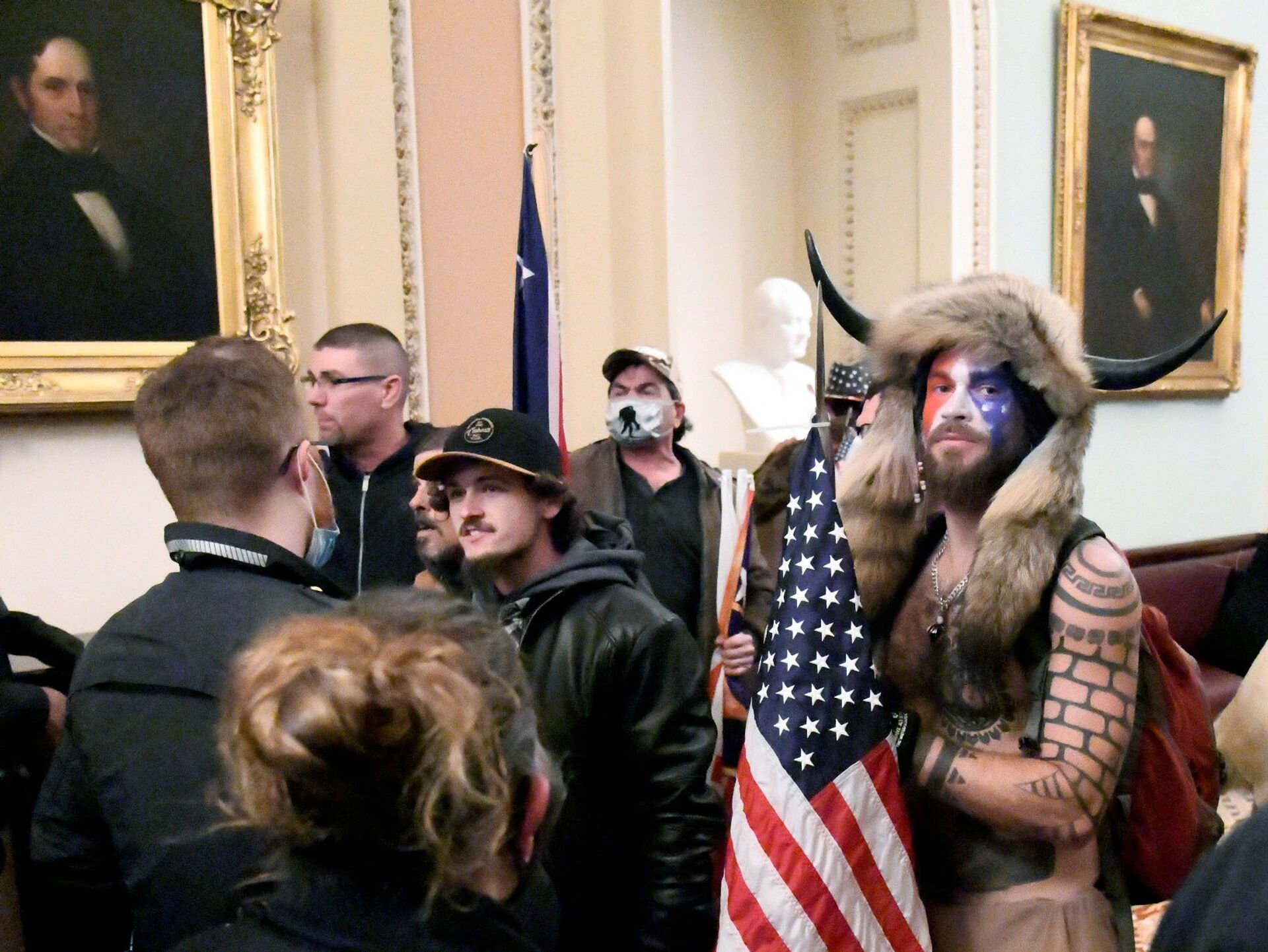 Jacob Anthony Chansley, also known as Jake Angeli, of Arizona, stands with other supporters of U.S. President Donald Trump as they demonstrate on the second floor of the U.S. Capitol near the entrance to the Senate after breaching security defenses, in Washington, U.S., January 6, 2021.
© REUTERS / MIKE THEILER

In the Wednesday-filed motion, Watkins noted that Chansley, otherwise known as the horn-toting "QAnon Shaman," reportedly lost more than 20 pounds in the span of several days, as he refused to consume the food that was provided by the jail.

Watkins argued in the filing that Chansley was an actual shaman, and that as part of his religious beliefs, he does not eat non-organic foods. Consuming non-organic food, according to Watkins filing, "would act as an 'object intrusion' onto his body and cause serious illness if he were to eat it."

He further explained that "in shamanic traditions, the body, mind and soul are interconnected, and the well-being of all three are necessary for my client to be able to practice his faith."

The filing also included an inmate request in which Chansley wrote to the District of Columbia Department of Corrections that he required organic meals, and that he'd been eating such food for the past eight years.

"I have strayed from my spiritual diet only a few times over the last 8 years with detrimental physical effects," Chansley wrote. "As a spiritual man I am willing to suffer for my beliefs, hold to my convictions, and [feel] the weight of their consequences."

The latest development surrounding the horn-toting shaman came after he pleaded not guilty on Friday to charges that stemmed from his involvement in the Capitol siege. Chansley has been hit with charges including civil disorder, obstruction of an official proceeding and entering and remaining in a restricted building, among other violations.

000000
Popular comments
Qanon shaman can be in video games as a bad guy or a playable character. He can be in wrestling and fighting games. One of his special abilities can be loud shaman chanting and in fighting games his staff and flag can be used as weapons to take down an opponent. His power grows, his health bar is repaired, and special energy restored when he consumes organic food. His weakness is junk food. His phrase can be "Trust the plan". When his special power bar is full he can call on assistance from the proud boys for 15seconds.

FeEisi
4 February, 05:27 GMT
000000
They treat their domestic terrorists Well. And Isis will have organic Chicken on the menu