'The SNP is Facing Its Most Internal Dissention and Rift Since Early 1980s', Professor Says 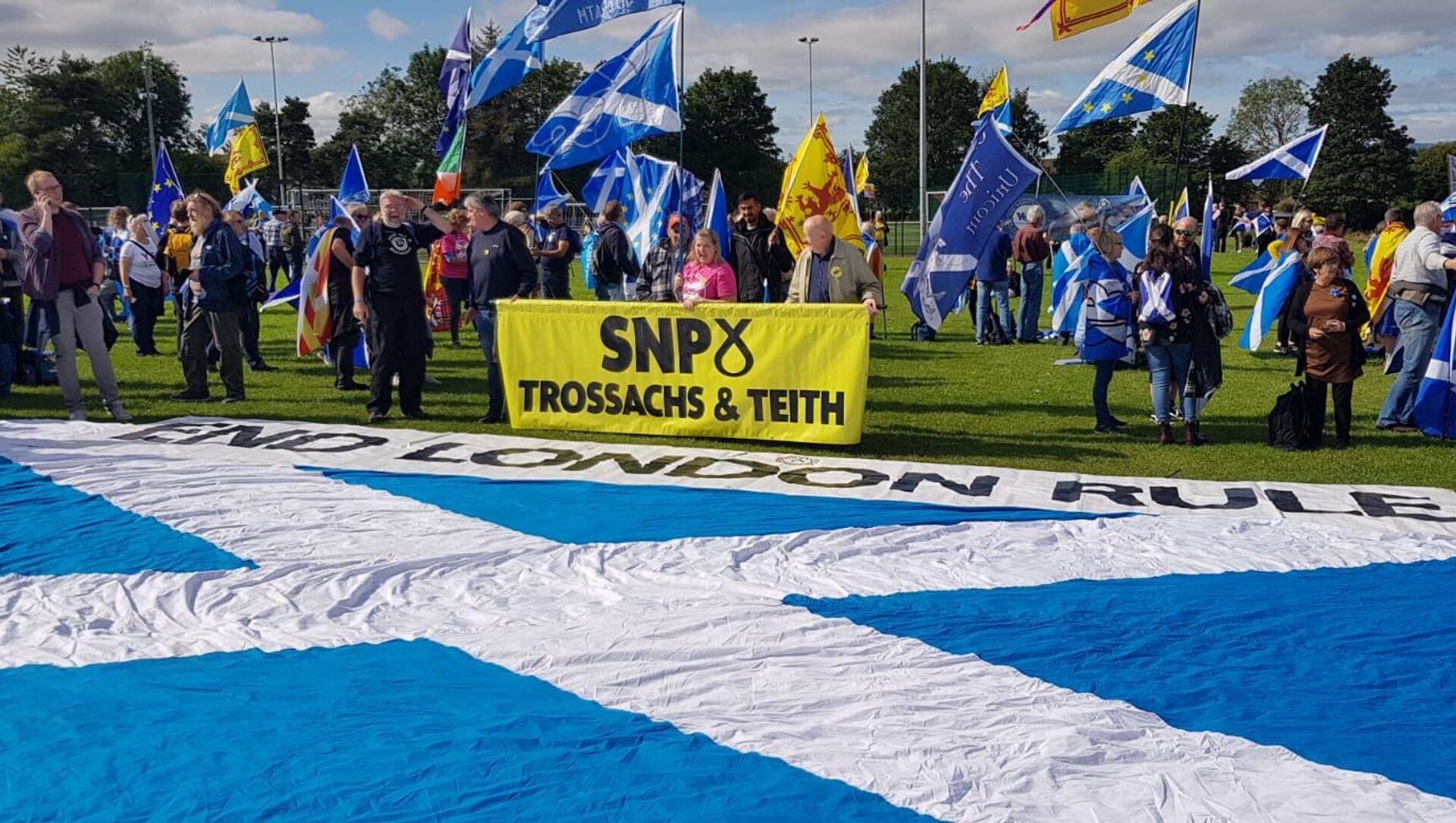 © Sputnik / Alex South
Subscribe
Last week, top Scottish National Party (SNP) MP, Joanna Cherry, was sacked from the party's front bench in Westminster. Cherry took to Twitter to announce that she has been removed and urged the SNP to rethink their policy radically.

Sir John Curtice, Professor of Politics at Strathclyde University and President of the British Polling Council

Sputnik: Joanna Cherry has been one of the SNP's most prominent members, occupying a key position in the party's Westminster team. What has led to such an abrupt downfall?

John Curtice: I think what's going on here is a disagreement between Ms Cherry, who is undoubtedly one of the most talented of the SNP MPs at Westminster, but also somebody who by reputation at least is not always the easiest of people to get on with. There are a number of lines of disagreement. One is about whether or not the SNP should be saying more about what it would do if the UK prime minister were to deny the SNP the authority to hold a Scottish independence referendum, assuming the SNP wins the election in May. She is also relatively sympathetic, it seems, to Alex Salmond in his claims that there was a conspiracy to try to bring him down politically, which led to the various allegations of sexual indiscretion, which, of course, for which he ended up being acquitted in court. And she's also on the side of an argument that's going on quite intensely inside the SNP about whether or not people should be allowed to change their gender by choice as opposed to requiring some kind of medical diagnosis of gender dysphoria. There's a whole set of fault lines here, partly personal, partly political. It seems that the dispute is not just simply between Ms Cherry and Nicola Sturgeon, the party leader and Scottish first minister, but also actually within the Westminster group for the SNP and that as it were some of the MPs inside that group have reached a point where they were saying, well, to be honest, we find it difficult to work with her. And obviously, none of us knows outside whether that's right or wrong, but that certainly seems a part of the story. So, yes, in part, this may be a move and it wouldn't be the first one to try to cut Joanna Cherry down to size. She was denied the chance effectively of being able to stand for the Scottish parliament election in May. But I think we perhaps should also be aware that maybe it's not just simply a dispute between Nicola Sturgeon and Joanna Cherry, but also perhaps between Joanna Cherry and some of her colleagues in the Westminster group.

Sputnik: Do you expect further dismissals? Who might be under the gun?

John Curtice: I mean, what is certainly true is that the three MPs who are known to be most sympathetic to Alex Salmond are the three MPs and the only three MPs in the SNP group who are currently not being given role as spokesmen for one subject or the other. One of those others is Kenny MacAskill, who has long been critical of Nicola Sturgeon's stance on the Indyref. But there's a limit to the extent to which Nicola Sturgeon can necessarily purge. I mean, it so happens that in internal SNP elections that took place last autumn, Joanna Cherry herself got elected to the principal party ruling body, as did a majority of people who are thought to be sympathetic to her position.

A continuing power struggle may be more appropriate, but of course, much will now hinge on two things. One, on the fact that the parliamentary inquiry into the way in which the Scottish government treated disciplinary proceedings against Alex Salmond, disciplinary proceedings, which were eventually thrown out by the court; how that ends up and Mr Salmond is now going to appear next week and Ms Sturgeon the following week. That's pretty important to the reputation of both politicians and how things, therefore, fall out on that fault line. And secondly, assuming Ms Sturgeon does survive all of this, if she does indeed deliver an overall majority in the Scottish parliamentary election in May, inevitably her position is going to be strengthened vis-a-vis those who are unhappy about some of her stances, so much probably does now depend on a train of events that's probably going to keep Scotland quite interested in what's going in the SNP for quite a while.

Sputnik: How might the so-called "SNP Civil War" impact the upcoming Holyrood elections in May?

John Curtice: It's long been the case, that it's clear that the biggest risk that Nicola Sturgeon and the SNP seem to face, vis-a-vis these May elections is not really their political opponents, who, for the most part, have struggled to land much of a blow on the SNP during the course of the last 12 months, but rather the internal tensions and disputes within the party, including not least the fact that it's perfectly clear that the relationship between Ms Sturgeon and her predecessor, Alex Salmond, has indeed completely fallen apart. And one of the ironies of the situation we face is that when the SNP look to potentially be closer to delivering that aim of independence than the party ever has been since its foundation in the 1930s, it is actually certainly facing its most internal dissension and rift since the early 1980s, which was an occasion when Alex Salmond got thrown out of the party. So, I think there is no doubt that Ms Sturgeon does need to negotiate the next few weeks successfully vis-a-vis the parliamentary inquiry. There's also an inquiry about whether or not she's broken the ministerial code. She does need to negotiate that successfully. But against all of this, we need to bear in mind that we are talking about a situation in which the Scottish public are, for the most part, focused on the issue of coronavirus and the handling of the pandemic and how that has been handled, under which inevitably the Scottish government is continually under scrutiny. That's probably going to be more important, I suspect, in the end to most voters, rather than an internal dispute about that probably for most people in Scotland it will seem like an internal party squabble. But certainly, the lid needs to be kept on that squabble so that voters don't start to become concerned about the ability of the party to provide effective government.

Sputnik: What kind of ramifications will the intra-SNP split have on the new Scottish independence referendum?

John Curtice: It's already had some implications in the sense that it's been clear that Nicola Sturgeon's position on holding another referendum has been that we want to win the election in May. And in the wake of winning that election, we want the UK government to grant the authority that was given in advance of the 2014 referendum, which provided the legal basis for that referendum. So she wants to do a rerun of the 2014 referendum and she doesn't really want to say much more than that. However, Joanna Cherry has been amongst those who said, no, we need to make it clear what our Plan B would be if Boris Johnson says that I'm not willing to give you such a referendum. I think in part as a result of the fact that there is a substantial body of people on the SNP's ruling body that back Joanna Cherry's position. On the weekend before last, the constitutional secretary in Scotland, Mike Russell, did give an indication that indeed, if the UK government were to refuse to give the legal authority to hold a referendum of the kind that was held in 2014, that the Scottish government and parliament would seek to hold a referendum anyway. Now, in terms of many of us who follow this, I don't think that was much of a surprise. And we know from work done by the Scottish government more than a decade ago, a way in which that might be possible and the constitutional and legal arguments that surround any such a move. But certainly, Mr Russell seemed keen to promote the idea that indeed there was a Plan B and gave some indication of what it might be. So to that extent, at least, the internal tension has already to some degree perhaps required Nicola Sturgeon to say rather more about what the Scottish government might do in the wake of a refusal by the UK government than perhaps she might otherwise have done. But that’s as far as it goes and again, of course, so far as attitudes towards independence is concerned, a) it’s the coronavirus and b) is Brexit – are the issues that are particularly driving attitudes towards this. And unless attitudes towards the Scottish government's handling of the pandemic and attitudes towards Brexit change, then the small majority in favour of independence that currently exists is unlikely to disappear.