Britain's COVID-19 Furlough Scheme: How Much and for How Long? 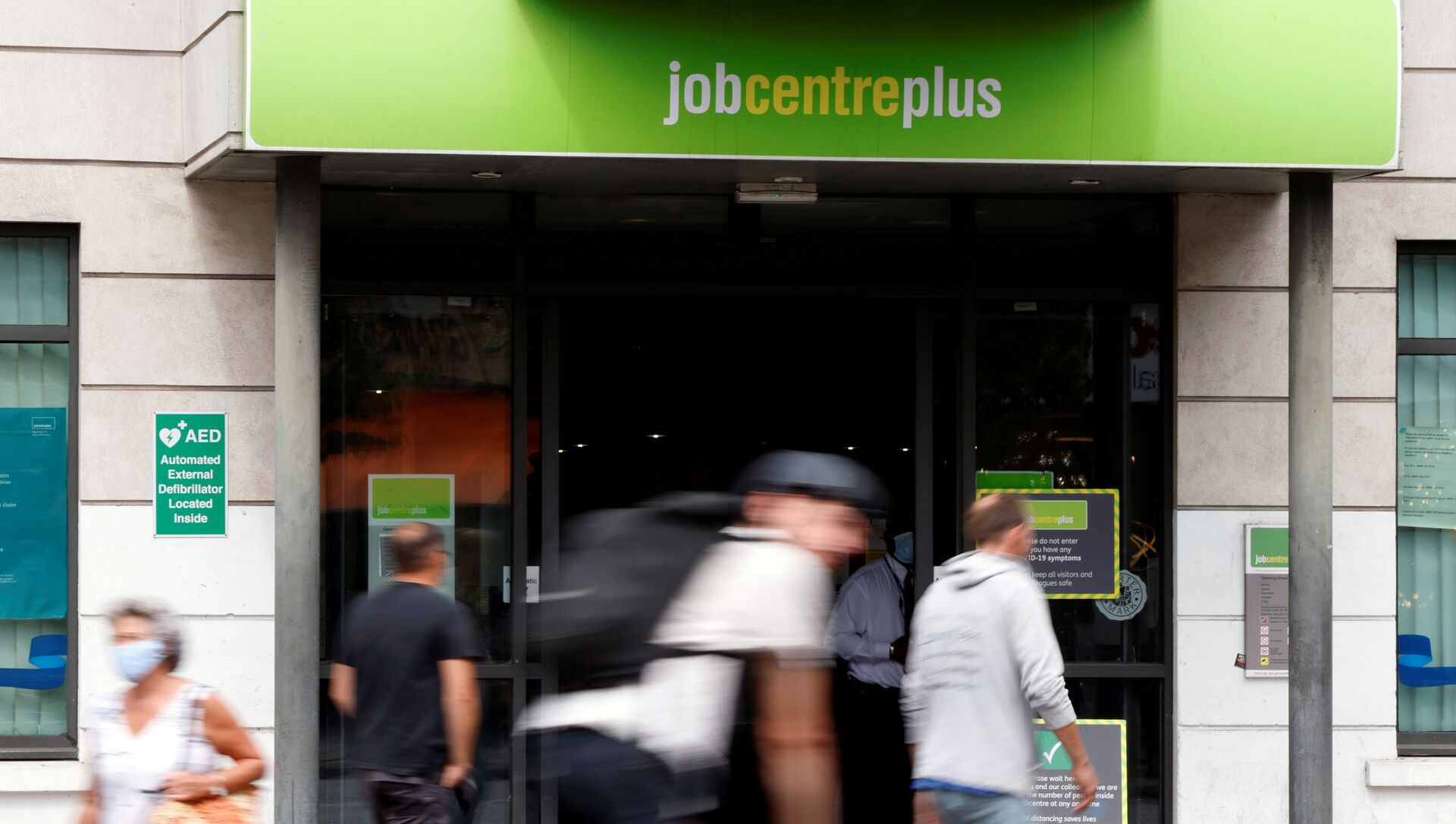 James Tweedie
All materialsWrite to the author
With the UK's coronavirus 'furlough' payment scheme set to end on April 1, trade union and business leaders are united in their calls to extend it even further. But can Chancellor Rishi Sunak keep spending like there's no tomorrow?

The UK's furlough scheme has already cost the treasury nearly £50 billion — and there is still no clear end-date for the lockdown that has put the British economy in a deep-freeze.

The expiry date of the government's Coronavirus Job Retention Scheme, better known as the furlough, has already been pushed forward to April 1 this year. That followed a previous extension in May and the cancellation of its planned replacement, announced in late September but cancelled just three weeks later as the UK headed into the pre-Christmas lockdown.

An end to the series of restrictive measures in response to the deadly virus is at last in sight, thanks to the rapid roll-out of coronavirus vaccines. But despite encouraging signs of falling infection rates and hospital admissions remaining manageable, the exact timeframe for the long-hoped-for spring re-emergence remains uncertain.

Prime Minister Boris Johnson reiterated on Wednesday that schools would stay closed to most pupils until Match 8 as planned, despite the rapid fall in the number of new infections and the number of the most-vulnerable people immunised passing the 10-million mark on Tuesday. Johnson said no decisions could be taken for another fortnight, as there was not yet enough data available on the effect of vaccinations on infections.

Meanwhile, the furlough scheme and other aid packages and tax rebates have added up to a national deficit of some £340 billion.

Employers can apply for funds to pay up to 80 per cent of wages to staff for any of their normal weekly hours that have been cut due to lockdown restrictions.

But the government leaves it up to firms to decide whether to "top up" those furlough wages to 100 per cent of what workers have lost. It also puts a cap of £2,500 per month per employee on the subsidy — adding up to just under the roughly £31,500 median UK annual salary in 2020.

Companies are also disadvantaged, as the furlough payments do not cover the National Insurance social security tax contributions they have to pay, nor their statutory employee pension contributions.

On the plus side, the extended scheme covers agency workers, those on zero-hours contracts and apprentices. It also allows employers to apply for staff who cannot work because they are "shielding" due to being in a high-risk group, looking after children — with schools closed to all but the kids of key workers — or caring for a vulnerable at home.

But with the scheme currently supporting 4.5 million jobs in the UK, the alternatives are difficult to contemplate. Food banks, founded during the 'credit crunch' banking crisis and ensuing global recession, have reported a jump in demand.

Trades Union Congress (TUC) General Secretary Frances O'Grady urged Sunak on Wednesday to immediately announce a further extension to the scheme until the end of the year, and not to wait for his March 3 budget statement.

Not doing so “would be a dereliction of duty of any government," said O'Grady. "Nobody should think it is responsible or acceptable for any government to consign people to the dole queues.”

She raised the spectre of a return to the joblessness levels of the 1980s, when 3 million people were claiming benefits. Unemployment hit a four-year high of 1.7 million in figures released last month.

"The government must understand we need to work our way back to growth, and for that we need people in jobs," the TUC leader added. "Otherwise we are going to end up with real, deep economic and social problems."

The Confederation of British Industry (CBI), which represents big business, warned that its members would retrench workers without an imminent decision to extend the furlough. “If the government brought it to a sudden stop, that would almost certainly impact job decisions, just as we see hope on the horizon,” CBI chief economist Rain Newton-Smith said.

British Chambers of Commerce (BCC) director-general Adam Marshall called for a shorter extension until July, warning that the anticipated end of the current, third coronavirus lockdown would not spell the end of his 75,000 members' woes.

“What one can’t do is say that once the vaccine rollout has happened, everything will be OK. That is not the case," Marshall said. "You’ve got businesses in deep trouble, and still the possibility of flare ups in the virus. It’s not a case of just vaccinate and forget about it.”

The chancellor is under competing pressures to cut the national deficit while saving businesses — from the sole traders to multinational corporations — from going under and protecting individual workers' jobs.

The British media has been rife with speculation of a sharp rise in corporation tax from its current record low of 19 per cent to fill the budgetary black hole — while keeping the government's promise of a "triple-lock" on National Insurance and inheritance tax and VAT, the latter already a whopping 20 per cent.

That could prove popular, as a recent poll for the Sunday Times showed only 21 per cent of voters back the alternative of cutting public services. Almost 90 per cent wanted the government to honour its pledge to "level up" neglected regions rather than concentrating the economy in London and other metroplexes, while more than eight out of ten thought workers deserved a pay rise.

But will Rishi really turn revolutionary red? Sunak has previously signalled that the treasury's pockets are not bottomless, and he is ready to call time on the furlough.

His latest extension of the furlough scheme in October postponed its planned replacement, the Job Support Scheme. The chancellor had warned the new system was only to support "viable" jobs, not those that would be permanently lost past the end of the pandemic.

One of its conditions was that staff had to work at least 20 per cent of their normal hours, with the government paying up to 61.67 per cent of hours not worked up to a cap of £1,541.75 per month. Employers faced a requirement to top up that amount by at least 5 per cent. The Labour Party opposition criticised the plan as an incentive for redundancies, arguing it made it cheaper to keep fewer employees working longer hours on the payroll.

The answer to the conundrum may be to pour public money into creating new jobs, not saving old ones, according to veteran City of London economist Michael Roberts.

"Governments need to take the lead and not rely on the private sector to engender recovery," Roberts said in an interview this week. "The private sector is suffering from low profitability and even risk of bankruptcies in a sizeable section. Governments must apply direct investment in the economy such as infrastructure spending, reviving public health and education systems."

Boris Johnson: UK to Take All Necessary Measures to Guarantee Effective Trade Flow with N. Ireland
Roberts argues that the US is in a better position to rebound from the COVID slump, as its stimulus funding has been far more focused on business. But he has also warned against 'Modern Monetary Theory' (MMT) — AKA Quantitative Easing — a euphemism for rich economies using their fiat currency power to simply 'print' trillions for public spending or credit, regardless of what bullion reserves their central banks have to back it up.

The economist cautions that money pumped into the economy "may end up being 'hoarded' because people cannot spend and businesses cannot produce. But once businesses re-emerge and people start spending, then inflation may return. It depends on whether the money boost is spent on productive activities, namely creating new value."

With the government making endless — if ultimately popular — U-turns in its response to the pandemic, anything is possible. But the whizz-kid Afro-Asian chancellor could be wise to keep his powder dry for the March budget showcase.