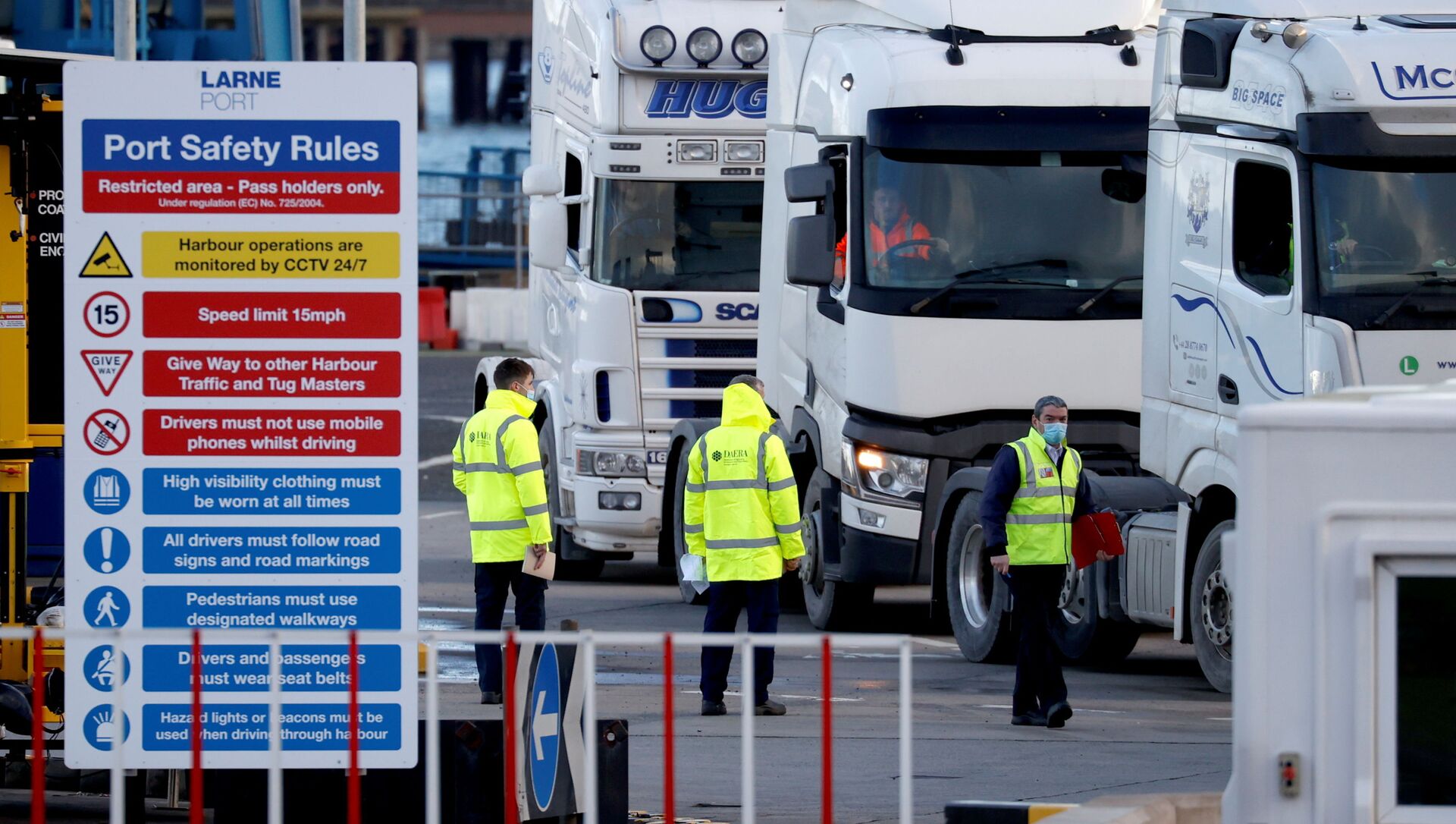 © REUTERS / PHIL NOBLE
Subscribe
Svetlana Ekimenko
All materialsWrite to the author
Police had earlier launched an investigation into graffiti opposing the post-Brexit Irish Sea border that was painted in some loyalist areas of Northern Ireland in recent days. Direct threats were also reportedly made against former prime minister and head of the government of the Republic of Ireland Leo Varadkar if he "set foot in Ulster".

After regulatory Brexit animal-based food checks at the Belfast and Larne ports were suspended on Monday amid cited safety concerns, police have announced upcoming talks between force officials and partner agencies to discuss the unfolding challenges.

"The safety of staff working at points of entry is of the utmost importance to us. Where we have any credible information we will share that with our partners and take appropriate action", PSNI Assistant Chief Constable Mark McEwan was quoted as saying.

He added that boosted patrols were in place at Larne Port and other points of entry, to "reassure staff and the local community".

On 1 February, Northern Ireland's Department of Agriculture, Environment, and Rural Affairs (Daera) announced it had decided "in the interests of the well-being of staff to temporarily suspend physical inspections of products of animal origin at Larne and Belfast" pending further discussions with the PSNI.

A Daera spokesman was cited by the Belfast Telegraph as saying:

"The situation will be kept under review and in the meantime full documentary checks will continue to be carried out as usual".

According to Democratic Unionist Party (DUP) Agriculture Minister Edwin Poots, the decision to withdraw personnel at the ports was taken after twelve Mid and East Antrim Borough Council officials from Daera and the UK Border Force, assisting with checks at the Larne Port, were withdrawn from their duties on Monday.

In consultation with my staff I have decided to withdraw staff from Belfast and Larne ports tonight.
There safety remains paramount.
I have spoke to HMG Ministers and outlined the issues of concern.
I welcome the support of my party leader in making such a significant decision

​As the volatile situation in the area had caused "extreme distress and worry to staff", officials said they had "no option but to withdraw them from their duties in order to fulfill its duty of care and carry out a full risk assessment with the PSNI, Food Standards Agency, and Daera".

The official moves to "protect staff" were triggered by an "upsurge in sinister and menacing behaviour in recent weeks".

​Last month, reports surfaced that disturbing graffiti had appeared in the area, alluding to tensions about the Northern Ireland Protocol and referring to port staff as "targets". Furthermore, it is understood that concerns were raised after individuals were spotted taking down number plate details.

"We have seen what I would describe as deeply troubling graffiti and a very notable upping of community tensions towards the NI Protocol, particularly in recent days. The health and well-being of our staff is always this council's number one priority and that is why the decision has been taken to withdraw them from their work at the port with immediate effect until we have very real assurances and full confidence that they can go about their duties without fear, threat, or concern for their well-being", said Mid and East Antrim Mayor Peter Johnston.

"I think it is utterly reprehensible that anyone who is going to their place of work should be threatened in this way", she said on UTV.

In Belfast, a raft of new post-Brexit checks on goods arriving at ports from Great Britain, introduced at the start of the year, had generated anger at the NI protocol, said the police.

Border Control Posts (BCPs) were erected at Larne harbour, and two other facilities in NI because after the end of the Brexit transition on 1 January 2021, Northern Ireland remained in the single market for goods. Accordingly, some products entering Northern Ireland from the UK must be checked upon entry.

Discontent in loyalist communities was reportedly "growing" over the Northern Ireland Protocol, designed to allow the country to follow the EU's customs rules as it has resulted in "red tape" delays at ports elsewhere, due to new declarations and checks. 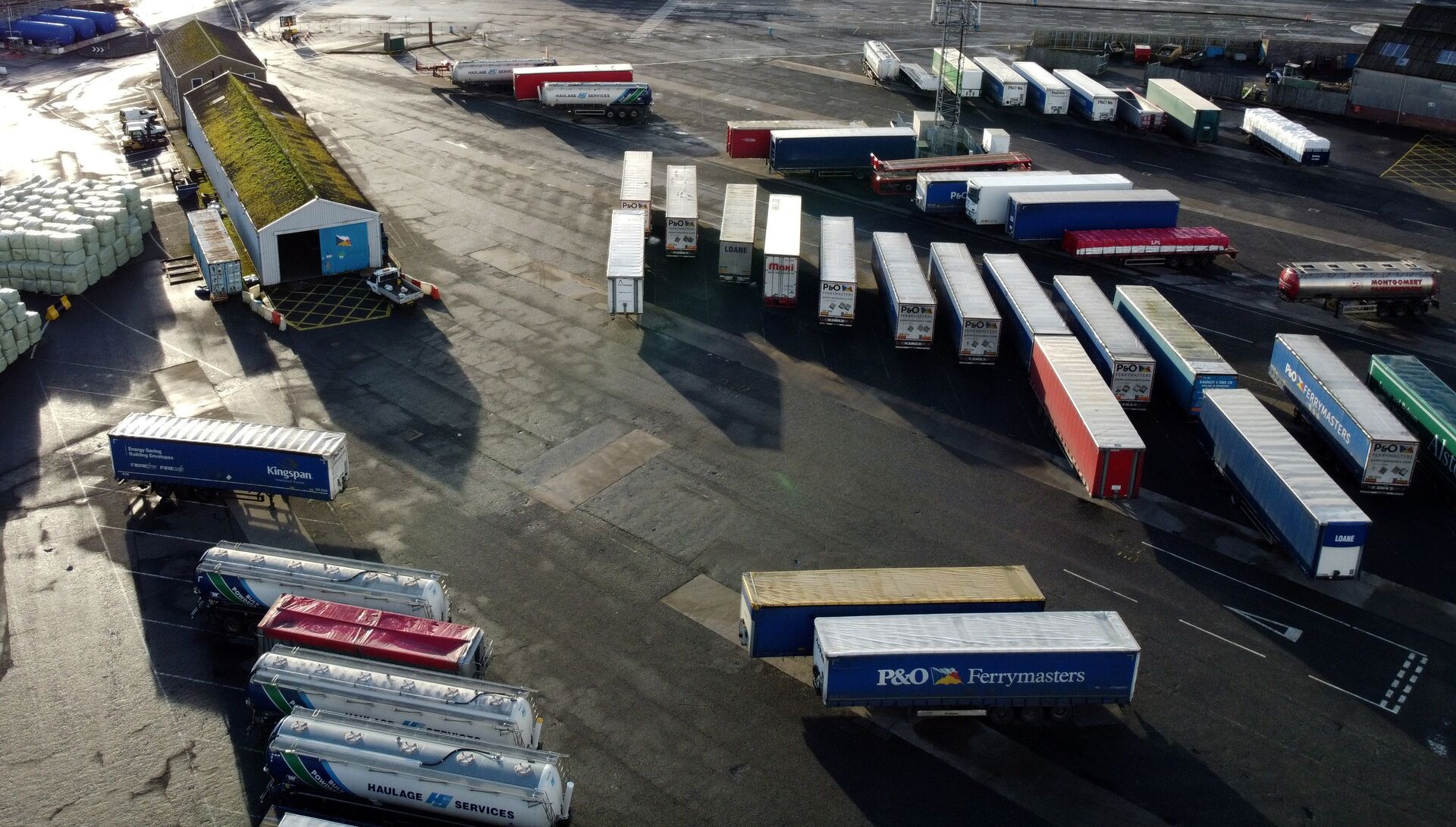 The current post-Brexit hassle at the border has resulted in a surge of Irish freight volumes to and from European Union ports in January, the government of the Republic of Ireland said on Monday.

Traders are said to be skirting the speedier route to the continent through Britain to avoid delays, resulting in volumes plunging 50 percent on routes between Ireland and Britain in January, the government said.

A diplomatic source was quoted by The Guardian as deploring the fact that unforeseen consequences of the NI protocol were stoking tensions.

"Where is the flexibility and the creative solutions that the EU called for during the Brexit negotiations? Every day there are new twists and complications and these are touching the notions of identity and sovereignty, which are hugely sensitive were the cause of past conflicts", the source said.