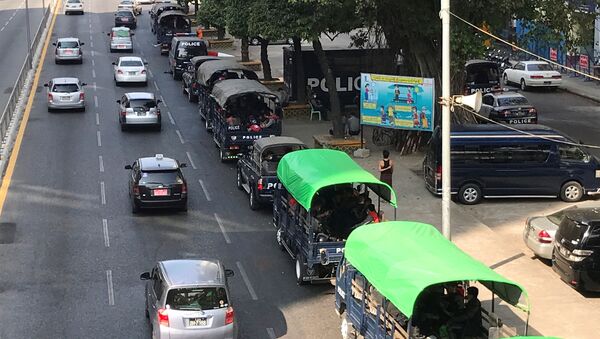 State Counsellor Aung Suu Kyi and other top politicians were detained in the early hours of Monday, with Myanmar's military declaring a one-year state of emergency after weeks of escalating tensions over allegations of vote-rigging in the November election.

In a Facebook statement, the executive committee of the National League for Democracy (NLD) in Myanmar has called for the release of Aung San Suu Kyi, ousted President Win Myint, and others "as soon as possible".

Dozens of foreign countries have issued statements condemning the coup and calling on the military to release all detained government officials and lawmakers.

Suu Kyi's National League for Democracy emerged victorious in Myanmar's 8 November election, the second since the end of military rule in the country in 2011. Myanmar's military has accused the government of conducting the recent election fraudulently and vowed last week to "take action".

US Senate Republican Leader Mitch McConnell on Tuesday said he talked to President Joe Biden and Secretary of State Antony Blinken about the need for a response to the Myanmar coup, adding that he expects the United States to immediately impose sanctions against Myanmar's military leaders.

"I've had good conversations with @POTUS [Biden] and @SecBlinken about the need for a swift and decisive response from the US and allies following the coup in Burma. Expect the Administration will quickly sanction the junta and defense democracy," McConnell said via Twitter.

Myanmar's military launched the coup on Monday morning placing State Counselor Aung San Suu Kyi, President Win Myint and other senior members of National League for Democracy (NLD) in jail. The military announced a one-year state of emergency in the country, vowing to "take action" against alleged voter fraud during the November 8 general election, which saw Suu Kyi’s NLD party win resoundingly. The military said it was committed to the democratic system and vowed to hold new and fair elections when the state of emergency ends.

"This morning, the Security Council held close consultations on Myanmar. In her briefing to Council members, the Secretary-General’s Special Envoy Christina Schraner Burgener strongly condemned the recent steps taken by the military," Dujarric said. "The Special Envoy said… this turn of events was surprising and shocking. She said she'd been in contact with the military leadership as recently as one day before the takeover."

The military announced a one-year state of emergency and vowed to "take action" against alleged voter fraud during the November 8 general election. Suu Kyi’s NLD party won the election.

Schraner Burgener called for the immediate release of the detained officials and said the emergency declaration should be revoked.

"The declaration should be repealed, the detained leaders should be released immediately, and the post-election litigation process should resume with full commitment from all sides," she said.

Schraner Burgener also said the suspension of all flights, including UN relief flights, is particularly worrying given the ongoing COVID-19 pandemic and the implications this could have on the delivery of vaccines to Myanmar.

All actors must refrain from violence and the UN Security Council must send a "clear signal" warning against a "full backsliding" since Myanmar’s opening in 2011, she added.

Myanmar’s military on Tuesday announced the creation of a State Administrative Council that will take on government functions during the one-year state of emergency, the media reported.

According to the Myanmar Times newspaper, the 11-member council is headed by Commander-in-Chief of Defense Services Senior Gen. Min Aung Hlaing.

The council was created in line with the 419th section of the 2008 constitution that envisions that the head of the military, to whom sovereign power is transferred, has the right to exercise legislative, executive and judicial powers himself or via a specially created governing body.

Myanmar's military launched the coup on Monday morning placing State Counselor Aung San Suu Kyi, President Win Myint and other senior members of National League for Democracy (NLD) in jail. The military announced a one-year state of emergency in the country, vowing to "take action" against alleged voter fraud during the November 8 general election, which saw Suu Kyi’s NLD party win resoundingly. The military said it was committed to the democratic system and vowed to hold new and fair elections when the state of emergency ends.

Global leaders overwhelmingly condemned the military coup and called for the immediate release of all political detainees.

The UK government said on Tuesday that it is “pursuing all levers” to guarantee a peaceful return to democracy in Myanmar, where the military declared a year-long state of emergency after taking control of the country and accusing leader Aung San Suu Kyi's party of fraud over its recent election victory.

“As to the UK response, we are pursuing all levers to ensure a peaceful return to democracy,” junior foreign minister Nigel Adams told Parliament.

Adams said that the UK government has gone from making representation at the highest level within Myanmar to encourage all sides to resolve disputes in a peaceful and legal manner, and urgently convening the UN Security Council to address the crisis, to reviewing all indirect support to the Asian country’s authorities with a view to cutting it.

“In light of the coup, the Foreign Secretary has today announced a review of all such indirect support to the Myanmar government, with a view to suspending it unless there are exceptional humanitarian reasons,” he said.

The minister of state also said that UK Foreign Minister, Dominic Raab, had a call scheduled for later this week with Aung San Suu Kyi, whose whereabouts are unknown since her detention, and is expecting the conversation go ahead as planned.

“We are clear in our demands that this call goes ahead, and we hope it will serve as an opportunity to confirm her safety,” Adams stressed.

The UK foreign ministry official said that he is planning to speak to representatives of the Association of the Southeast Asian Nations and China to seek regional support for the restoration of the principles of democracy and constitutional government to the people of Myanmar.

"The United Kingdom considers the election result to credibly reflect the will of the people and that Aung San Suu Kyi's National League for Democracy party are the rightful winners of the election," Nigel Adams told parliament, as quoted by Reuters.

"There may be a reshuffle among chief ministers by appointing qualified ones," the source said.

Two Suzuki Auto Plants in Myanmar Stop Production After Military Coup, Reports Say
04:54 GMT 02.02.2021
Newsfeed
0
Access to the chat has been blocked for violating the rules . You will be able to participate again through:∞. If you do not agree with the blocking, please use the feedback form
The discussion is closed. You can participate in the discussion within 24 hours after the publication of the article.
To participate in the discussion
log in or register
loader
Chats
Заголовок открываемого материала