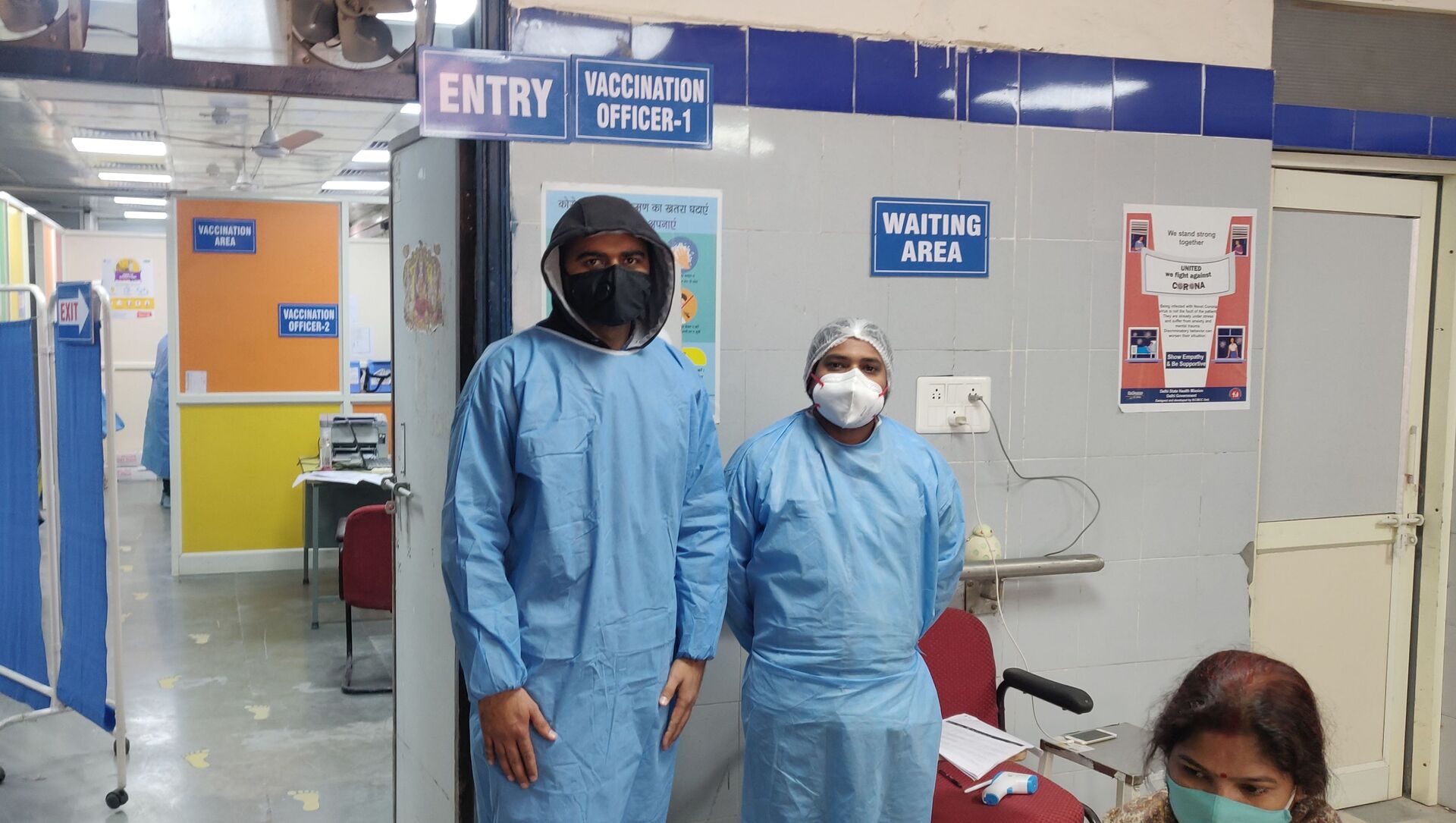 Deexa Khanduri
Sputnik correspondent
All materials
India’s vaccination drive was launched on 16 January. The first phase of the programme is targeting 30 million health workers, followed by policemen, soldiers, civic and other frontline workers. The government plans to vaccinate 300 million people by early August.

Prime Minister Narendra Modi recently said that India’s COVID-19 vaccination programme is turning out to be an example to the rest of the world, as he revealed that three million people have already been vaccinated since the end of January.

Hailing the start of the vaccine programme as a proud moment for India, he asserted: “It shows the world our capability.”

Sputnik tried to look at how such a gargantuan feat is being accomplished for more than 1.3 billion people despite the various hurdles which usually exist in such an endeavour.

One of the three million to have received a vaccine was HIV positive Shyama Kumari (named changed), who was inoculated at Delhi’s Guru Gobind Singh Government Hospital recently.

Sputnik talked to her the day she was vaccinated which she said she was receiving “voluntarily”.

“I was supposed to receive the jab on 18 January. However, I refused it at that time. I wasn’t sure,” she said.

HIV patient Shyama Kumari (name changed) receiving the first dose of Covishield. The second dose will be given 28 days after the first dose
© Sputnik / Deexa Khanduri

“When most of my colleagues got safely vaccinated, I considered speaking to the doctors. I told them about my condition, and they assured me that I could safely take the vaccine,” she added.

Dr Arnab Pramanik, attending to Kumari, said that the vaccine is safe for HIV patients too, as long as they are healthy and fit.

India has had the second-highest number of COVID-19 infections in the world, after the US. Since the outbreak of the pandemic, India has confirmed more than 10.5 million cases and more than 150,000 deaths.

As India’s vaccination drive started in mid-January, only about 56 percent of those who are eligible for the jab have come forward in the first week.

​The numbers, however, started improving in the second week and the rate of recipients jumped to 61 percent.

Speaking about the turnout, Vyshakh Nag, an officer on special duty for COVID-19 vaccination and security, told Sputnik: “On the first day of the vaccination drive, the turnout rate was low. However, it’s gradually improving. People are gaining confidence now.”

He added: "The first week was testing for all of us. We didn’t know how people would respond. Now, we know how to respond to people’s queries. Moreover, the data itself is enough to tell the story. On 27 January, a total of 957 people (87 percent turnout) in West Delhi got vaccinated."

"Only two people complained of adverse effects," said Nag, who is in charge of 11 vaccination centres in West Delhi.

As of now, one centre is vaccinating 100 people every day. It means, in West Delhi, the government was expecting to vaccinate 1,100 Covid-19 warriors and only 957 turned up. “It’s not mandatory for people to take the vaccine,” he said.

According to Nag, the most challenging task is to handle the rumour mill.

“People do want the vaccine, but negative news spreads like wildfire. Even one fake rumour on WhatsApp causes ripples of anxiety,” he said.

Speaking about the potential adverse effects of the vaccine, Nag said: “After vaccinating, we observe the patient for the next 30 minutes. If anyone develops any allergy or side-effect because of the vaccine, it will be seen within 30-minutes of inoculation.

Dr Ram Asare, who is in charge of the entire vaccination process at Deendayal Upadhyay hospital, said: “Most of the complaints being reported are of nervousness or fever.

“These symptoms cannot be counted as adverse cases. People are a little sceptical regarding the vaccine. Hence, they are overthinking which is leading to nervousness or palpitation,” Dr Asare added.

India’s drugs regulator, the Drug Controller General of India (DCGI) has given emergency approval to two vaccines - Covishield that has been developed by AstraZeneca with Oxford University and Covaxin, developed by local firm Bharat Biotech.

The second phase of vaccination will include people aged above 50 and anyone under 50 with severe underlying health conditions.

A 29-year-old frontline worker told Sputnik on condition of anonymity: “I was asked to take the vaccine on 18 January. But after knowing that it will be Covaxin, I didn’t turn up.”

In Delhi, the turnout rate for Covaxin still remains as low as 30 percent.

In West Delhi, Covaxin is available at only one vaccination centre — ESI Hospital, Basaidar.

On 27 January, only 27 of the 100 healthcare workers registered to be given the vaccine, turned up. Most of them have concerns that the hospital is only offering Covaxin.

Commenting on the low turnout for Covaxin, Nag said: “Although no adverse cases have been reported because of Covaxin in my area so far, convincing people still remains a challenge.”

Some doctors stressed that a confidence-boosting exercise about the vaccines’ advantages is needed.

“To build trust among people the government must come out with the data, evidence of the trials, and encourage free and fair discussions,” Dr Adarsh Pratap Singh, a member of the Resident Doctors Association at the All India Institute of Medical Sciences, New Delhi, suggested.

Krishna Ella, the Bharat Biotech’s chairman, earlier this month said that the company carried out “200 percent honest clinical trials” with universal clinical practice guidelines and all regulatory provisions that apply to clinical trials in India.

Seeing the backlash from the sections of doctors, Bharat Biotech published its first phase report in the Lancet Infectious Disease Journal on 22 January.

According to medical journal Lancet, interim findings from the Phase 1 trial of Covaxin (BBV152) showed that the vaccine was well received by all dose groups with no vaccine-related adverse effects.

Further, to speed up the immunisation drive, Delhi has increased the number of its vaccination centres from 81 to 101 from 1 February onwards.

The government has also increased the number of vaccination days per week from four to six. India recorded the highest number of inoculations in 15 days.

The United States took 18 days, and the UK 36 days to vaccinate the same number of people.