Political Persecution? How US Dems Are Cracking Down on Trump & His Conservative Supporters 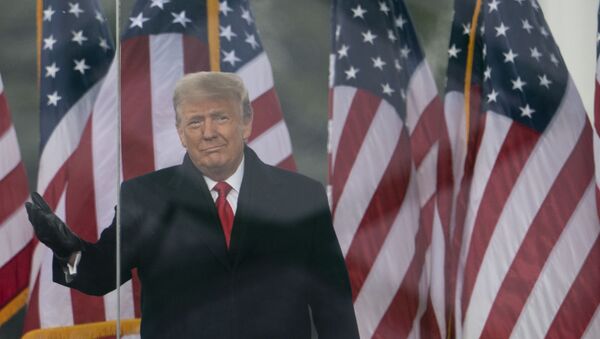 © AP Photo / Evan Vucci
Subscribe
International
India
Africa
Ekaterina Blinova
All materialsWrite to the author
Having taken control over the White House, the House of Representatives and even the Senate in the aftermath of the 2020 election, Democratic politicians appear to still be after private citizen Donald Trump and conservative social media users. A US lawyer known by his nom de plume Techno Fog on Twitter has shed light on Dems' apparent strategy.

Team Trump's legal battle over suspected voter fraud and the 6 January Capitol incident was followed by "purges" at the hands of Big Tech, with dozens of conservative users complaining over their slashed number of followers and suspended accounts including those of Donald Trump, his former National Security Adviser Michael Flynn, former federal prosecutor Sidney Powell, and many others.

In what appeared to be a coordinated action, Apple, Google and Amazon wiped conservative media platform Parler out of the internet, claiming that it posed "a very real risk to public safety". On 21 January, House Oversight Chair Carolyn Maloney (D-NY) wrote a letter to FBI Director Christopher Wray urging him to "conduct a robust examination of the role that the social media site Parler played in the assault" on the Capitol.

Are Dems Seeking to 'Shut Down' the Conservatives?

Parler signalled that it "welcomes" Maloney's call for conducting a thorough investigation into the platform's role in "policies and actions": "Like other social-media platforms, we have been cooperating and will continue to cooperate with law-enforcement efforts to identify and prosecute those individuals responsible for organising and carrying out the shameless 6 January attack on the Capitol," Parler Chief Operating Office Jeffrey Wernick said in an official statement last week.

Meanwhile, House Oversight Committee Republicans highlighted on 25 January that a potential FBI investigation into Parler's "role" in the Capitol protests, "should include" Facebook and Twitter who, according to the lawmakers, could equally be seen as "facilitators of the January 6 riot".

"They don't go after Parler because of what went down on 6 January. The event and the chaos were mostly planned on other platforms such as Facebook – which is an ally of the Democrats. But the media and Congressional Democrats only target Parler. Why is that? It’s because they want to shut down conservatives and competition. It’s about power and control,” suggests a US lawyer known by the alias Techno Fog on Twitter.

Techno Fog, who has provided detailed analyses of General Flynn's case, a FISA warrant debacle and Special Counsel Robert Mueller's "Trump-Russia" investigation on Twitter over the past few years, has outlined apparent methods which could be used by the Democratic Party, FBI and DOJ officials in their effort to persecute pro-Trump conservatives.

"We saw it with the Mueller investigation and Democrat lies that members of the Trump campaign and administration colluded with Russia," the lawyer notes, adding that he/she expects Congressional hearings and other efforts to investigate and suppress conservative press and social media.

Any records concerning the matter and obtained by Democrats are likely to be leaked to the press before any scrupulous examination, the Twitter user suggests, referring to the media leaks of Christopher Steele's now-debunked dossier in 2016 and a 2017 US media campaign over General Michael Flynn's talks with Russian Ambassador Sergey Kislyak.

Likewise, the lawyer does not expect a fair game on the part of the FBI, given that most of the bureau's operatives who participated in spying and the "framing" of Trump aides, leaking classified information, and securing FISA warrants with critical errors were left unpunished. Thus, Kevin Clinesmith, an ex-FBI lawyer who falsified a claim made to sustain government surveillance of Carter Page, got just 12 months probation, 400 hours of community service, and a $100 fee despite government prosecutors having insisted on putting him behind bars for several months.

​Democrats may also come up with a legislation criminalising "hate speech" and "disinformation" on social media, suggests the lawyer, not ruling out that the case of Douglass Mackey, aka Ricky Vaughn, 31, who was recently charged with conspiring with others to "defraud citizens of their right to vote" for tweeting in 2016 that one can vote for Hillary Clinton via a text message on social media, could potentially be used as a legal precedent.

The DOJ just announced the man behind that account, Douglass Mackey, has been charged with election interference stemming from actions in 2016 pic.twitter.com/WS5Eh6UIv4

​The charges brought against Mackey on 27 January 2021 by the DOJ were denounced as "ridiculous" by Andrew McCarthy, former Assistant United States Attorney for the Southern District of New York in his latest article for National Review.

For his part, Norman Pattis, an American trial lawyer, deems that the case is no laughing matter, suggesting in his blog that it has all the earmarks of political prosecution. "More shocking is that this prosecution, a felony charge carrying a term of imprisonment of up to ten years, was not apparently presented to a grand jury," Pattis adds. 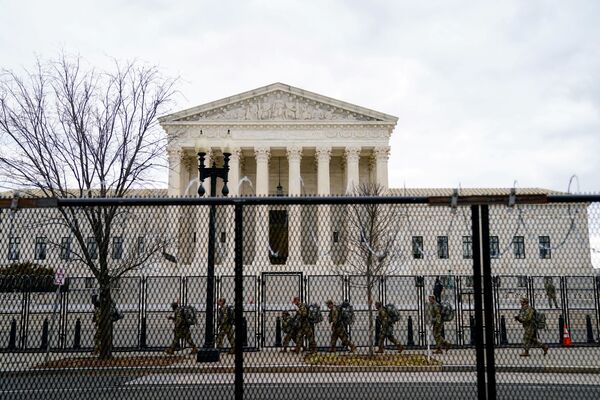 Meanwhile, the Dems are also pushing ahead with Donald Trump's impeachment trial despite legal arguments that impeaching a private citizen is completely unconstitutional. Democrats don't conceal the fact that they want to impeach the departed president so that he will not be able to throw his hat in the ring of the 2024 race, as House Speaker Nancy Pelosi revealed during her 10 January interview on CBS 60 Minutes.

Interesting how freely the term "insurrection" is thrown around nowadays when if you observed last summer that avowed anarchist revolutionaries who wanted to overthrow the state were engaging in something like "insurrectionary" activity, you were denounced as a white supremacist

​Harvard Law School professor emeritus Alan Dershowitz, who defended Trump during his first impeachment, argued in his 20 January opinion article for The Wall Street Journal that the Senate "should dismiss the article of impeachment against [the ex-president] for lack of jurisdiction".

He also rebuked a group of 170 constitutional scholars who wrote an open letter supporting the second impeachment trial, suggesting that they were guided by nothing less than political bias and anti-Trump sentiment.

On 26 January, Republican Senator Rand Paul made an attempt to force a vote on the constitutionality of the impeachment trial which was killed (55-45) as five GOP senators, namely Mitt Romney of Utah, Ben Sasse of Nebraska, Susan Collins of Maine, Lisa Murkowski of Alaska and Pat Toomey of Pennsylvania, joined the Democrats.

55-45 vote against Rand Paul's motion that the impeachment is unconstitutional because Trump is no longer in office. Senate Minority Leader McConnell voted with Paul.

​Apparently, the Supreme Court could have sorted things out and shed light on the constitutionality of the Senate trial, but it remained mute, with Chief Justice John Roberts declining to preside over it, given that Trump is no longer a president. Roberts’ seat will be filled by Senate president pro tempore Patrick Leahy (D-Vt.).

If today’s Senate vote is any sign, the Democrats’ ridiculous impeachment of former President Trump will fail—again—by a long shot. Dead on arrival.

Good for @RandPaul and the 45 GOP Senators for standing up.

​"Any appeal of the impeachment to the Supreme Court would likely be unsuccessful", says Techno Fog. "The Supreme Court likely sees this issue as one for Congress to handle. The Roberts Court is hesitant to intrude on Congressional matters, and has kicked other issues, such as litigation on the emoluments clause, down the road so that they don't have to make a final decision".

While @CBSnews has learned Homeland Security does not have intelligence about specific, credible plotting, the bulletin warns more violence is possible + new federal riot charges allege “communications + coordination” among suspects as early as November pic.twitter.com/dQKB3uv8v8

​While Trump's impeachment trial over "inciting an insurrection" will begin the week of 8 February, the Department of Homeland Security issued a national terrorism bulletin on 27 January, warning that "some ideologically-motivated violent extremists with objections to the exercise of governmental authority and the presidential transition, as well as other perceived grievances fuelled by false narratives, could continue to mobilise to incite or commit violence" following the 6 January Capitol protests.