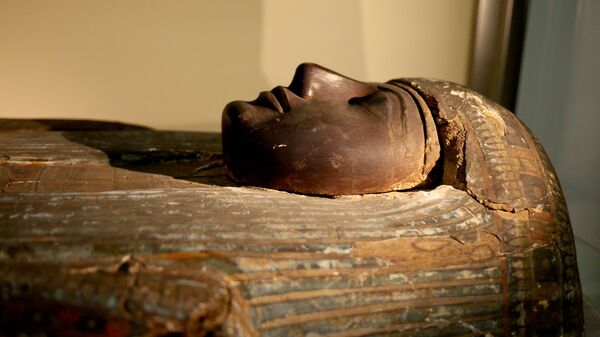 Svetlana Ekimenko
All materialsWrite to the author
Excavations at the Temple of Taposiris Magna, about 45 kilometers to the west of Alexandria, have been headed by Dominican lawyer Kathleen Martínez, who is convinced Cleopatra’s tomb might be found there, as only a small fraction of the vast site has been explored.

A spate of remarkable new finds have been revealed by the Egyptian-Dominican mission of Santo Domingo University, headed by Dr. Kathleen Martinez, during archaeological excavations at the Tabosiris Magna Temple in western Alexandria, Egypt,  according to the officials of the mission and the administration of the Alexandria Antiquities Zone.

​16 stone-carved burials carved into the rock, in the style of wall burial openings, were uncovered in the process, and despite several mummies purportedly in a poor state of preservation, the discovered artefacts all bear testimony to the typical characteristics of mummification in Greco-Roman antiquity. The great temple, of which only the impressive outside walls remain today, was once a key cult centre of the gods Osiris and Isis.

Archaeological finds discovered on site have shown that the temple of Taposiris Magna had a unique combination of both Egyptian and Greek temple architecture.

Tongue-shaped gold foil amulets had been placed in the mouths of the discovered mummies, in a ritual believed to ensure that the deceased be able to speak in the other world. Two mummies were also found to have preserved the remains of scrolls and parts of the cartonnage layer.

One mummy, according to the archaeologists, has remnants of gilding that depict Osiris, the Ancient Egyptian god of the dead. 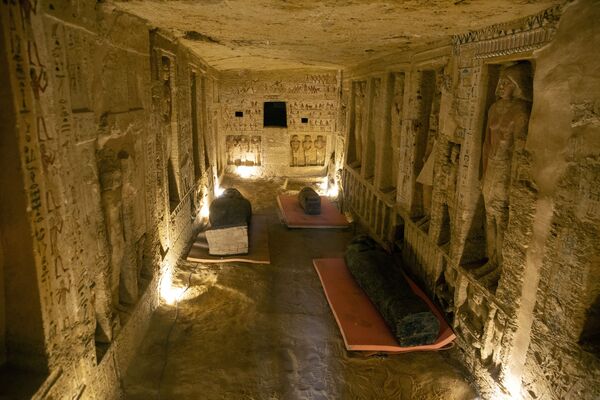 Looking back at the past season, Khaled Abu Al-Hamd, director-general of Alexandria Antiquities, said the mission had amassed numerous noteworthy archaeological finds at the temple, the foundation panels of which suggest it was erected under King Ptolemy IV.

Especially singled out were a woman’s funeral mask, eight golden flakes, and eight marble masks dating back to classical antiquity.

The items found by the mission in the last 10 years have changed the popular perception of the Temple of Tabosiris Magna, where coins bearing the name and image of Queen Cleopatra VII were found.

Kathleen Martinez, a lawyer, archaeologist, and diplomat from the Dominican Republic, is best known for her work since 2005 in search for the tomb of Cleopatra - the last ruler of the Ptolemaic Kingdom of Egypt, and one the most famous of all pharaohs.

Martinez has spent years trying to find Cleopatra’s tomb and she is convinced it lies in the ancient temple site of Taposiris Magna.

Archaeologists from Egypt and the Dominican Republic began excavating the temple in 2002, discovering 27 tombs and 10 mummies as part of their ongoing search.

The excavation work also uncovered 200 royal coins, believed to depict Cleopatra’s face, and the remains of two high-status Egyptians, imbuing archaeologists with hope that the mystery of the tomb of the fabled queen, immortalised over thousands of years, might finally be revealed one day.