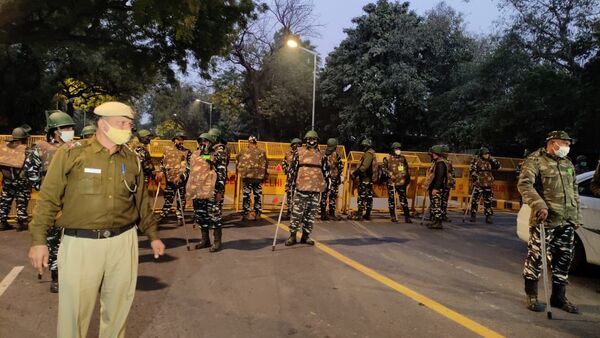 © Sputnik
Subscribe
International
India
Africa
Dhairya Maheshwari
All materials
A lesser-known group, Jaish-ul-Hind, has claimed responsibility for a blast next to the Israeli Embassy in New Delhi on Friday. The Improvised Explosive Device (IED) detonation led to three vehicles parked nearby being damaged, and was the second time since 2012 that Tel Aviv’s New Delhi mission has been targeted.

Israel's Ambassador to India Ron Malka has said that he wasn't surprised at the "evil" terrorist attack at the Israeli Embassy in New Delhi on Friday evening, as Israeli authorities had received intelligence inputs on a possible strike over the last few weeks.

In an interview to Indian news agency Press Trust of India (PTI), Malka also stated that Tel Aviv won't be too intimidated to let the ongoing peace talks in West Asia be affected by Fridays’ blast, which Israel says was an “attempted terrorist attack”.

"These attacks by those seeking destabilisation in the (West Asia) region cannot stop us or scare us. Our peace efforts will continue uninterrupted," Malka told Press Trust of India (PTI).

The Israeli diplomat was responding to a question if the attack could have been linked to the normalisation of ties between Israel and the United Arab Emirates (UAE) and Bahrain last year.

The Abraham Accords, as the normalisation process is known, were brokered by the Donald Trump administration and mark the first time since 1994 that a Gulf state has opened full diplomatic ties with the Jewish state.

Iran lambasted the Gulf states for signing peace deals with Israel, as it has warned them that they would be responsible for any “instability” in the region.

“Bahrain’s shameful move sacrifices the Palestinian cause and decades of struggle ... at the expense of the US election,” a statement from Iran’s foreign ministry said last year.

World
New Delhi Blast Outside Israeli Embassy Reportedly Prompts Mossad Involvement
Speculations over possible Iranian involvement in the blast at the Israeli Embassy have gained ground after an envelope found at the site was reported to have the names of slain Quds Force commander Qasem Soleimani and top nuclear scientist Mohsen Fakhrizadeh, the two Iranian heavyweights assassinated in January and November 2020, respectively. Tehran has repeatedly vowed to avenge Soleimani, who was killed in a US drone strike, and Fakhrizadeh, whose assassination it has blamed on Tel Aviv, which has not commented on the accusations.

Iran, in turn, has vehemently rejected any involvement in the Friday explosion in Delhi.

Meanwhile, a relatively unknown terrorist group, Jaish-ul-Hind, has already claimed responsibility for the blast, something which is being looked into by Indian security services.

For his part, the Israeli diplomat said that he would let the investigation into the matter conclude before blaming any party for the explosion.

“Eventually, I think we will understand it all, and the picture will be clear and we will get to know who is behind this evil attack," said Malka.

The Indian police are scrutinising the travel history of all incoming Iranian nationals to the country over the last few weeks over the Friday attack.

Malka further informed the Indian news agency that several lines of investigation were being pursued by the Indian investigative agencies, and that Tel Aviv was providing “whatever assistance we can provide and whatever we can share”.

The diplomat underlined that even a possible link to the 2012 bomb blast was being looked at, referring to the planting of a magnetic bomb under the car of the Israeli military attaché in New Delhi. The Israeli official’s wife was injured in the explosion, which Israel has squarely blamed on Iran. Tehran has denied the charge.

Friday's blast took place on the day when India and Israel were celebrating the 29th anniversary of establishing full diplomatic relations.

Security for Israeli Nationals Beefed Up

Meanwhile, the security of Israeli nationals across India has been stepped up after the attack.

“We have intensified patrolling in the areas, including, Mcleodganj & Dharamkot with Israeli population,” a police official from India’s Himachal Pradesh state was quoted as saying by ANI news agency on Monday.

Certain tourist pockets of Himachal Pradesh have a high  concentration of Israeli backpackers and tourists.

Amid fears expressed over the security of Israelis in the country, Malka issued a message on Saturday that Tel Aviv had full faith in the Indian agencies’ ability to provide security in the country.