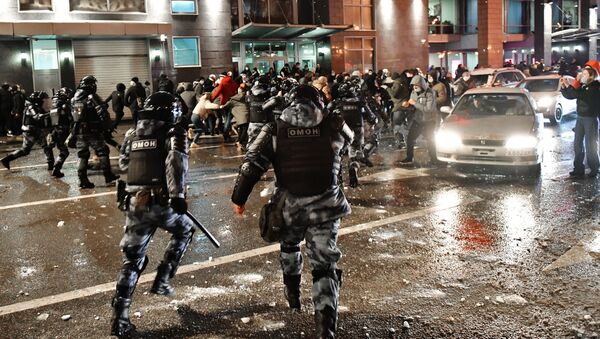 MOSCOW (Sputnik) - The Russian Interior Ministry on Saturday called on citizens to refrain from participating in unauthorised protests scheduled for 31 January, reminding that disturbers of law and order will be liable to prosecution.

"The Russian Interior Ministry urges citizens to avoid taking part in unauthorized events. Under the current conditions, there is a growing risk of provocations by their organizers and active participants aimed at undermining public order," ministerial spokesperson Irina Volk told reporters.

The spokesperson mentioned that disturbers of law and order at unauthorised protests would be detained and prosecuted.

"We emphasise that some Russian regions still have restrictions against the spread of the coronavirus disease in place, including those related to public events. In light of that, calls and participation in unauthorised events are violations of the law and entail administrative, and, in some cases, criminal liability," Volk added.

On January 23, multiple unauthorised protests took place across Russia, instigated by supporters of Russian opposition figure Alexey Navalny. Similar protests are said to be planned for this Sunday.