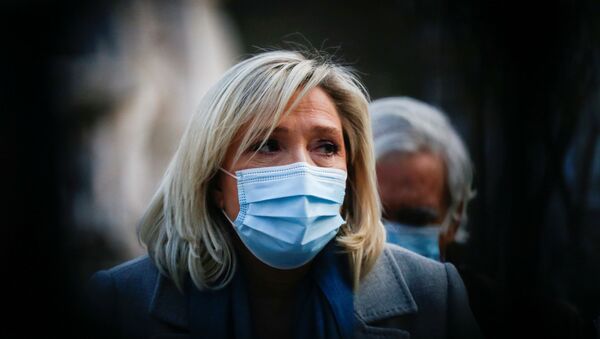 Aleksandra Serebriakova
Moscow-based Sputnik correspondent specializing in foreign affairs.
All materialsWrite to the author
France is preparing to hold presidential elections in April 2022 that will probably see harsh competition between incumbent President Emanuel Macron and his 2017 rival Marine Le Pen. Four years ago, the President of the National Rally decisively lost to Macron in the second round.

French politician and presidential candidate Marine Le Pen proposed to ban “Islamist ideologies” during a press conference on Friday, the plan that would also include a restriction on hijab-wearing in all public places, France 24 reports.

The 52-year-old politician, who leads France’s National Rally party, told reporters that Muslim headscarves should be considered “an Islamist item of clothing”, as she unveiled a plan to outlaw “totalitarian and murderous” ideologies related to Islamic fundamentalism.

Her words come after an online poll from Harris Interactive published on Wednesday suggested that if the final run-off of French presidential elections, currently scheduled for April 2022, were held today, Le Pen would gain 48% of the votes in comparison to Macron’s 52% - the most support the conservative politician has had in the past years.

The survey was conducted among 1,403 people over 18 years of age, the majority of which are registered electoral voters.

In 2017, the National Rally president received 7.6 million votes in comparison to Marcon’s 8.6 million in the first round of the presidential election. However, no candidate managed to gain 50% support to be proclaimed the French president. In the runoff election, Le Pen lost to Marcon with only 34% of the vote. 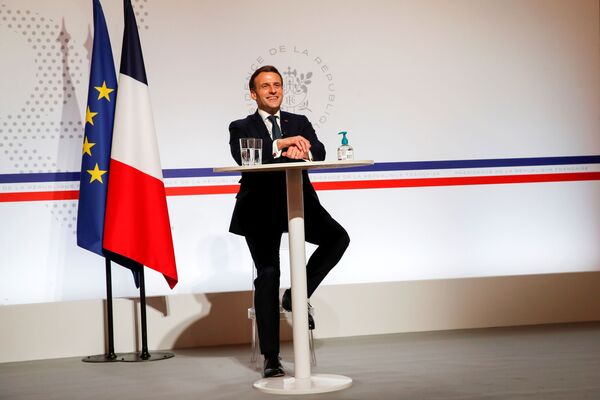 French President Emmanuel Macron speaks via video with Founder and Executive Chairman of the World Economic Forum (WEF) Klaus Schwab during the WEF of the Davos Agenda, at the Elysee Palace in Paris, France January 26, 2021
© REUTERS / POOL

But Le Pen’s anti-immigration rhetoric received a new wave of attention last year following the death of French teacher Samuel Paty, who was brutally beheaded in October 2020 by an Islamist terrorist of Chechen origin. The act was inspired by Paty’s decision to show his students caricatures of Islamic prophet Muhammad during a freedom of expression class. The cartoons in question were first published in Charlie Hebdo magazine in 2012, generating profound condemnation throughout the Islamic world, which considers them blasphemous. Several years later, 12 people were killed and many more injured in a shooting attack at Charlie Hebdo headquarters in Paris by terrorists claiming their allegiance to al-Qaeda*.

Following the teacher’s murder in October, Macron slammed “a typical Islamist terrorist attack”, while hailing Paty as a “quiet hero” Paty who “incarnated the Republic” and “was killed for teaching children freedom of speech”. But the president’s position has produced a reverse reaction from Muslim leaders around the world, including Turkish President Recep Tayyip Erdogan, who called the state of Macron’s mental health into question. 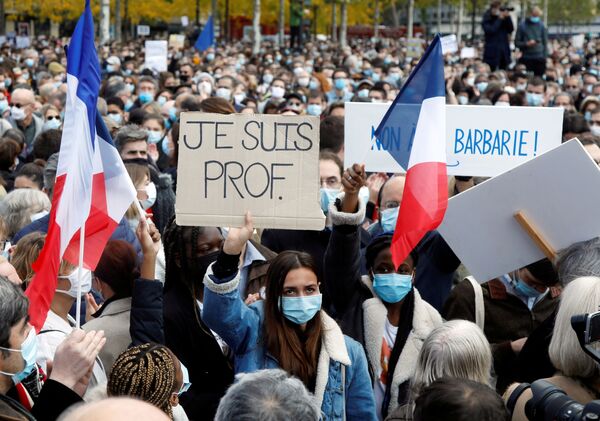 People gather at the Place de la Republique in Paris, to pay tribute to Samuel Paty, the French teacher who was beheaded on the streets of the Paris suburb of Conflans-Sainte-Honorine, France, October 18, 2020. Placard reads "I am a teacher". REUTERS/Charles Platiau
© CHARLES PLATIAU

Just two weeks after Paty’s killing, three people were stabbed to death in the French city of Nice by a Tunisian man. One of the victims, an elderly woman, was partially beheaded during the attack that was carried out at the premises of local Notre-Dame basilica. The attack, deemed terrorist, was blamed on Islamic extremism by French authorities.

In 2011, France became the first country in Europe to prohibit the full-face coverings in public places, including Islamic burqas and niqabs. Seven years prior to that, France also introduced a ban on headscarves and other "conspicuous" religious symbols at public schools in line with secular state laws. These measures have sparked an array of debates and legal challenges from public, who argued that they had undermined individual rights to freedom of expression.

*al-Qaeda, a terrorist group banned in Russia and a number of other countries.