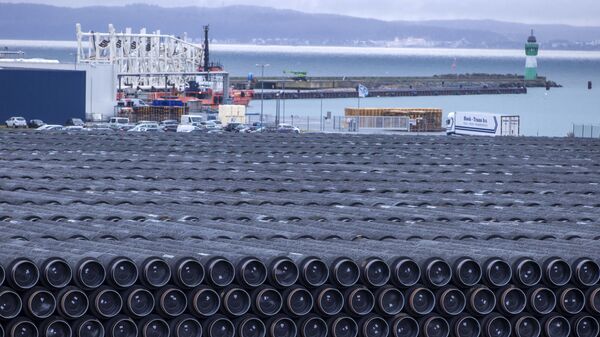 Ilya Tsukanov
All materialsWrite to the author
Gerhard Schroeder served as German chancellor between 1998 and 2005, and was a strong advocate of the original Nord Stream natural gas pipeline project. After leaving office, the SPD politician became chairman of the board of Nord Stream AG.

Nord Stream 2 will ensure German energy security for “generations” to come, and Berlin must not allow itself to be pressured by Washington on its energy policy, former Chancellor Gerhard Schroeder has said.

“If American policy is going to determine how we carry out our energy policy, where will this lead? The US cannot dictate to us – without having its own interests in mind – on what gas we use. Of course, they want to sell their own fracking gas to Germany. However, it is not environmentally friendly, is expense and of poorer quality than pipeline gas,” the retired politician told Rheinischen Post in an interview.

Schroeder urged Berlin to see Nord Stream 2 through to completion, suggesting that “if we stop construction, then from the point of view of our energy policy we will be cutting the branch on which we are sitting.” According to Schroeder, the infrastructure project “must serve to ensure the energy security of future generations,” particularly in light of Berlin’s strategy of phasing out coal and nuclear power, which requires vast quantities of alternative sources of energy for the industrial economy.

Biden Believes Nord Stream 2 Pipeline Bad Deal for Europe, WH Says
The 76-year-old former chancellor is well-known for his outspoken remarks on the need for Germany and Europe to be more politically independent from the United States. Earlier this week, he said that he would like the German-US partnership under Joe Biden to be based “on an equal footing” because “Germany is not America’s 51st state.” During Trump’s presidency, he blasted the US over its attempts to pressure Berlin economically and meddle in its internal affairs, and warned Washington that Berlin was “not a banana republic.”

Nord Stream 2 is a $10.5 billion, 1,230 km pipeline project running from Vyborg, Russia to Greifswald, Germany along the bottom of the Baltic Sea. Once completed, the energy megaproject will double Nord Stream’s capacity, allowing Russia to export up to 110 billion cubic meters of gas to Germany annually. Along with Russia’s Gazprom, Germany’s Uniper and Wintershall, Austria’s OMV, France’s Engie and the Anglo-Dutch oil concern Shell are partners in the project.

Washington has attempted to torpedo Nord Stream 2’s construction on multiple occasions, pressuring participant nations and sanctioning the project in late 2019 and then again in late 2020. The first round of sanctions led to work on the project being suspended with about 165 km left to build. The sanctions introduced last month led some insurers, engineering firms and certifiers to pull out amid fears of US retaliation, but failed to stop construction, which is expected to be completed by the summer.